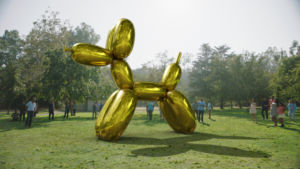 Since his first solo exhibition in 1980, Koons’s work has been shown in major galleries and institutions throughout the world. His work was the subject of a major exhibition organized by the Whitney Museum of American Art, “Jeff Koons: A Retrospective” (June 27 – October 19, 2014), which traveled to the Centre Pompidou Paris (November 26, 2014 – April 27, 2015) and the Guggenheim Bilbao (June 9 – September 27, 2015). An exhibition of works by Marcel Duchamp and Jeff Koons was on view at the Museo Jumex in Mexico City through September 2019. “Jeff Koons: Absolute Value from the Collection of Marie and Jose Mugrabi” is now on view at the Tel Aviv Museum of Art.

Jeff Koons, Balloon Dog (Orange) (1994 – 2000), at Tel Aviv Museum of Art, 2020 | Image courtesy of Elad Sarig
Koons is widely known for his iconic sculptures “Rabbit” and “Balloon Dog” as well as the monumental floral sculpture “Puppy” (1992), shown at Rockefeller Center and permanently installed at the Guggenheim Bilbao. Another floral sculpture, “Split-Rocker” (2000), previously installed at the Papal Palace in Avignon, Château de Versailles, and Fondation Beyeler in Basel, was most recently on view at Rockefeller Center in 2014.