A War on ‘Collective Memory’: A Sober Report Reveals the Extent of the Damage to War-Torn Cultural Sites in Yemen

A War on ‘Collective Memory’: A Sober Report Reveals the Extent of the Damage to War-Torn Cultural Sites in Yemen 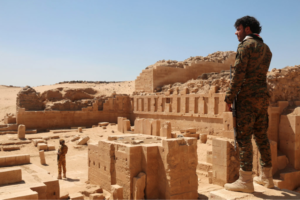 A heart-wrenching new report has revealed the extent of the destruction of archeological sites and cultural heritage in war-torn Yemen. The human rights group behind the report is now calling on the international community to intervene in defense of Yemen’s imperiled “collective memory.”

The document, which was released last Thursday by the organization Mwatana for Human Rights, lists 34 sites—some up to 3,000 years old—that have suffered severe damage. Titled “The Degradation of History,” the survey is built on eyewitness reports from 75 people who were working at the heritage sites when they sustained attacks and airstrikes during the four-year-long conflict. Pointedly, the date of the report’s publication aligns with the 73rd anniversary of UNESCO, the international agency that seeks to preserve cultural heritage. …Read More

Pictured: Yemeni tribesmen from the Popular Resistance Committees, who supports forces loyal to the Saudi-backed Yemen president, walk around the Awwam Temple area, also known as Mahram Bilqis, in the province of Marib, northeast of the country. Photo: ABDULLAH AL-QADRY/AFP/Getty Images.