In 2018 the sculpture Africa’s Fearless Thinker took a stand at RMB’s Think Precinct in Sandton. Now, two years later, she is also taking pride of place at the Portside building, home to RMB’s Cape Town office. 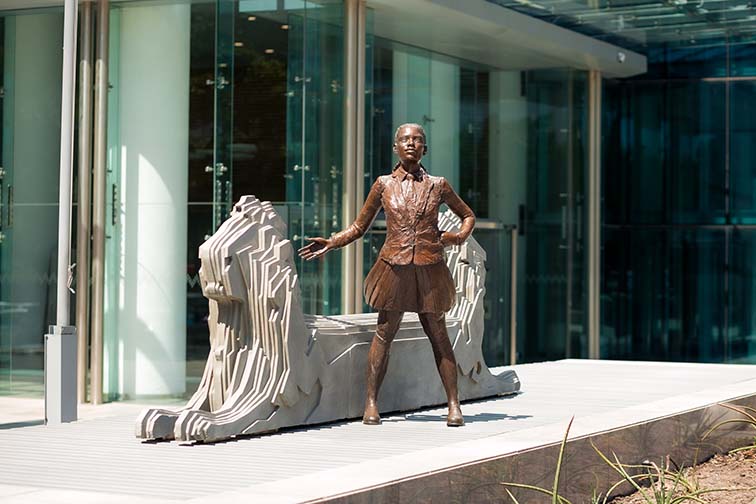 Inspired by the iconic Fearless Girl statue by Kristen Visbal, which took its place on Wall Street in 2017, RMB envisioned a life-sized and Afro-centric version of the artwork that would speak to the values of collaboration, courage and strength. Prince Albert-based artist Marieke Prinsloo-Rowe’s concept depicting a quintessentially African Fearless Thinker walking collaboratively alongside a contemporary concrete male lion (which is a reference to the RMB brand’s ‘Lion and Key’ logo), captured this vision. The work, which debuted at the 2018 RMB Turbine Art Fair, is an inspiring, functional (the lion doubles up as a bench) and engaging artwork to be enjoyed by RMB and all its visitors.

Says RMB Executive Director based in Cape Town, Carel Vosloo: “Our Africa’s Fearless Thinker, alongside the lion, serves as a constant reminder to staff and our clients to have courage, stay curious and relentlessly question the status quo. Coupled with a collaborative mindset, fearless thinking can unlock the collective wisdom to support our clients and the broader society to find opportunity in adversity. RMB values the notion that ideas should bring about actual change and tangible outcomes – and it’s these that we look to develop in partnership with our clients across sectors and territories,” he says.

RMB’s Athena initiative: Towards equality in the workplace
Africa’s Fearless Thinker also complements RMB’s gender equality initiative Athena, through which RMB works towards creating an environment where women feel they are empowered to achieve their individual career goals.

Africa’s Fearless Thinker takes her rightful place alongside the male lion, reiterating one of Athena’s key principles of not having to “man up” to have a successful career at RMB. Athena is, however, not a women’s conversation. Instead it is a business imperative with the clear agenda to focus on both men and women and the collaborative diversity they offer. This makes Africa’s Fearless Thinker a beacon of hope to young women in Africa – encouraging them to lead in their own authentic way.

“RMB wants to create a workplace where everyone, irrespective of gender, can thrive and achieve success in their careers,” says RMB’s Inclusion and Equality Specialist Dharsni Padayachee. “It is unbelievable how a sculpture can encapsulate so much and with such beautiful simplicity. For me, Africa’s Fearless Thinker demonstrates some key characteristics for success – optimism, courage, and resilience to deal with challenges that might come her way, and focus and tenacity to pursue her goals with loads of positive energy.” 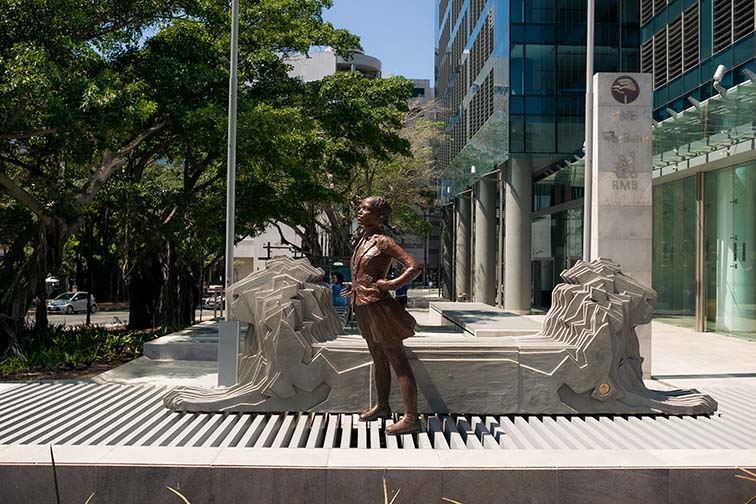 Art captures the spirit of the time
When RMB invests in the arts, it is also investing in the lives of young artists and communities and contributing towards the growth of the overall creative economy. When it comes to transformation in the workplace, art can be a leading factor in how a company and its workforce communicates. The company believes that arts, culture and creativity can contribute to a strengthened economy. More importantly, they can capture the spirit of the time, transform lives and bind together not only hearts and souls, but entire societies and nations. Having a corporate art collection on-site helps to reflect the culture of the company in an unspoken way. For example, Africa’s Fearless Thinker expresses how courage, diversity and gender equality are valued and embraced. RMB employees and clients have always had easy access to the palpable energy that original creativity exudes. Artworks are generously displayed across workspaces and outside areas, for all to engage.

Extending her reach
Africa’s Fearless Thinker hasalso recently taken pride of place at the St. Stithians Girls’ College in Johannesburg, where she provides a space for thinking, creative dialogue and contemplation on the campus.

RMB also plans to extend her presence to some of its offices across Africa in the next few years. RMB believes that everywhere she goes, Africa’s Fearless Thinker will serve as a visual reminder of an environment where all people are encouraged to fearlessly reach their potential; at the same time taking the equality conversation into society as well.