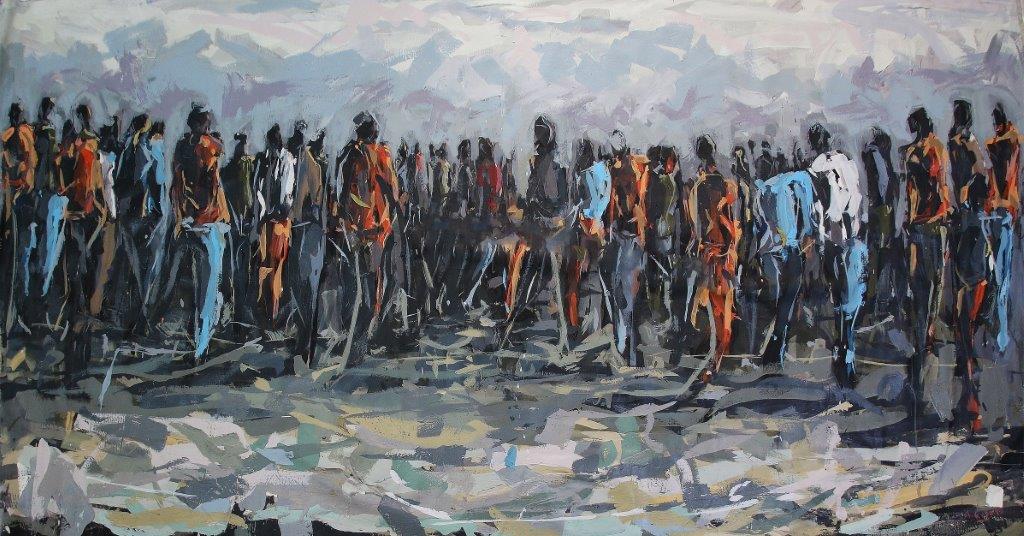 Asanda Kupa | Where the wind goes, they followed, 2019 | Acrylic on canvas

When we first started discussing Asanda Kupa’s solo show, we could not have known how resonant his pieces would be when they came to be exhibited towards the end of March 2020. The world and the contexts in which we can access art has so drastically changed, but what remains is art’s pertinence and poignancy. Art has the capacity to be reframed, re-understood, and reinterpreted, and still remain relevant and true to intent despite the different scenarios we come to it within. Kupa’s latest body of work that follows up from his previous solo Unlearn, my Soul which was the first solo exhibition hosted at Eclectica Contemporary when it opened in 2016. As the exhibition opened, its title Relearn, my soul took on a new meaning, as South Africa shutdown and a process of relearning began for us all. 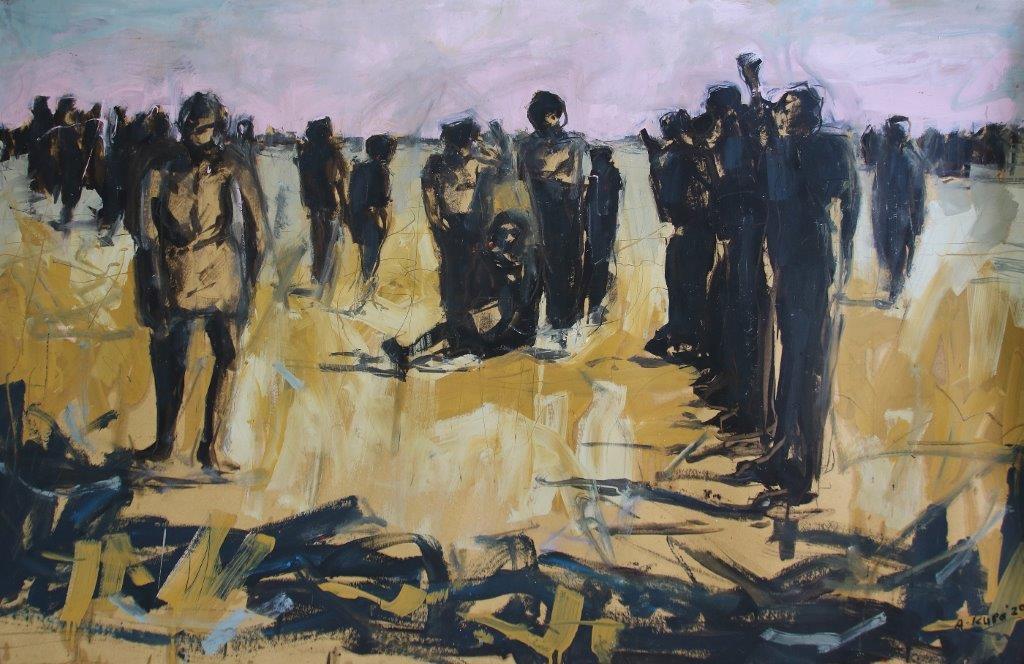 In July last year, Kupa moved out of his communal studio at The Bag Factory, to a remote farm in the north of Johannesburg. This was the beginning of the process that led to the creation of the works for Relearn, my Soul. He explains: “isolation at that time for me meant introspection and a chance to search within”. Now, as we are invited to engage with his works within our own isolation, the pieces feel resonant and charged through this shared experience. Kupa’s distinctive crowd scenes feature once more in this exhibition, within them he engages the recurrent theme of shared movement, impassioned dynamism and communal experience. In the spiritual gathering of people, closeness and sharing is visually evident and yet this is not uniform throughout the works. This representation is readily picked up in the canvas pieces Alitshoni unaphakade and Where the wind goes, they followed and yet across his works on card, a more distanced and isolated theme begins to reveal itself. From Umonakalo ezweni, where clusters of groups of people are dispersed across an unfamiliar landscape, to the final addition to the show: Untitled (Afrika, your time is now), where a singular figure comes to the fore of the frame, as other figures are singled out, seemingly centred if viewed from different perspectives. He explains that “I use crowds as a symbol of oneness, that everything is connected and all is one’. 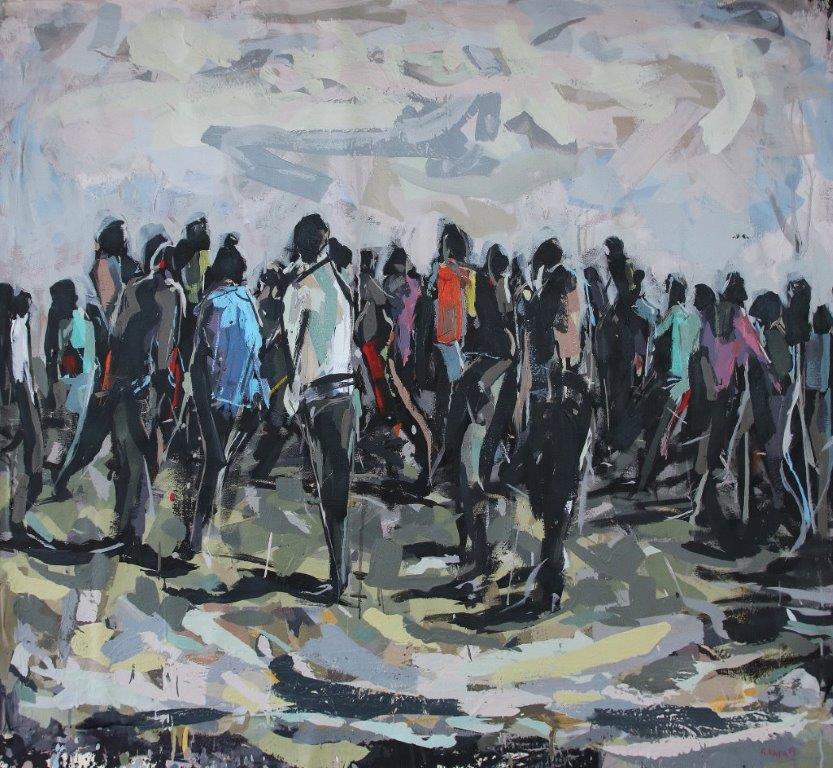 When working with acrylics, the heavy impasto of colours depict a togetherness which now looks alien, even though the lockdown in our country and the ‘new norm’ is little more than a month old. The works, their busyness, frenetic energy, and charged closeness, now feel somehow nostalgic – they have become reminiscent of a period in time which feels lost. And yet, layered into the pieces and Kupa’s practice is the constant reminder of the different realities faced by different people across South Africa, while for some the crowds appear distant, for others they remain in the present and reminders of contemporary existence. Some say it only takes two weeks to form or break a habit – perhaps as we become more familiar with these new, changed or continuing realities the possibilities for relearning are revealed. Will hugs with strangers, communal gatherings and space-sharing ever be the same again? Perhaps what is becoming clearer is that this is a chance to treasure the things we took for granted and to reconsider our perspectives as individuals: to come forward, in support and togetherness against our common challenges.

Relearn, my soul is a culmination of a period of Kupa’s self-investigation. “The quiet and time alone gave me space to focus, I learned tight focus, and I appreciated life more because it became clearer to me, the things I wanted to say or do” explains Kupa. While the completion of the works and their presentation in the format of a solo exhibition demonstrates a certain finite point in their making, the themes explored continue to adapt and re-articulate themselves as we meet the works from different perspectives. When discussing his experience of the lockdown in South Africa, he described that “I believe my work has been done as a collective – because I share information as I go and we are sharing in this experience together. Bearing in mind the impact from all aspects of life, from difficulties to ease, I am choosing a more positive and productive take on this time, encouraged by shared information and social spirit.” 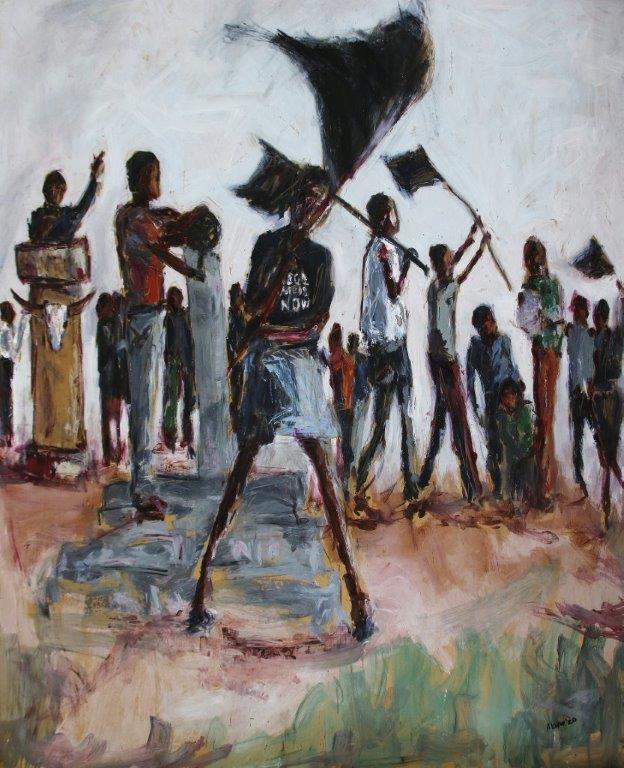 Relearn, my soul emerges from a space of fulfilment. Kupa delved into destruction, experienced messiness and reappears resolved and affirmed – having unlearned to relearn. When the pieces were first created, they visualised the results of an internal process, an introspective dialogue that Eclectica Contemporary and its visitors were invited into. As the exhibition has manifested within the new context and unexpected circumstances, new interpretations become possible and a relearning is encouraged, if not imperative, far beyond the stretches of canvas and card.