AT FEATURE: Diane McLean Mystery in the Everyday: Solo at the Prince Albert Gallery

AT FEATURE: Diane McLean Mystery in the Everyday: Solo at the Prince Albert Gallery 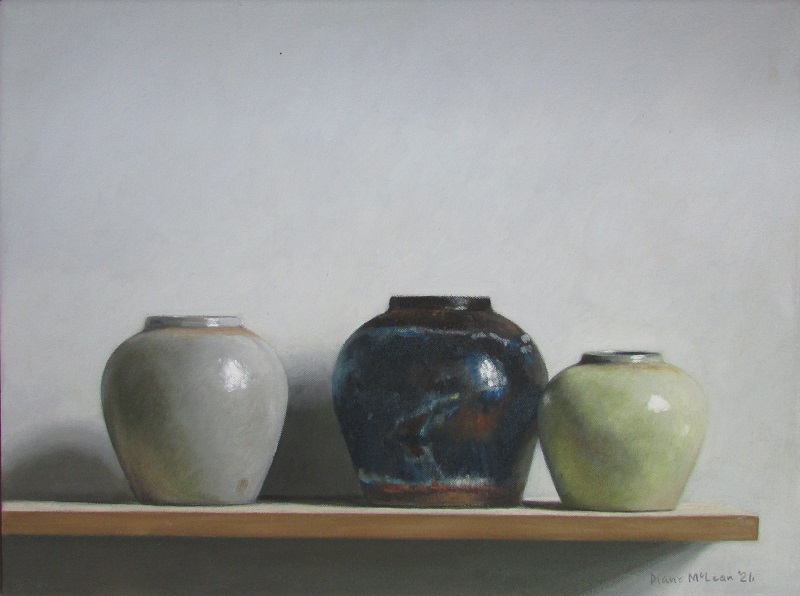 In Diane McLean’s spacious studio, a former mill, in De Rust in the Klein Karoo, she works on a
variety of subject matter from still lives to figures to landscapes, although it is mainly for her iconic
enamelware paintings that she has become known.

The latter paintings demonstrate a tactile quality which is so intense that it goes beyond mere
realistic rendering. Perhaps because of the centrality of these objects (of which she now has a huge
collection) in her oeuvre, possibly because of her ability to express both the coldness of the metal
and the warmth of the enamel, her combining and contrasting it with other objects with the
potential of being interpreted as a symbol rather than a mere object, it led her to creating a personal
mythology in which the seemingly mundane is elevated to something with sometimes deeply
emotional, historical, sociological or economic reference and depth … the discarded object of the
‘have’s” which become the collectible of the “have-nots”, the contrast of the “dead” object in the
form of an old enamel dish containing the handful of eggs, symbol of life, of nourishment, in its
“belly”. This spiritual dimension in her genre paintings is what separates her from those who imitate
her in terms of subject matter and style. It reminds one that style can be immensely empty when
this ‘other’ dimension is absent. Combining her enamelware with animals or birds, e.g. the owl in its
wisdom, or a rabbit, animals which were often brought to her to be taken care of after they had
been injured, thus creating an intimacy between her and the animal, again strengthens the sense of
a deeper meaning than simply of objects put together to create an attractive still life. Very often
there is a sense of an awareness of the fragility and brevity of life, for example as when she includes
the skull of a young baboon or the shell of a little tortoise.

Underlying these thoughts are objects drawn with immaculate accuracy and understanding,
sensitivity to colour, tone and tonality, as well as compositional design, unity and balance. The
balance here refers to both what is visually visible in its concrete form and what is suggested by its
reference to the times and histories it evokes. 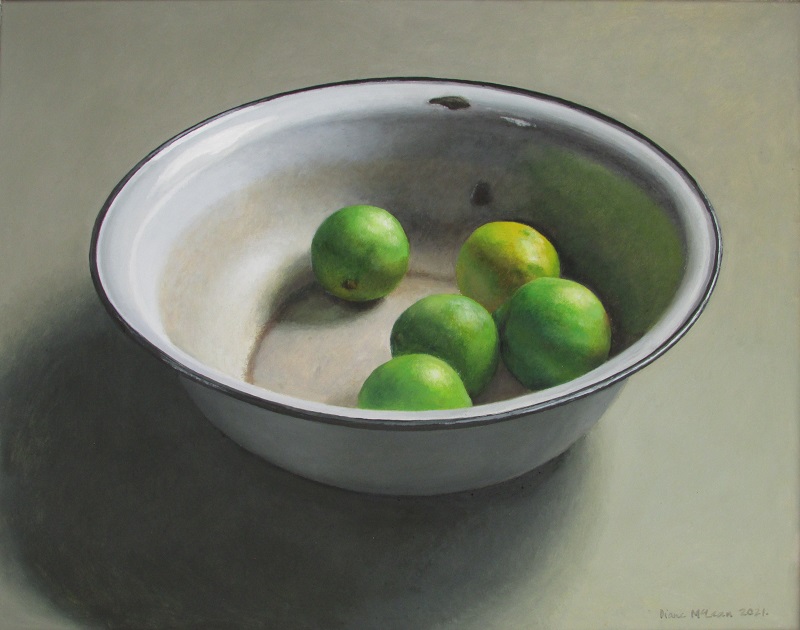 It is thus becomes understandable why this solo carries the title: mystery in the everyday.
However, it is not in the rendering of genre paintings that McLean has made her mark. She is also a
true master of the art of portraiture – in itself not unrelated to the discipline and exactness
demanded of genre painting. She approaches it with the same innate respect she affords the object.
Like in still life painting, the cool objectivity demanded by the rendering of the object, is balanced by
the empathy and warmth for the subject, the awareness of a personal history which often shaped
the history of others. Thus the sitter is never approached without an underlying suggestion of the
human drama which hides behind even the most austere and formidable sitter. 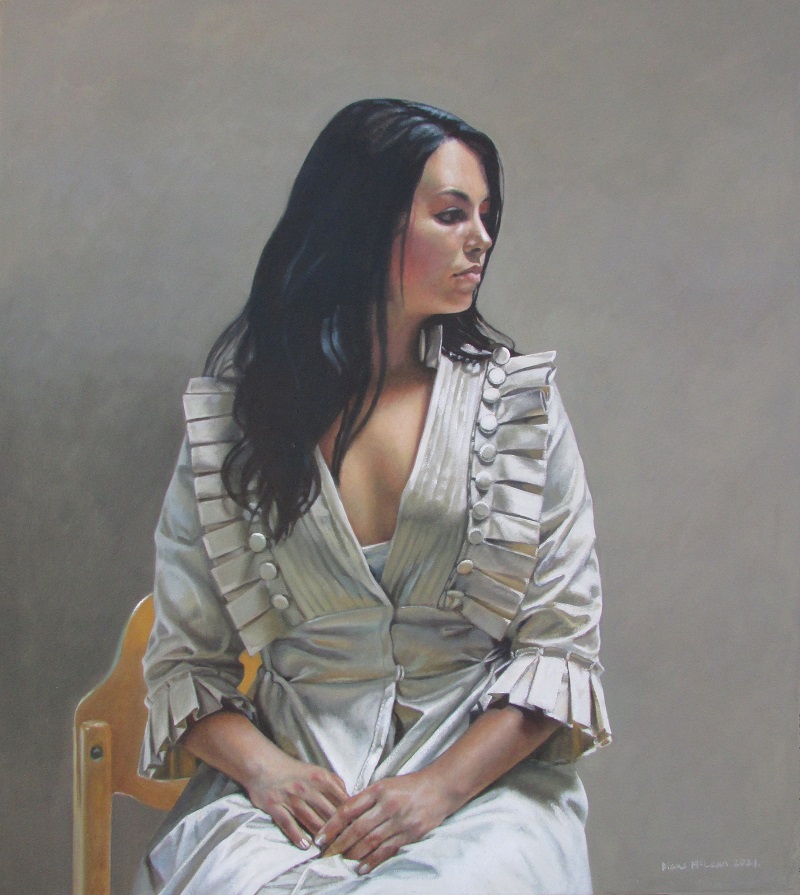 Whilst never failing to create a strong likeness in her portraits, her portraits of family members and
friends allow for her to explore moments of tenderness or the split second when a sitter who is not
used to the role of model reveals his or her personality without being aware of it. Thus the dreamy
tenderness is revealed in “Girl with Dog”, the young woman self-consciously turning her profile to
the viewer revealing the withdrawnness of the shy sitter (Alex in satin tunic).
One of the striking qualities of her work seems to be the ability to handle and express different
textures, e.g. the pelt of the dog as compared to the skin of the girl’s hand, the starched satin quality
of the pleats in the young woman‘s dress.

In her landscapes she seems to feel more at liberty to use heightened colours, stronger linear
elements for example in the structuring of rocks which reveals her remarkably sensitive drawing
ability. And once again her sense of sculptural form, her strong feeling for compositional design and
her understanding of light as a source of revelation, as is present in her studio-bound work, come
forward as almost defining characteristics of her work. At the same time the mystery of history and
all that that history may suggest, is also prevalent in these landscapes, making them, while fully
realistic, also deeply romantic. 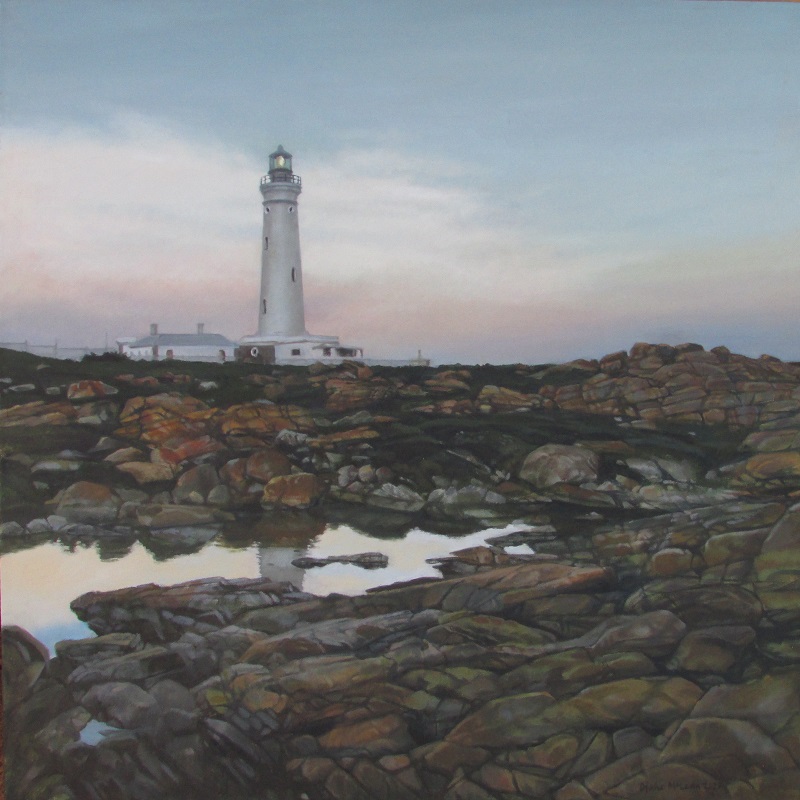 Certainly diverse in terms of subject matter, this exhibition hangs together through the artist’s
single-minded pursuit of suggesting a greater presence than that which merely touches the surface. 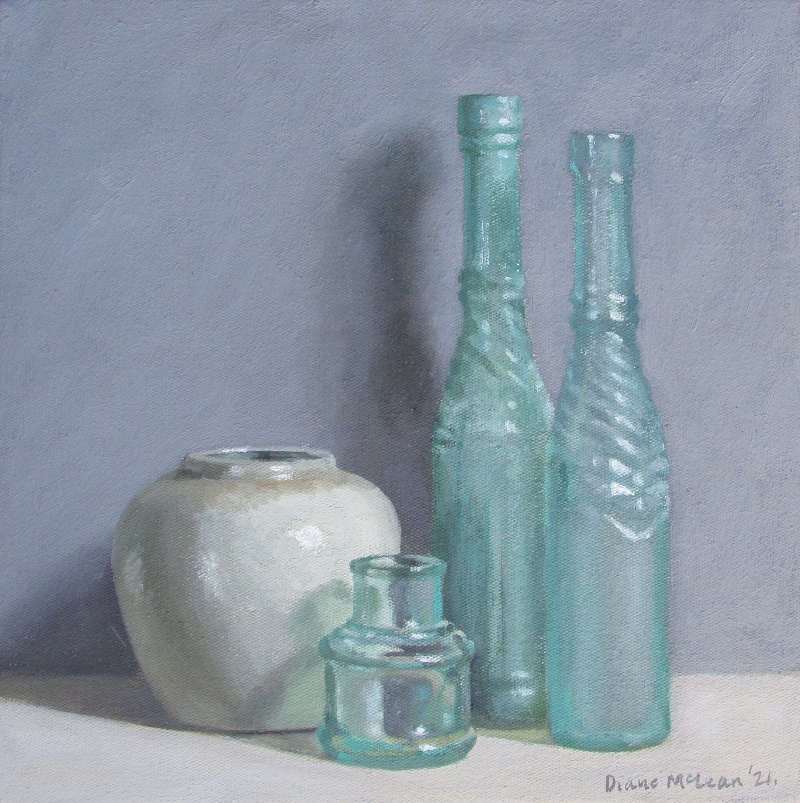 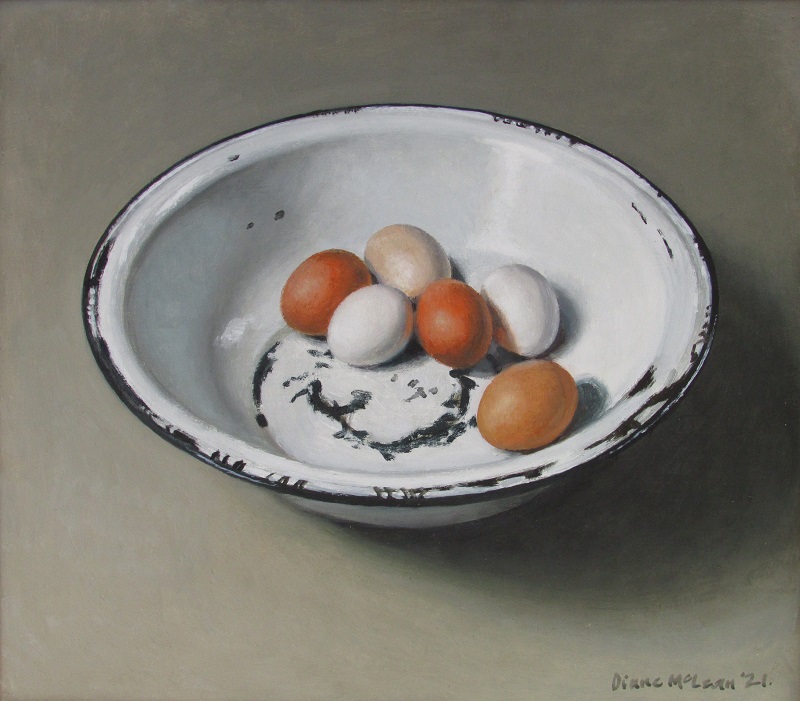