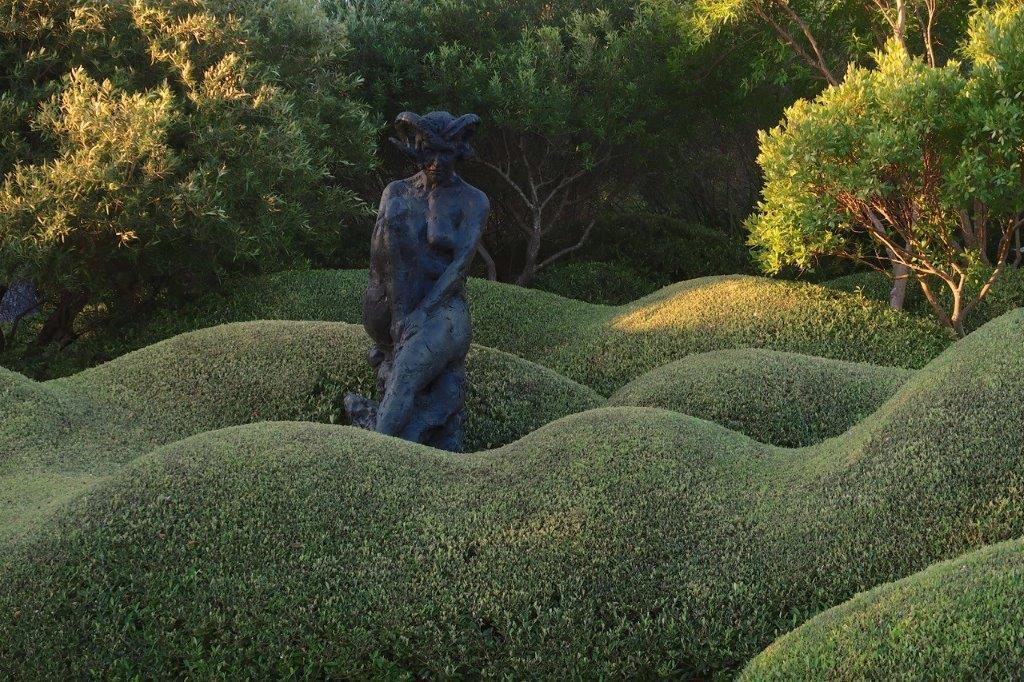 The Dylan Lewis Sculpture Garden on the outskirts of Stellenbosch has a new installation in the Grotto. Regular visitors to the garden will also notice a number of new works sited along the 3 km of paths in the Sculpture Garden, the remarkable 7-hectare open-air gallery that Lewis has created on the slopes of the Stellenbosch Mountains. The outdoor setting naturally lends itself to social distancing and visits are by appointment only, making it a safe space to view art during the pandemic.

The immersive journey of Dylan Lewis’s Grotto installation begins outside in the garden with a prologue. A subtle plaque embedded in the greenery contains a poem by Spanish poet Antonio Machado, describing an encounter with a handsome demon in the protagonist’s dreams. This demon asks the protagonist to journey into the ‘deep dungeon of the soul’. Opposite the inscription, one of Lewis’s masked shamanic figures – titled Male Trans-Figure II – beckons the viewer to follow a path through increasingly dense foliage towards the stone archway of the Grotto. One crosses this threshold into the earthy darkness of Lewis’s sculptural manifestation of the realm of the unconscious. 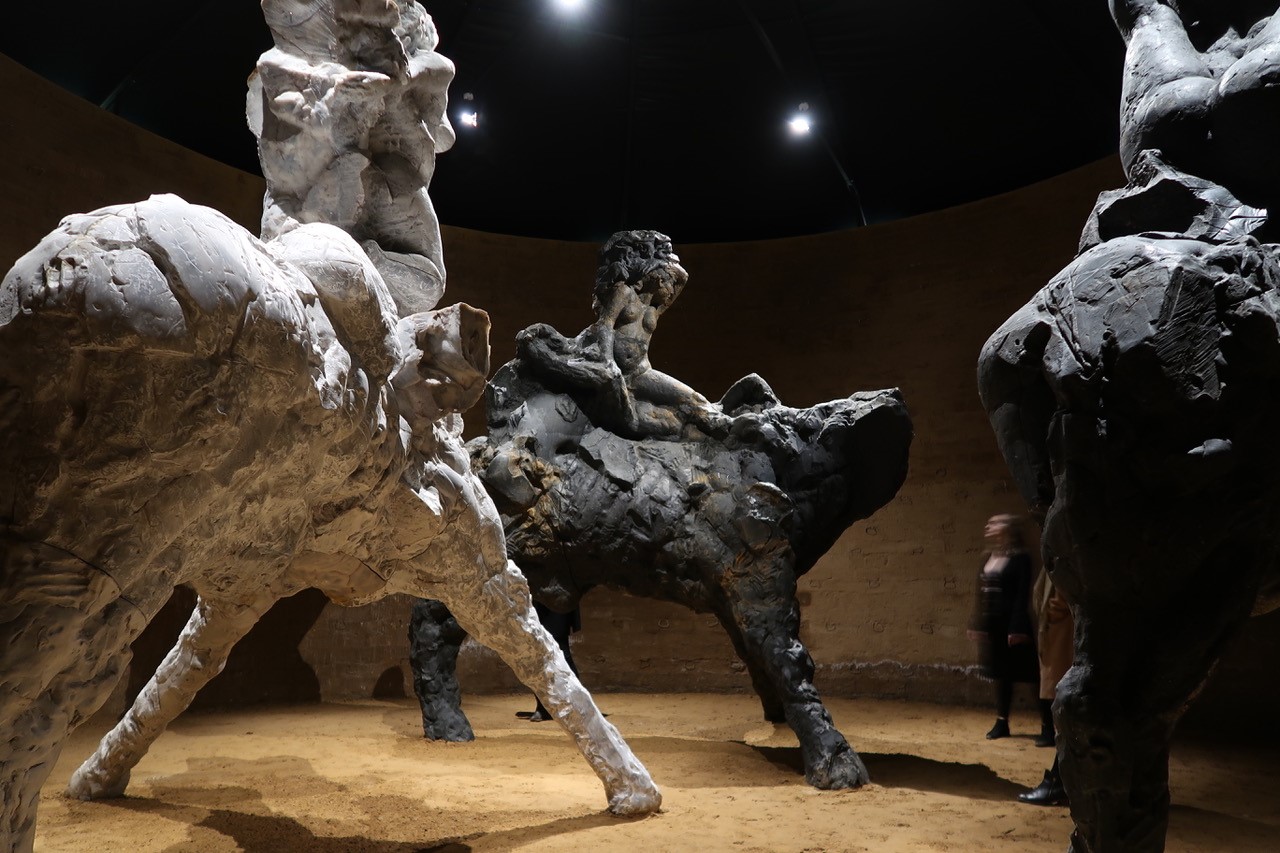 Lewis’s Grotto is a space of introspection, one that directly engages with the themes of individuation and embodied reconnection with nature and the instinctual. Sprawling yet confined, three of Lewis’s immense animalistic hybrid sculptures tower over the viewer in the shadows within.

This primal darkness is significant. Throughout humanity’s myths and folklore is the recurring theme of travelling into a dark and fearful place with the intent of confronting something wild or foreboding, and to be changed by the experience. In Joseph Campbell’s monomyth – which is a consolidation of the core structure of a vast number of diverse world myths – this is referred to as the hero’s journey into the ‘Belly of the Whale’. Carl Jung called this the chthonic portion of the psyche, a realm of darkness that must be confronted and incorporated if one is to achieve a true sense of self.

Interrelation X Monumental I, on the central lawns of the Dylan Lewis Sculpture Garden.

Central to this is a rejection of the ideas perpetuated by narratives such as the Biblical Fall and banishment from the Garden of Eden that the body is something dangerous that needs to be tamed or controlled by the mind.

The chthonic is where the instinctual parts of one’s psyche that are deemed negative or dangerous by the forces that shape development during childhood (be they familial, social, cultural or religious) are repressed in order to curate an ‘acceptable’ personality. They present themselves in dreams, in projections upon others, and in nature. The journey into the chthonic and the recognition and positive integration of these hidden elements are necessary to heal the fractured alienation that comes from this schism in the psyche.

Consequently, the inclusion of the three sculptures from the Beast with Two Backs series serves a crucial thematic purpose: to exemplify the psychic bliss of embodied consolidation with these vital instinctual forces.

Arising from an accident in the artist’s studio and taking on a life of their own, these three-legged hybrid figures can be seen to represent a spirited engagement with the reconciliation of the psyche’s agents. There is a sense of balance and wholeness in these works, but also one of power and vitality. They are an image of libido. Lewis’s masculine and feminine figures are depicted as actualised entities not just in the sense that they are fully articulated sculpturally, but also in the sense that they exist on a plane of mutual consenting desire, participation and intimate connection.

The sensuality of Lewis’s imagery corresponds to what Jung referred to as the anima (feminine within the masculine) and animus (masculine within the feminine), the repressed ‘other’ of these identities in an individual, depending on what the dominant archetype informing their outward personality is. Integrating these latent qualities within oneself is essential to achieving individuation.

While the literal translation of the anima/animus into unified syzygy naturally ties into the sexual – ‘Sexuality is of the greatest importance as the expression of the chthonic spirit,’ noted Jung – the form of libido that Lewis is seeking to celebrate can be expanded to a much wider expression of psychic wholeness and life force; a reconnection with what is lost when the body and the wild, instinctual nature are separated from the mind. This reconnection is the healing journey into the dungeon of the soul that the initial shamanic figure beckoned to the viewer to undergo.

Visits to the Dylan Lewis Sculpture Garden are by appointment Tuesday- Friday 09:00 – 17:00. Contact reservations@dylanart.co.za to make a booking.
www.dylanlewis.co.za 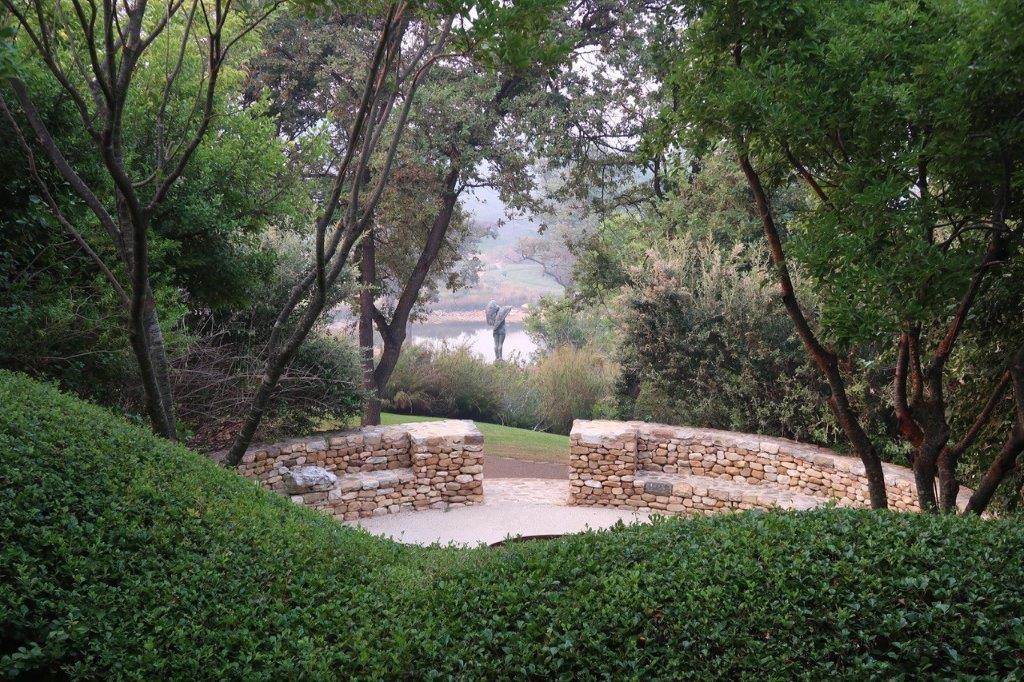 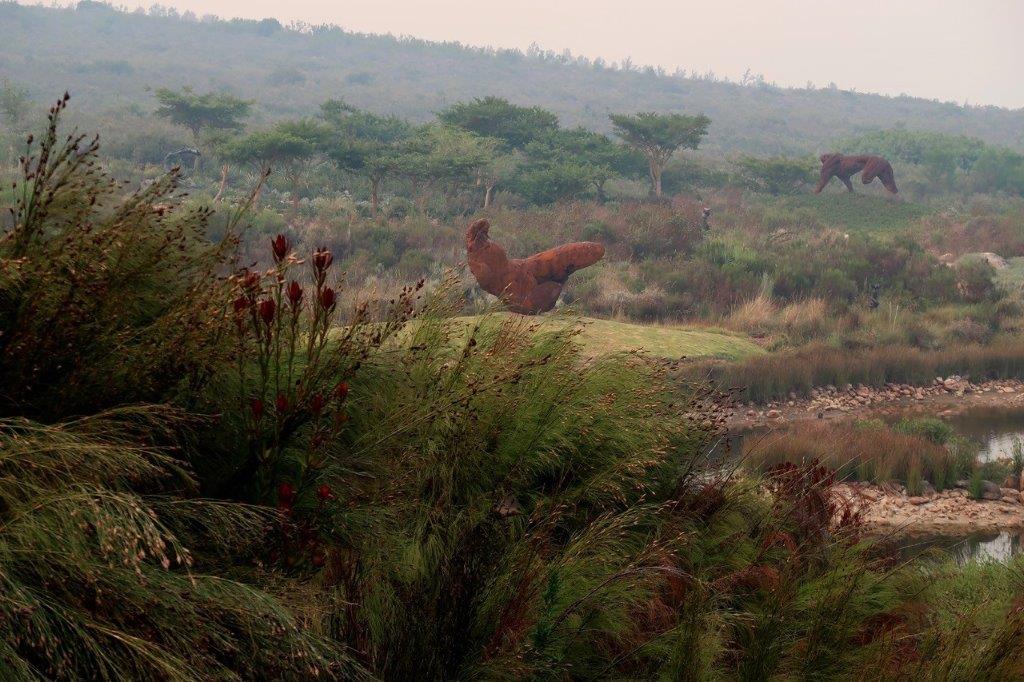