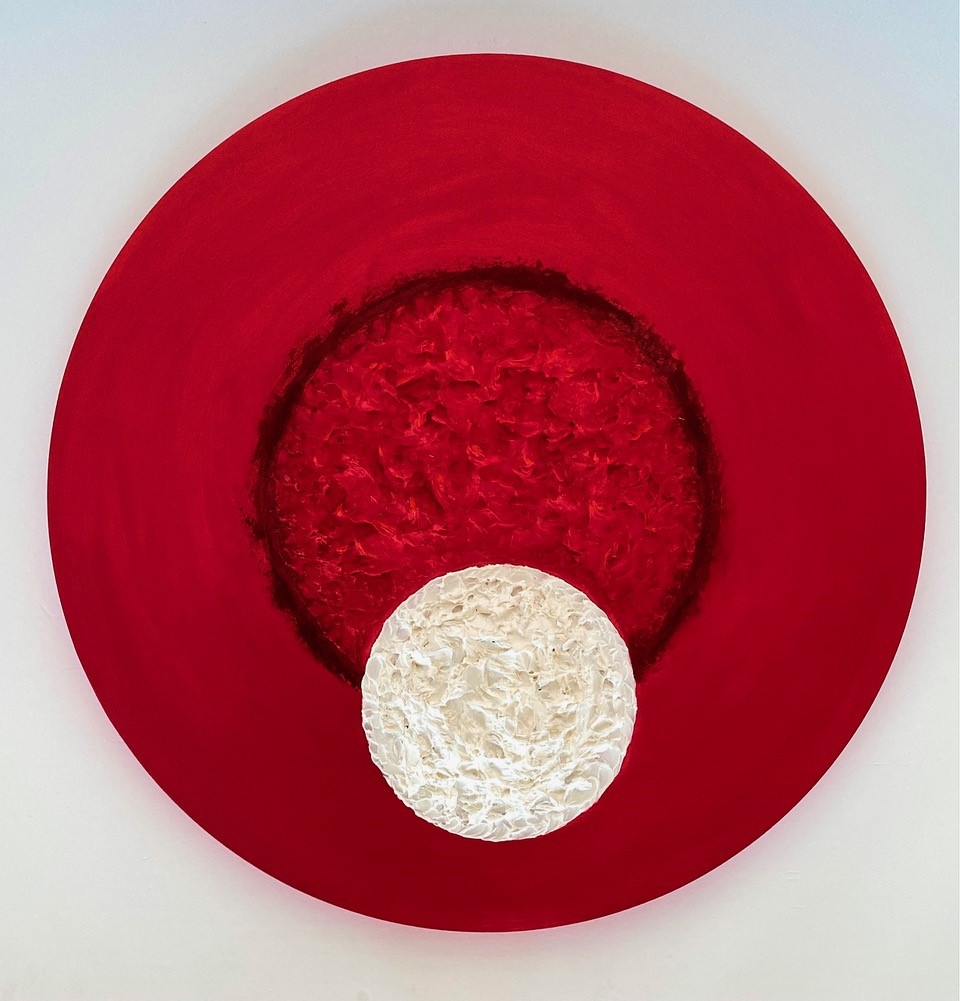 Let there be light, mixed media on canvas, 2021

If there is one lesson which our on-going pandemic has taught us it is humility. Isolation has forced us to re-evaluate the principle of being – why we live, to what end? Secularism – the basis of our modern age – has proven wanting, which is why, under lockdown, we find an accelerated interest in spirituality. The art world, too, is experiencing this shift. Indeed, I’d wager that today we cannot separate art and faith, that they are fast becoming inextricable in a changing world. If art, and the art world, over the past 121 years – comprising Modernism and our Contemporary moment – was considered a ‘religion for atheists’, it is now confronting a seismic shift in which creation and spirituality are bonded.

This is strikingly the case in the work of Shafina Jaffer, raised in Tanzania, the child of an Indian-African diaspora, currently based in Cape Town where she has opened the Jaffer Gallery. If Jaffer’s transcontinental identity is important, it is because it is a reminder that no finite origin can account for whom and what we are. In his great novel, The Bend in the River, V.S. Naipaul examines the lives of Indians in Africa, neither transient nor indigenous, whose being in the world forms a hybrid root, both here and elsewhere. Jaffer understands this peculiar sense of place, yet placelessness, which is why she also understands Naipaul’s conclusion that ‘we make ourselves according to the ideas we have of our possibilities’.

In Shafina Jaffer’s case – her position as an artist, art dealer, and a diasporic woman of colour – possibilities are realised in-and through an awareness of her hybrid origins. However, the ‘ideas and possibilities’ which Jaffer has inherited are not solely the result of a socio-political displacement – an Indian raised in Tanzania, now with a satellite location in South Africa – but also from an increased awareness that being is also defined by spirituality. Jaffer’s interest in God and Science is especially significant. That the synergy between the two is vital in her artmaking, and her broader professional and cultural practice, indicates the important shift I’m witnessing worldwide. If secularism, to survive, requires faith, it is because humanity is not only a democratic principle but a faith. 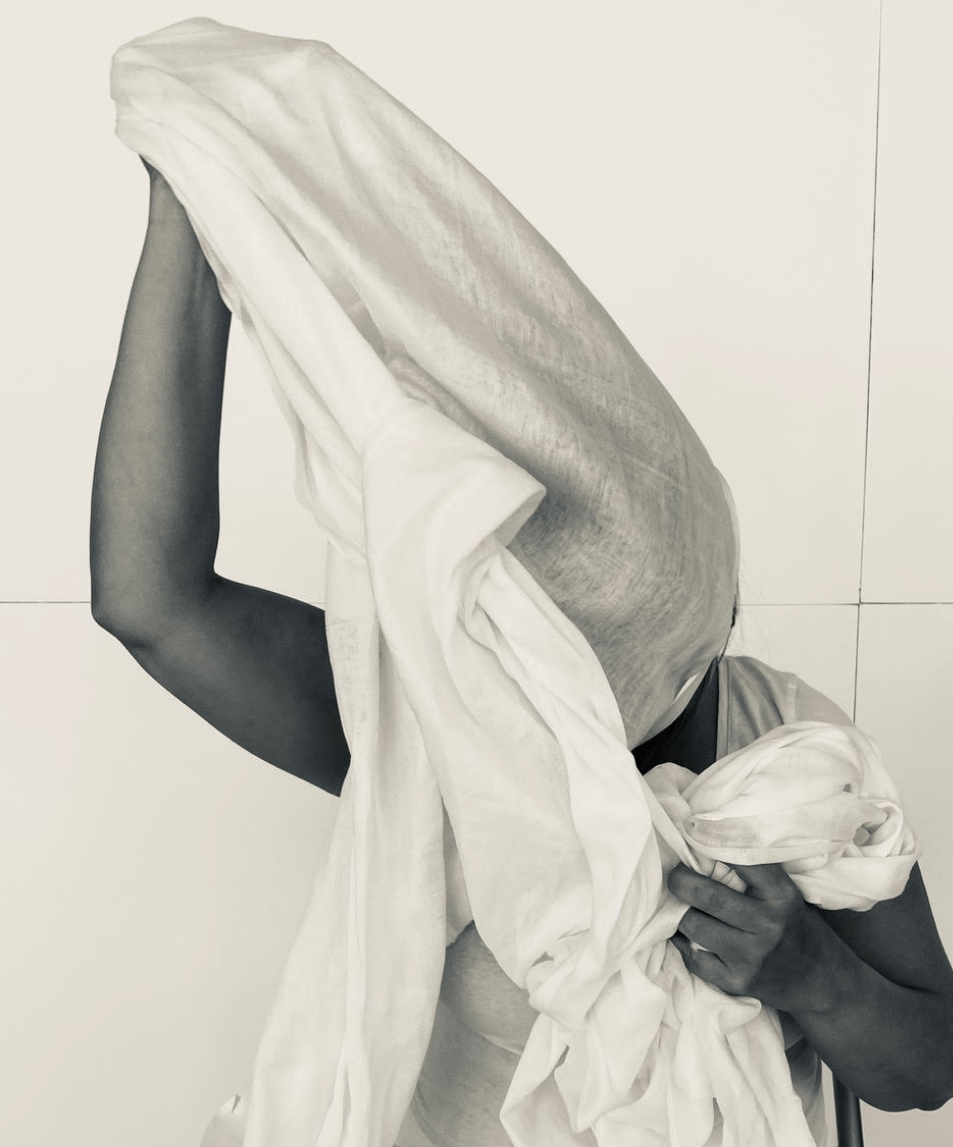 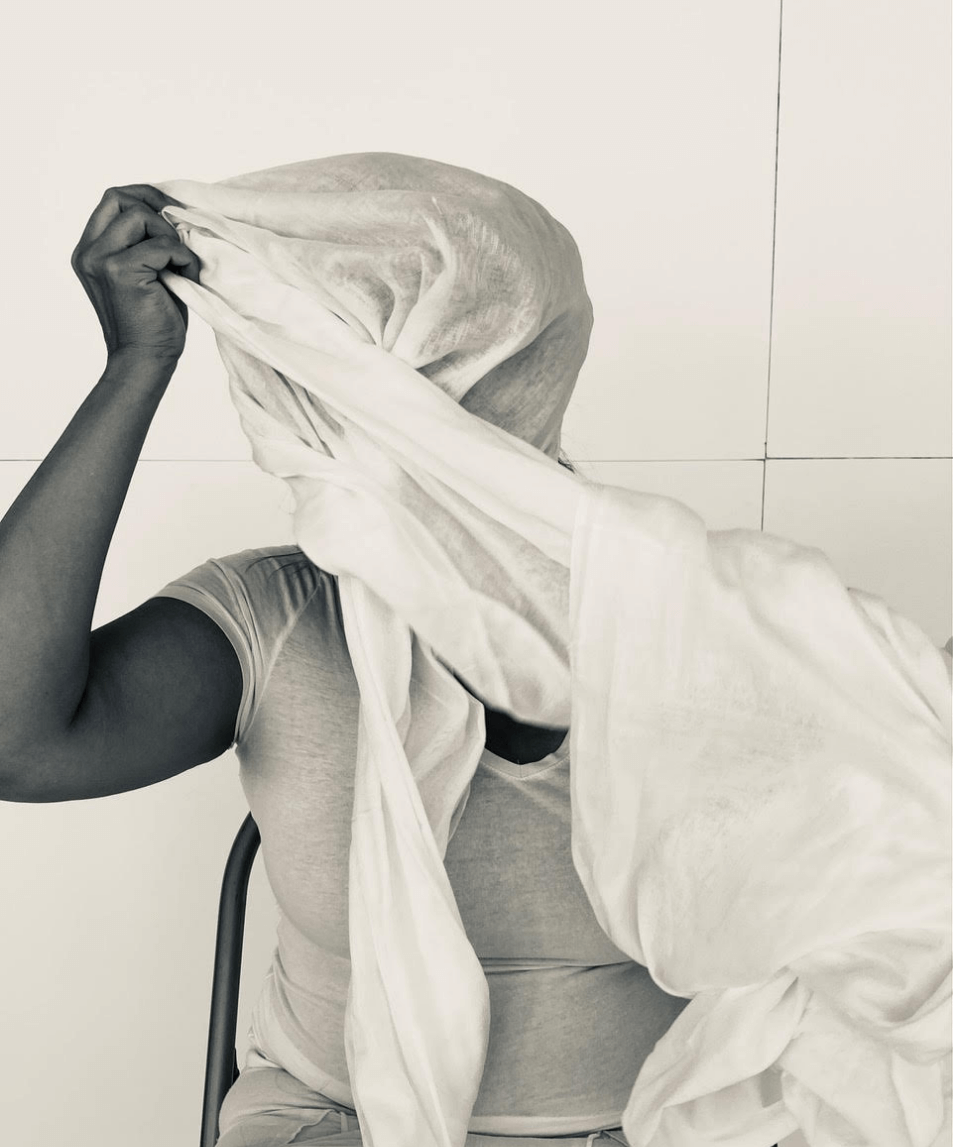 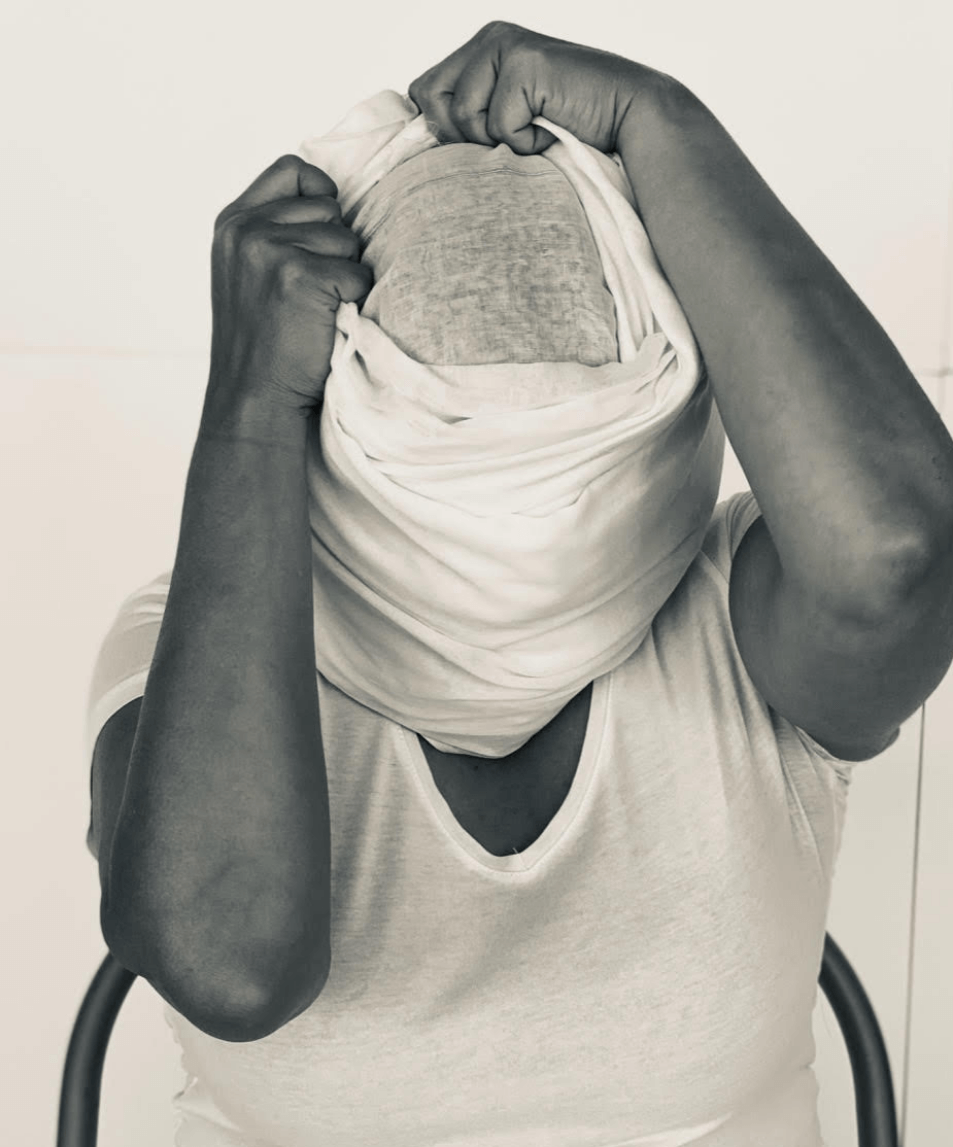 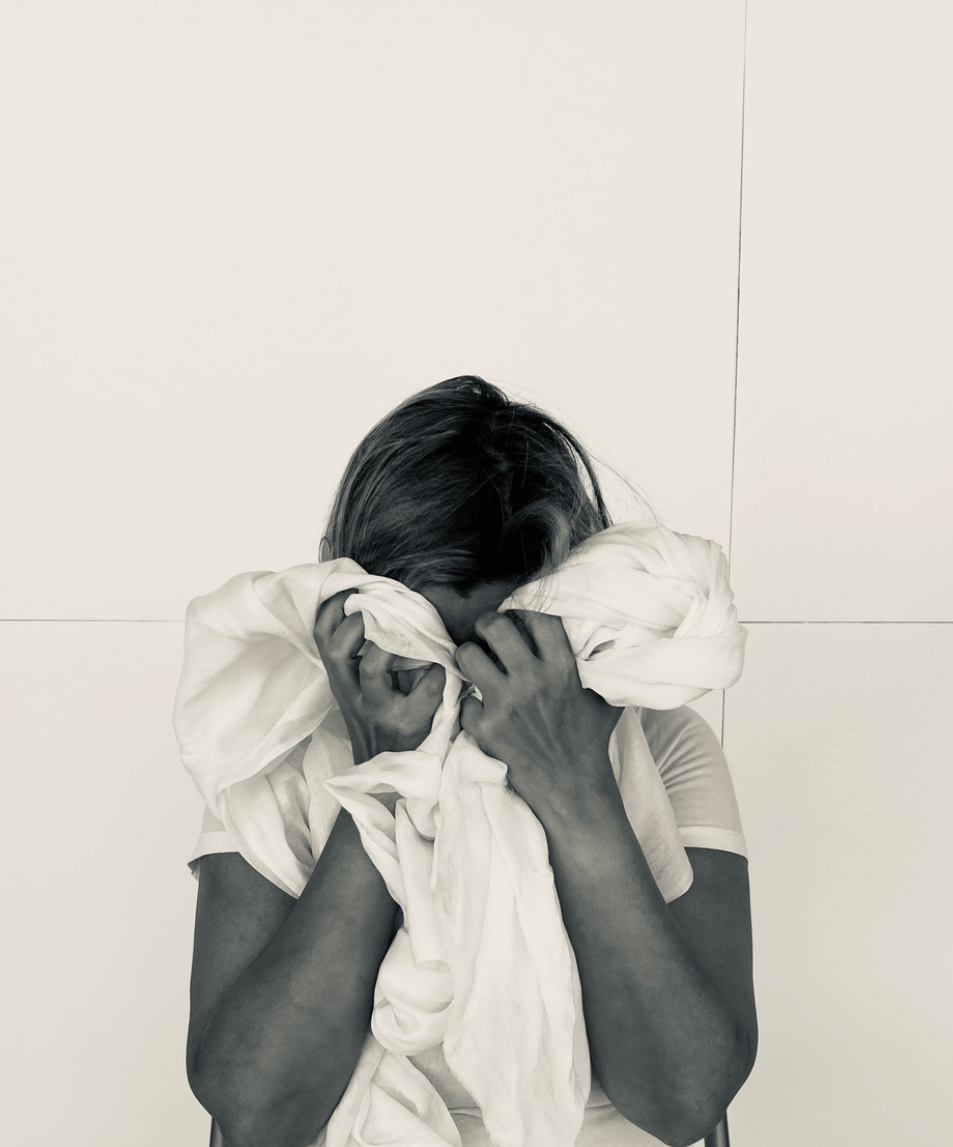 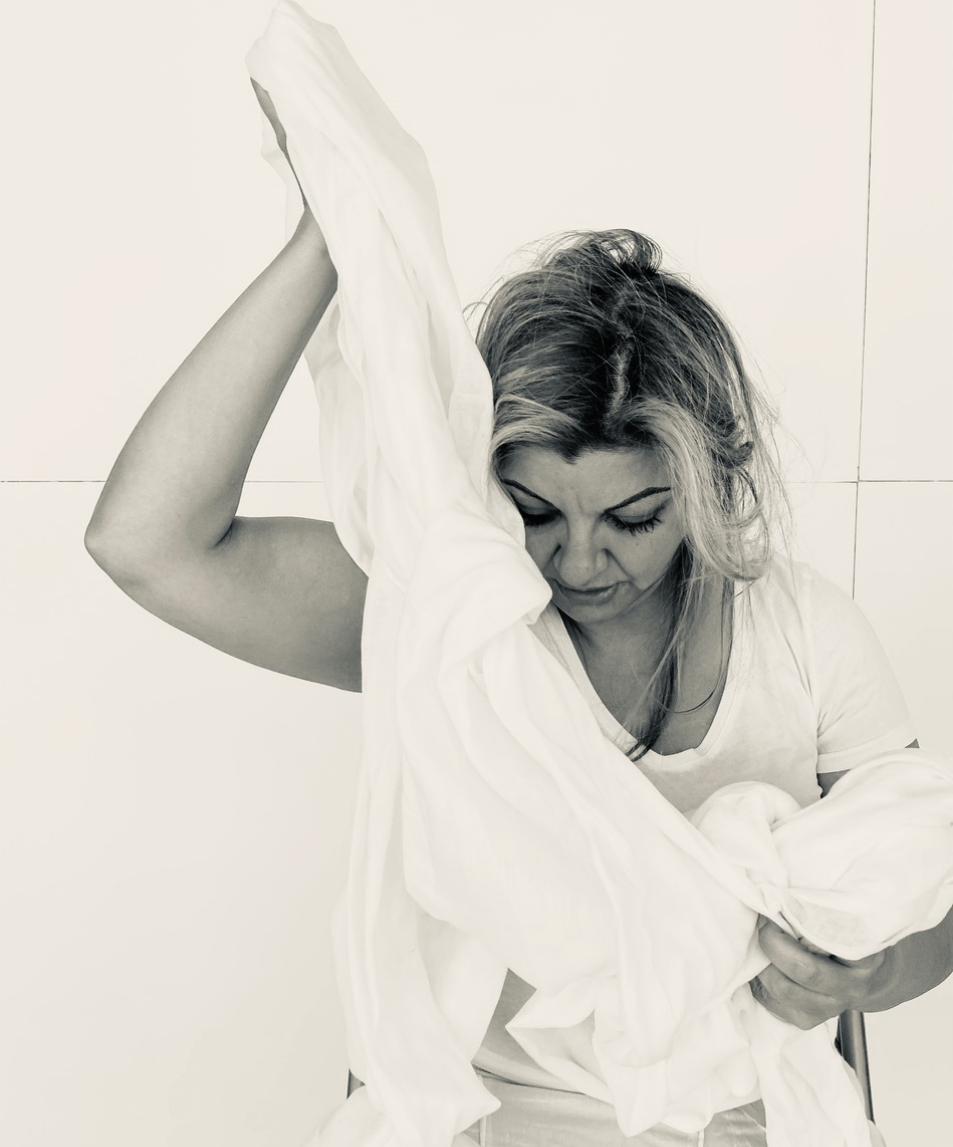 Suffocate | Photographs I to IV

As Saint Anselm of Canterbury (1033-1109) famously concluded – ‘credo ut intellegam’ – ‘I believe so that I may understand’. It is this deep meshing of belief and understanding which distinguishes Jaffer’s approach to life and art. Her practice, she notes, is inspired by a desire to ‘transcend religious mechanisms and encourage a conversation around spiritual pluralism and cultural diversity’. While her position differs from Anselm’s – Jaffer does not believe in an absolute, exclusive and exclusionary godhead – what she crucially inherits from Anselm’s dictum is the synergetic relationship between belief and understanding, faith and reason.

However, Jaffer’s vision, all importantly, is based on plurality and diversity, unsurprising given her hybrid and diasporic history. Her interest in Kufic texts and Arabic calligraphy, the belief in both an origin and a void, substance and the non-substantive, infinity and Kundalini, worlds boundless yet sensuous, intimate yet strangely other, tells us of a woman and artist who conceives of life as an explorative journey. Conceived in the abstract – despite the fact that symbols play a key role in the creation of a work – Jaffer’s work is both an intimation – an evocation – and a resistance – a refusal to explain itself. Her major work, ‘Eye of Creation’ – exhibited in a group show, ‘Does This Resonate With You’, at the Jaffer Gallery in June-July 2021 – is perhaps her most visceral expression of the dance of nothingness and matter, spirituality and its precarity. The ‘eye’ in the painting is both a portal and a void, all-seeing and blind, knowing yet mysterious. It is the ‘eye’ of God – some pluralistically conceived deity – but it is also the ‘I’ that is the artist – the one who created the work. Tonally moody and dark, offset with glittering reds and copper, the painting evokes a realm at once fathomless and iridescent.

It is this quivering shifting world which Jaffer conjures which is its greatest tell. Her pursuit of spirituality stems from the fallen world from which we are emerging – the world of doubt, irony, despair, of hate and confusion and lies – a world, ours, that is profoundly in crisis. By fusing ‘spiritual pluralism and cultural diversity’, Jaffer is seeking a way out of this failing vision. Like V.S. Naipaul, she well realises that the only way to do so is to ‘make ourselves according to the ideas we have of our possibilities’. 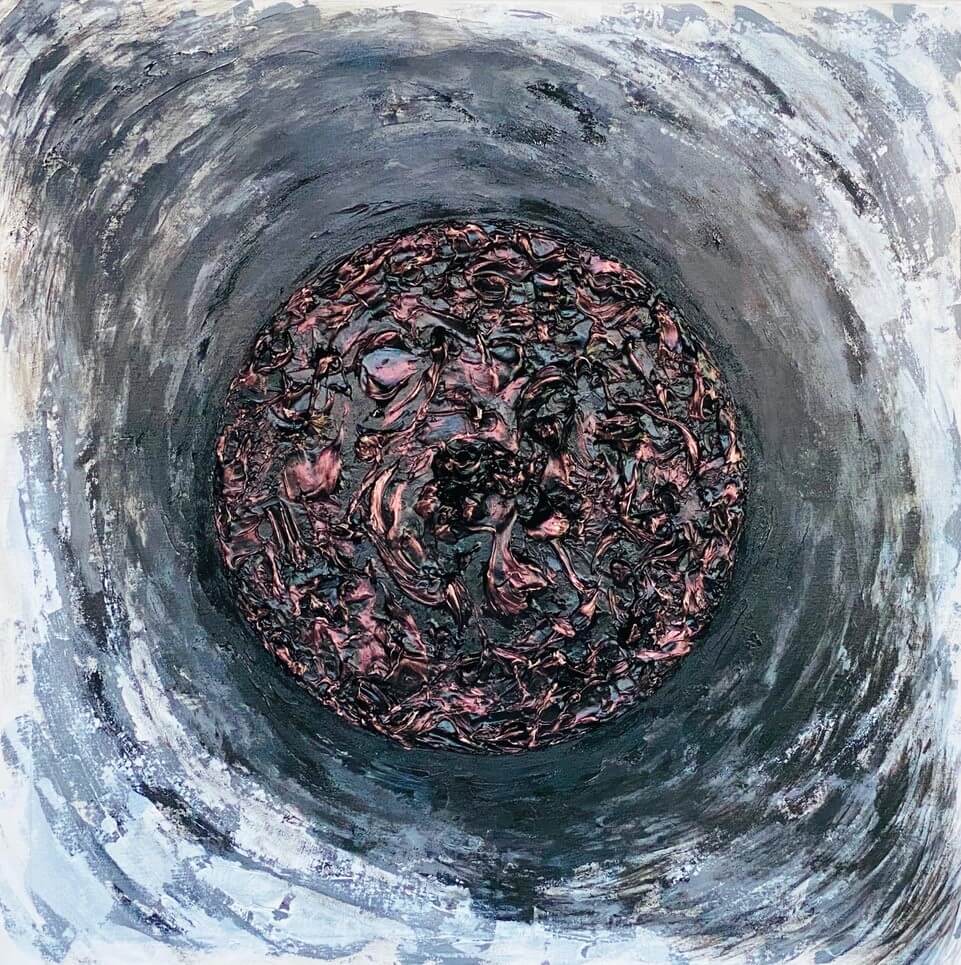 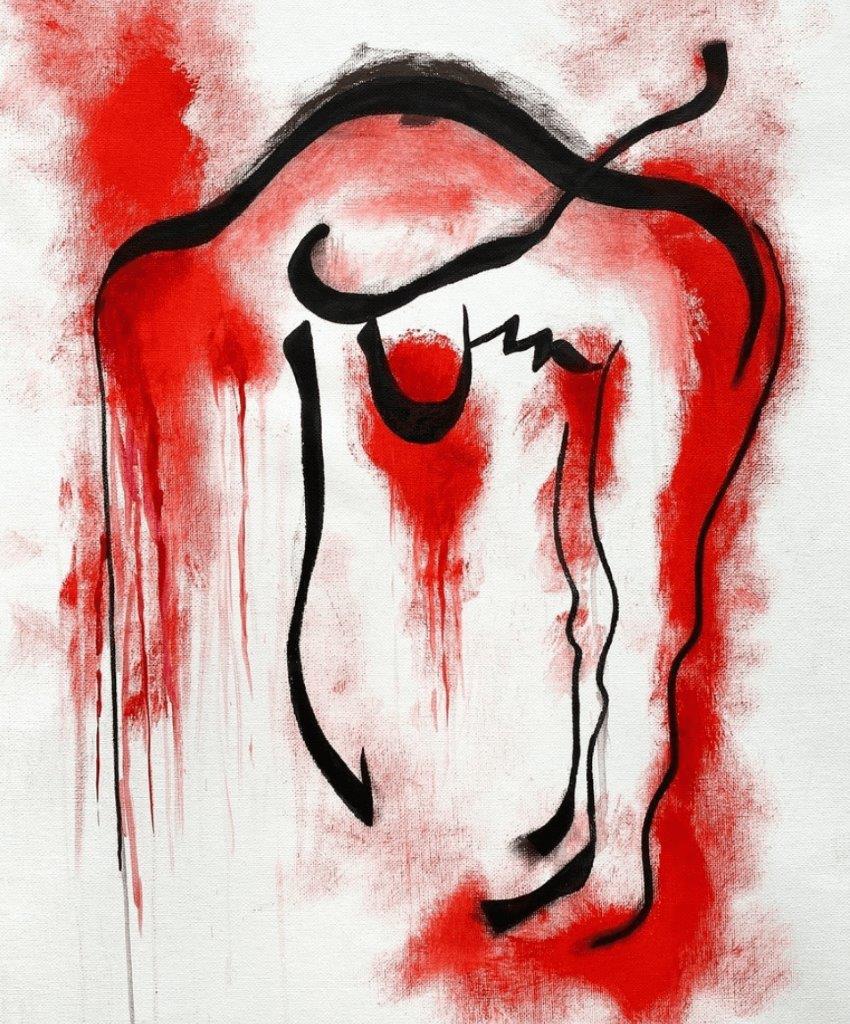 It was never enough, mixed media on canvas, 2021 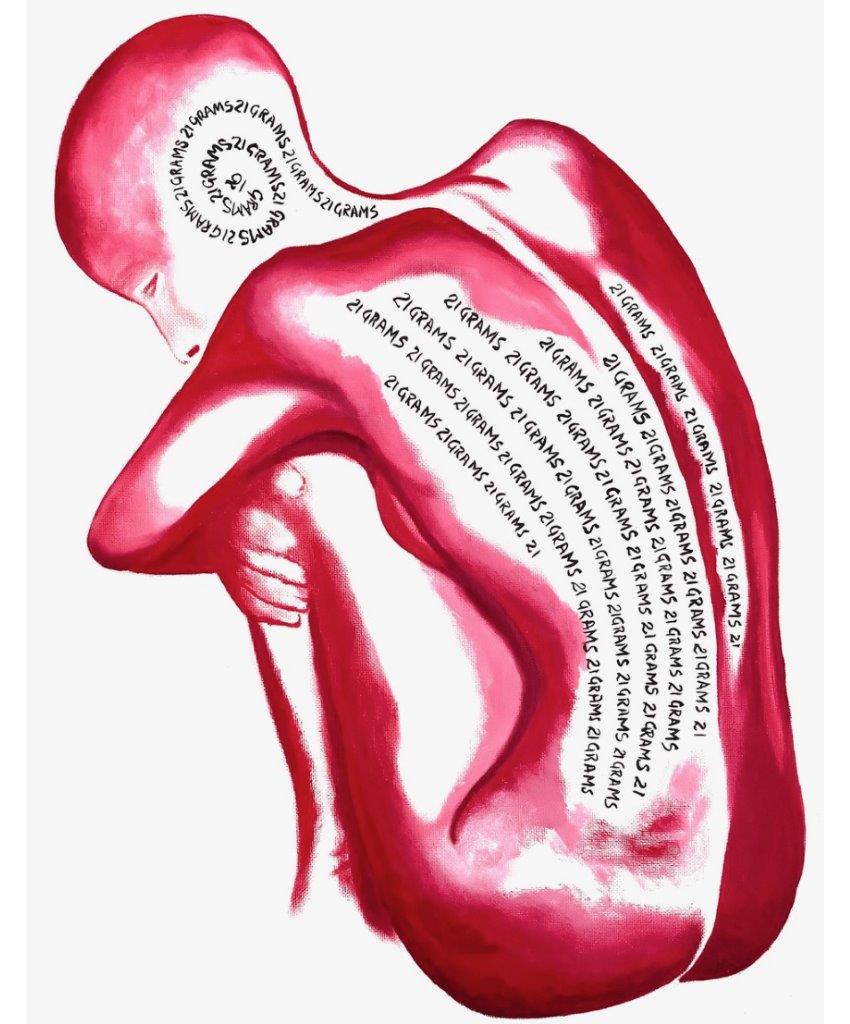