Strauss & Co is pleased to announce details of its forthcoming live sale of modern, post-war and contemporary art, decorative arts, jewellery and fine wine, due to be held over three days from 11 to 13 April. This sale, the company’s first marquee live event for 2021, includes an important historical collection of art assembled over half a century by the Cape Wine Growers Association (KWV), two important collections of Chinese porcelain and a producer-themed sale of wines from three legendary Cape estates. A transcendent JH Pierneef landscape dominated by baobab trees leads a top-quality selection by this master landscape painter. 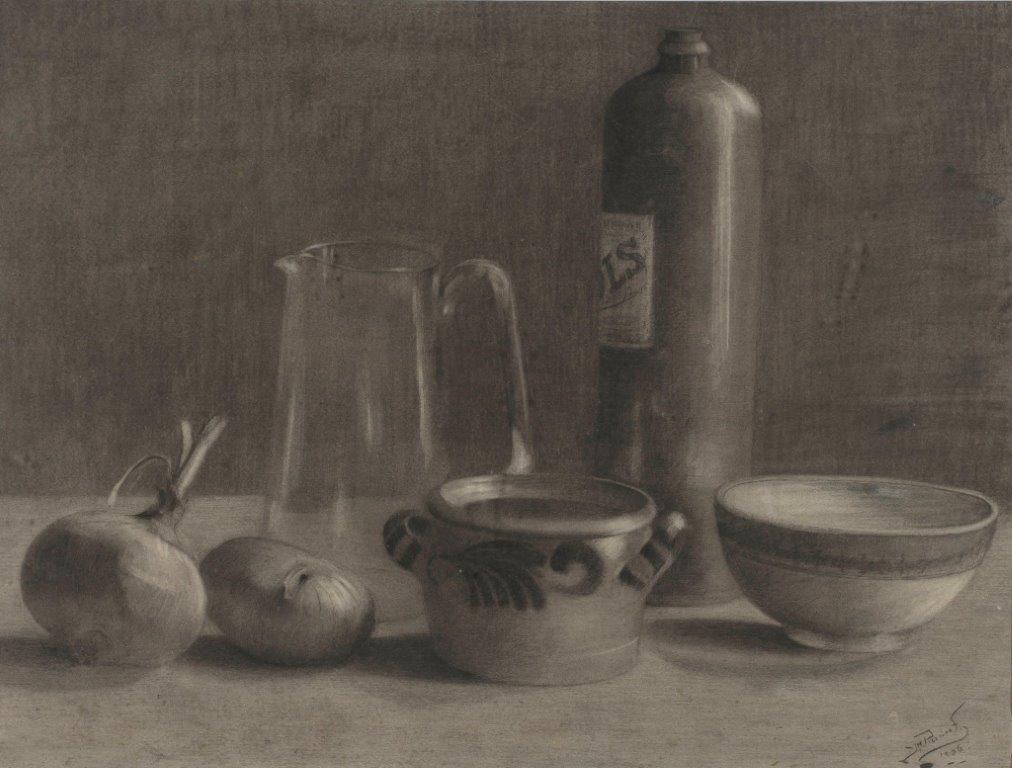 Our four marquee live sales are important calendar events for collectors, as this is when Strauss & Co reveals its premium offerings and presents its single-owner properties,” says Strauss & Co joint managing director Bina Genovese. “The catalogue for the April sale is no exception. The painting selection is bracketed by two important historical landscapes by Thomas Bowler and a selection of graphics by contemporary masters of the form, Mr Brainwash and Banksy. The live sale will integrate various bidding options, from commission to telephone, online and in-person bidding, to ensure effortless transacting and personal well-being.”

Started in 1958, the KWV Collection features post-war paintings rooted in the Cape region, its landscapes, people and industries. Formerly displayed at the Laborie Manor and KWV Sensorium in the La Concorde head office, both in Paarl, the consignment to Strauss & Co includes The Origin of Wine/The Epic of Gilgamesh (estimate R800 000 – 1.2 million), an elaborate panel piece commissioned by KWV from Cecil Skotnes. The work narrates the history of wine and its arrival in South Africa and marked a pivotal moment in the artist’s later career. The collection also includes two Skotnes table settings, notably Still life with Bottles (estimate R400 000 – 600 000) and Wyn wat die Meuse-hart Verheug (estimate R60 000 – 80 000) 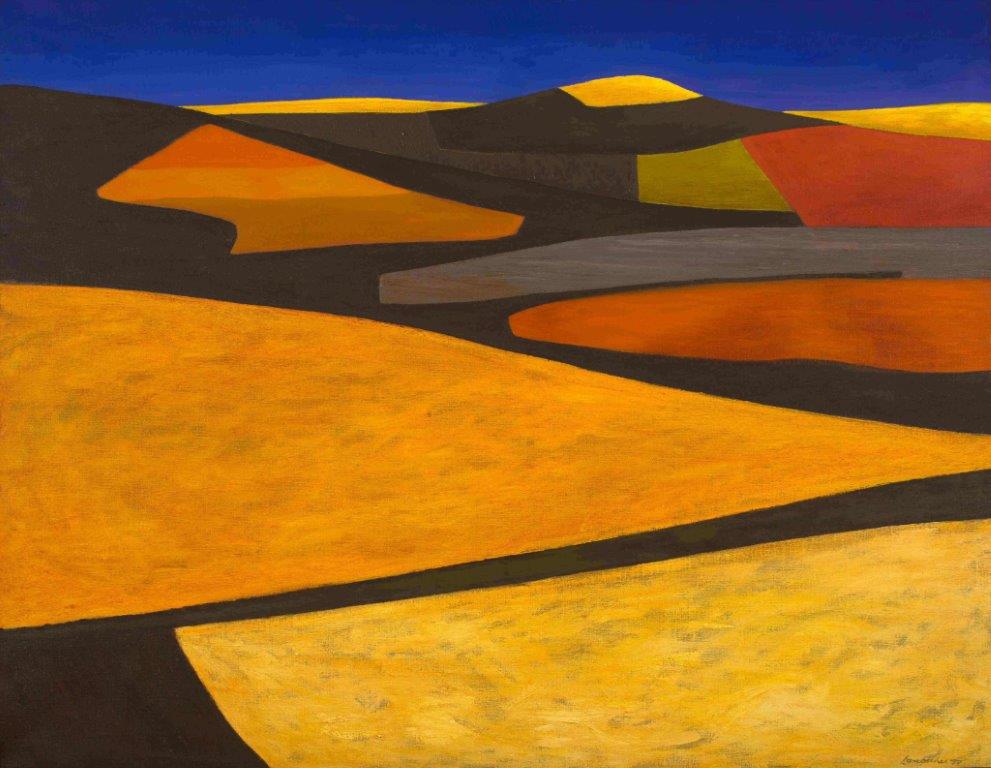 Oil paintings by Thomas Bowler are exceedingly rare with only twelve examples known to be in existence. Strauss & Co is delighted to offer two Bowler oils consigned by Metropolitan Life: the undated maritime scene Arrival of the East Indiaman, St. Lawrence in Table Bay, Cape of Good Hope (estimate R100 000 – 150 000) and a bay scene of Port Elizabeth made circa 1861 (estimate R150 000 – 200 000). Both works have excellent provenance and exhibition histories. 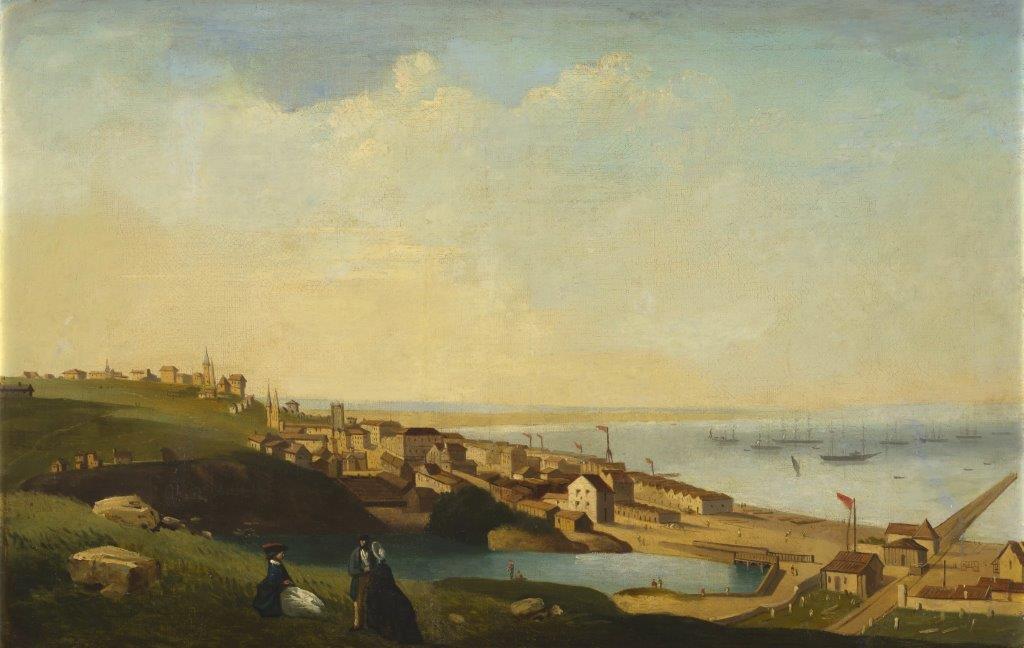 Two works by JH Pierneef from the property of a gentleman lead an impressive selection of works by this auction bellwether in the April sale. Painted in 1952 and measuring 44,5 by 59cm, Baobabs (estimate R2.5 – 3 million) is a fine example of Pierneef’s ornamental late style of depicting the northern landscapes of South Africa. Consigned by the same seller, a 1906 still life executed in charcoal and pencil (estimate R250 000 – 350 000) reveals Pierneef’s solid grounding in the academic tradition.

Other notable Pierneef lots in the April catalogue include his epic of tone and mood, Sunlit Mountains, Clarens (estimate R1.5 – 2 million), and Elephant Castle, Selati Rivier, Phalaborwa (estimate R1.8 – 2.4 million), an assured work from 1945 depicting the confluence of the Selati and Olifants rivers outside Phalaborwa. Findlay Farm, Magaliesberg (estimate R1.2 – 1.6 million) portrays the region surrounding Hartbeesport Dam and was made shortly after Pierneef’s divorce from his first wife, Agatha, in 1924. A tireless traveller of his homeland, Fishing Boats, Hout Bay (estimate R2 – 3 million) dates from 1942 and depicts a pair of sculptural fishing boats backed by a row of coastal houses and mountains.

A notable highlight of the sale is Maggie Laubser’s Shepherd and Sheep (estimate 1 200 000 – 1 500 000). Executed in 1924 when Laubser returned from Europe to her family farm, it represents one of numerous paintings of Ou Booi, the bushman who was the shepherd on the farm sporting his trademark outfit.

The middle of the twentieth century was a time of change and innovation for South African painting. Three painters stand out. Alexis Preller’s Constellation from 1966 (estimate R650 000 – 850 000) is a low relief made of gesso, oil and gold leaf on wood and features abundant galactic allusions. Christo Coetzee’s After Japan (estimate R250 000 – 350 000) recalls his important work visit to Japan in 1959-60, and was first exhibited at Galerie Stadler, Paris, in 1961. Erik Laubscher’s vividly coloured trio of acrylics – Eggs and Gasket, Still Life: Homage to Marsden Hartley, recto; Buildings, verso, and Abstract Still Life (estimate R250 000 – 350 000 each) –derive from his confident middle period in the 1970s. 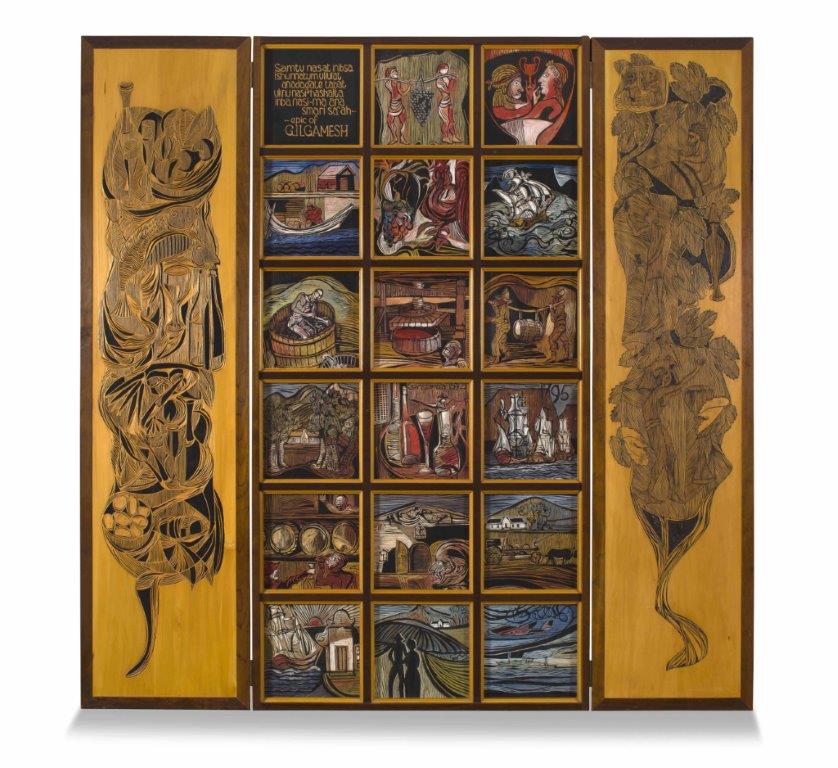 The vibrant Laubschers are the property of a private collector. Another notable lot from this collection is American painter Larry Rivers’s notational portrait of his lover titled Head of Molly (estimate R200 000 – 300 000). The work was acquired from dealer Joe Wolpe and has been authenticated by the Estate of Larry Rivers. The story of painting is one of many possibilities Adriaan Boshoff’s impressionist studies of farm life and youth have been a staple of private collections since the 1970s and over the past two decades he has commanded solid prices at auction. Boshoff’s Cattle Branding (estimate R900 000 – R1.2 million) leads a selection of four works by this self-taught painter. 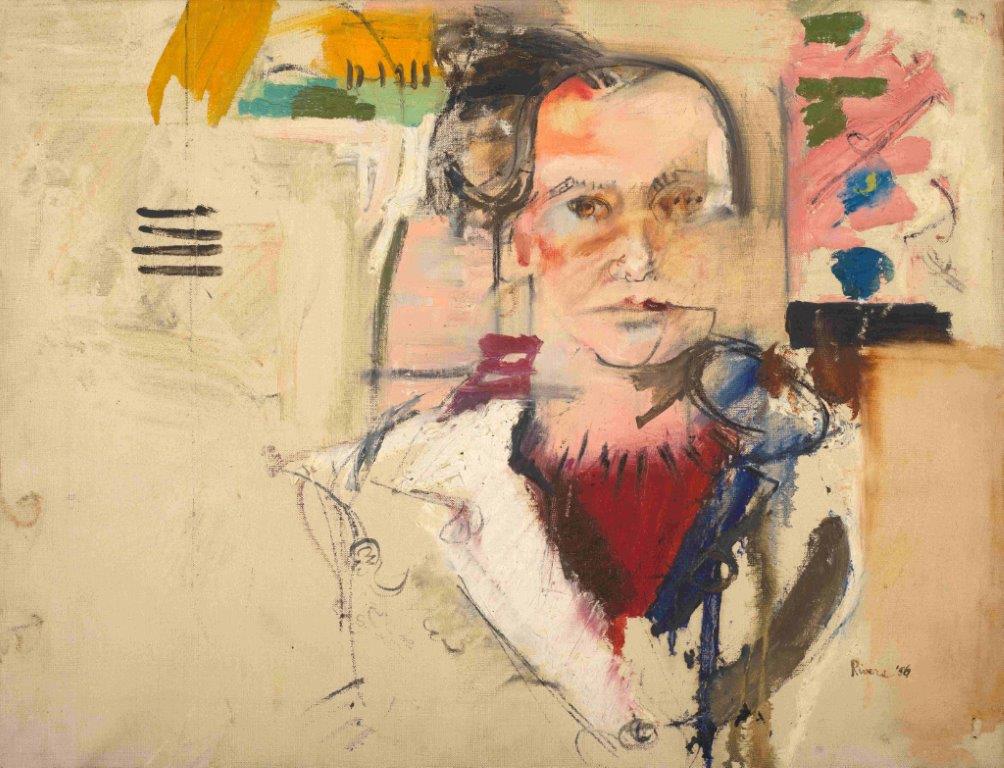 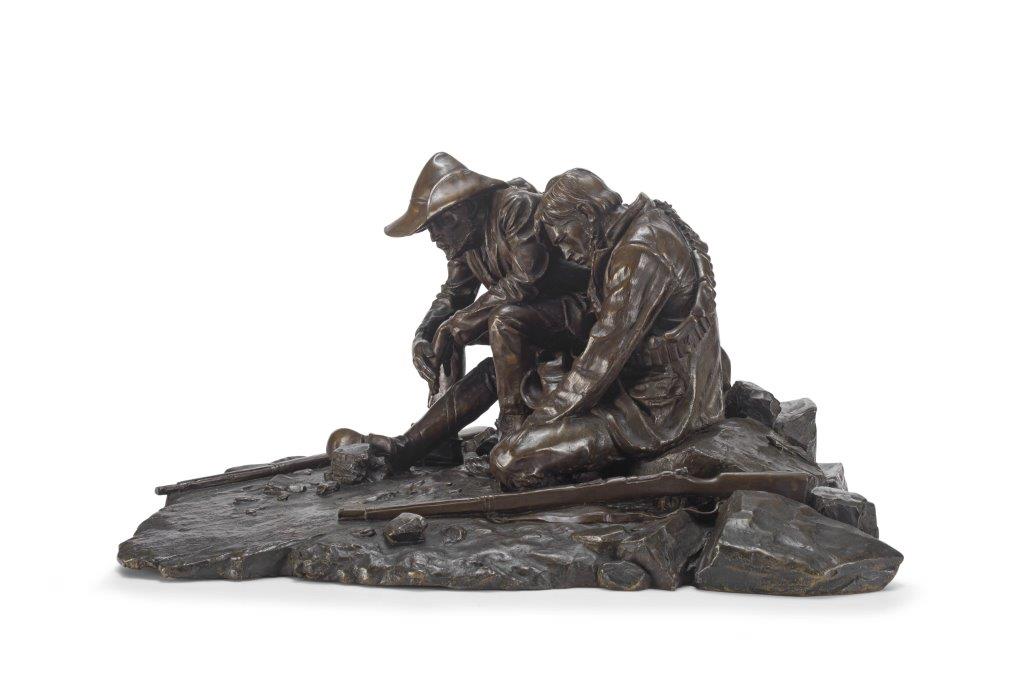 Strauss & Co’s marquee live sale will commence on Sunday, 11 April with a session devoted to the three Cape wine producers and it will conclude on Tuesday, 13 April. The sale will be live-streamed to bidders from two sales venues in Cape Town and Johannesburg. There is an option of in-person bidding at both venues. Covid-19 safety protocols apply throughout. 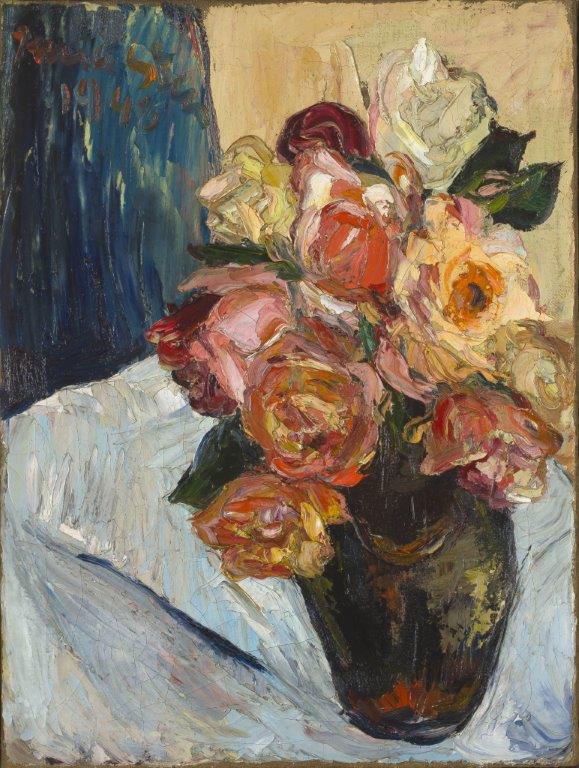 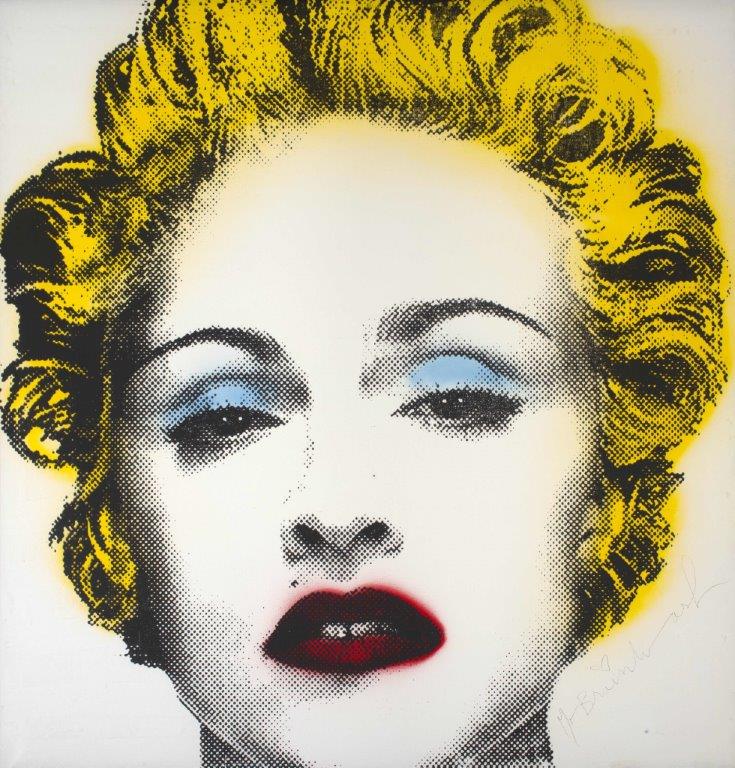 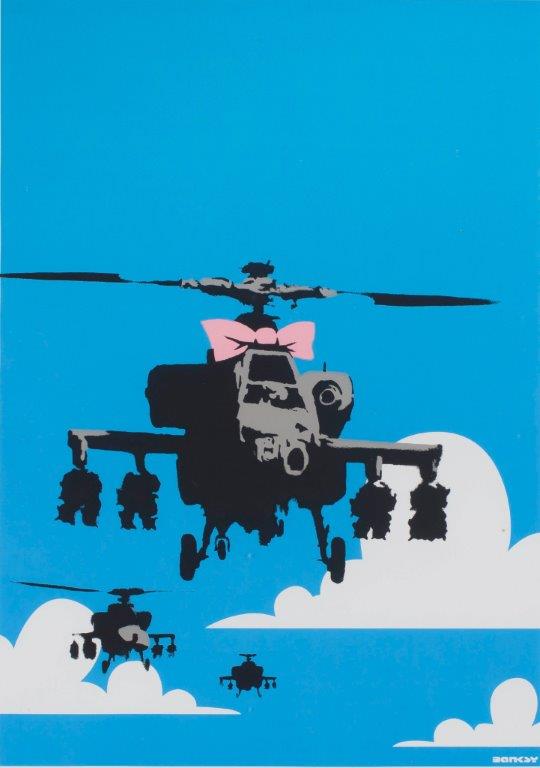 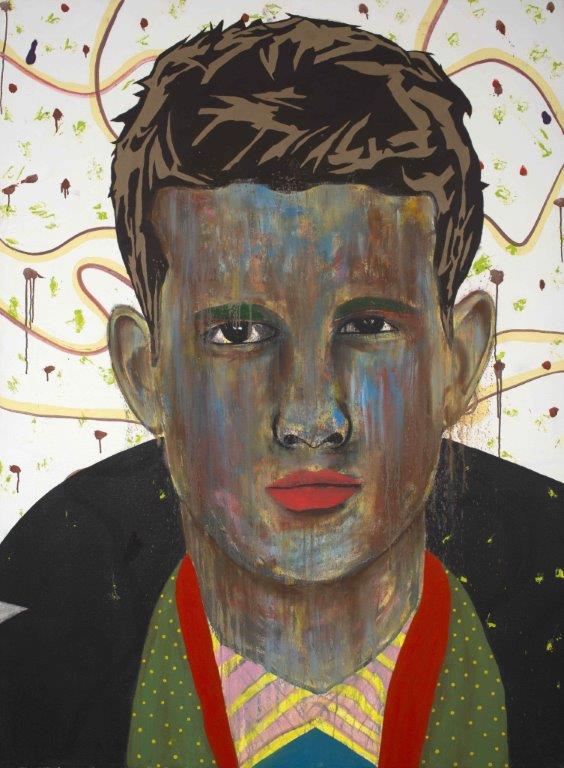