AT FEATURE: Life is a stage, and we are all merely players | Marié Stander Solo Exhibition

AT FEATURE: Life is a stage, and we are all merely players | Marié Stander Solo Exhibition

‘Life is a stage, and we are all merely players’
Marié Stander Solo Exhibition
ManZArt Franschhoek
www.manzart.com 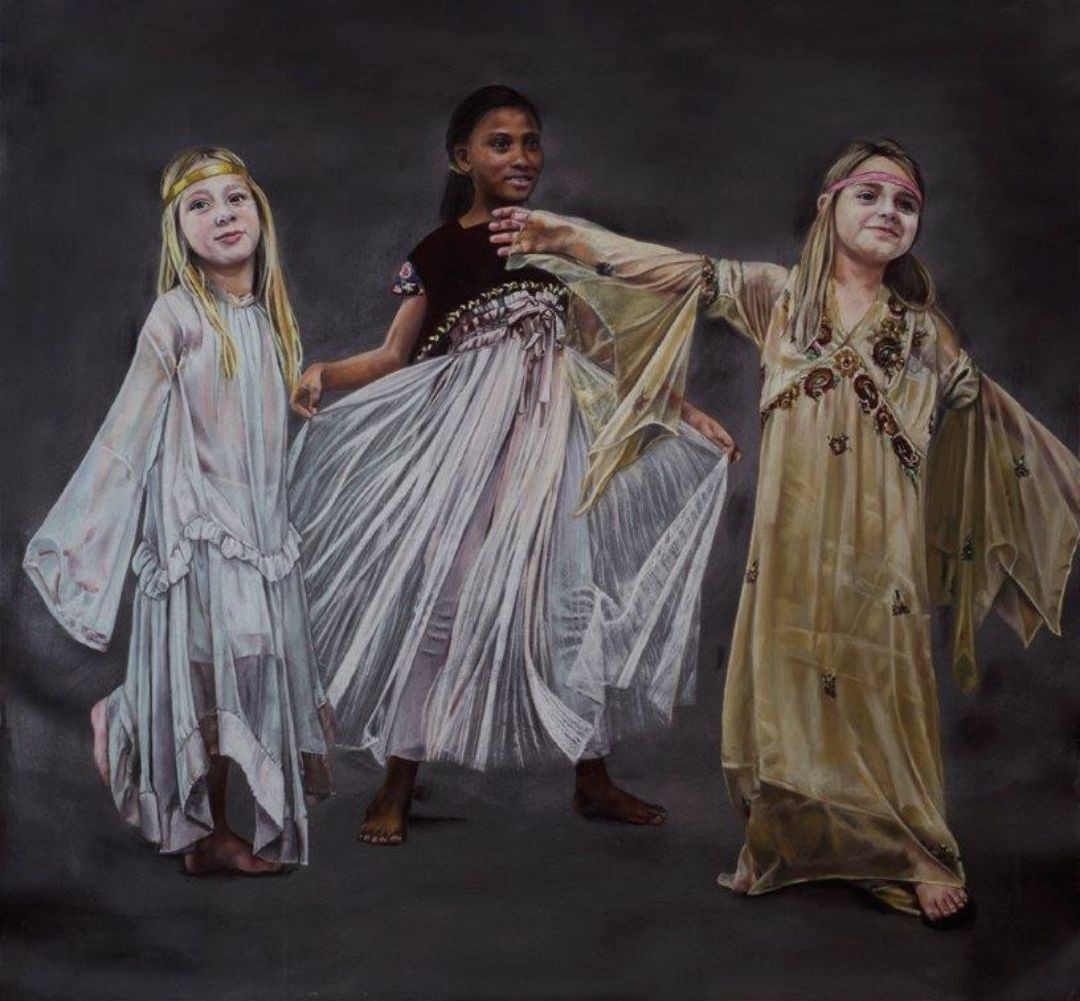 The ManZArt Gallery presents Marié Stander’s seventh solo show, opening the 18h of April 2021 – a celebration of pure African artistic talent in the heart of Franschhoek.

Marié joined the ManZArt stable of artists with her first solo show well over a decade ago and has been an important part of the life and success of the gallery – her works finding homes in many prestigious collections around the country and abroad.

Best known for her figurative charcoal drawings, Marié’s new show will take over the main exhibition space in the gallery on the main street in Franschhoek with an impressive nine large scale near life-size drawings of her new body of work entitled, ‘life is a stage, and we are all merely players’ – most in pastel, some in charcoal.
Unsurprisingly, Marié Stander has a large and ever-growing following throughout South Africa’s collector community and throughout the world. Her works can be found in most of the main African corporate and private collections and many international contemporary art collections. The prestigious Sanlam private collection acquired several of her works. Marié’s work was previously submitted for the UK National Portrait Award.

Marie opened the Aardklop National Arts Festival in Potchefstroom as one of the four festival artists as well as being selected as one of the festival artists for the Oudshoorn KKNK and the Stellenbosch Wordfees in recent years. She was invited to exhibit at the Stellenbosch Wordfees for several years running, showcasing a large selection of her work. 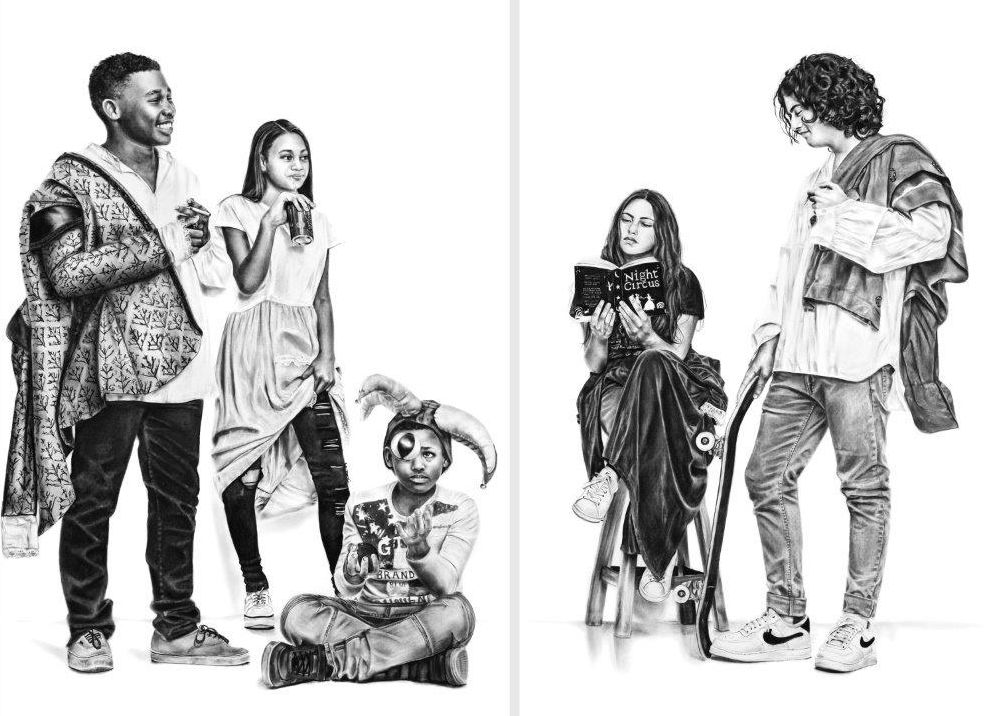 Marié Stander has been a three-time finalist in the top 40 of the National Sanlam Portrait SPI competition and has had the great opportunity to produce a portrait commission for Archbishop Emeritus, Desmond Tutu.

Artist statement
All the world is a stage and all the men and women merely players. They have entrances and exits. We all have many stages and parts to play… it is said, our acts being seven stages through life. Starting from birth, through adulthood, and into old age, where we return to being dependent as at birth. Every stage having its own challenges and characteristics.

My solo is inspired by the beautiful theatrical plays written by Shakespeare. I use modern-day actors to portray Shakespearean characters like hamlet, Ophelia, lady Macbeth, Romeo and Juliet, the harlequin, Feste, and the fairies from A Midsummers Night’s Dream.

All these characters appropriately portraying typical characteristics and issues that we still experience in current times… so portraying the dualism not only between the past and the present but also between reality and play. Juxtaposing the typical Shakespearean characters in a contemporary African context.

In a certain sense, it is also an existential portrayal of individual people who are free and responsible beings, determining their own development through “acts” of will. To heighten the drama of theatre, I portrayed the Shakespearean characters in dramatic fashion in full colour and dark background. Using soft pastel as a drawing medium while backstage, the actors show their true identity as they are portrayed in black and white with charcoal as a medium. 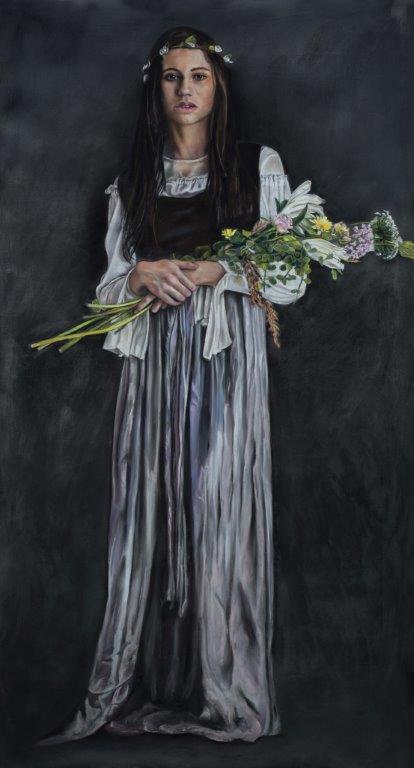 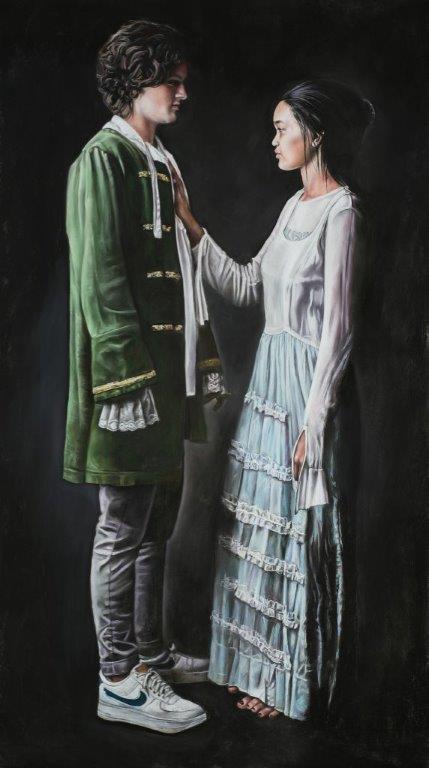