The Melrose Gallery presents a new edition of limited edition prints of LIVESTOCK, a collaboration between painter Arlene Amaler-Raviv and photographer Dale Yudelman. 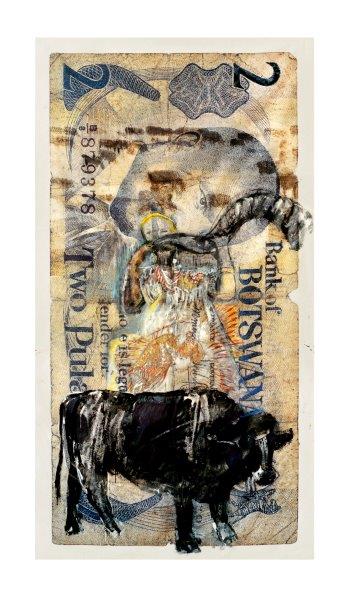 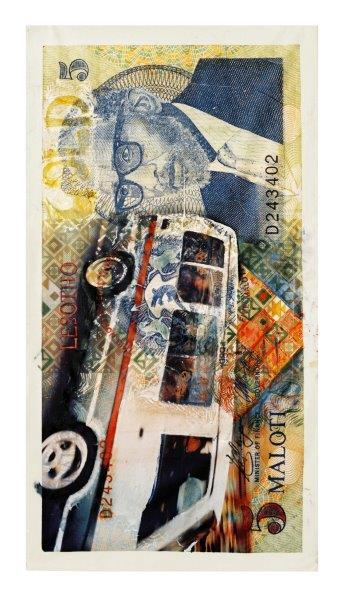 This body of works was originally released to wide acclaim at the Eighth Havana Biennial in Cuba in 2003. The original installation of fourteen panels on cloth, each measuring 2x1m, were suspended from an intricate aluminium wire system. The series of works recollects the image of a row of flags outside an international symposium venue. In this case, it is the New York Stock Exchange.

Each Southern African currency’s intricate design and patterning serves as a background for the painted mark. The original notes, worn and torn, have passed through many hands, giving feedback of the history, memories and human lives. Although the works combine banknotes with painted and printed images that relate to each specific country they also, illustrate on a broader level that cattle were central to traditional Africa – from ceremonies to a measure of wealth and status.

Through this installation of suspended images, a walkway is created for people to interact with and touch the notes that sway gently on their own axis. The fragility and weightlessness of these notes are contrasted – and paradoxically linked – with the massive electronic wiring system of the New York Stock Exchange. The aerial view of this marketplace with its live wires is connected to the bloodline of livestock in the African homeland. 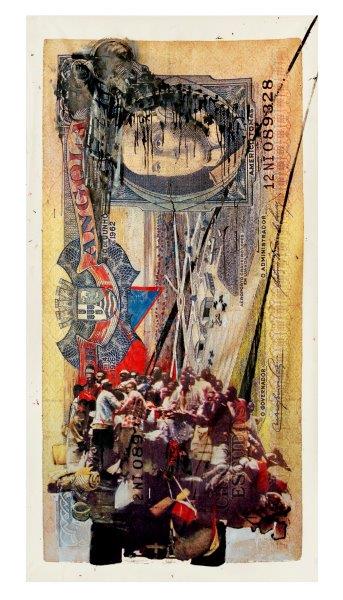 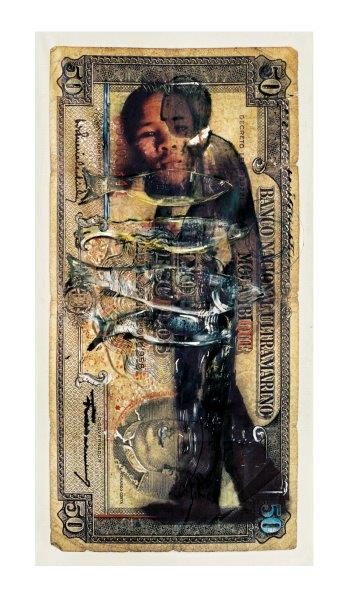 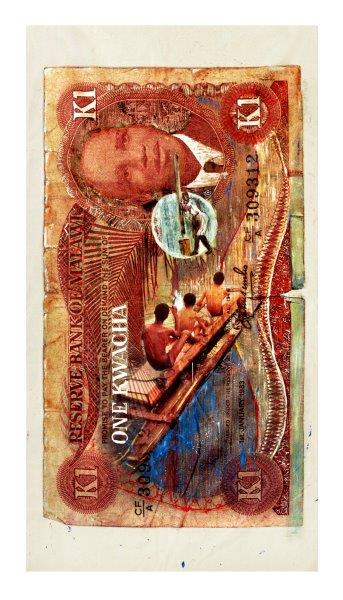 Arlene Amaler-Raviv:
Born in Johannesburg, South Africa, Arlene Amaler-Raviv received a BA Fine Art Degree from the University of the Witwatersrand where she studied under Robert Hodgins. In the 70’s she was involved in art education, workshops, teaching, and teacher training programmes.

From 1979 she has held many solo exhibitions at Everard Read Gallery, Market Theatre Gallery and group shows both in South Africa and abroad. During the 1990’s she lectured at the University of Pretoria, FUBA and at the Katlehong Art Center (BACA).In 1996 she lived in the Netherlands where she assisted in the curatorship of the exhibition of ‘Africa meets Africa’ at the Museum of Ethnology, Rotterdam.

1997 Amaler-Raviv moved to Cape Town where numerous projects developed. A twenty-meter sight-specific installation for the District Six Sculpture Project ‘Dislocation Relocation’; large oil paintings on glass ‘Departure’ at Mark Coetzee Fine Art and two collaborative exhibitions with photographer Dale Yudelman – ‘One’ at the Association for Visual Arts and ‘Where the Mountain meets the City’ at 232 Long Street.

In 2000 Vodacom commissioned Amaler-Raviv to create an installation of seventeen oil paintings on aluminium. Spier acquired a 2m x 2m portrait of Mandela for their collection in 2002. Many of her paintings and works hang in private collections around the world and publicly in major art collections in South Africa. 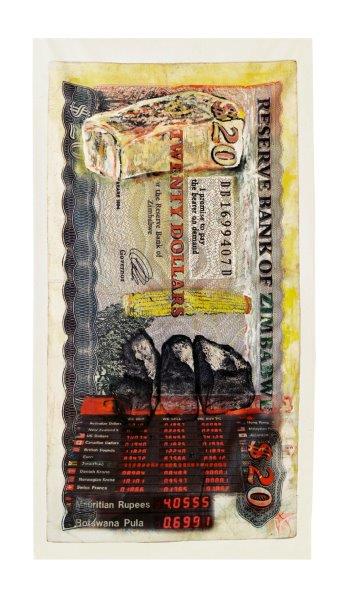 Dale Yudelman:
Dale Yudelman’s career in photography has led him through two eras of South African history as well as across several continents. Born in Johannesburg, and inspired by creative parents, he began photographing at a young age under the tutelage of his father.

He was barely out of his teens in 1979 when he started working as a staff photographer for The Star Newspaper. In 1986 he moved to London and then Los Angeles, working freelance for various newspapers and magazines. Returning to a newly democratic South Africa in 1996, he began collaborating with artist Arlene Amaler-Raviv. Together they produced three major exhibitions and a number of commissions – their final show, ‘Livestock’ was exhibited at the 8th Havana Biennale in Cuba.

Yudelman then ventured into uncharted territory drawing on his photojournalism background and a growing interest in digital technology. The resulting series ‘Reality Bytes’ are works that reclaim and freeze the emotional content of daily experience rather than merely regurgitating actual events. A number of projects followed – including ‘ I am…’, a portrayal of the ongoing plight of refugees in South Africa. For his series ‘Life under Democracy,’ he won the inaugural Ernest Cole Award in 2012 – the country’s most prestigious prize for social documentary photography.

Yudelman’s work is a consequence of a studied eye, brokered over forty years of incessant image-making. Enthralled with the many aspects, nuances and dimensions of reality – his images are a manifestation of how modern photography is able to escape the bounds of the ‘record’ – creating an authentic and evocative account of recent times 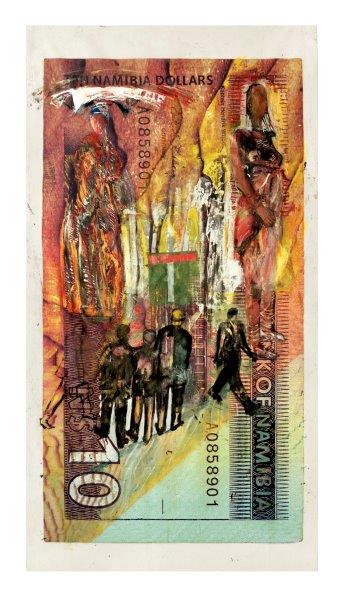 This edition of 11 images will be presented at The Melrose Gallery (Johannesburg) and on a viewing room on www.themelrosegallery.com from 25th February to 28th March 2021.
The prints are 128x77cm in size and this is a limited edition of 40. 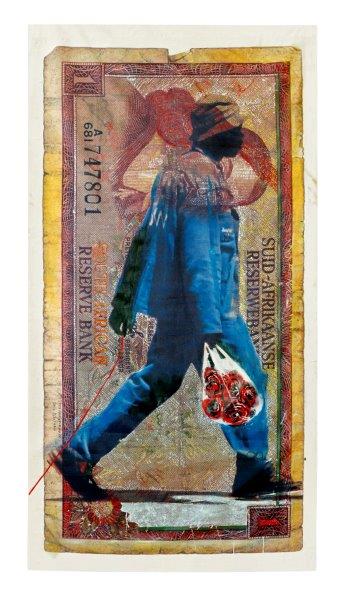 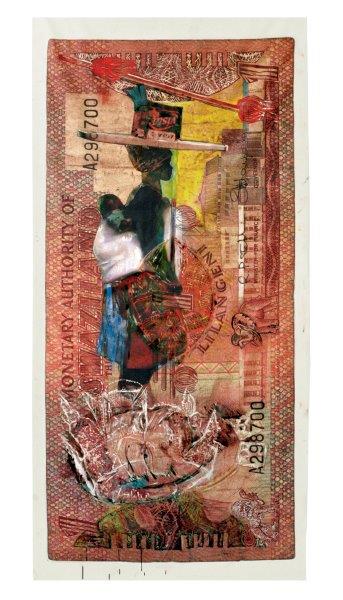 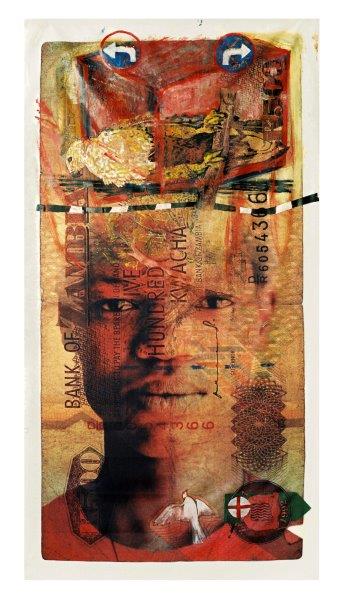