Lien Botha: The eye of the knife ̶ a contemplation on the recent work of Brahm van Zyl
www.princealbertgallery.co.za

Brahm van Zyl knows how to sharpen a knife. He loves cooking, and when he starts to chop, the Jean Dubost blade must sever with precision. It is with similar rigour that he approaches one of his artistic mediums – painting. Respected for his dexterity as set builder in the film industry, he transfers his skills as a sculptor to realise the impossible dreams of many directors. 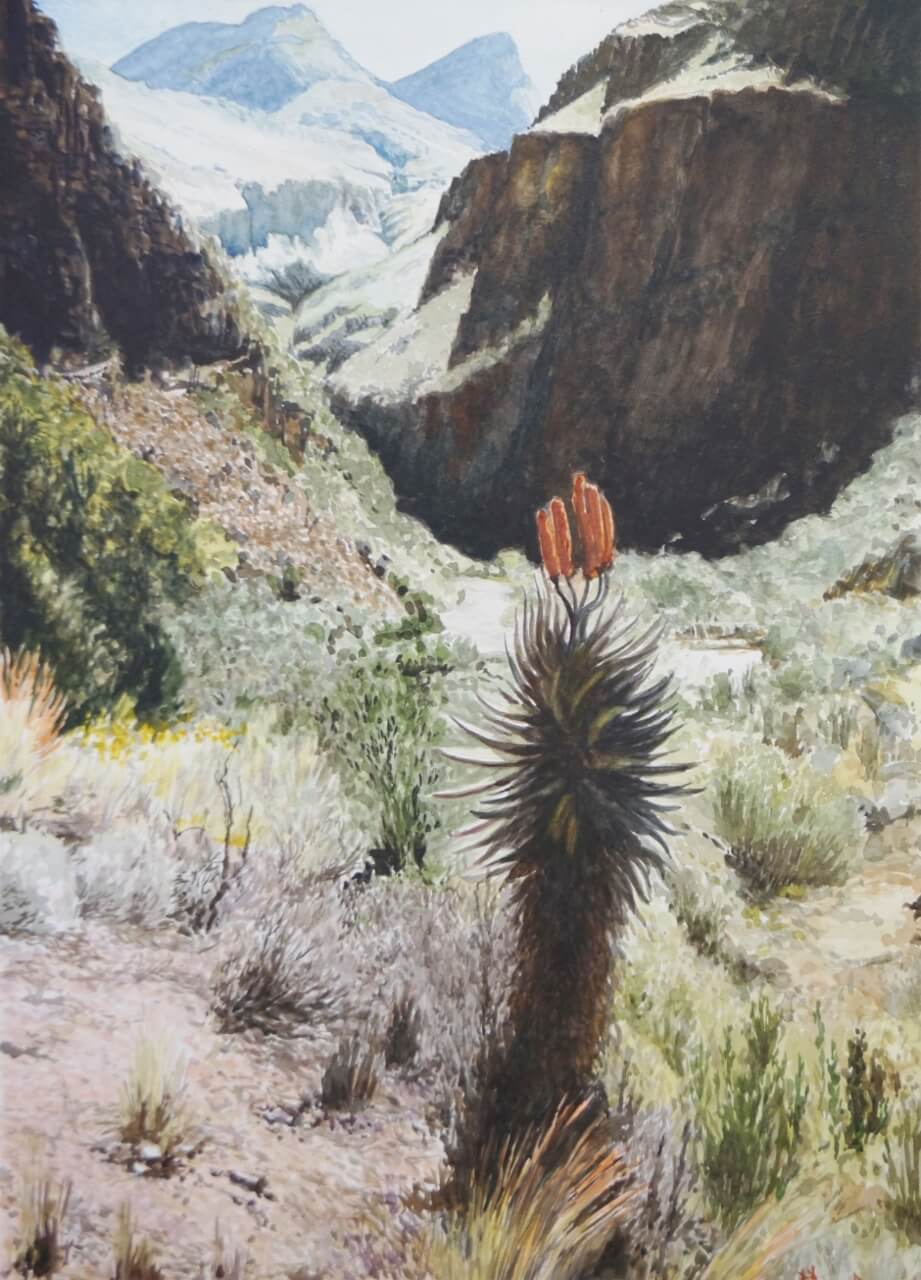 Yet, painting lines his heart and he is seasoned in the medium of oil, having mastered the technique over three decades. Then, along came lockdown and somewhere in its tumult he discovered the liberation of watercolour; a medium he briefly explored in his student days. Initially, he was inspired by the style of Adolph Jentsch and thought he would work in a similar manner, but he soon realised that he would make his own way through its pointillism and blooming.

Moving from oil to water sparked a whole new exploration as he looked at the work of artists such as Kazuo Kasai, Amit Kapoor and Joe Dowden; sharing in its delight, scale and possibilities. “The way I approach the medium is not the typical way in which artists use it, for instance, I use little blooming and my method is more controlled and focused.”

At the end of 2020 he and Juria le Roux, his wife and fellow artist, visited Joshua and Angela Miles in Prince Albert for a printmaking workshop. Driving through Meiringspoort on the homeward journey, he remembered how this dramatic landscape fascinated him as a child. “Meiringspoort has always intrigued me; we often drove through it during school holidays on our way to the coast. I would get very excited when we entered the pass, it felt as if we were driving into this tunnel. . . and it was majestic and even made me experience a sense of imminent danger. Through the imagination of a child, the rock formations conjured up the kind of pictures you sometimes see in the clouds. I found the aloes particularly beguiling and told my mom if war had to break out, I would come and hide there because if I stood still I would look like an aloe and no one would see me.” 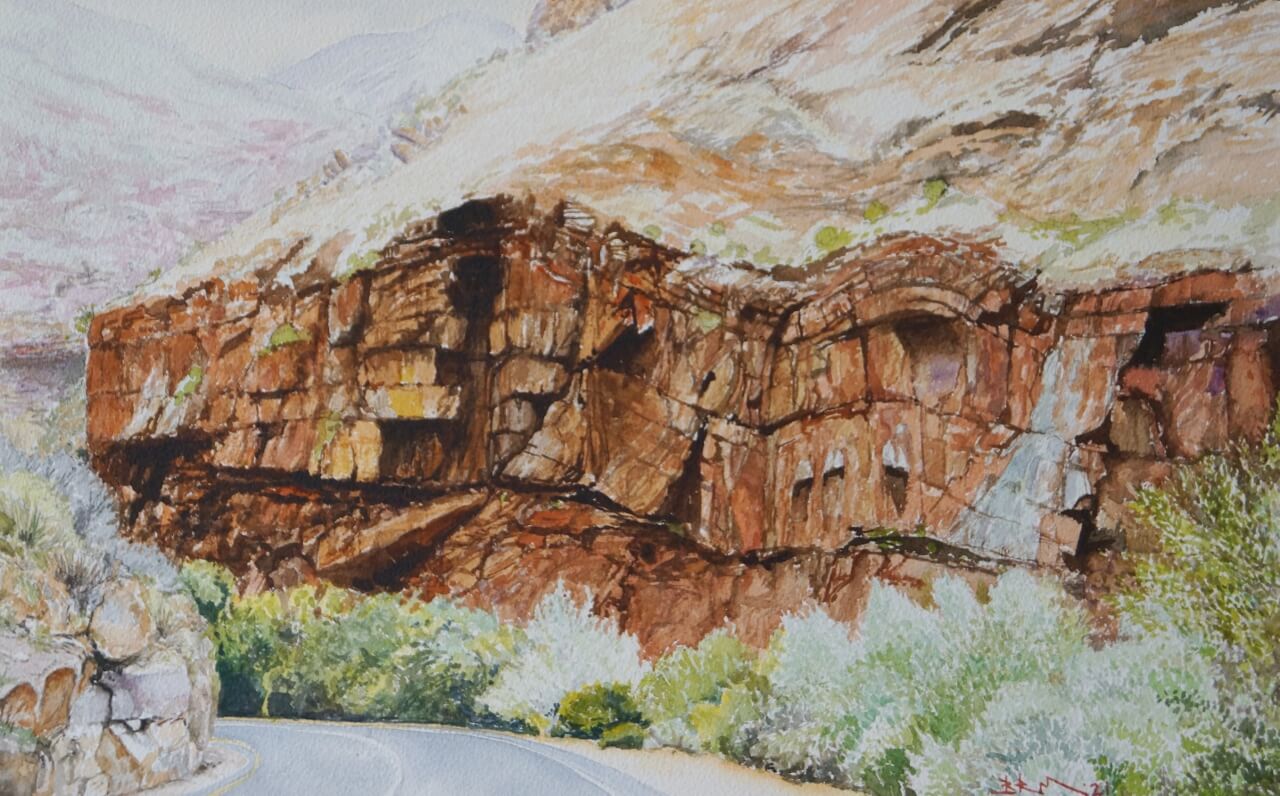 Taking a cue from masters such as J. H. Pierneef and Thinus de Jongh, he enthuses that an artist could spend a lifetime painting scenes along the extraordinary road ‘that crosses the same ravine in twenty five places.’

And so, these drifts became the focus of his latest body of work and forthcoming exhibition.
In February 2021 he re-visited Meiringspoort; walking and recording the sixteen kilometres of its folklore and awe ̶ surrendering his craft to nature’s theatre at Dyke Drift, Bushmans Drift and Hiddenravine Drift.

This is the stuff of Langenhoven’s imaginative elephant Herrie; a place where the fine sable of brushes dare dream under the gaze of the artist’s salty skies; executed by the quills of his treasured Casaneo brushes.

On the easel in his studio is Peach Tree Drift; a palette of rock strata and echoing crags ̶ riggered in raw sienna and Vandyke brown. A lone lorry halts the journey. Subtle greens evoke the shades of sagewood. “The colour of plants need to be desaturated, I temper it significantly with a touch of ivory black applied very discreetly.”
He gently taps the surface of the stretched Canson Montval, eliciting the sound of a soft drum. “The midtones are vital; for this I apply greys and dioxidene purple and violet which I sometimes mix into the sky to give it a tinge of depth and realism.” Traversing the artist’s translucent pools, you cross Ghost Drift ̶ ever aware of the cadence of old time folding back and forth through his meticulous tincture.

When you reach Waterfall Drift, observe the aloe of Brahm van Zyl’s youth ̶ still as a man carved in stone. 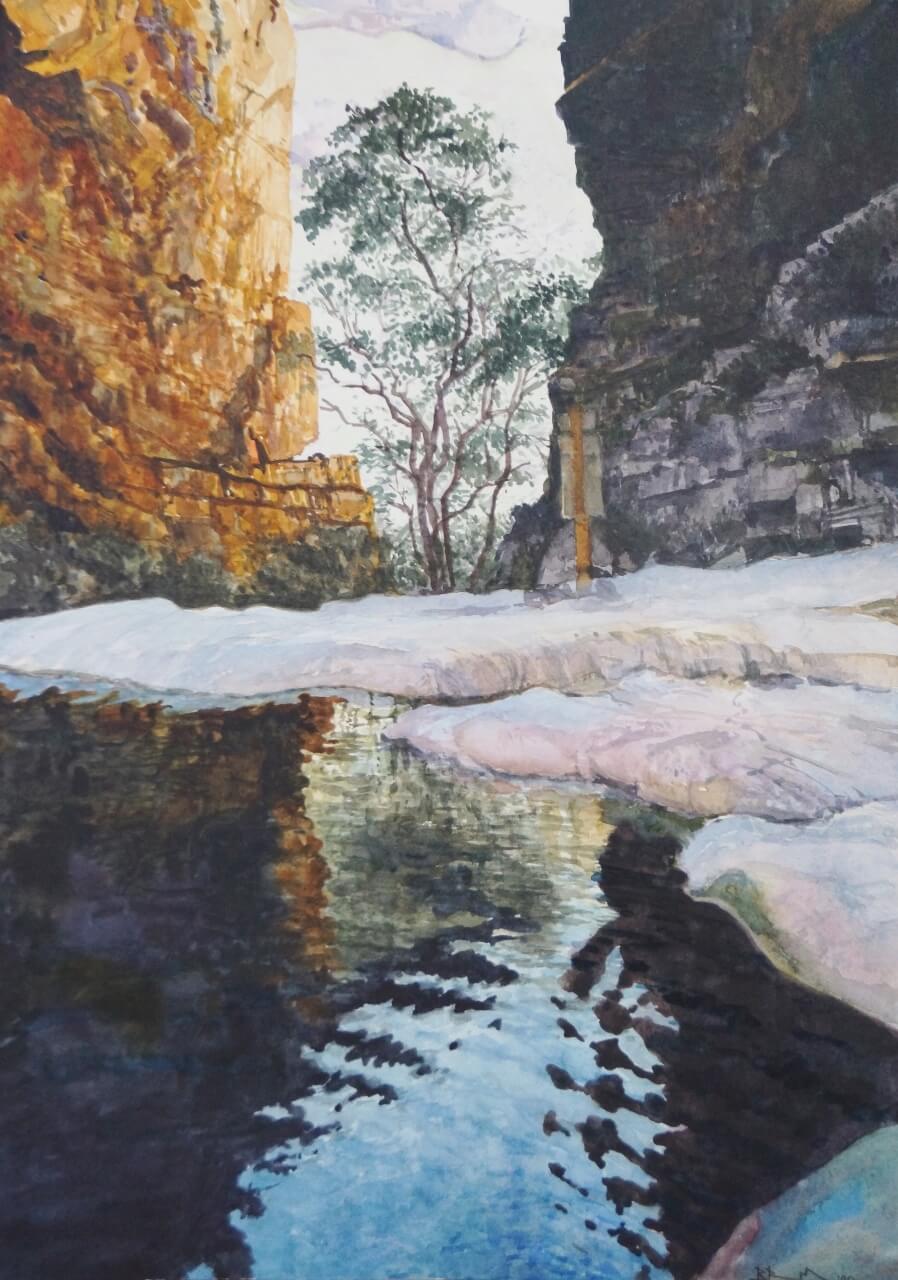 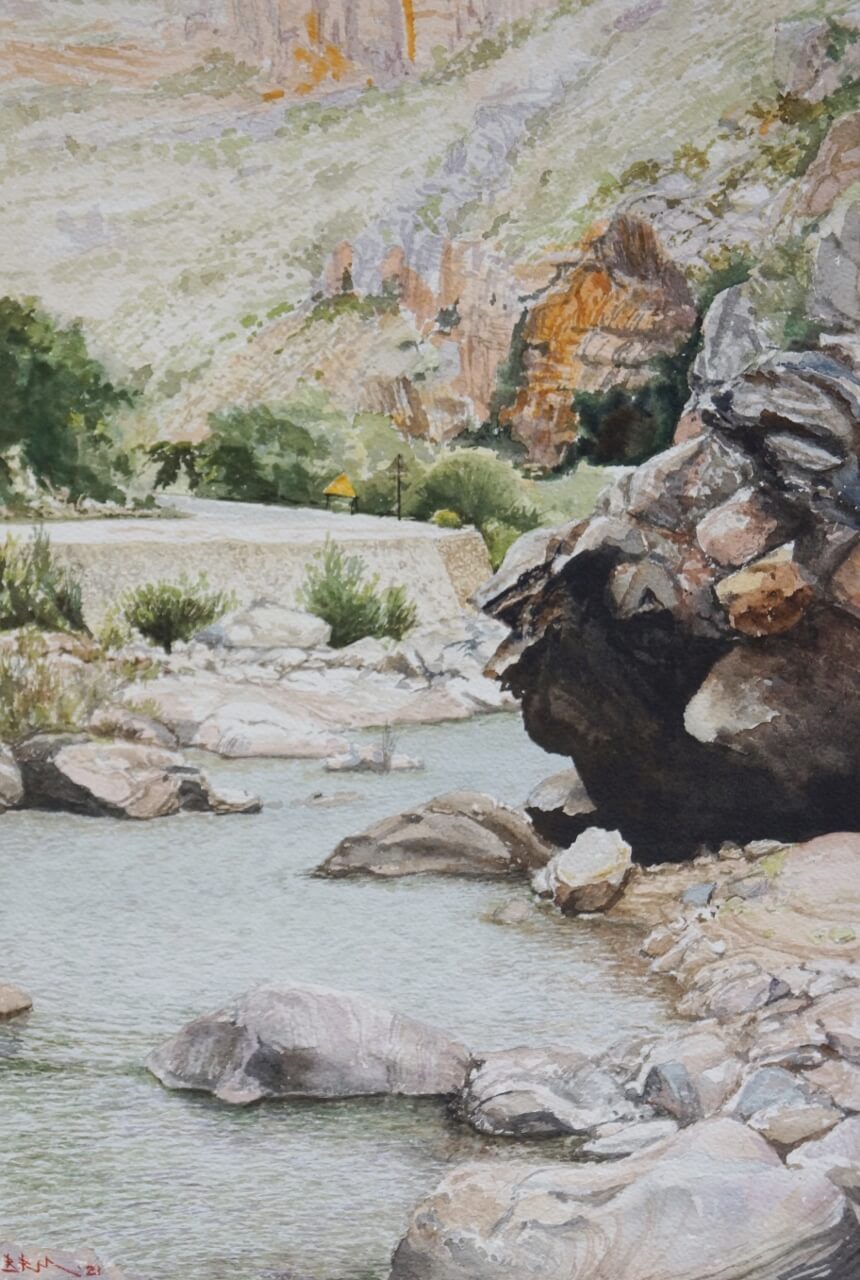 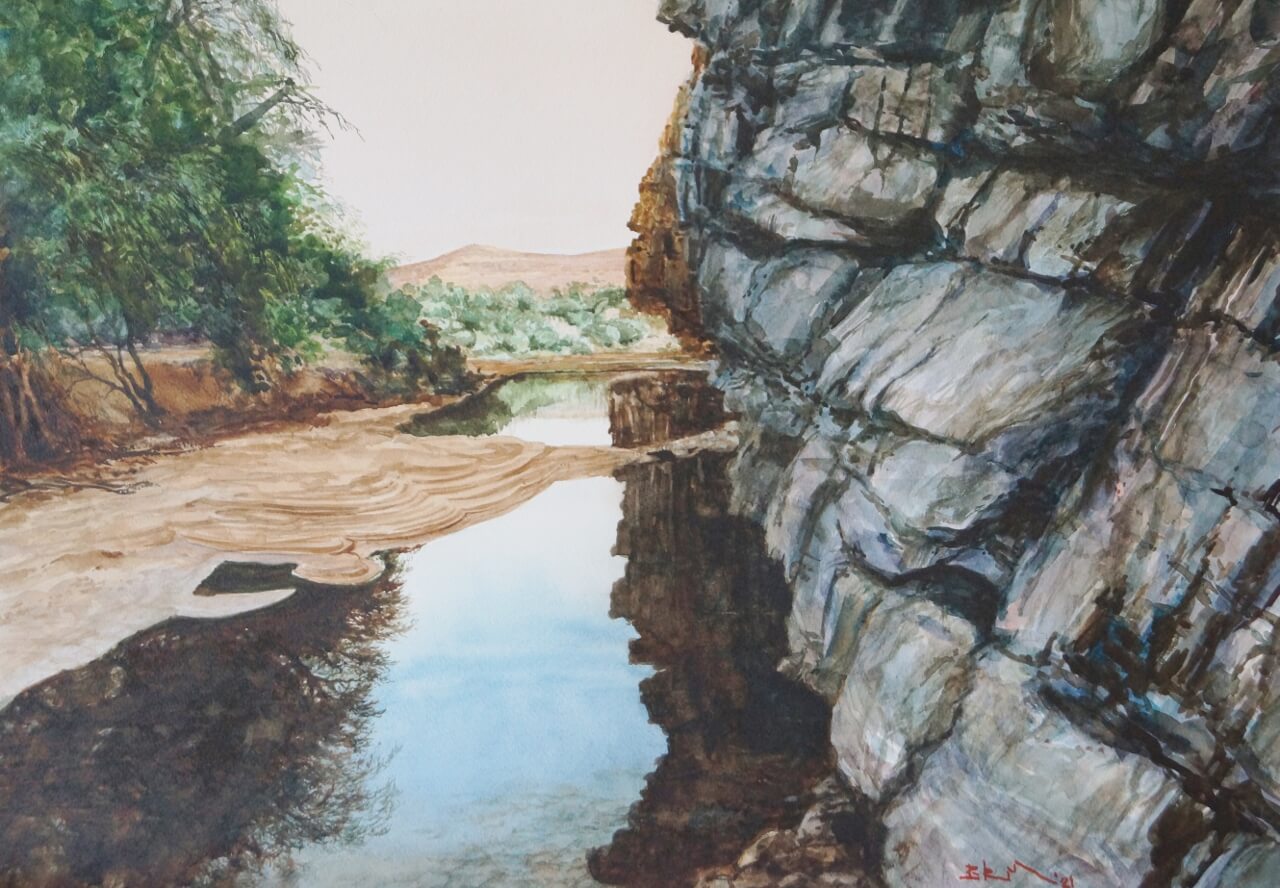 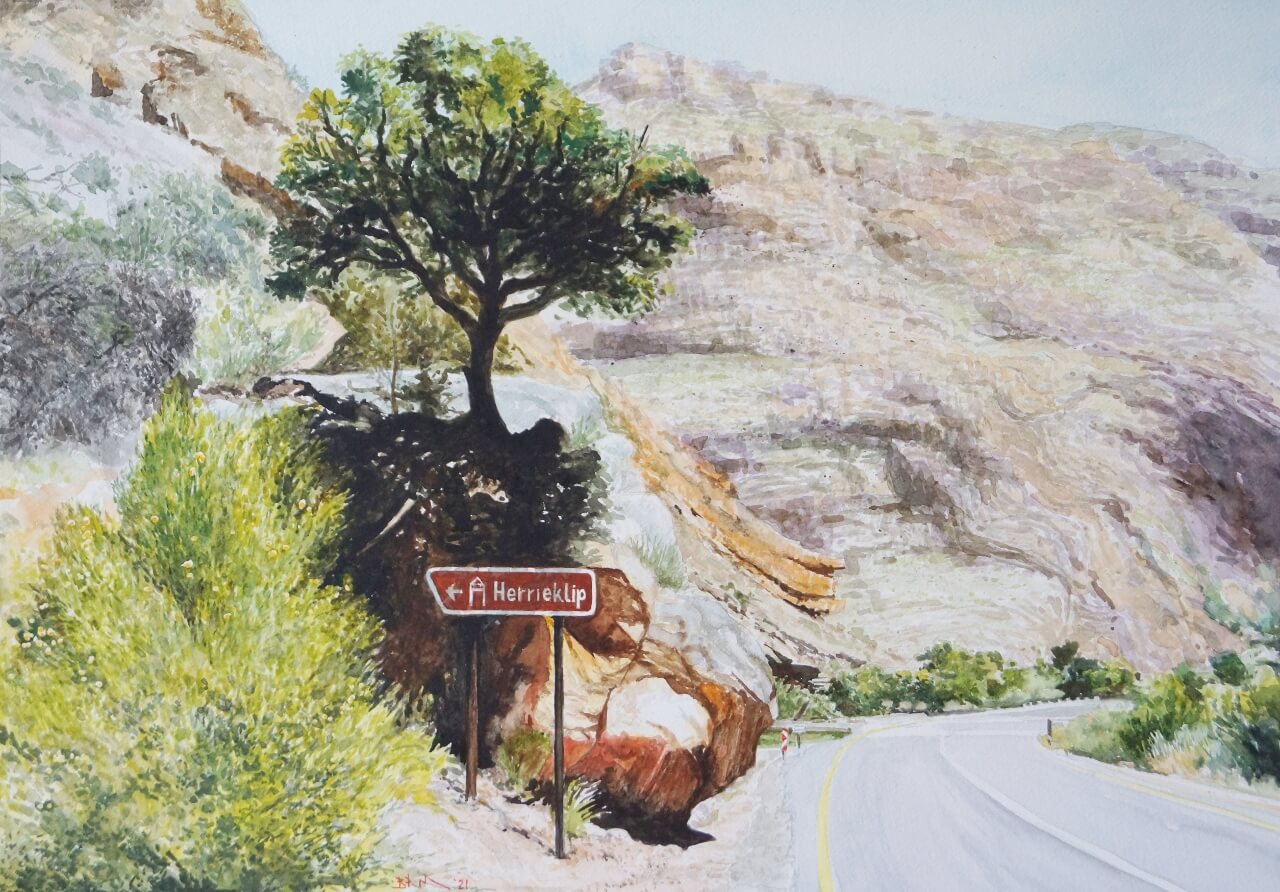 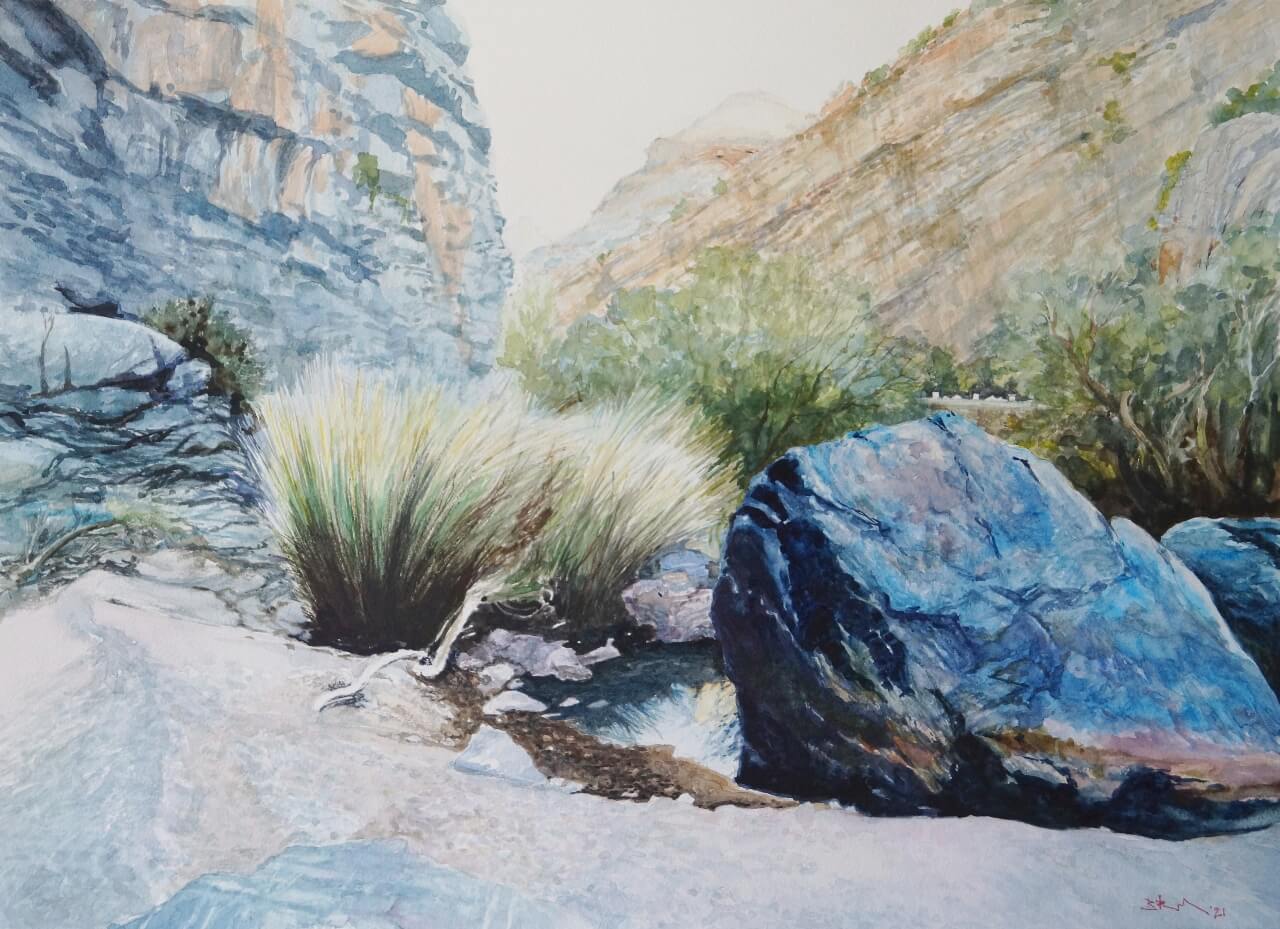