AT FEATURE: Nic Fredman: A Retrospective

AT FEATURE: Nic Fredman: A Retrospective

Cape Storm.Oil on board. 8x28cm

Nic Fredman is showing a collection of oil paintings and mixed media pieces in a show entitled “Nic Fredman: A Retrospective”.
Showing from October the 30th till November the 30th.

The majority of paintings on show are comprised of small panoramic landscapes produced over the last 3 years, many of them through the Covid lockdowns.
The other work was produced over the years when Nic returned to Cape Town in 2003 after living in London for 28 years when he set up studio at ‘The Old Breweries’ in Woodstock.
This work is comprised of four themes: “Small Landscapes”, “The Dark Rooms”, “Woodstock Anthills” and “Artefacts and Reconstructions.”

The Dark Rooms
Nic says: “ ‘The Dark Rooms’ are a body of work initiated when I was working in my London studio and drew inspiration from those artists inspired by the ‘WunderKamer’ and ‘Cabinets of Curiosities’.
I would spend hours in the wonderful museums of London, the Victoria and Albert, National History and especially the Museum of Childhood in Bethnal green with their marvellous collection of Victorian dolls houses. These paintings are of imagined, invented rooms or Dolls house rooms.
They tend to have a darkness to them where shadow rather than light predominates. 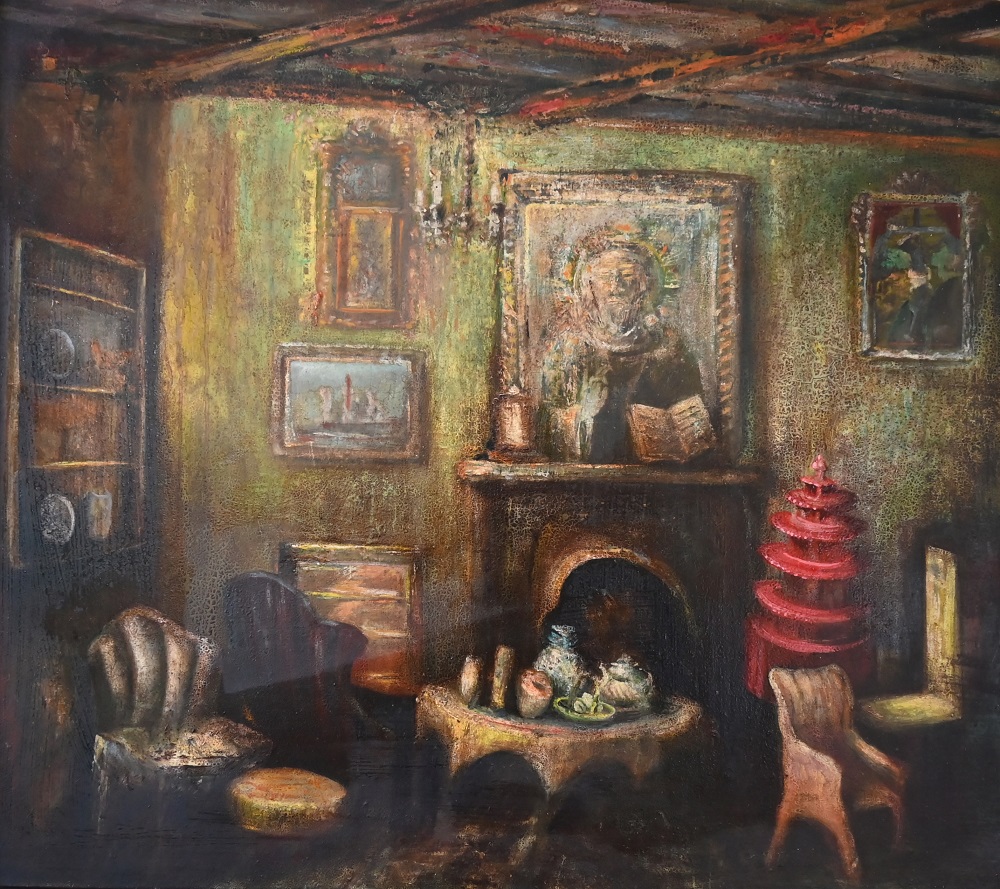 “The body of work titled: ‘Woodstock Anthills’ are paintings on prepared paper using images of Woodstock, with fragments of the landscape, textures and overlays.
These paintings were started in my Woodstock studio and draw on the surrounding landscape and fragments current in my imagination at the time.
I had a great studio, once used by Cecil Skotnes in an annexe of the Old Breweries Complex.
Working in the Gothic, Old Breweries building had its own inspiration but I would garner images on my daily walks around the neighbourhood. I was particularly drawn to small details from facades, shop windows and street corners” 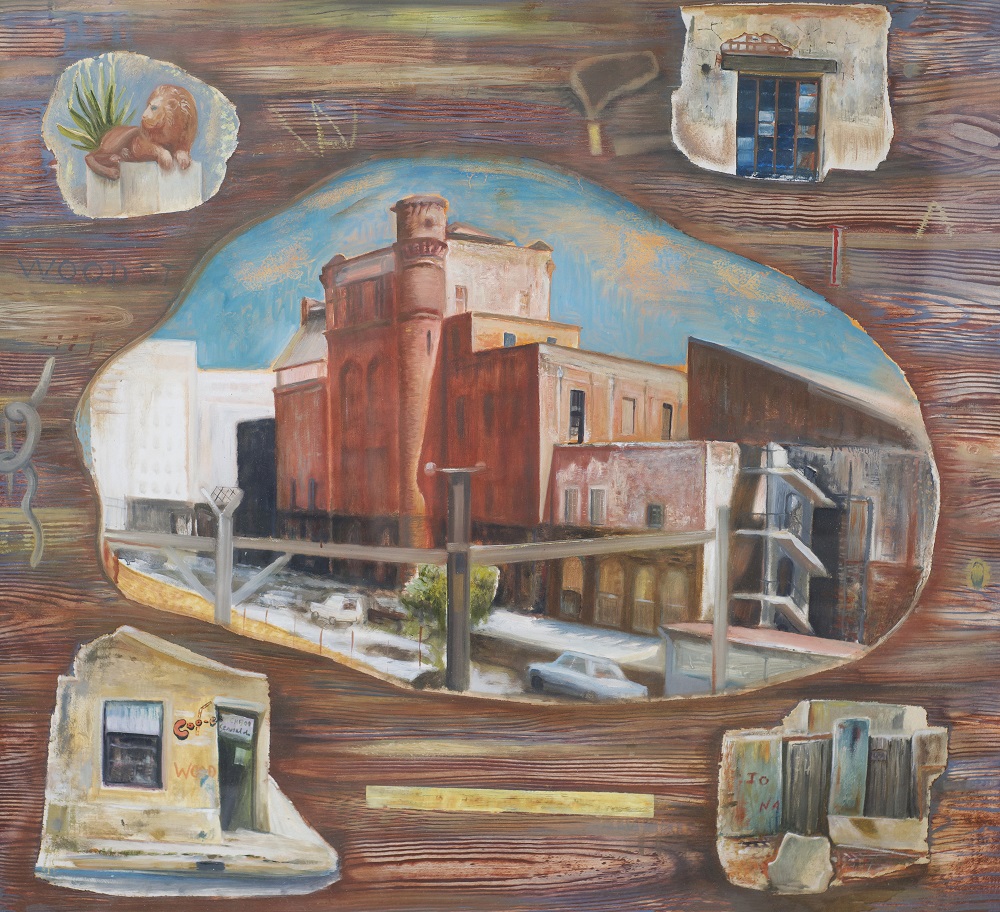 A series of paintings and constructions using found objects and paint, and collage.
In 2011 I exhibited some of these constructions at the Design Indaba. Whereas those were 3 dimensional, sculptural and some real cabinets, these painting are largely collaged matrixes. Some resemble diagrams; others recall the printer tray grid where disparate objects and images have been forced to coexist.
I will be showing several mixed media works on paper as well as work constructed on wood using found objects. 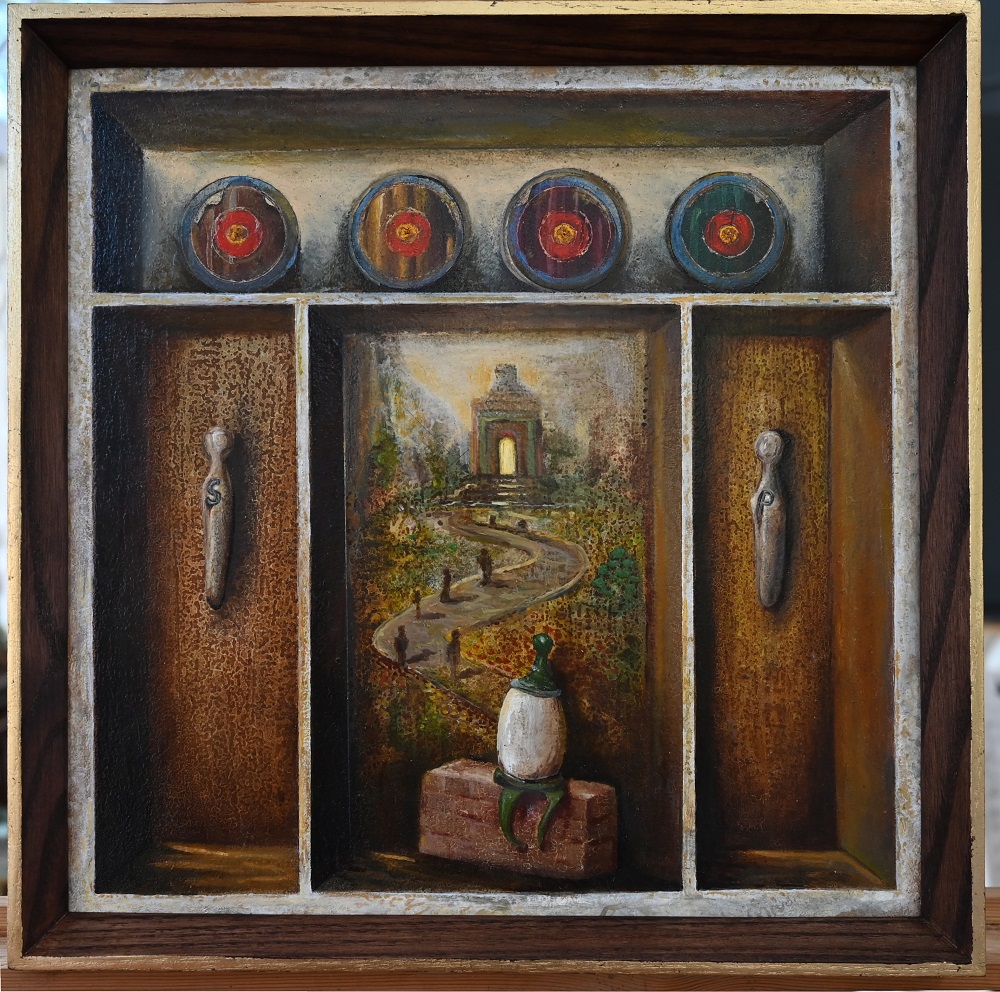 The prime part of the show is a collection of 40 small intimate landscapes. These are all painted with oil paint either on prepared paper or gesso board, 8 cm by 28cm.
Nic says” The landscapes marked a return to a fundamental bearing within myself. Not just with the subject but also with traditional technique.
Whereas the earlier work had been about invention and manipulation of colour, form and material, painting the landscapes was a direct response to the need to simplify the process. To get back to basics. I had seen a small Breughel landscape in a museum and was knocked out how such as small painting could carry such a sense of largeness.

Cederberg sunset.Oil on board. 8x28cm

Ships passing off Clifton. Oil on board 8x28cm

“Many of these were started when I had to spend months in London while my daughter was having treatment for her Lymphoma, small work was easier to carry back and forth and easier to make sitting at the dining room table. I carried on the practice during the first Covid lockdown when my dining table became my studio. Drawing into a smaller space was also about yearning for the unbounded horizon. The smaller size encourages intimacy and making them is also about drawing inwards to reflect an infinite place and the idea of hope in a small artwork.”

They are an emotional response to landscape that has meaning to me about where I exist in the world.

The show will run for the month of November at No 6 Spin St in Cape Town.