Our journey begins in North Africa. Here artists often work in contexts charged with multiple of constraints. They can easily find themselves in war zones and regions fraught with conflict. These Geographical discords give rise to deeper inner conflicts like a crossroads of tradition or political censorship. As a result North African Artists either have to work in exile or exhibit in foreign countries.

The title Odyssey refers to a long and adventurous pilgrimage home after war, as the ancient Homeric Poem narrates. Our visual excursion begins in Magnetic North where the first documented history in Africa uproots and extends to Southern counterparts. Odyssey explores dislocation, nostalgia and a Romantic longing for past homelands, traditions and fading memories. It resembles an attempt to conjure up the past, document their memories and histories of the motherland.

Egyptian artists of the twentieth century have embraced and rejected European styles with an underlying quest for freedom that sets them apart from their European counterparts. Inspired by a variety of forms, symbols and  ideas Morocco has always been a melting pot of cultures, represented in sacred scripture and ancient hieroglyphics. Their history and identity is often linked to nature and territory.

Odyssey seeks a spiritual route, rather than material representation. Artwork can be distinguished by the mystical quality of their sculptures, paintings and drawings of their own respective fields. The symbols of prehistoric writing and engraving evokes a feeling of deja vu, while dreamlike imagery reflects their mystic practices. Use of symbols to celebrate life can be seen in collective use of plants, fruits, trees and adjacent symbols, while bright colors celebrate the cycle of life transcending historical timelines.

Our journey through Africa has highlighted how culture, politics and history of a country influences the psychological mindset of its inhabitants. These influences determine how we perceive the world, ourselves and others. Our aim is to underline the uniqueness and find the common thread that unites the voices of African artist. As creators our perceptions, awareness and imagination of the above often translates in our work, as Hussein Salim states: “I paint for the recognition of the imaginative, the recognition of others and the recognition the humane.

Odyssey begins at in the front space of the gallery and extends to the back where the works at Eclectica Contemporary will be rotating artists from the African diaspora continuously throughout the exhibition.

Ibrahim Khatab
Ibrahim Khatab was born in Cairo 1984, works as a co-teacher at Cairo University. He works across the mediums of painting, video art and installation. Khatab has been practicing since his youth – when he was 12 years old, he created billboards on cloths and walls that were put up in the streets of Cairo. This experience at the beginning of his practice continues to influence his work and ignited his passion for the Arabic calligraphy which can consistently be seen reflected in his works. Since 2007, his work has been presented frequently in group shows and solo exhibitions.

He has garnered notable recognition locally, exhibiting across various art centres and galleries in Cairo, but has seen impressive exposure abroad, having exhibited widely – from Sweden to Cape Town to Oman. He has regularly participated in the annual Youth Salon, Cairo, and has also led many workshops in Visual Arts Center, Oman; Fine Arts Association, Doha; and Sharjah Children Biennial (2013). He has been awarded various prizes for his work and in 2018, obtained his PhD from Cairo University. Khatab is currently resident in Cairo, Egypt and represented by Eclectica Contemporary in Southern Africa. 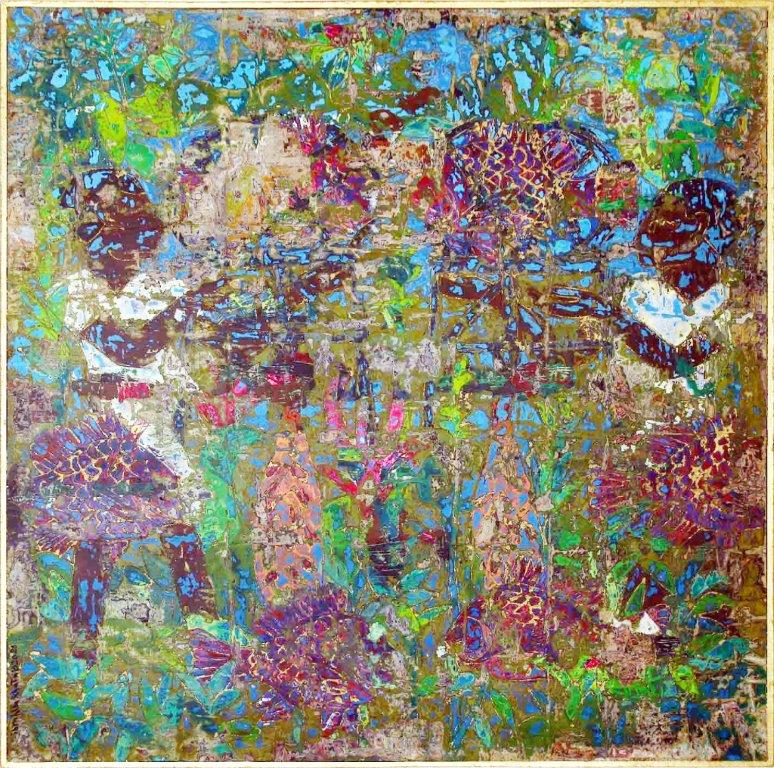 Hussain Salim
As a result of a tumultuous political and economical period in Sudan, which also brought about disputes of its historical context, Hussein Salim spent a number of years as a refugee in various countries including Egypt and South Africa. Following his artistic training in Khartoum University, he attained his Master’s degree in art at the University of Kwa-Zulu Natal, Pietermaritzburg. He has exhibited extensively overseas along with acclaimed local galleries, such as Johans Borman and Bonisa Private Gallery.It was during this time that Salim and his family embarked on both an emotional and awakening return back to his homeland, Sudan.

Inspired by its diversity and diasporic, multicultural communal structure, his body of work celebrates this through extensive layering of symbols, rich colours and vivid forms. Following the example of graciousness, humility and resilience of the Sudanese, Salim has worked closely with NGO’s such as African Angels and Buccaneers Outreach program, whom focus on the sustenance and uplifting of children and schools in marginalized communities with proceeds of his artwork sales being donated to various outreach schemes. 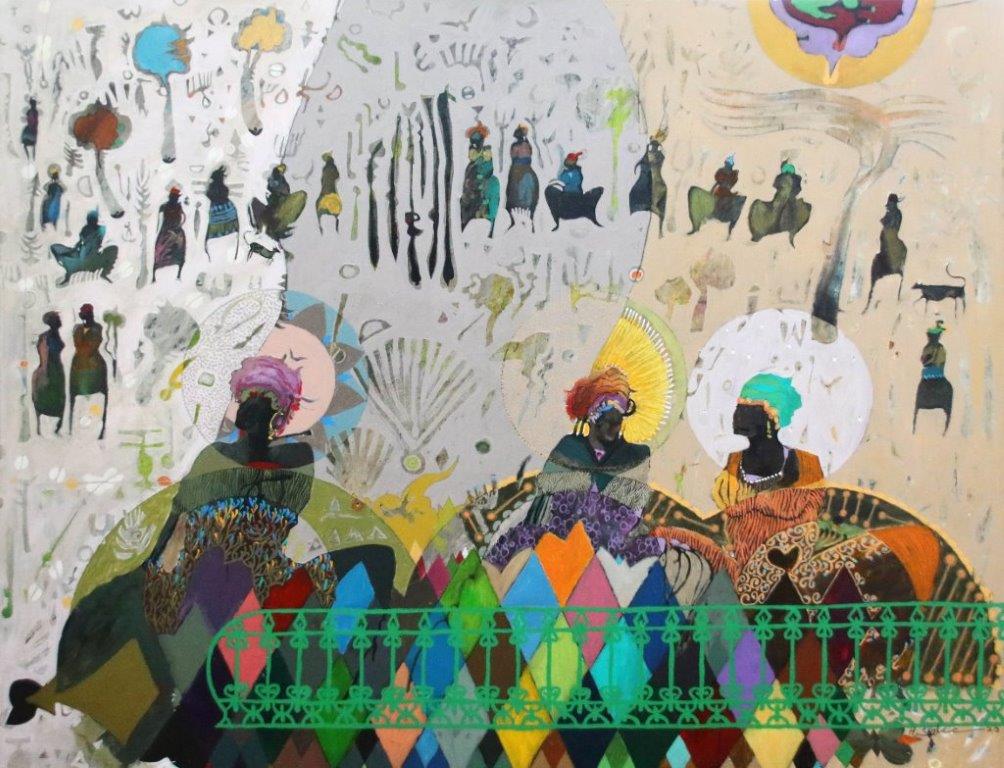 Mimouni El Houssaine
Mimouni El Houssaine lives and teaches fine art in Montpellier although he travels constantly between the two Mediterranean shores of Morocco and Europe. These constant coming and goings are reflected on his canvases in a game of symbols, spattered written texts and horizons in perspective. Mimouni’s work weaves the intricate dialect of yearning for other shores, spurned on by the desire to leave, to return or simply of dreaming of being in a different place. He explains, “yearning for the other shore, is a translation of my thoughts of returning to my country, going back to my roots. It also symbolizes a return to the light, so very unique to Africa”.

In his works, the many crossings are represented by means of recurring symbols such as canoes, bundles of sticks or ladders reaching for the sky. Painting, collage, materials and text are combined in a score etched in the heart of one for whom the quest for the invisible seems more irrepressible than ever. Each curve is a meditation, the slightest trace a search towards an elevated state of mind susceptible of reaching the sky. Taking inspiration from his travels, but also from music, Tuareg sounds, Flamenco and Sufi music, Mimouni’s work is layered with lyrical symbolisms. Timeless landscapes, graphic writing and splashes of colour are open to imagination, peppered with forms and shapes that verge between drawing and speech. The works hold no human figure, but the features of humanity are delicately outlined in every detail.

Kamal Al-Feki
Artist Kamal Al-Feki was born in 1984, earned a Bachelor Degree in fine arts 2006 Sculpture Department field,fine art college, Helwan University with honors. He has been an active member of the Syndicate of Fine Artists in Cairo, joined the (academia d’Egitto) in Rome, Italy (2016) and participated in many exhibitions and international cultural figures inside Egypt and abroad from 2007 to now.

El Feki’s sculptures is an attempt to capture the familiar yet foreign concept of waiting. The artist evokes the viewer to become content with the uncomfortable pause that his weighted figures narrate in their ageless suspension. The sculptures presents the futile, yet adventurous journey of becoming and the perpetuating cycles of human desire that accompany that role. Kamal’s Sculptures illustrates human life cycles as a concrete plexus of events and desires. They draw us into a state of stillness, anticipation and entraps the viewer in a dormant state of reflection. 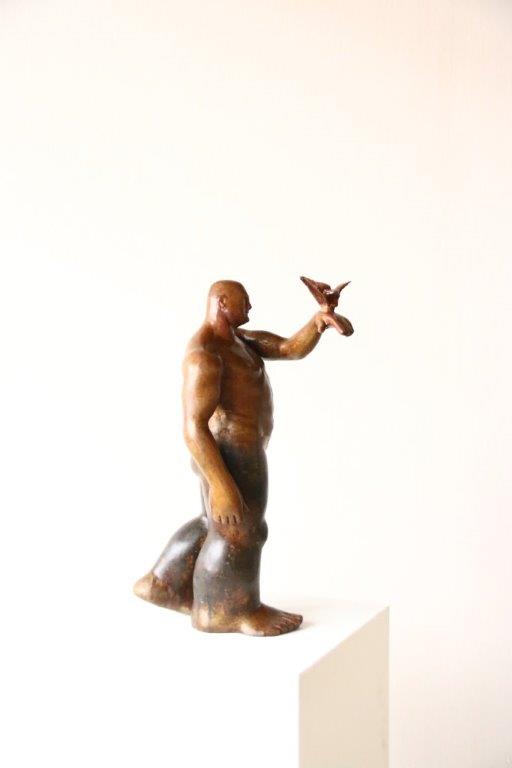 Mohamed Rabie
Mohamed Rabie is an artist deeply engaged in and interested with the identity and symbolisms of his home town Minya in Egypt. He was born in Minya in 1986 and went on to study at Cairo’s Faculty of Fine Arts and is now also a member of the Fine Arts Association and the General Federation of Arab Archeologists. As such, his interest and passion for the arts goes beyond his multilayered canvases, while also contributing to and informing his creativity as he works. 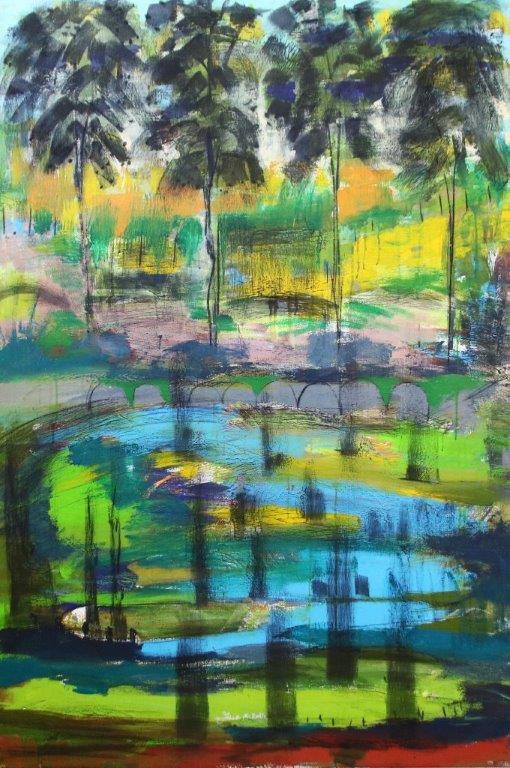 His painting practice borrows from different eras and cultures present within his rich heritage and grapples with questionings of historical entanglements and contemporary geographic dynamics. Looking at the theme of ‘Egyptian heritage’ his work includes a querying of graphic texts and visual languages, translating them into a contemporary context. Using broad brushstrokes and large swathes of colour across the picture plane, Rabie offers fragmentary clues from history, and re-articulates them within the gestures of his work. This results in a strange sense of familiarity and recognition within each painting, as though recalling a forgotten story and familiar narrative.