AT FEATURE: Oliewenhuis Art Museum are commemorating Youth Month 2022 by focusing on artists that created remarkable artworks at a young age.

AT FEATURE: Oliewenhuis Art Museum are commemorating Youth Month 2022 by focusing on artists that created remarkable artworks at a young age.

Age is only a number – You can make a difference!

Oliewenhuis Art Museum are commemorating Youth Month 2022 by focusing on artists that created remarkable artworks at a young age.

Dumile Feni, had a long career that started early in his life, and he left a legacy of emotionally charged and skilfully rendered drawings and sculptures, significantly enriching South African history of art. Oliewenhuis Art Museum is pleased to have some small ballpoint pen and pencil drawings, as well as a beautifully rendered bronze sculpture, Itchy, by Dumile Feni in the Permanent Collection. Dumeli Feni was already showing his unique talent from age 23 when he created the drawing Mother and Child and the bronze sculpture, Itchy, at age 24.

In 2009, these 8 artworks (as part of a donation of 51 artworks), were donated by Fernand Haenggi from his private collection. This donation followed a donation of 295 artworks from The Haenggi Foundation Incorporated (Basel, Switzerland) in 2006. Being part of a private collection the Dumile artworks include interesting media, such as Untitled, in blue ballpoint pen on the back of a Gallery 101 visiting card, and a double-sided artwork, Late & Frightened in blue ballpoint pen on board.

Dumile Feni was born in 1942 in Worcester, Western Cape. In the early 1950’s he moved to Johannesburg and began working as an apprentice at a foundry where he learned to model clay. Dumile was then introduced to bronze casting and met the gifted artist Ephraim Ngatane. They remained lifelong friends. In 1963 Dumile contracted Tuberculosis and while in hospital he was given art materials and painted murals with Ephraim Ngatane, and this is seen as the start of his career.

Between 1965 and 1968 (before he turned 30), he had numerous solo exhibitions amongst others at the Durban Art Gallery, Pretoria Art Museum, and the Goodman Gallery, Johannesburg. In 1966 and 1967 he presented solo exhibitions at Gallery 101 – a gallery founded in 1961, by Fernand Haenggi and his mother, Mrs. F.M.L. Haenggi, to showcase modern South African art. This is where the artworks in our collection originate from.

On his return to Johannesburg, he faced possible deportation to Queenstown or Worcester under the notorious Pass Laws. He decided to go into voluntary exile in London early in 1968. There he again enjoyed success and recognition, showcasing his work amongst other exhibitions, such as the Grosvenor Gallery and Camden Art Centre. In 1979 he relocated to the United States. In 1991, shortly before his planned return to South Africa, he died from heart failure while shopping at his favourite music store, Tower Records in New York. His body was returned to South Africa and he is buried in Johannesburg.

Dumile’s influence on other artists was far-reaching and artists influenced by him included peers such as Julian Motau and Enoch Tshabalala. William Kentridge was profoundly moved by a large-scale charcoal drawing by Dumile that he had the privilege of seeing as a young boy, and still acknowledges the continuing influence of Dumile in his own artistic career.

In his insightful publication, Neglected Tradition: Towards a new history of South African art (1930-1988), art writer, Steven Sack, addressed the merits of South African art of the sixties and seventies and articulates his assessment of Dumile’s role in the following terms: The master of turbulent imagery was undoubtedly Dumile Feni, who was known as the Goya of the townships. His apocalyptic vision talks directly of personal experience, indicating the extent to which the political and the personal had become inextricably intertwined (1988: 17). 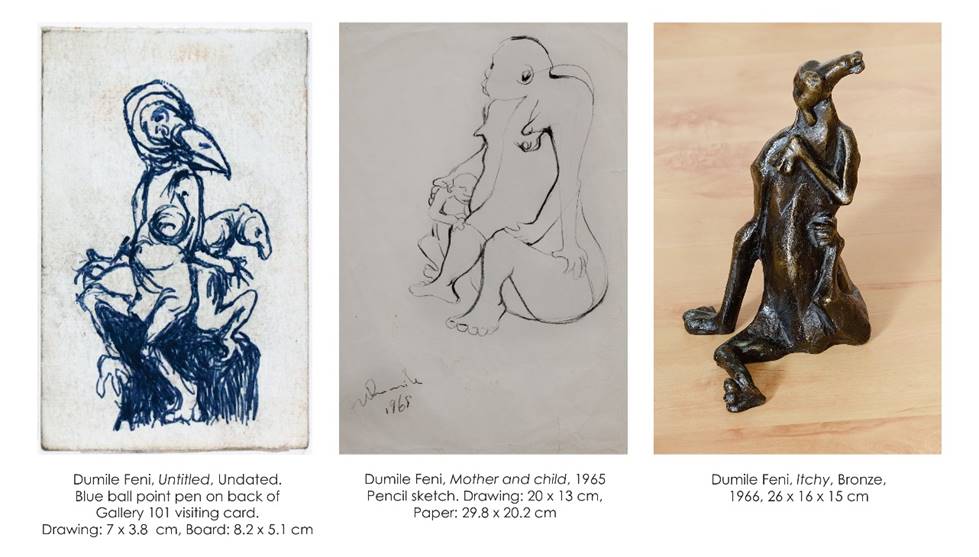 Dumile (Zwelidumile Geelboi Mgxaji Mslaba) Feni (1942 – 1991), DUMILE: ARTIST IN EXILE (2019).
(This text has been extracted from the catalogue: Dumile: Artist in exile, written and published by Bruce Campbell-Smith in association with Art on Paper in 2004). Available from: http://www.johansborman.co.za/artist-biographies/feni-dumile/
Maurice, E. Compassion in fine lines, MTN ArtTalk, 6 (1): 2-3