The Melrose Gallery is proud to announce the representation of Oscar Korbla Mawuli Awuku, an artist and cultural activist, who has become known for his ability to tell stories of Africa through his unique style of body art which he calls Anansinisim.

“Inspired by the West African folktale character “Kweku Anansi” (or Ananse) the Spider. Anansi is an Akan name given to the spider. In most Anansi tales, he is depicted as a trickster who finds himself in difficult situations but manages to extricate himself out of them by either outwitting the powerful, unsuspecting, and gullible, or by morphing from human to spider form and climbing out of reach. These unsavory character traits notwithstanding, Anansi should also be recognized for his resourcefulness and ability to creatively adapt to new situations. Indeed, some Caribbean cultural scholars have compared these qualities, that is, the ability to “survive and thrive under debilitating circumstances,” be it through con artistry or strength of character, as typifying the essence of Caribbean peoples, especially Jamaican (Edmonds 28). The story of Anansi holds visual symbolism for Awuku as he fuses visual networking designs of the spider with historical Ghanaian Adinkra symbology to create personal transitional designs on the body that re-echo the knowledge and wisdom of our ancestors that are gradually losing their sustainable values and norms to contemporary audiences.” (Harvey, 2005) 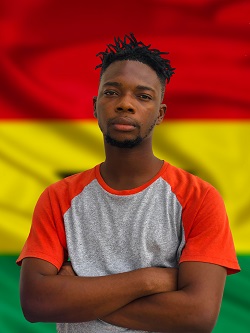 Oscar Korbla Mawuli Awuku,Artist
“My experimentation with body art has been largely informed by the historical and design decisions that have characterized the production of Ashanti and ewe kente cloth. This includes the weaving process where threads are thrown over and beneath others in a repetitive, rhythmic manner to form patterns and shapes in the overall design.” – Oscar Korbla Mawuli Awuku (Sedode, 2022)

As a women’s rights advocate, Awuku through his painting also tells tales of great African women. His work portrays the advocacy and empowerment of women in order for them to stand equally for leadership roles just like men do in society. Thus he makes an intentional effort to put women at the forefront of his work. (Sedode, 2022)

Awuku also loves to put on the African ritual mask when painting, which he sees as a way of showcasing and promoting the rich culture and heritage of Africa. (Sedode, 2022)

“I mostly put on the mask for performance and also it’s believed that the person that wears the ritual mask conceptually turns into the spirit represented by the mask itself. But basically, I just want people who see me in the mask to appreciate our aesthetics and not have negative misconceptions about them because they are part of our culture,” he said. (Sedode, 2022)

About the featured artworks: 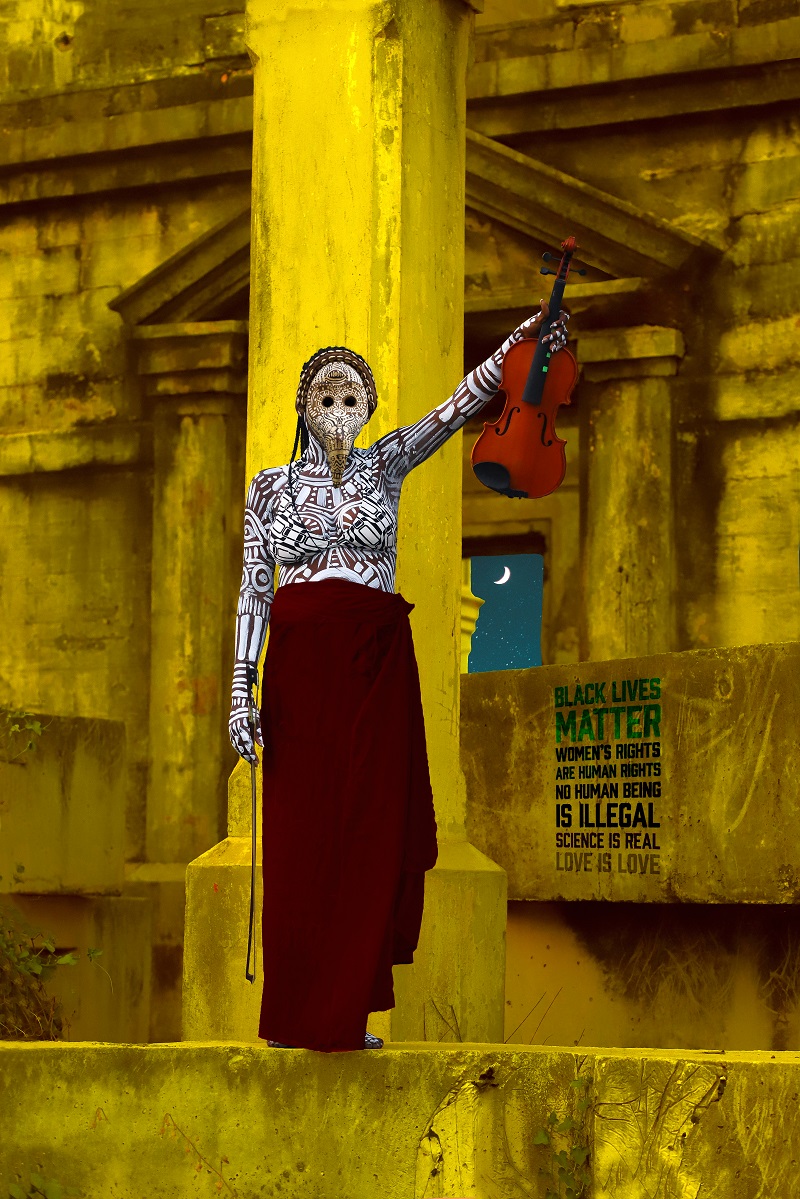 Liberation Songs. The piece is my own artistic expression of using music and classical instrument to liberate the souls of the oppressed. 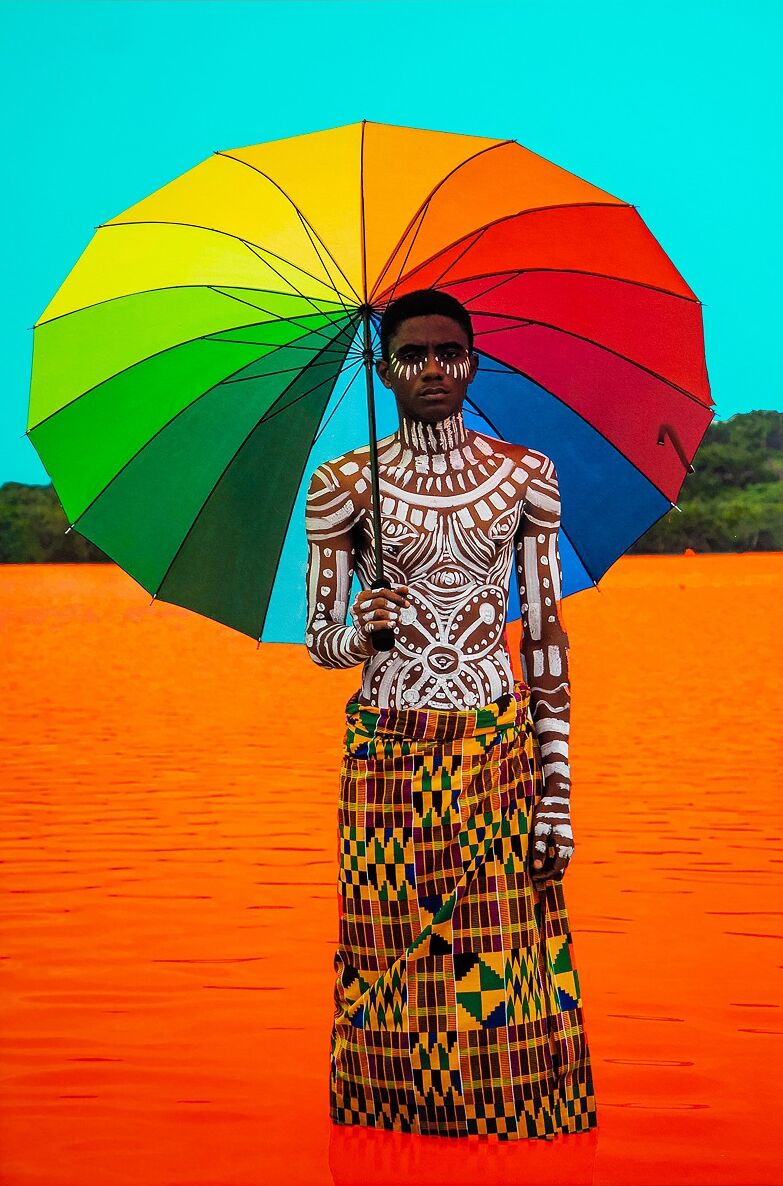 Blue Night The piece captures two women in a ritual mask rocking shoulders with a man in the middle which metaphorically represents the essence of gender equality. The ritual mask which also serves the purpose of cultural identity but metaphorically represents the strong cultural heritage, values and norms that women poses and pass down to generations. 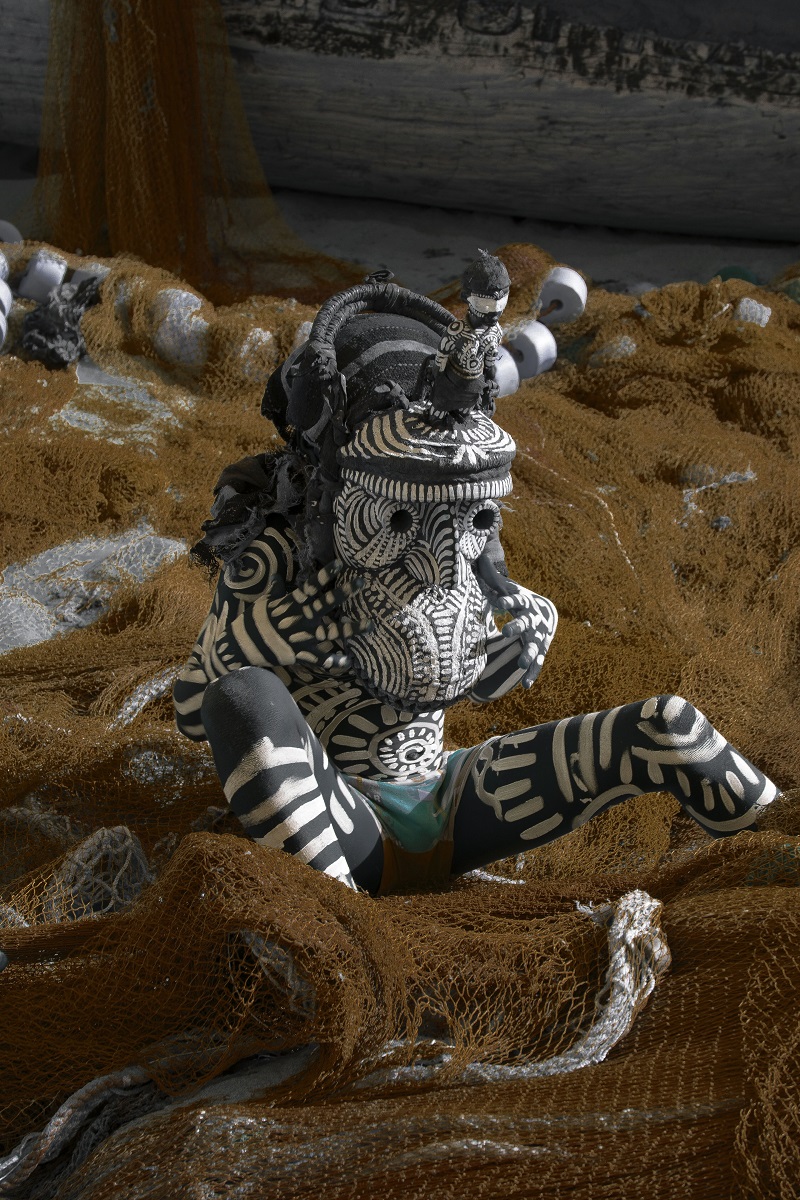 Fixing Nets The piece captures a child fixing nets looking weary of a tedious work. The piece protest against child labor yet highlights how the youth has been stripped away to a horrific experience that this children endure. Pallet Of Drudgery The piece protest against child labor yet highlights how children are made to do hard work at some coastal areas in Ghana, where some children below 18 are made to indulge in fishing for stipends to support their families, and a few unlucky ones lost their lives during the process. 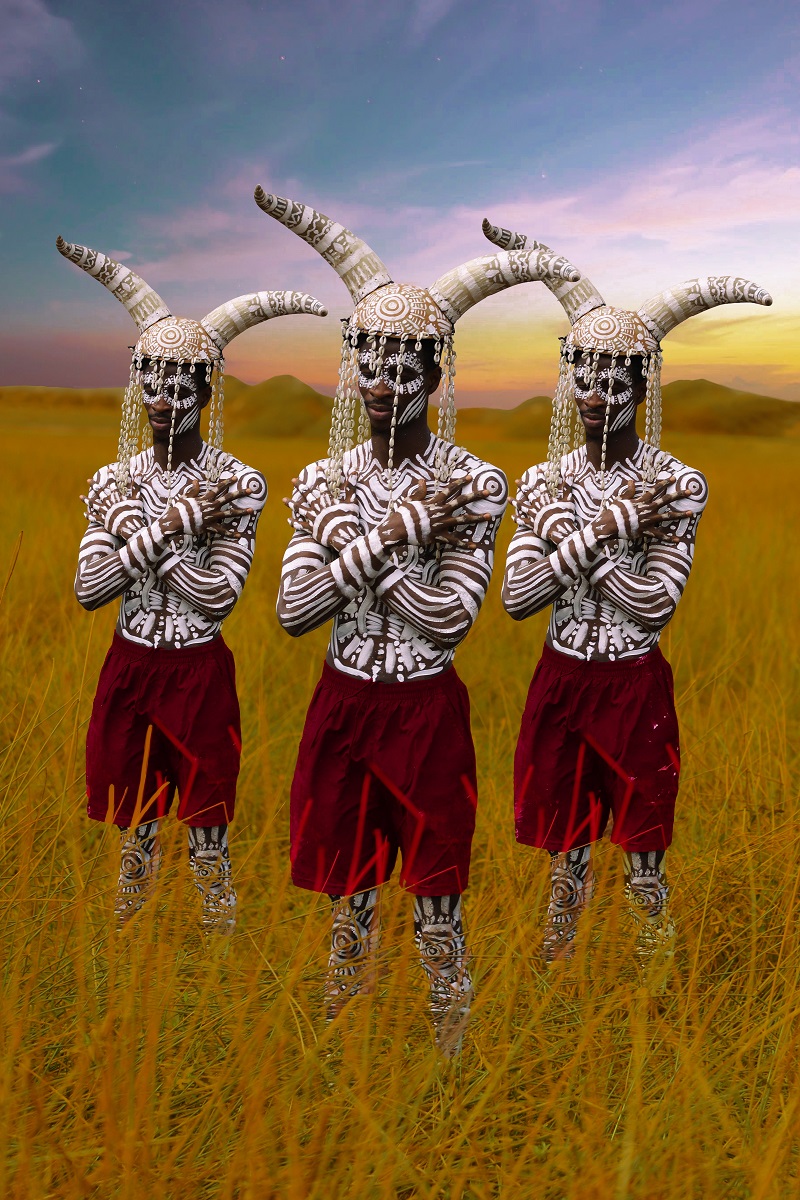 Sons Of Ra The piece is a historic celebration of Ancient Gods in Egypt. It is my own artistic expression of highlighting worshipers Of Ra. Ra (also given as Re) is the sun god of ancient Egypt. He is one of the oldest deities in the Egyptian pantheon and was later merged with others such as Horus, becoming Ra-Horakhty (the morning sun), Amun (as noonday sun), and Atum (the evening sun) associated with primal life-giving energy.