Phatshoane Henney Attorneys, in association with Oliewenhuis Art Museum, the Free State Art Collective and the Art Bank of South Africa, invites new and emerging Free State artists to enter the 2021 New Breed Art Competition and stand a chance of being discovered as a new breed artist.

Entries take place from 13 to 19 September 2021 at Oliewenhuis Art Museum in Bloemfontein. Click here for the entry form. Watch the recorded virtual launch here. And learn more about this year’s judges here. 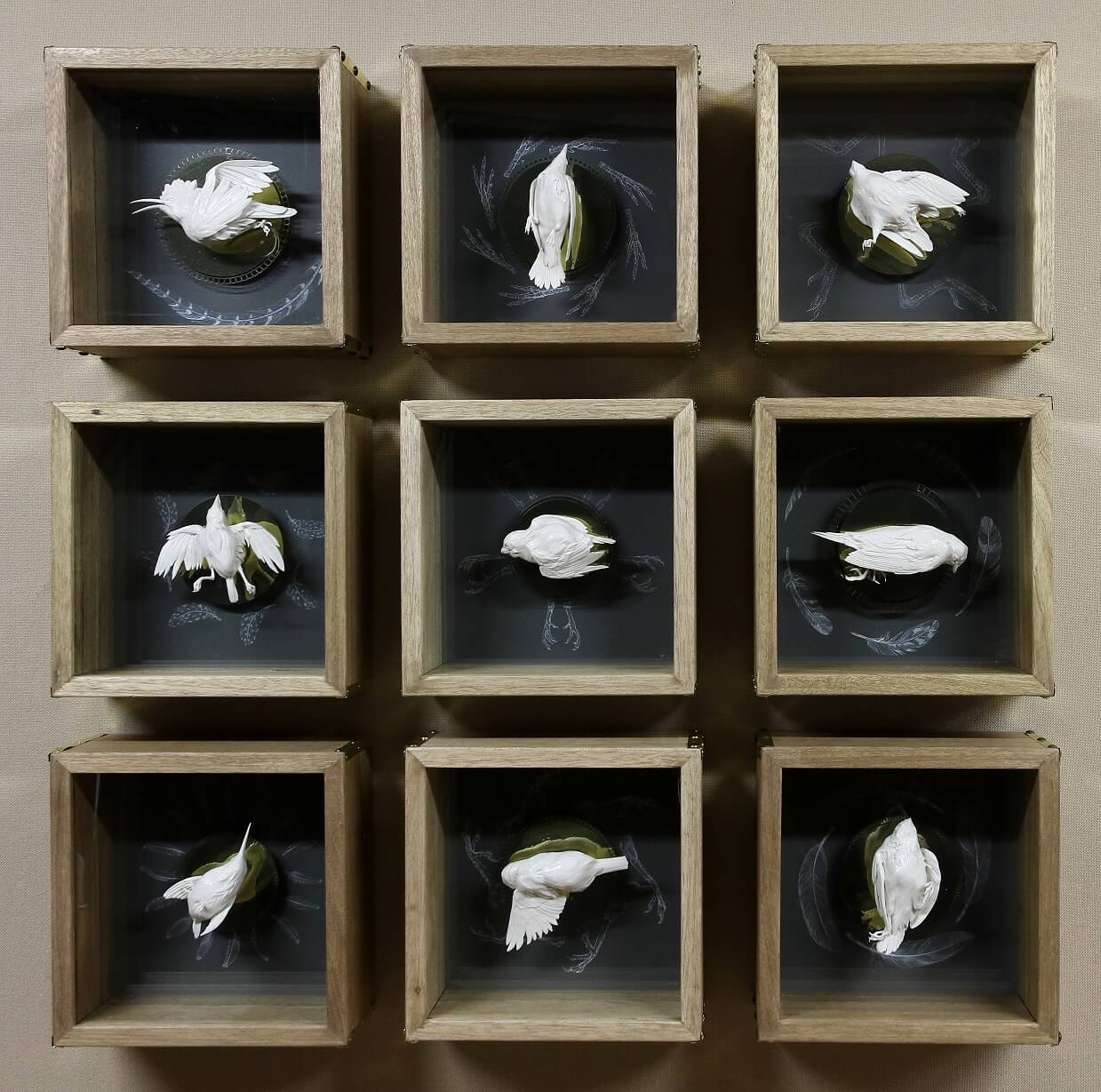 This piece forms part of a recurring Vanitas theme addressed in my works concerning contemporary views on mortality, the brevity of life and human behaviour.

As with all artworks referring to the ‘Carrion King’ it addresses a fictitious deity used to personify the internal, possibly primal element, which seems to reside within most people; the part of us that is stirred to curiosity and sometimes gratification by violence and carnage. Innumerable accidents and atrocities are part of our daily lives and (fictional) death is as always a key component in various forms of entertainment, numbing us to the dismaying reality of human mortality.

This desensitising process has a dualistic character in that often it both repels and excites; it is inexplicable and often denied. The entertainment value of violence and its associations with mortality, whether fictional or real, can be seen to take on the role of appeasing this more carnal, vicarious and obscene nature and understanding within; hence the inclusion of objects relating to the viewer’s insertion into the work, such as for example a reflective surface or memento mori objects such as hair or bone. Various ceremonial, iconographic or ritualistic contexts and elements are manipulated to bring together the many aspects of this theme.

By representing subjects such as sacrifice, offering, and obsession, it portrays the symbolic feeding of internal compulsions, of both the artist and the viewers. The compositions are made up of morbid little ‘gifts’ that denote the hording/collecting of death, here in the form of small lifeless animals; creatures whose vulnerability (and fragile materiality) are akin to that of the human body. The referral to a carrion creature brings about thoughts of predation and the consumption of death itself. It is in my opinion, and from my experience, that opening oneself to the truly horrifying is in itself a sacrifice made unto this ‘Carrion King’.

The act of viewing or choosing to view that which we find most atrocious or frightful becomes the sacrifices we make; of ourselves, unto ourselves, ever feeding the unspoken need within. We immolate little pieces of ourselves to feed this unembodied thing. 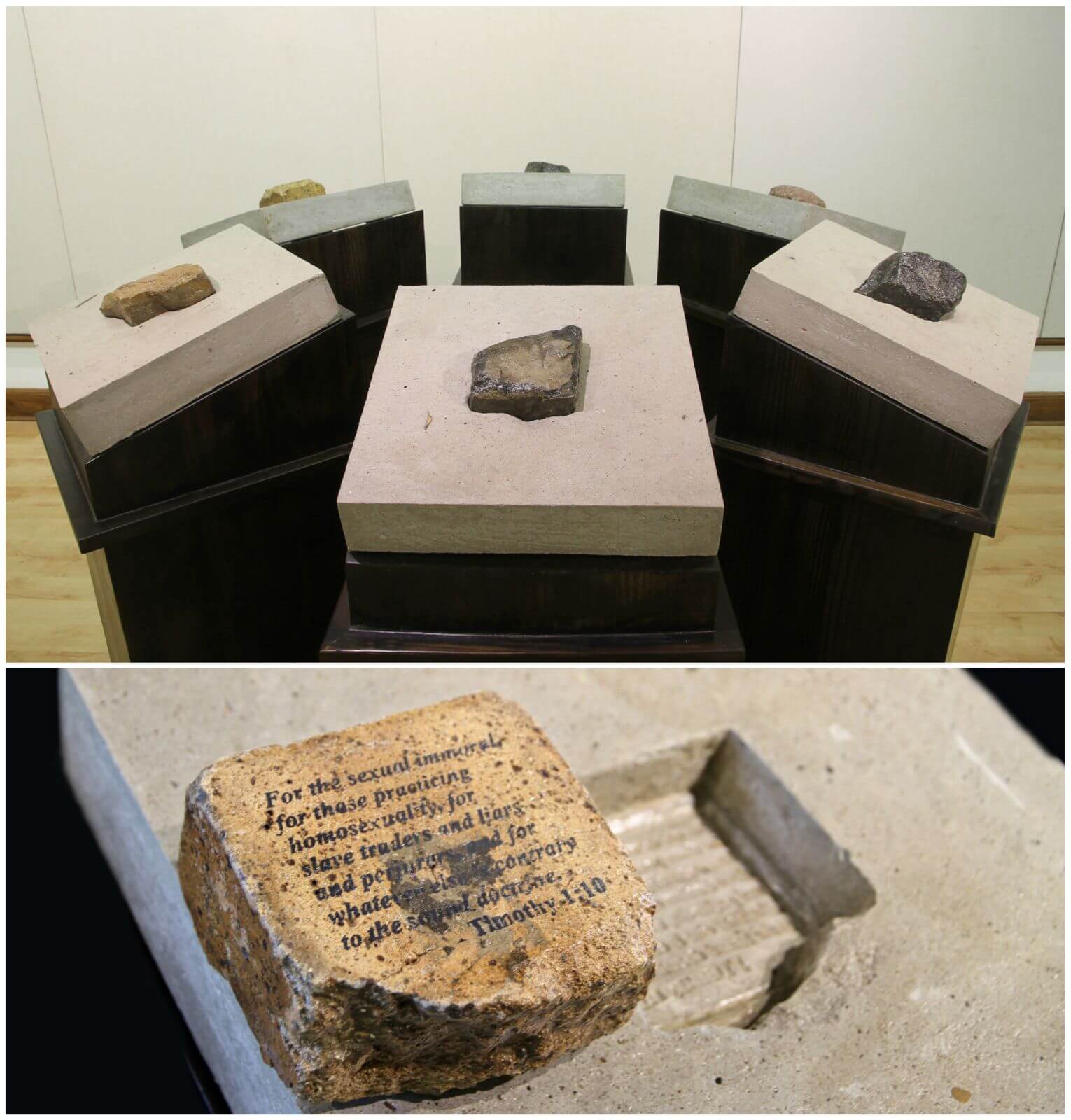 Description:
First Stone: John 8:7 (2016) is a reflection on the weight that is embedded not only in the social criticism and judgment of homosexuals, but also in the deep, painful shame and disgust that is associated with the abomination of being a homosexual individual in the Christian faith.

The title of the artwork First Stone, John 8:7 (2016) is from the very well known Bible verse, “He who is without sin among you, let him be the first to throw a stone at her,” in John 8:7. In this verse the teachers of the law who sought punishment for an adulterous woman, confronted Jesus in a test of his teachings. As adultery was considered a sin and punishable by death, the teachers of the law tested Jesus’s response, while not expecting him to respond in the way that is referred to in the title. They contemplated his response and walked away without condemning the adulterous woman. Condemnation is a key issue in my work as it is an interactive sculptural piece where the spectator is encouraged to lift up the individual rocks or stones embedded in each of the six concrete blocks on wooden pulpits, in a circular installation. While the spectator or participant is physically holding the mildly heavy, hand-sized rock or stone in one hand, they are enlightened by a text or verse from the Bible (New International Version), which is carved away or written in the indentation that the rock has left within the concrete. This is inscribed backward, similar to Hebrew that is written from right to left. The inversion of the text as well as the indentation of the text in concrete which is a very hard and heavy material, seems out of place, and somewhat unlikely. The engravings within the six concrete indentations read as follows:

1. Leviticus 18:22: “Do not have sexual relations with a man as one does with a woman; that is detestable.”
2. Leviticus 20:13: “If a man has sexual relations with a man as one does with a woman, both of them have done what is detestable. They are to be put to death; their blood will be on their own heads.”
3. Romans 1: 26: “For this reason God gave them over to degrading passions; for their women exchanged the natural function for that which is unnatural.”
4. Romans 1:27: “And in the same way also the men abandoned the natural function of the woman and burned in their desire toward one another, men with men committing indecent acts and receiving in their own persons the due penalty of their error.”
5. 1 Corinthians 6: 9: “Do you not know that the unrighteous will not inherit the kingdom of God? Do not be deceived; neither fornicators, nor idolaters, nor adulterers, nor effeminate, nor homosexuals.”
6. 1 Timothy 1:10: “…for the sexually immoral, for those practicing homosexuality, for slave traders and liars and perjurers–and for whatever else is contrary to the sound doctrine.”
This artwork is a powerful statement on the judgment of sin and the tolerance of homosexuals within the church structure in South Africa. The Bible has been interpreted from varying perspectives from ancient times until today and there are many versions of the original text that have been written under strong influence of that time. Religion is a fundamental structure within the culture of most South Africans and this view of homosexuality and the Bible has been used as a powerful weapon against the opposing construct of a healthy lesbian relationship or lifestyle.

Emotional abuse and hate crimes against homosexual individuals have been firmly based on the rules and regulations of specific religious groups which have instilled a ‘corrective’ stance in individuals who have a problem with the unknown or the fear of what homosexuality threatens. Most homosexuals who have come out of the closet or come out to their families have been faced with the very powerful wrath of religion and Bible bashing. This has forced most homosexual believers into a silenced communion or hidden fellowship and has led to the creation of this artwork. Not only does one read a Bible verse that has been embedded within the concrete of First Stone, John 8:7 (2016) backwards, but one becomes involved in the struggle to decipher the illegible writing in the concrete. When the spectator lifts the rock and holds it in his/her hand, he/she is left guessing or wondering what it all means until the spectator takes the time to look under the rock/stone in his/her hand and then only can he/she read the Bible verse from right to left, in legible writing. However the enlightenment in this process of interaction is significant when one realizes the weight of the words one holds in one’s hand. Rocks/stones/bricks are used as a basic tool of violence and defence in many cultures around the world. Because they are so accessible and universal, historically and biblically, a stone has the power to do major damage, to cause injury or even death.

This power has then been placed in the hand of the spectator or participant. Is it possible that the weight of this power that has been given to the spectator or participant could subtly or slowly begin to make him/her reflect and shift points of view on homosexuality? Most people don’t enjoy being confronted with the heaviness of this decision even without having a weapon placed in their hands and asking them to contemplate their judgment or criticism. 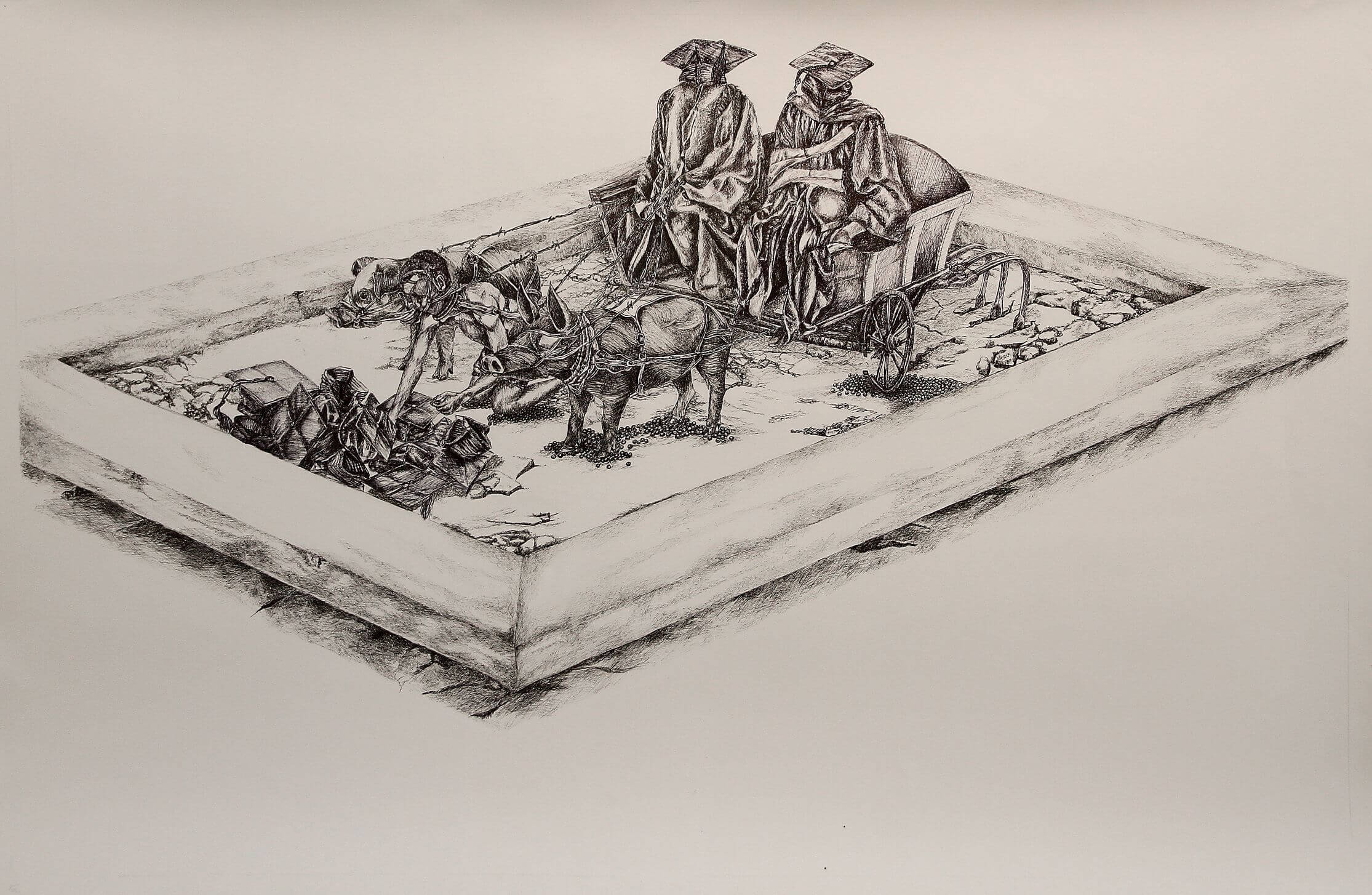 Description:
This concept is influenced by the youth, education and the struggles that the youth are facing. I made use of graduation garments without anyone wearing it. This garment is taking over and driving a human and two pigs. The person is kneeling down eating with these pigs, but there is no food to eat. All there is is a graduation hat. This symbolises their struggles such as being jobless even with their certificates, diplomas and degrees. The use of pigs to me symbolises survival, because pigs eat anything they can find.

The pigs and the person are taking the space of a horse and are also blindfolded, as they are controlled by these garments which are pulling them with barbed wire.This wire symbolises pain due to the mark it leaves behind on the skin. If not careful, this type of wire can cause crime and poverty. In this drawing, everything inside the frame is slipping on the dry land. The graduation garments are on a trailer going forward, leaving behind problems and holes with no solutions.

The concept I try to bring forward hereby, is that we as the youth should protect ourselves by being open-minded and not focusing only on education, but adding to it by applying and developing our skills in order to contribute to solving the problem. 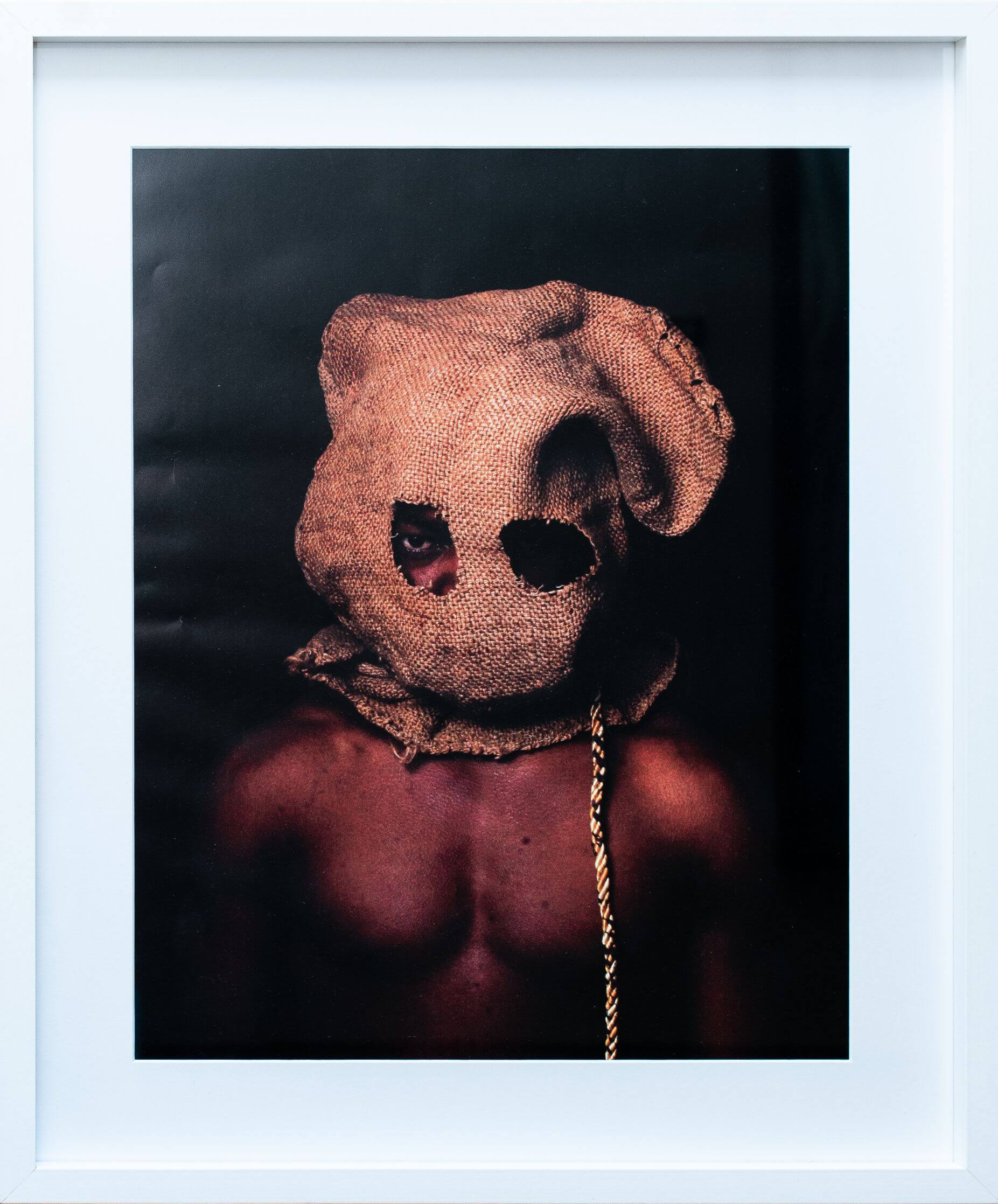 Description:
The suicide mask is influenced by the lives of the late teenage and early adult age. Peer pressure becomes stronger at that age, when the youth are leaving high school for college and university. The mask represents the identity of all teenagers who are lost in fantasy and peer pressure, with an unidentified face under the mask being all about hidden emotions and presenting a fake self to the world.

The work shows the suicide thoughts of a person at an adolescent stage, fearing to miss out on fun. The suicide rope is around the neck but not hung up, to show that there is still hope that these suicidal thoughts can still be escaped, although the body language seems to speak of having given up. The dark background depicts loneliness that cannot be escaped easily.

The mask covers the entire head, with two holes cut out on the eyes only. One is clear and the other has faded into the mask, this idea tells us that people see everything that is happening to them and to others, but do not see the danger of it. The mouth is covered because depression is getting heavier and people do not talk about it, the nose as well is covered as these people suffocate from mixed emotions and they cannot accept the reality of this world and its responsibilities.

The body seeming to fade into the background bring to mind the isolation that introverts prefer. No clothes and the use of skin it bring out the relative pain that everybody has been through when they are lonely, heart-broken or betrayed. The use of skin and the dark background talk loudly about the privacy and opportunity that people get to redefine themselves, although that can be depressing. People visit their true beings in thoughts and begin to punish themselves for bad things that they have been through.