An exhibition that brings together three distinct bodies of work connected by looking: the painter’s imperative.
Toying with fantasy and reality, participation and observation, this show invites one to look both more closely and more widely at the intimate, the interpersonal and the societal.

Due to the current level 4 lockdown restrictions that came into effect today, we unfortunately have to postpone our exhibition. Disappointing as this is for all of us, we cannot ignore the current state of the pandemic in our country and the devastating consequences it is having for so many people. We will send out further communication as soon as a new date is confirmed for the exhibition to take place, and we look forward to seeing you then!

Yoram Shabat
My subject matter is people. Through figurative portraiture I explore my own notions about identity, what I like to describe as the “Theatre of Identity”. The interplay between who we think we are and who we think we should be and how the interaction of these two thought pathways leads us to a multitude of societal neuroses, insecurities and fears which manifest in our manufactured expressions, our choices, fashion sense, language, behavior etc. These manufactured expressions function as a symbolic language, offering clues and insights into the true nature of the subject which need to be deciphered by the viewer. We gather around us the ideas and paraphernalia of everyday life that most resonate with us to try and project an image to the outside world that best represents who we think we are as well as who we think we should be. The spaces that we occupy are inhabited by these manifestations and become an extension of ourselves, hence the spaces that I surround my subjects with are purposely staged and viewed in a dramatic, theatrical way to convey the idea that the world is a stage, and we are all actors in it.
Yoram Shabat is an Architect and Artist based in Cape Town. 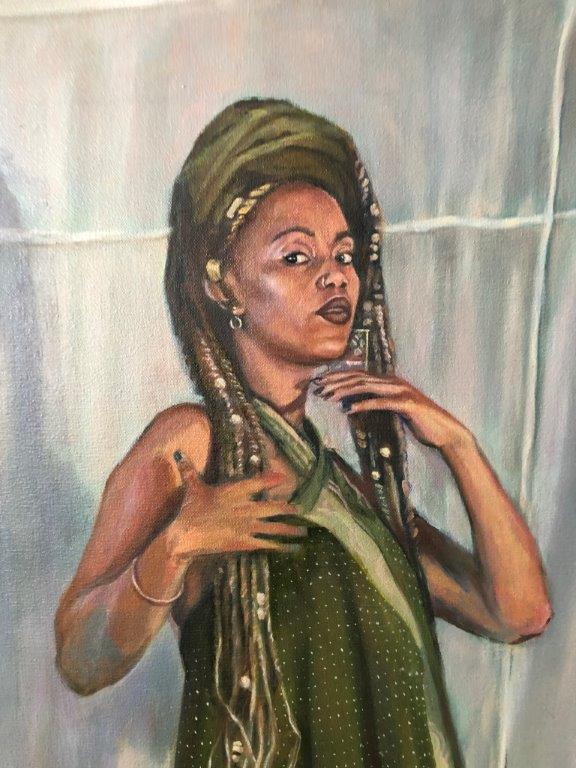 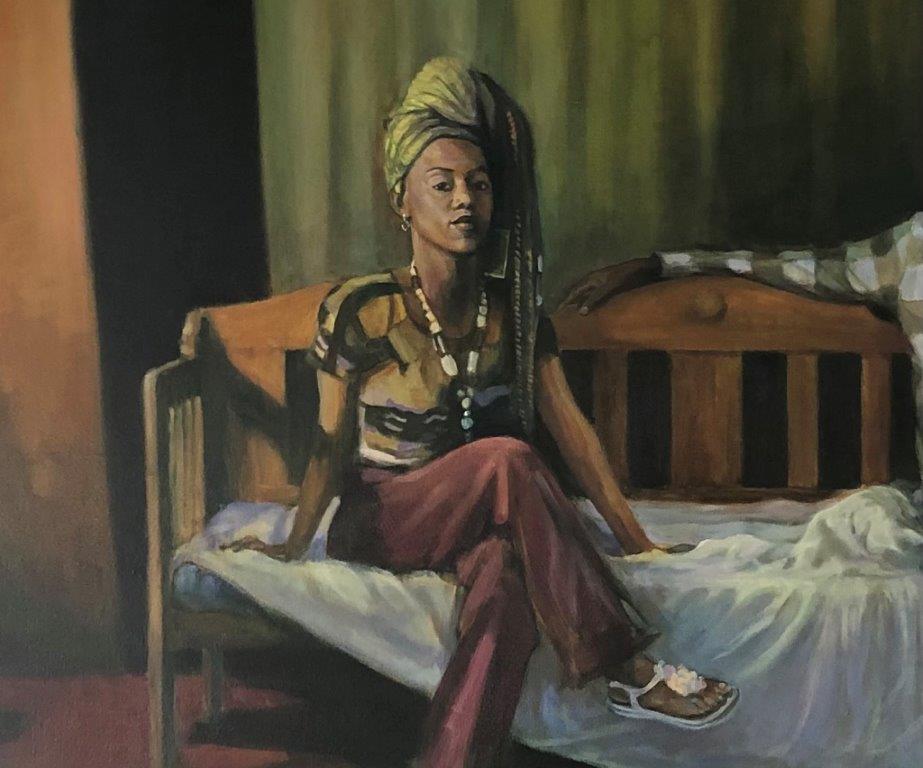 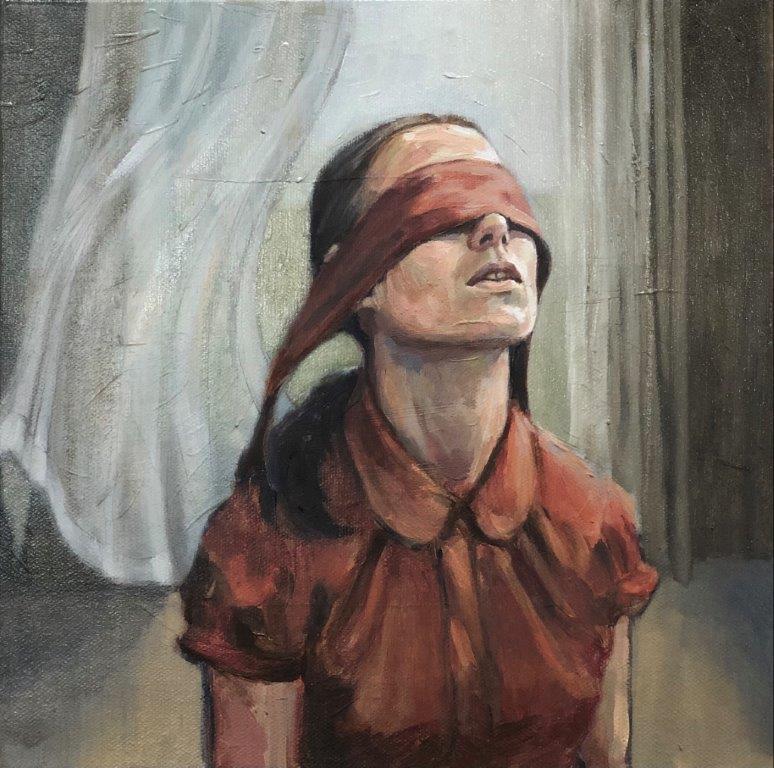 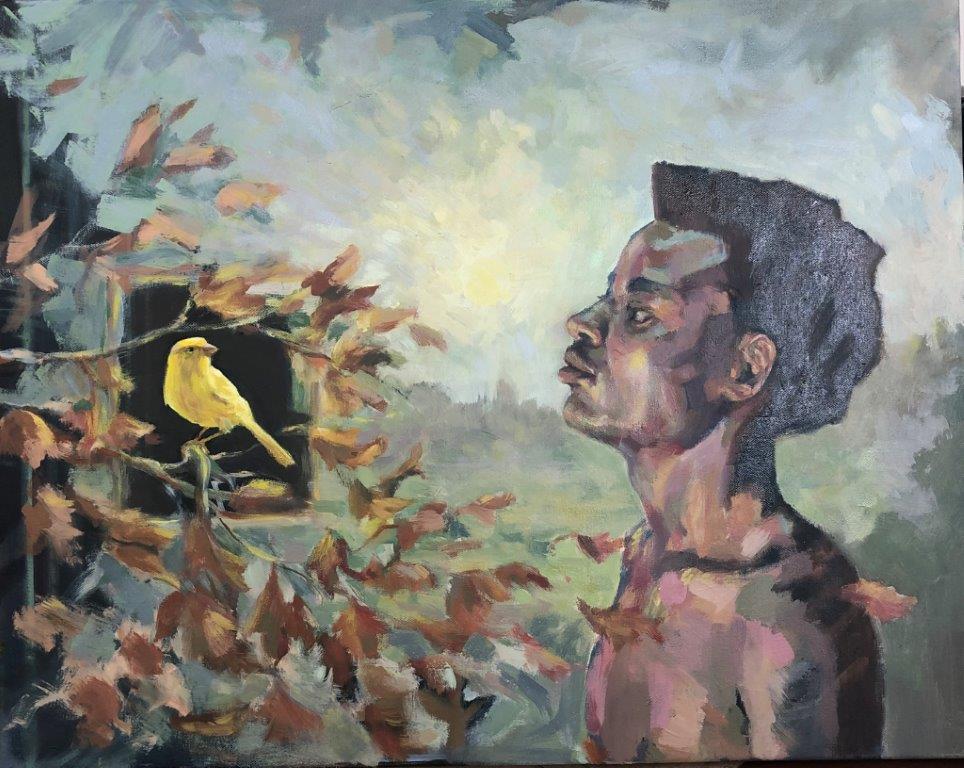 Alexia Smit
We live our lives surrounded by screens. My painting explores the looking relations and the narratives that we learn from these screens. I am particularly interested in the way in which fear circulates around women’s bodies and how the stories we tell are based on a broader visual culture in which violence is mundane and repeated. My training is in film theory and my painting is an extension of my scholarly interest in the image. I use paint as a research tool.
The starting point for this series of works was an interest in depicting voyeurism. This is one of the most foundational concepts in film studies, brought to prominence by Laura Mulvey’s seminal essay on ‘The Male Gaze’(1975). But I wanted to see what would happen when I explored it through the medium of painting. All of my works position the viewer as a spy or an unseen onlooker. The three larger works in this exhibition (The Watcher, The Good Neighbour and The Stranger) are scenes from my everyday life, and my own neighbourhood, while the series of smaller works (Suspense is Like a Woman Series) are based upon television images. This blurring of “real life” and “TV” is intentional as I’m interested in the way we narrate our experiences through popular culture.
Voyeurism is looking at a remove from the object. It is about both intimacy and distance. In the process of painting I enjoyed playing with the pull between the desire to look into a scene and barriers to vision which block and obscure the human figure. I like to think of this as a kind of striptease in which part of the pleasure in looking lies in what is masked rather than what is revealed.
While I am invested in the screen image, I am also keenly interested in the ways in the pleasures and practices specific to painting as a discipline. Painting introduces texture and a certain plasticity to the image. The illusion of spatial depth is necessary for creating a controlling surveilling look. But the brush marks and build-up of layers in a painting also produce surface texture which complicates depth. I am interested in how the tactile responses of our body to texture potentially work against the immersive drive of narrative images. 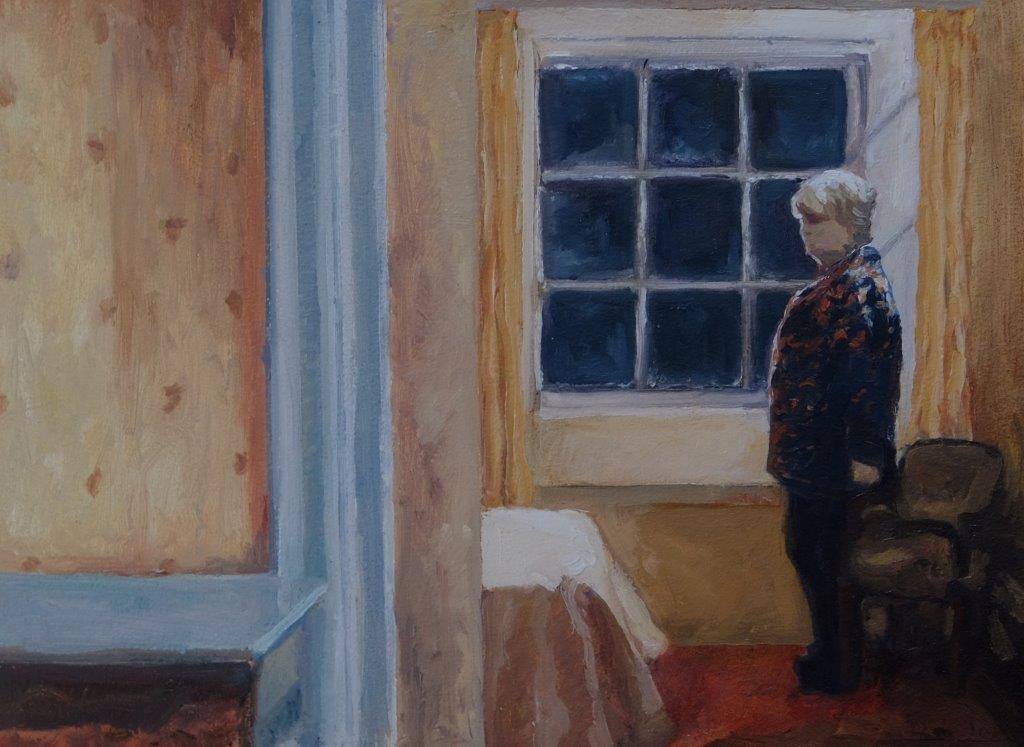 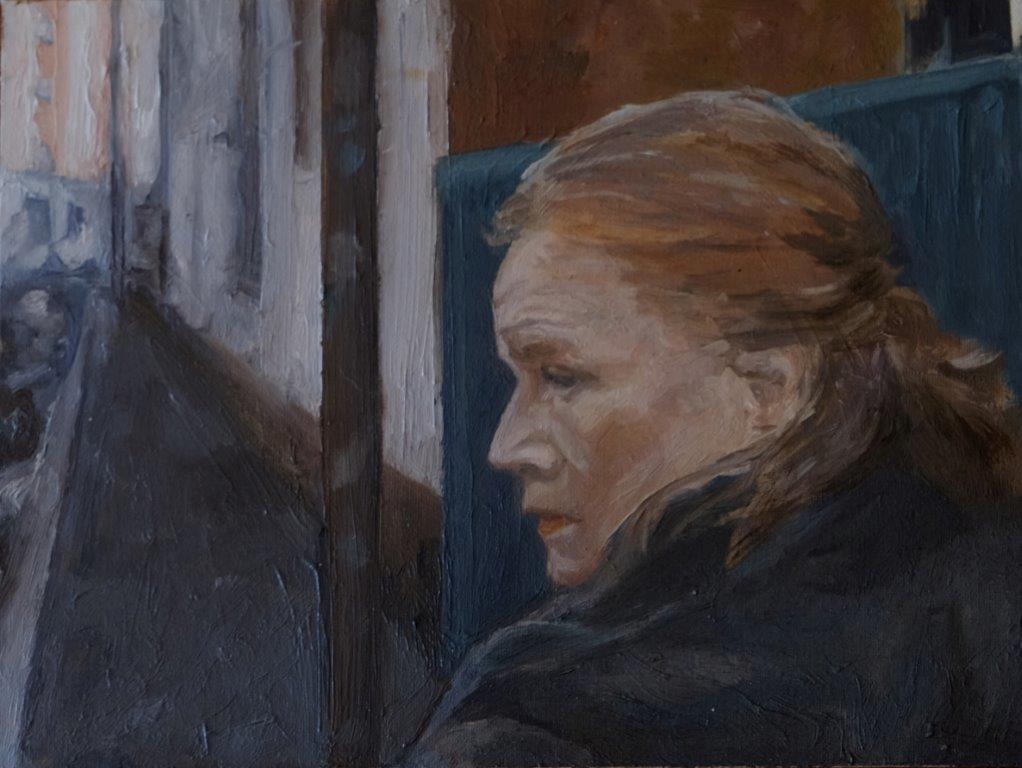 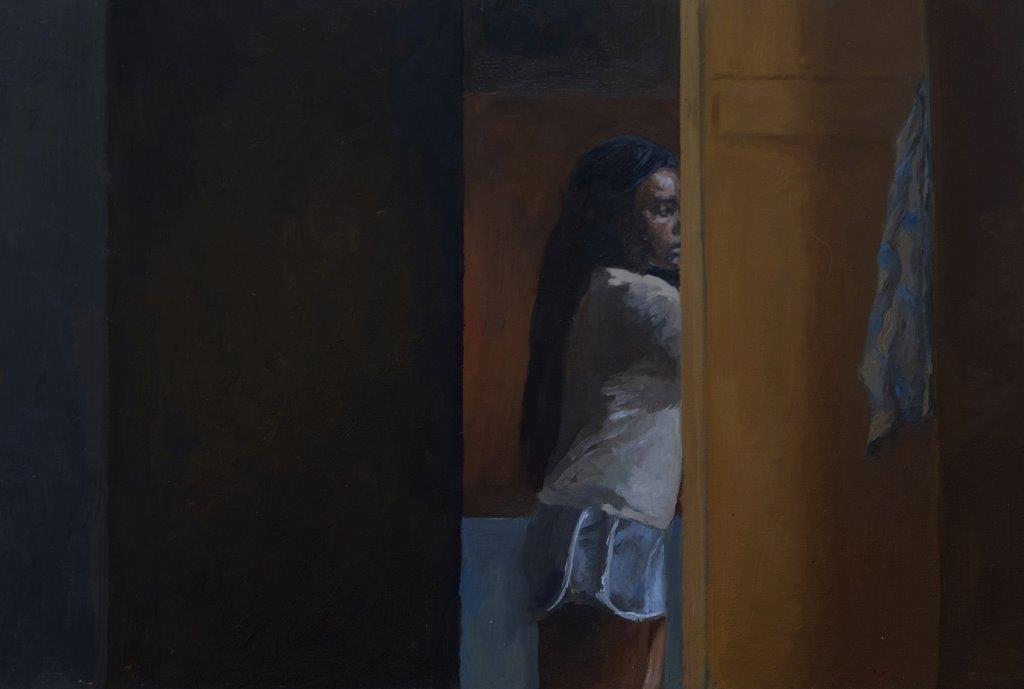 Riana Gear
Although I see myself as an optimist, I have witnessed, and sometimes been part of life’s disturbing mental and physical landscapes. I feel a vague urgency to save the world from injustice and threatening outcomes, and although I have no feasible plan for doing so, my journey as an artist leaves me with no choice but to use my work to argue for change.
In my current body of work I take a split approach between celebration and critique of our complex social dynamics.
As I search for meaning through concepts and images unfolding from my mind and fingertips, I find reality constantly shifting and new layers of truth exposed for deconstruction. My artworks are made through processes of painting, drawing, collage, printing and airbrush, combining abstraction and figuration. I feel drawn to a visual language between pop-realism and neo-expressionism.
Riana Gear is a Cape Town based artist who studied graphic design at CUT, Freestate and psychology at UNISA. She works from her studio in Montague Gardens. 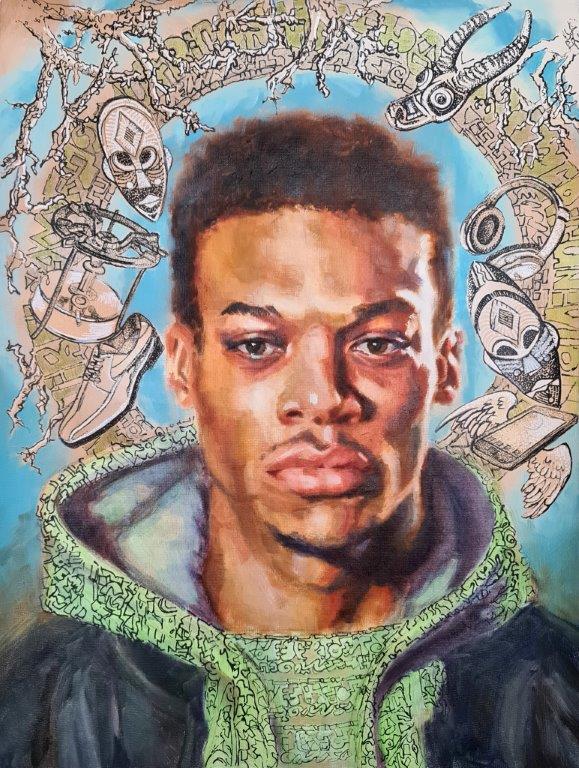 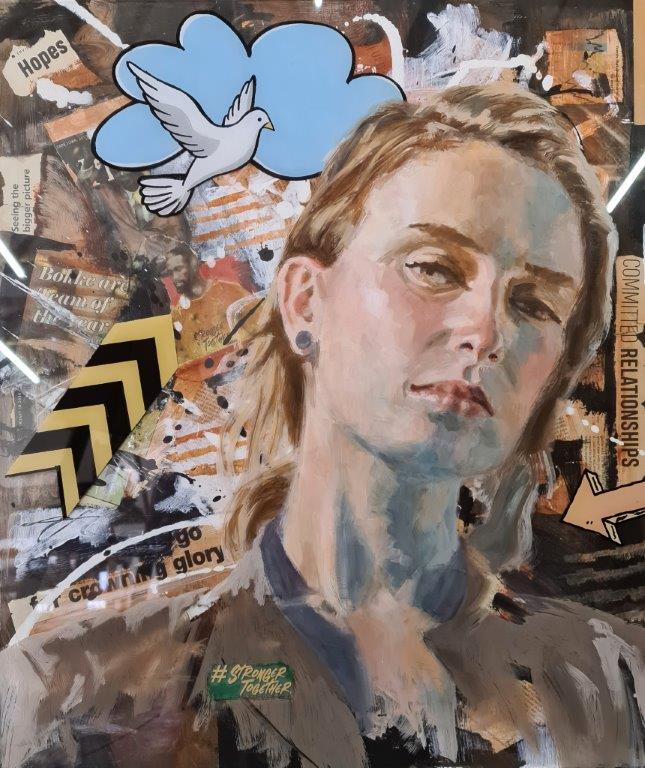 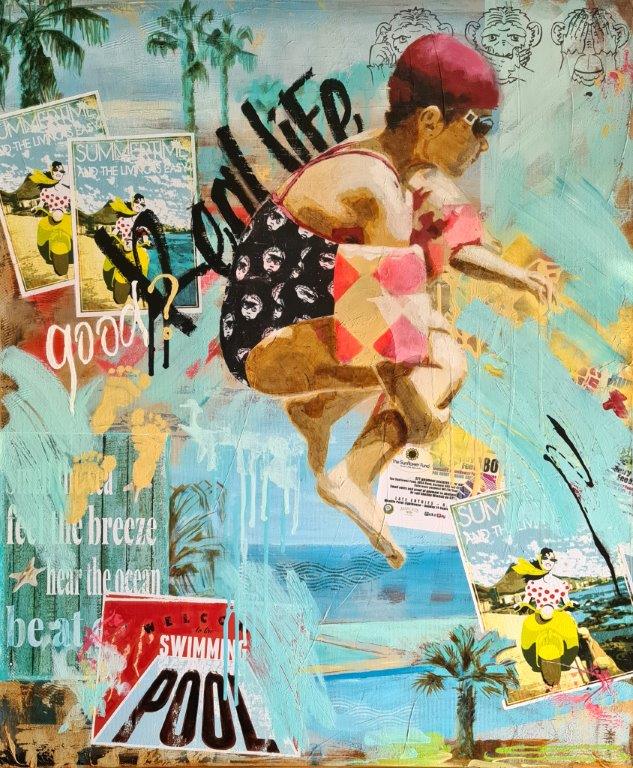