With only 3 weeks to go, there is still enough time to browse through the various categories and contact us for any condition reports or for more information as we build up to the live auction in our Johannesburg Saleroom on the 1st, 2nd, 3rd & 4th of August 2022. 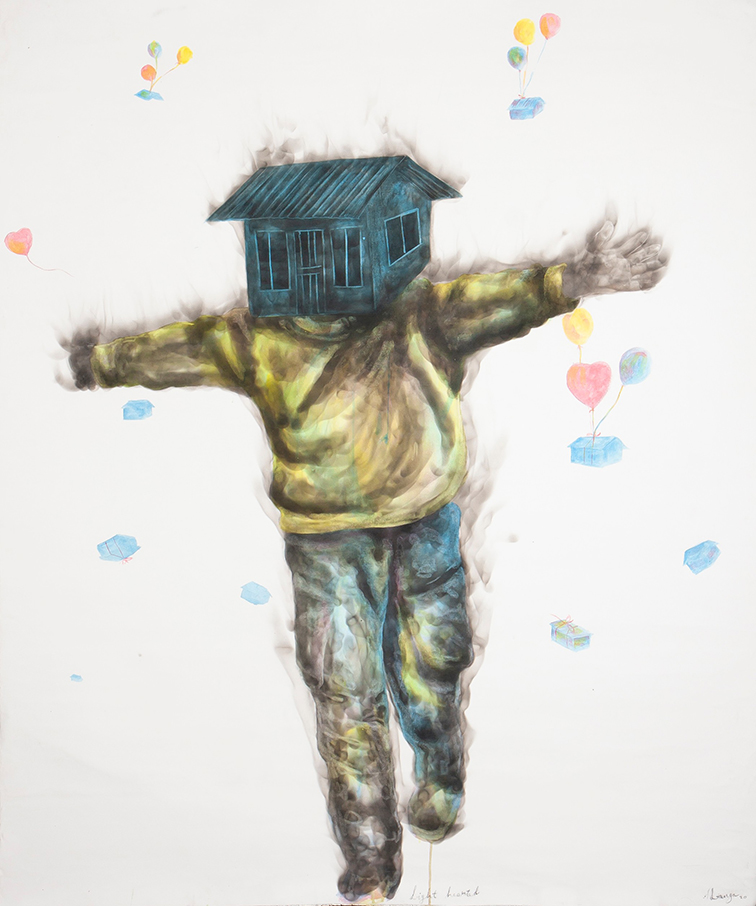 Azael Langa’s art perpetuates the idea that inspiration comes from home. His prolific use of fumage as a medium to explore the bittersweet socio-political landscape of South Africa ties into Langa’s thematical interrogation of the interconnectivity of communities. It is this conceptual combination that gives Langa’s work a melancholic yet jubilant impression. He uses overlooked individuals from his community to explore ideas of inequality, social injustices, and elitism whilst simultaneously evoking the notion that individuality is always connected to the formation of a community. His artist signature is always represented by the presence of a blue house which coincides with the sentimental notion of ‘home’ – as a place, we all return to in one way or another. 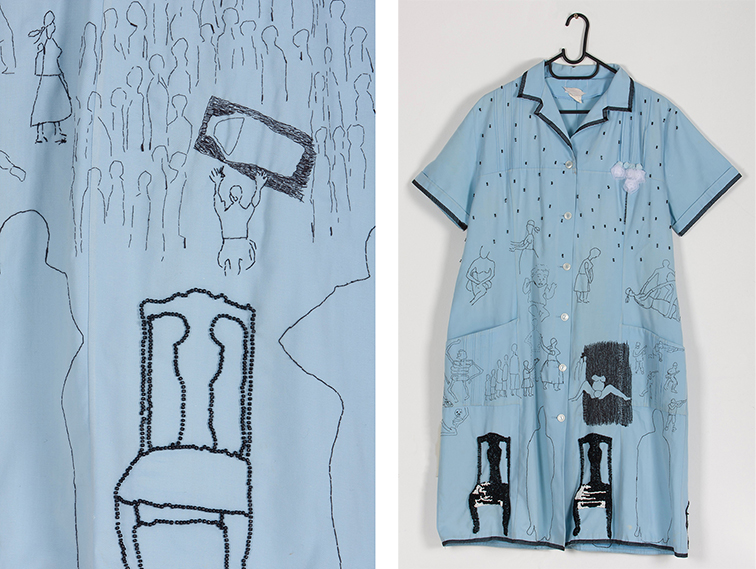 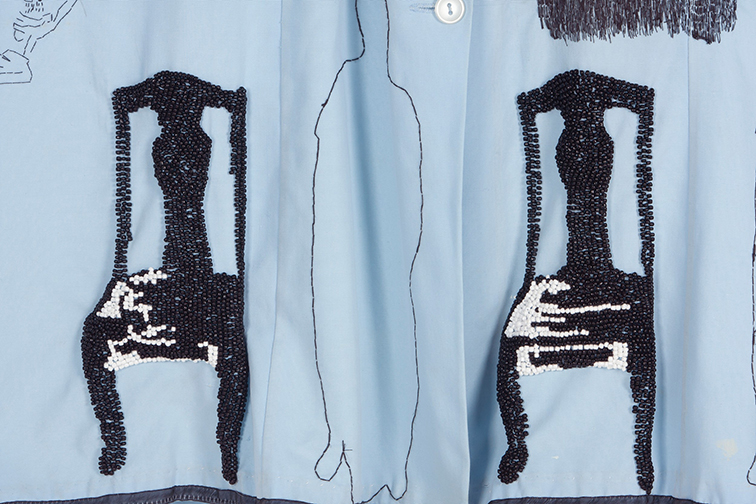 Senzeni Marasela’s Theodorah comes to Johannesburg series perpetuates the lasting ripple effect of the Apartheid era and the current prevailing systematic trauma inflicted on black women in South Africa. She aims to pay homage to the everyday black woman who lived a narrative of oppression, marginalization, injustice, and segregation during Apartheid.

The figure of “Theodorah” is a persona Marasela has based on her mother’s own experience of Apartheid. In this series of artwork Marasela, dressed as her mother, retraces her footsteps and journey through Johannesburg. She depicts this expedition in various photographic stills, but her work has spread to mediums such as embroidery and needlework.

Marasela’s mother moved from the Eastern Cape to Johannesburg after marriage and found the external reality of Apartheid, combined with her ongoing struggle with schizophrenia, unbearable. Although her mother was never a domestic worker, she uses this attire to challenge the notion of representation and the catalyst effect it has on the formation of identity.

In Maresla’s series she photographs herself in areas entrenched in the historical legacy of Apartheid -giving her character not only a sense of agency but a voice within a space where black woman were previously silenced. She acknowledges that certain areas in Johannesburg not only represent a legacy of misplacement and marginalisation but continues to reflect a turbulent political landscape. There is an understanding by Maresela that she cannot replicate her mother’s experience entirely because of the generational gap and political differences. Her work addresses the blatant continuum of racial socio-political displacement for black communities as an effect of Apartheid and simultaneously looks at the current yet ever-present threat of violence towards black woman in South Africa. This creates a parallel between the everyday South African black female’s lived experience and her mother’s.

Marasela uses “Theodorah” as a vehicle to navigate the indignation of black woman whilst simultaneously evoking a sense of agency to her mother’s own lived experience. The narrative which she creates through ‘Theodorah’ is not only a personally cathartic journey but one that emphasizes the collective traumatic discourse of black communities and the brutalization of black identities.

Nelson Makamo was born in Modimolle Limpopo, in 1982. The primarily Johannesburg-based artist is critically acclaimed for his charcoal and oil paintings that seek to rectify a multi-decade long visual trope of the impoverished ‘African child.’ Having obtained his formal training in fine art printmaking at Artist’s Proof Studio, Makamo has gone on to explore various mediums, but his mixed media and charcoal renderings of bespeckled children have gone on to become his artistic signature. He has exhibited internationally, garnered the attention of celebrity heavyweights such as Oprah Winfrey, Alicia Keyes, and Ava du Verney, as well as making the cover of Time magazine – Makamo has well and truly exploded onto the international art scene. From an early age, Makamo’s mother played an integral part in his journey. Having recognised his talent from an early age (with Makamo crafting and creating his own toys) she encouraged his passion but was however sceptical of the viability of art as a profession. Traditionally, within many Southern African cultures, more ‘established’ professions such as law or medicine are seen to ensure a more steadfast financial situation going into adulthood, with Makamo himself aiming to study chemical engineering. Thankfully, his deep connection to his own childhood, changed this trajectory.

THE CREATIVE PROCESS
Makamo’s creative process is not planned, as he states “… I always just go with what compels me at the time. The mediums that I use depend on what kind of impact the content of the work will be. It is always different” (Rise Art, 2018). He also states that, because of his consistent subject matter, he can explore many mediums, making use of oil, acrylic, various printmaking techniques, charcoal, and pastel. His focus also tends towards the emotive rather than the technical; because the subject matter is so personal, Makamo wants the viewer to feel rather than ‘unpack.’ This is evident when watching the artist at work, he makes no attempt to reign in his brushstroke, pouring in all the childlike vigour he would like the viewer to experience as well.

Makamo’s cousin, 11-year-old Mapule Maoto, is his most frequent subject matter – this adds to the personal appeal of his work, the subject at hand is very dear to him. As the artist states “Later on in life we sometimes forget there’s beauty in being a human being. But children are just discovering that” (Blignaut, 2019). As a child growing up, Makamo loved cartoons and comic books. Due to this, he uses a paired down visual language in his work to communicate – as he states “… I’m not a good speaker, so when I approach the work, I approach it with a mentality of hoping I will be able to have a voice that the next person is unable to” (Hona Africa, 2017). This creative process and visual language can be likened to some of his artistic influences, Dumile Feni, Vincent van Gogh, and Pablo Picasso.

CONCEPTUAL TURNING POINT
During a residency in Luxembourg, he overheard a family discussing the advantages of adopting an Asian child as opposed to an African child – inherent IQ level. This deeply offensive conversation solidified Makamo’s determination to change the visual and cultural narrative surrounding African children. This pivotal moment resulted in the addition of glasses to the children in his work – an accepted visual metaphor indicating intelligence (Hona Africa, 2017).

His intention to avoid the continued stain of abject poverty that revolves around the imaging of the black body is central to his work. The images of famine, disease, and pain that anoint the images of the ‘African child’, and that populate the minds of the art world are displaced, redressed, even healed by Makamo’s work. In an interview with Trevor Noah, Makamo explains that image of the child is universal and evokes similar feelings in all viewers because “…we were all children first” (2019). By using this subject matter, his works remind the viewer that we are more similar than we often realise. We all remember the hopes, dreams, and youthful innocence of childhood, and as Makamo explains “the essence of our former child selves remains with us all” (2018). The works are not sentimental but firstly, a re-rendering of the beleaguered image of the impoverished ‘African child’ and secondly, an honest shot of joy in a world that needs more kindness. A quote by Ashraf Jamal perfectly sums up Makamo’s intent and affect, “it is never the kindness of strangers one needs but the kindness of one’s fellow human beings. Infinity exists at the narrowest of points. One sees he world more clearly, kindly, when fear is purged when faith returns” (2021).

The magnitude of his works being in the collections of some of the world’s most influential people cannot be overstated. The gravitas added to his provenance and status within the art world both locally and internationally has grown significantly in the past few years due to these strategic acquisitions. Makamo’s meteoric rise to stardom has not come surprisingly though, he has been honing his craft for at least two decades, and this is evidenced in his many solo and group exhibitions throughout this period. The artist himself also makes a particularly important statement when he highlights the importance of having the maturity to deal with such a global reach. Moving forward, Makamo has gone on to engage with a variety of subject matters and alludes to the fact that he still has many more phases and journeys waiting in his artistic career. His exuberance for expression and connection ensure that we are still in store for many more surprises from this artist.