AT FEATURE: THE POWER OF REPRESENTATION Juxtaposing and re-interpreting art through the genres of Still Life, Sculpture, and Landscape

AT FEATURE: THE POWER OF REPRESENTATION Juxtaposing and re-interpreting art through the genres of Still Life, Sculpture, and Landscape 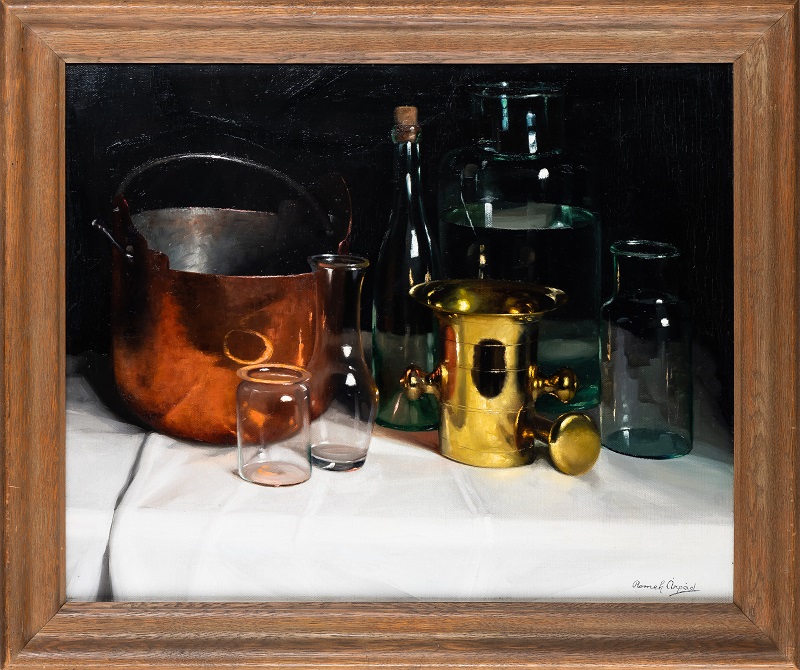 The Power of Representationis currently on display at Oliewenhuis Art Museum’s Permanent Collection. The exhibition was curated with the intention of showcasing the variety of artworks and different media held in Oliewenhuis’s Permanent Collection. Another purpose is to emphasise that museums are seen as mediators of new discourses and custodians and purveyors of visual and cultural memory.  The display rooms are divided into different categories:

The art of Still Life: From trompe-l’oeil painting to found miniature objects. As the subtitle suggests, the viewer will find a variety of traditional Still Life interpretations of Andrew Murray, Michael Pettit and Margaret Nel. For over a century Still Life as a genre has been practiced in South Africa and, as Michael Godby (2007) mentions, in the early twentieth century South African Still Life painters reflected or even adopted the European tradition. In this display room a focus is set on the Hungarian-born Still Life painter Romek Årpåd (1883 – 1960), who worked super realistically in oil. This Still Life represents ‘typical’ objects found in the Still Life painting: glass bottles and brass containers on a white cloth. All the items are displayed on a dark background. Årpåd’s approach could fittingly be compared to the French term, trompe-l’oeil, aiming to depict the objects so real as to deceive the eye of the viewer.

In comparison, the piece by contemporary artist Elrie Joubert, I Will Always Have Paris (2013) represents real collected miniature objects (less typical of the Still Life genre) collected on the streets of Paris. The intent of the artist here maybe not to deceive the eye of the viewer, but to add an extra layer of memory and history to each collected item, and add a component of archival memory by documenting each found object in meticulous miniature drawings. Joubert’s work leans more toward two-dimensional installation, in stark contrast to Årpåd’s approach of traditional painting on canvas, albeit that both artists attempt to bring forth an illusion of reality of a specific place or location and setting. 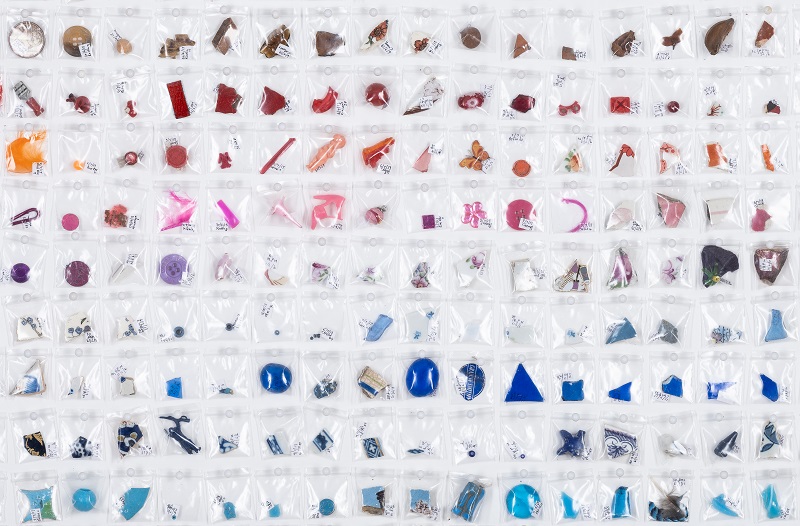 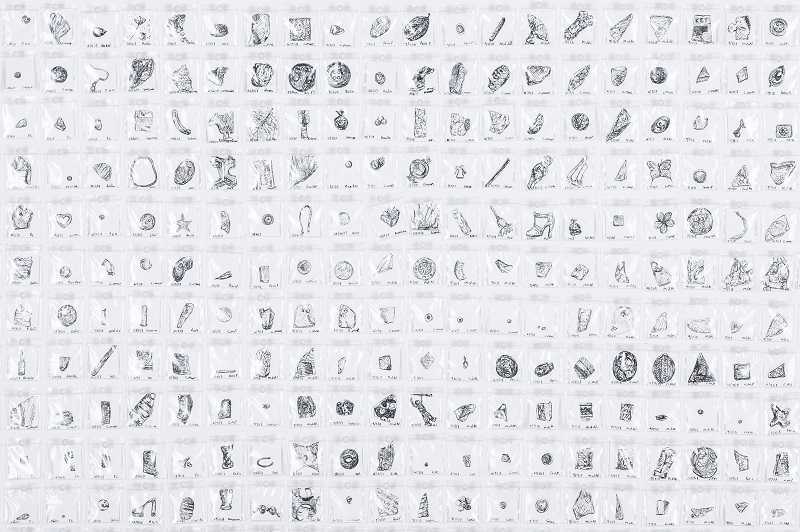 The sculptor’s playroom: Traditional sculpture, installation art, vanitas, and rusted objects. As the title of this display room suggests, artworks selected for this room are focussed on different approaches the sculptor can explore or even ‘play with’ in the studio: installation art by Christiaan Diedericks, a traditional wood carving of Lucas Sithole, and a stylised abstraction sculpture by Gert Swart that displays a combination of metal and wood. Lucas Sithole was a remarkable artist, best known for his wood carvings in indigenous wood. The subjects Sithole chose to carve fall unmistakably into three categories: animals, human figures, and heads. His work Just like that (1978) showcases a strong combination of his African ancestry and the historical era in which this work was made. The 1970s were a pivotal decade in the struggle for freedom in South Africa. Although Sithole’s work represents the traditional approach to sculpture, it represents so much more: hope, masterly skill, and a timeframe in which black artists had to work extremely hard to be acknowledged in the art world. 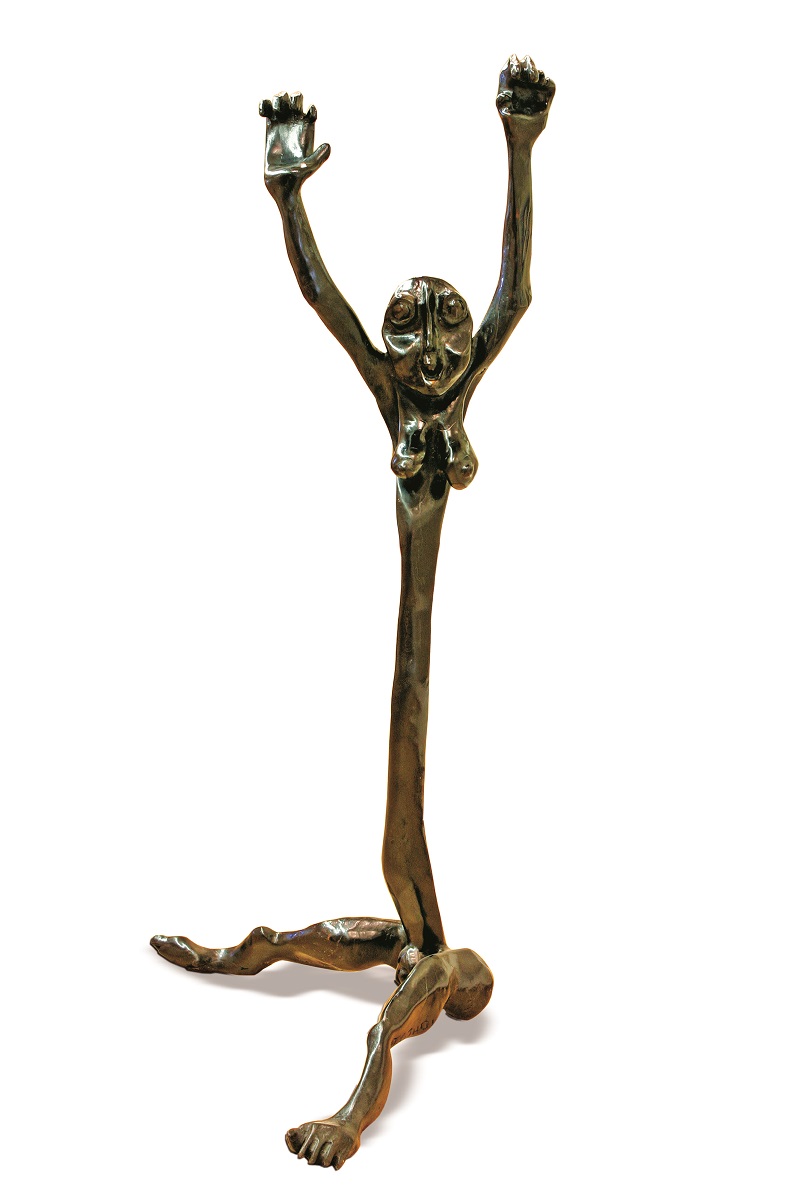 We are privileged to showcase these artists’ legacy in our museum. Jeanette Unite and Toni Pretorius’s work in this display area are contrasted with Sithole’s work. Sithole’s is a three-dimensional sculpture, standing on the floor, whilst those of the two younger contemporary artists are two-dimensional installations on the wall, conveying messages about the rusted objects, memento mori, and the viewer’s awareness of time, decay, and mortality.

Rust as a medium, seen in the installation of Jan van der Merwe’s Vertoonkas (2003) and Jeanette Unite’s Complicit Geographies: Martyrs of Marikana 2015 (2015) represents decay and impermanence. Jeanette Unite produced this artwork with medium pigments she makes from the mineral oxides she collects from mines, to which she travels as a part of her personal and artistic journey. These mineral oxides are painted on the panels with the intention of disrupting their surfaces. This work serves as a memorial to the men who brutally died in the Marikana conflict in 2012. Unite commemorates this event by incorporating the names of the victims on the artwork in a monumental way. 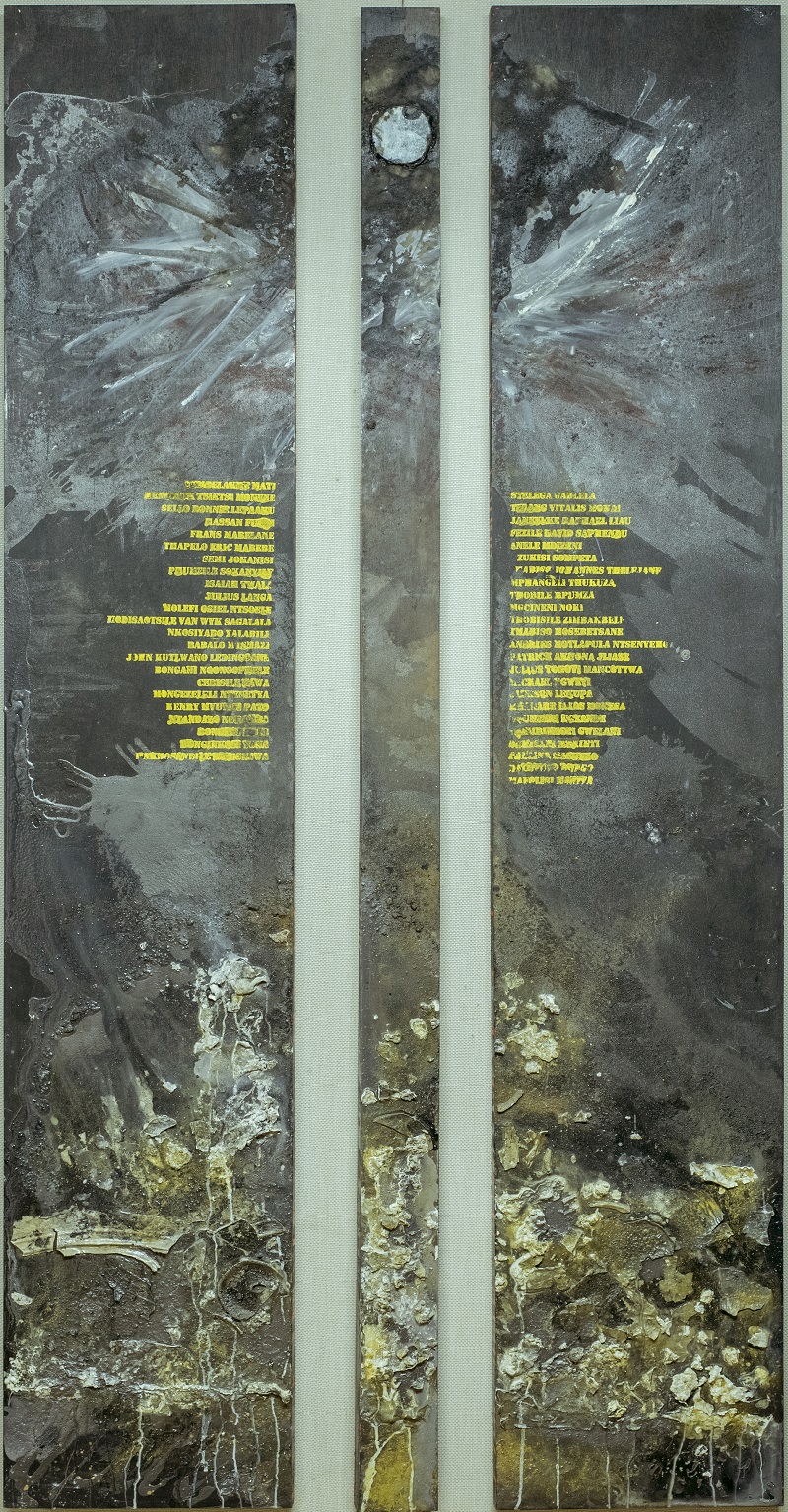 Landscape: Marks on the land, landmarks, and narratives about the South African landscape is a display room with a variety of different approaches to landscape art. Included here are works from the 1800s of Thomas Baines, to contemporary artists such as Paul Emmanuel and Brent Meistre. The work of Thomas Baines, Bloemfontein vanaf Naval Hill 1851 showcases in the far distance the Tweetoringkerk (Twin Tower Church). In contrast, a work by Johan Voets (2010), Sunday afternoon on Hill street, was placed next to Thomas Baines with a recent depiction of the Tweetoringkerk. These works placed in contrast echo geographic conversations of the distant past and more recent past of Bloemfontein. Both Naval Hill and the Tweetoringkerk are today still important landmarks in Bloemfontein.

Paul Emmanuel’s Lesion refers to the trench wars of World War I. Emmanuel inscribed the landscape with the names of soldiers who died in that war. Since World War I was a European war, it seems far removed from South Africa; few South Africans can relate to it, and often don’t know what our country’s contribution to it was or how many South African soldiers died in WWI. By adding text (names and inscriptions acknowledging unknown soldiers), Emmanuel reminds us of the many men who fought and died for higher authorities. He urges us to research this part of our history, because South Africa was not completely exempt from World War I, despite its geographical distance from the parties directly involved. This war literally left marks on the land, as Emmanuel stated, that survive even until today; as farmers are ploughing the land, and remnants of humans resurface on these war sites. The marks left on the land in 1914 are an enduring reminder of this tragic and brutal war and the lost men who fought in it.

The Power of Representation is an exhibition with dual functions – to display pleasurable works for the viewer, but also to convey necessary discourses that are of crucial value within the museum space for audience and content development. This exhibition is curated to emphasise the power that both museum displays and artworks hold. 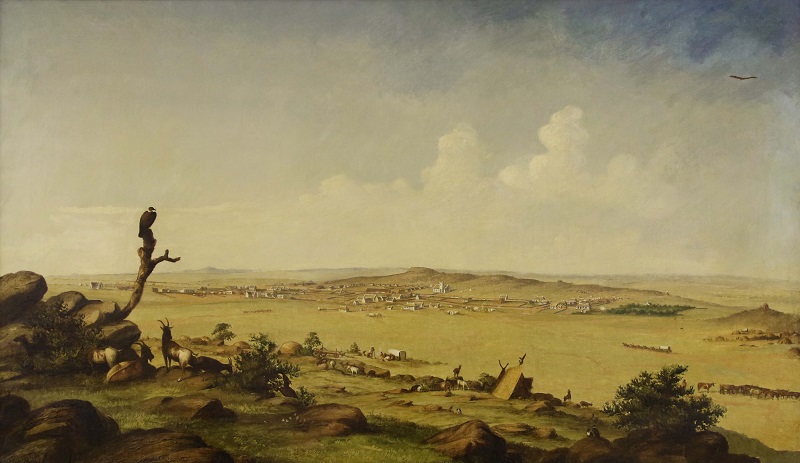 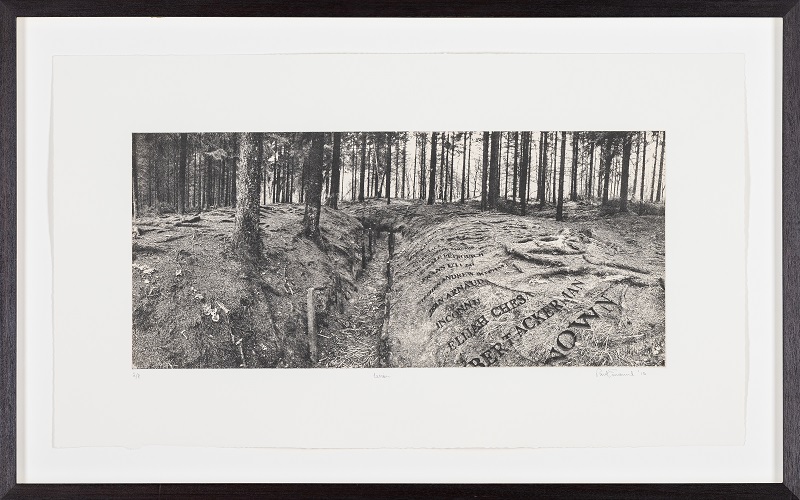 Oliewenhuis Art Museum is located at 16 Harry Smith Street, Bloemfontein. It is open to the public from Monday to Friday between 08:00 and 17:00, and on Saturdays, Sundays, and public holidays between 09:00 and 16:00. For more information on Oliewenhuis Art Museum please contact the Museum at 051 011 0525 (ext 200) or oliewen@nasmus.co.za. Stay up to date by following Oliewenhuis Art Museum on Facebook, Instagram and Twitter for all upcoming exhibitions and events. 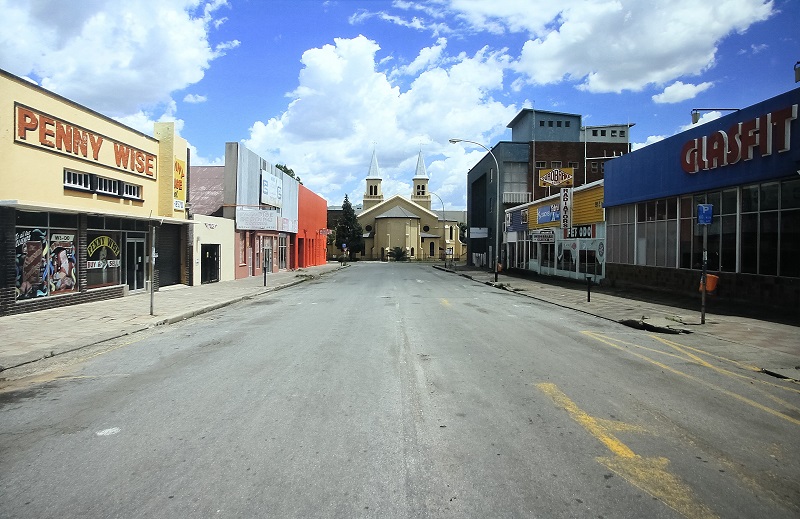