Travel was central to the life and work of Walter Battiss, JH Pierneef, Alexis Preller and Irma Stern, four important twentieth-century moderns whose work forms the core of Strauss & Co’s superb art offering to be auctioned online on Monday, 11 May. The change in format of Strauss & Co’s autumn sale of important South African moderns was necessitated by the current Covid-19 outbreak.

The virtual sale, a partnership with Invaluable.com, the world’s leading international platform for buying art, antiques and collectibles online, will replicate a physical saleroom scenario, with Strauss & Co’s auctioneers conducting the sale live, in isolation.

“Invaluable.com hosts hundreds of auctions and provides a fair, safe, public and accessible auction platform all year round,” says Strauss & Co chairperson Frank Kilbourn. “This partnership will expand our reach internationally, for the benefit of buyers and sellers alike.”

Highlights from this exciting sale include a 1939 portrait of Zanzibari religious elder painted at the start of Irma Stern’s golden period, as well as numerous depictions of 1920s Stellenbosch by JH Pierneef. The sale also includes a striking 1971 oil and gesso on canvas influenced by Alexis Preller’s travels to Egypt, and a superb selection of works recording Walter Battiss’s island hopping in the 1960s and 70s.

“In these difficult times, when mobility is restricted, I believe art lovers will delight in our extraordinary selection of works describing the pleasures and insights of travel,” says Bina Genovese, Strauss & Co’s joint managing director. “While we do not necessarily consign works with a theme in mind, many key works to be auctioned in May affirm the itinerant habits of South Africa’s canonical painters, especially Battiss, Pierneef, Preller and Stern. Our May catalogue also includes outstanding pieces by Peter Clarke, Maggie Laubser, George Pemba, Robert Hodgins and Stanley Pinker. I am delighted by the cross section of artists represented in this sale, including contemporary painters like Georgina Gratrix and Jake Aikman.”

Travel is central to Stern’s biography. Following a period of journeying across Southern Africa in the 1920s, Stern began to travel further afield throughout the 1930s and 40s. Painted in 1931, Street Scene, Madeira (estimate R400 000 – 600 000) was produced during a three-month visit to the Portuguese archipelago off the northwest coast of Africa. In the Harem (estimate R400 000 – 600 000) is a lively colour study from Stern’s second visit to Zanzibar in 1945 and portrays two seated women.

Stern’s coveted output extends to energetic still lifes painted at her home and studio, The Firs, in Cape Town. Strauss & Co is delighted to be offering Still Life with Lilies (R13 – 15 million). Painted in 1947, this vibrant arrangement of orange tiger lilies is a brilliant elaboration of her expressive style of painting. Collector interest in Stern’s flower studies is high: in May 2019 Strauss & Co achieved a record price for Still Life with Fruit and Dahlias (1946), which sold for R16.2 million. 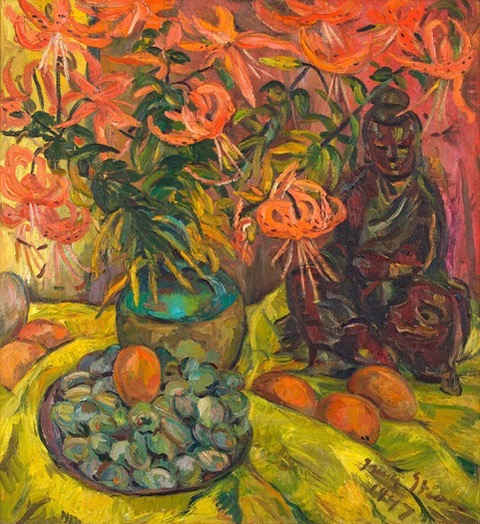 The still life was an important site of experimentation for Stern. Painted in 1952, during her imperial period representing South Africa at each of the 1950s Venice Biennales, Nativ Idol [sic] (estimate R1.8 – 2.4 million) includes a Luba caryatid stool from the southeast Congo that features in a number of her paintings. The stool now forms part of the Irma Stern Trust collection at the Irma Stern Museum. The upcoming sale includes six drawings consigned by The Irma Stern Trust.

Two casein works also locate Pierneef in 1920s Stellenbosch. Painted in 1923, Die Wynkelder by Du Toits Plaas, Krommerivier, Stellenbosch (estimate R300 000 – 500 000) depicts a wine cellar that Pierneef would return to paint again in 1925. Jonkershoek: Stellenbosch (estimate R600 000 – 800 000) was produced in 1924 and is one of Pierneef’s earliest renderings of this majestic valley. A master of notation in the field, this casein is rendered in a pointillist style using bright pinks and oranges.

Iconicity is central to Pierneef’s popularity among collectors. Bushveld Game Reserve (estimate R2 – 3 million) finds Pierneef in South Africa’s northern grasslands. Produced in 1950 and rendered in a lively palette of green, ochre, yellow, orange and red against a blue and grey sky, this bravura work depicts a savannah woodland crowned with a billowing cumulonimbus cloud formation. 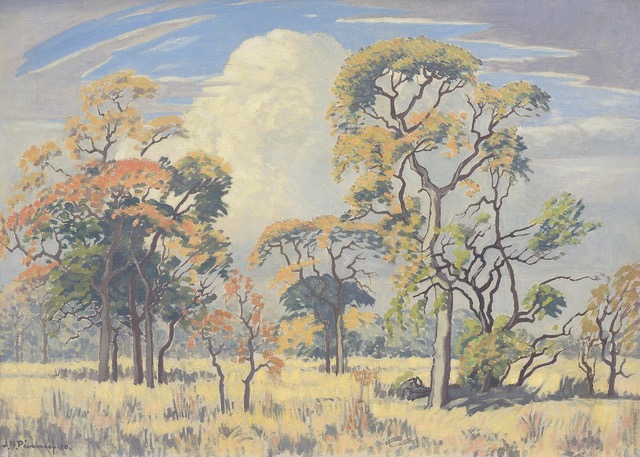 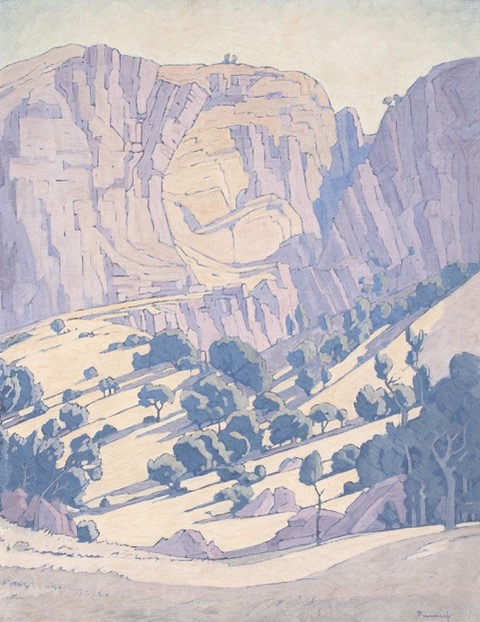 Alexis Preller, like Stern and Pierneef, was an inveterate traveller. Completed in 1971, Space Angel (estimate R5 – 7 million), an image of a disembodied head in aquiline profile, includes elements drawn from Preller’s study of ancient Egyptian art during a visit to the country in 1953. The head integrates a large Egyptian-like eye and pharaonic beard.

Much like Stern, Preller’s earlier work depicted the indigenous cultures of Southern Africa. Dated 1951, The Kraal (estimate R800 000 – 1 200 000) is a mythical study of an Ndebele kraal that incorporates references to photos by Constance Stuart Larrabee and motifs from Hieronymus Bosch. 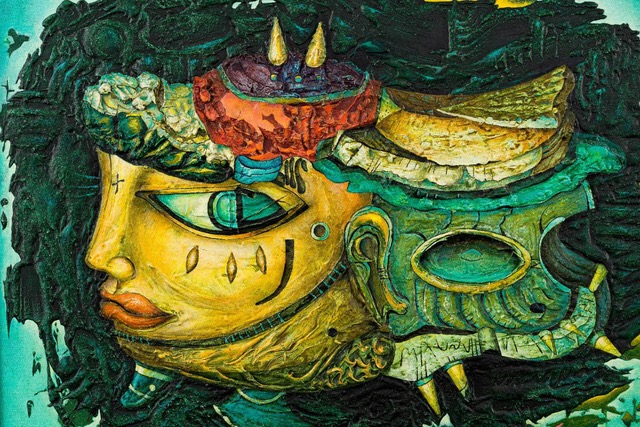 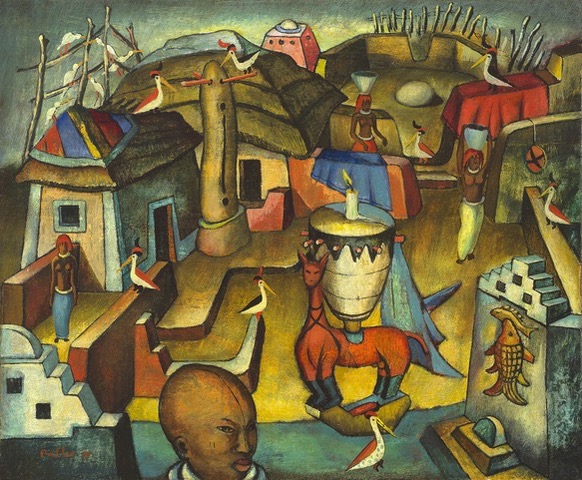 Produced during the height of his acclaim, in 1965, The Ship (estimate R1.8 – 2 million) is an abstracted representation of an ancient Grecian galley that features impulsive black calligraphic flourishes, blots and scribbles. Early Greek bronzes and marble Kouros figures informed Preller’s mature art, although it was only in 1968 that he travelled to Greece and Turkey for the first time. 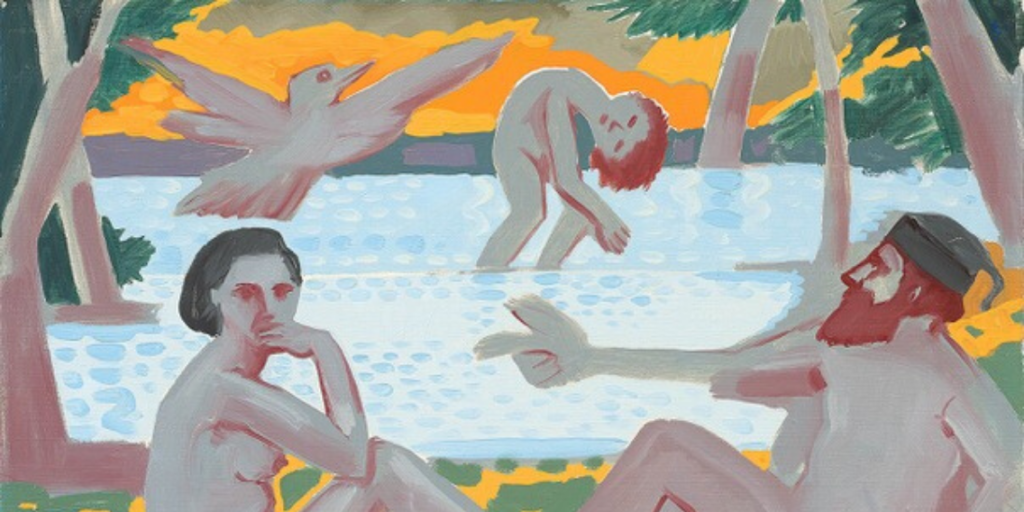 Lot 597 | Walter Battiss SOUTH AFRICAN 1906-1982, Le Déjeuner sur l’Herbe, signed, inscribed with the title in part on a Michael Stevenson Gallery label on the reverse, oil on canvas, 41 by 50.5cm excluding frame; 56 by 66 by 4cm including frame

Scenes of human congress and bonhomie on islands and near water typify Battiss’s prolific output. A highlight of the Battiss offerings to go under the hammer in May is his composition Le Déjeuner sur l’Herbe (estimate R500 000 – 700 000). The work is based on Édouard Manet’s well-known picnic scene of the same name and has an impeccable provenance, having once been owned by art dealer Linda Givon, a close confidante of Battiss.

This joyous work forms part of a diverse consignment of works by Battiss, Cecil Skotnes and Maud Sumner consigned by the estate of collectors Graham and Rhona Beck. Also from the Beck Collection, Musician and Bathers (estimate R250 000 – 350 000) typifies Battiss’s interest in recording figures at leisure. Other works in this style include Gathering (estimate R450 000 – 550 000), a glowing-red horizontal canvas filled with silhouetted figures.

Other notable artists represented in the sale and whose creative lives were informed by travel include Peter Clarke and Stanley Pinker. 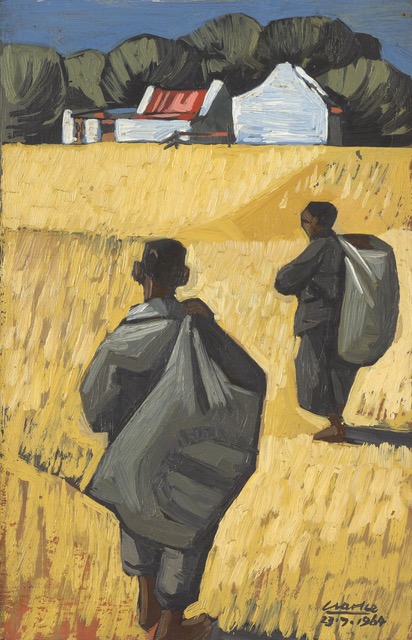 A quiet force at auction, Clarke’s Harvesters, Teslaarsdal (estimate R250 000 – 350 000) depicts two labourers in the southern Cape landscape that had a formative impact on his career. Urban labour forms the subject of The Fruit Vendor (estimate R600 000 – 800 000), an assured 1959 portrayal in oil – not Clarke’s usual gouache – of a young man in khaki uniform. Interest in this area of his practice is high. Two ink and watercolour drawings from 1953 portraying a flower seller and vegetable deliverer performed exceptionally well in Strauss & Co’s March online sale.

In the 1950s, during a decade-long hiatus from South Africa, Pinker sojourned in the area of Nice to paint. Spanish Landscape (estimate R400 000 – 600 000) is typical of the artist’s early modernist style, before he achieved the mature fluency evidenced in the powerful diptych His and Hers or Decline and Fall (estimate R2 – 3 million). The work portrays an aging couple in outmoded fashions in one panel surveying two exercise bicycles marked “his” and “hers” in the opposite panel. 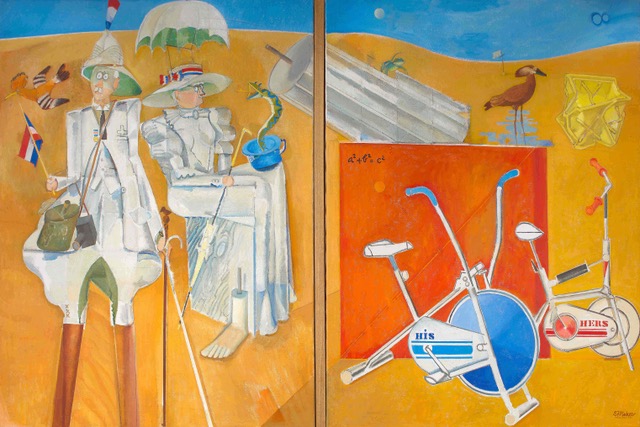 All the lots mentioned in this communiqué will go under the hammer on Sunday 10 and Monday 11 May. The contents of the forthcoming two-day virtual auction is already live on the Strauss & Co website, www.straussart.co.za, or it can be accessed by visiting invaluable.com. Prospective buyers can register online and it is possible to place bids now.

Strauss & Co will continue hosting its well-received programme of daily Zoom.us virtual talkabouts, which feature company specialists and guest speakers in conversation about highlights of the May sale. Visit www.straussart.co.za for the schedule and the log-in link.