AT FEATURE: Wildlife 2021 at The Cape Gallery

AT FEATURE: Wildlife 2021 at The Cape Gallery

Keenly anticipated, the Wildlife 2021 exhibition at The Cape Gallery will be open online, and to view in the gallery on 02/09/2021 and will be on show until 23rd October. We value the advocacy of wildlife artists, they enable a deeper understanding of, and affinity for, Southern African Wildlife in their habitat. No artist can paint what they do not know. Through their paintings, sculptures and graphic works we can vicariously experience a closeness to the animals which would not be possible in the wild and gain a deeper understanding of amazing diversity of the creatures we share our environment with.

This year, one theme has been unavoidable; the urgency to address, and work towards halting, the ravages of climate change. The United Nations Intergovernmental Panel on Climate Change have released sobering statistics assessing the damages caused by global warming, which is causing catastrophic fires and floods and severely impacting human and animal populations.

Cobus van der Walt’s painting ‘Road to Damascus’ signifies that the time has come for humanity to have their road to Damascus moment. What is a road to Damascus moment? It is a moment in a person’s life in which they experience sudden clarity and experience a great change in their ideas and beliefs. The United Nations report states; “It is unequivocal that human influence has warmed the atmosphere, ocean and land.” Such a strong statement coming from the most extensive climate change investigation in history cannot be ignored. 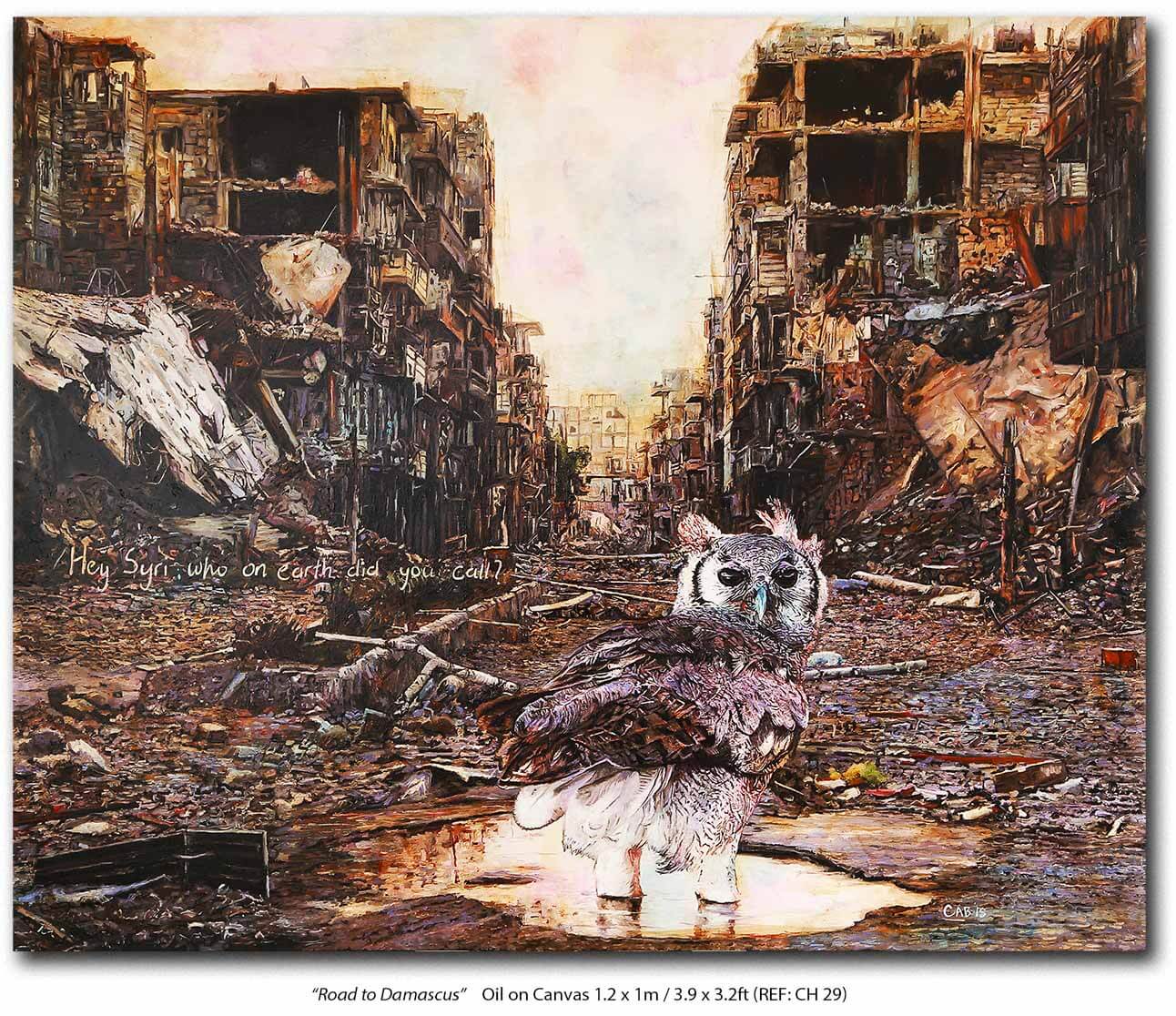 Peter Gray, a renowned International Wildlife artist makes the point that “The selfish pursuit of wealth or position has had and continues to have negative impact on our natural environment. However, at the same time, many work tirelessly and unselfishly to preserve it. Like it or not, we are all in the game – playing it out to a lesser or greater degree – sometimes as analysts or conservationists, at other times as spectators, but we all participate. All of us have a responsibility and are accountable.” 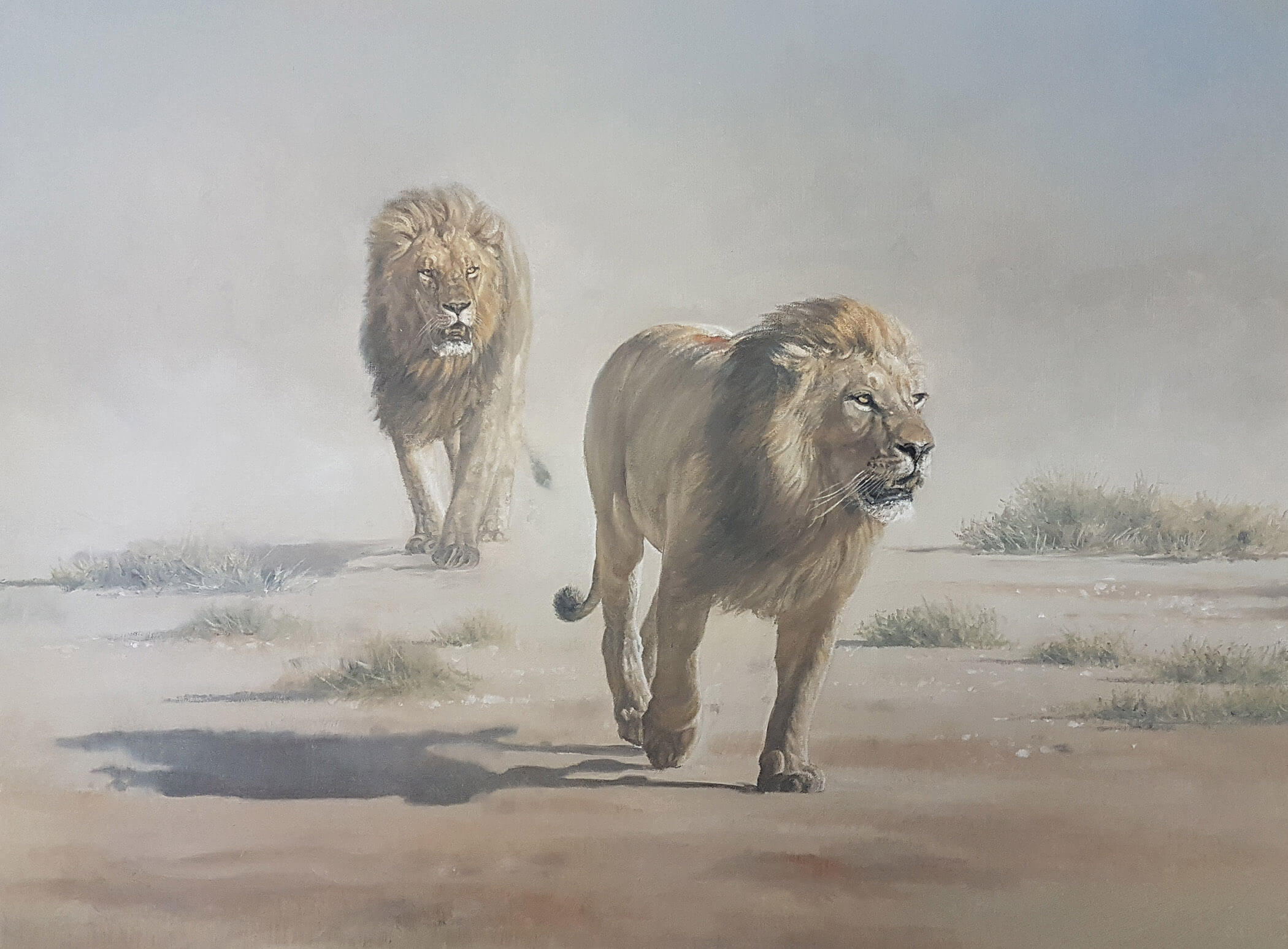 Robert Koch is the son of the renowned wildlife artist, Martin Koch, nephew of Francois and Johan Koch. All the brothers are highly exhibited international artists, with Robert following rapidly in their footsteps with his magnificent portrayal of a cheetah family. 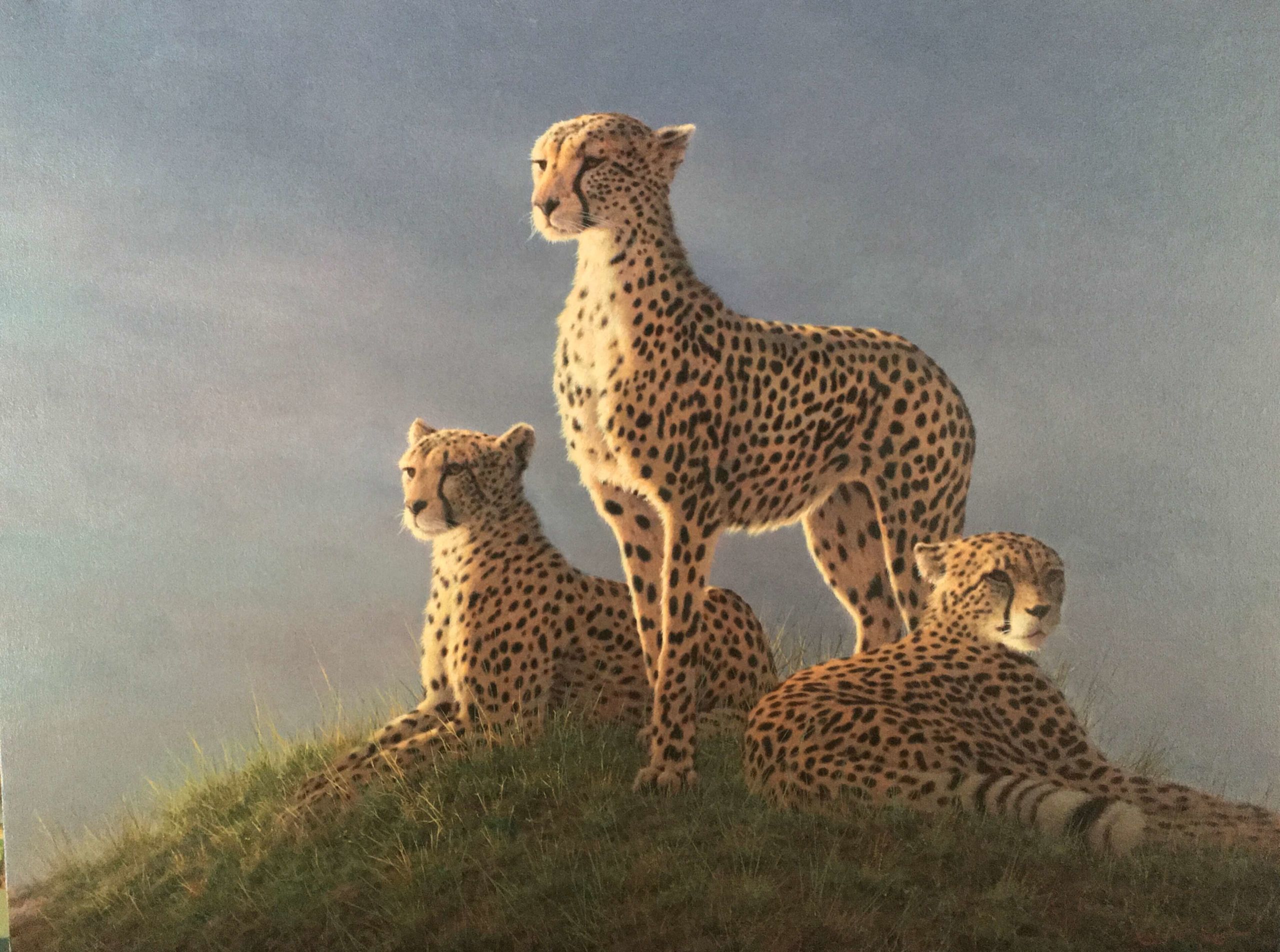 Barry Jackson’s and Bridget Randalls limited edition depictions of wildlife in bronze are sought after by collectors who identify with conservation. Barry is well known too for his paintings in oil and acrylic.

David Thorpe’s mastery of his subject and medium, oil on canvas is evident in his ‘Two owls, a wren and a sparrow’. He has engaged so intimately with his subjects he has brought them to rest in his studio, perched beside his brush and pencil. 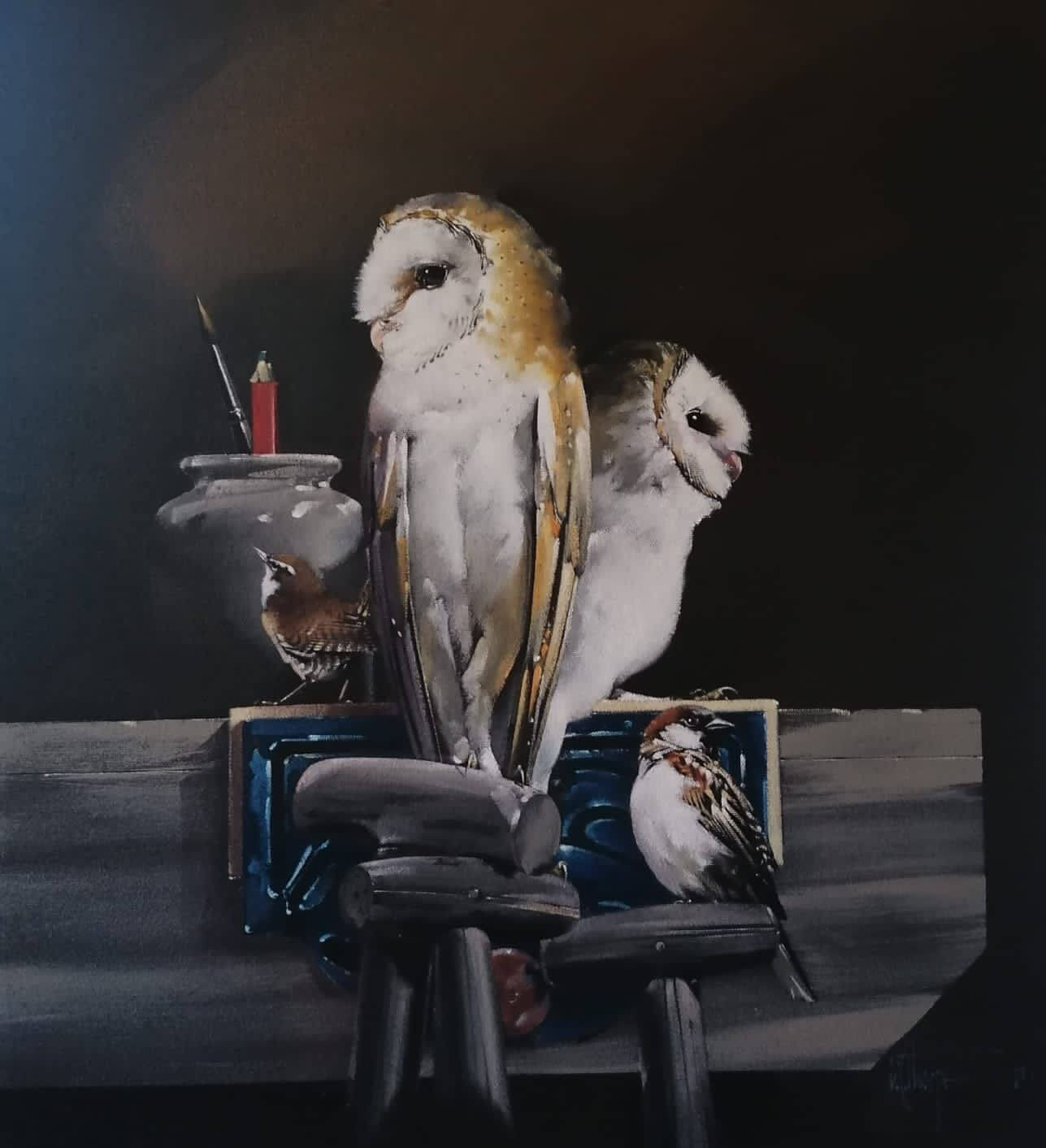 Noel Ashton has spent over 25 years studying whales and dolphins, specialising as a cetacean scientific illustrator and sculptor. Through his programme Oceans of Africa, which he runs with his wife Belinda, he combines his science, paintings, sculpture, and environmental philosophy within inspirational conservation initiatives. These have included the well-known IFAW Whale Walk in Hermanus; the Benguela Dolphin Project on the west coast, and the Sacred Ocean initiative which is an anti-whaling campaign based around his iconic 3,5m sculpture which is permanently positioned in the foyer of the Two Oceans Aquarium. 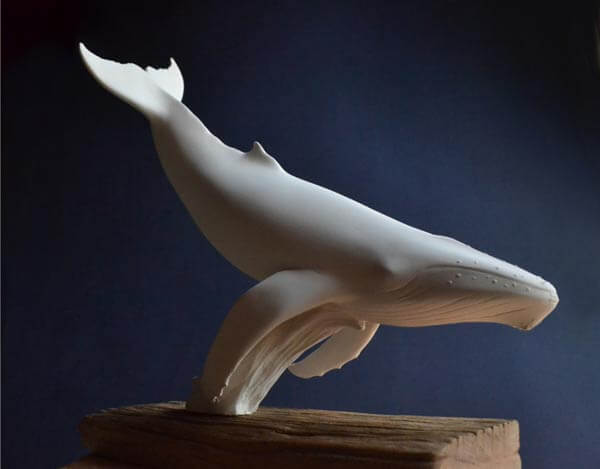 Lin Barrie lends her voice, and her palate knife to conveying her direct observations of the endangered Wild Dogs in the Chilo Gorge conservancy in the southeast of Zimbabwe. 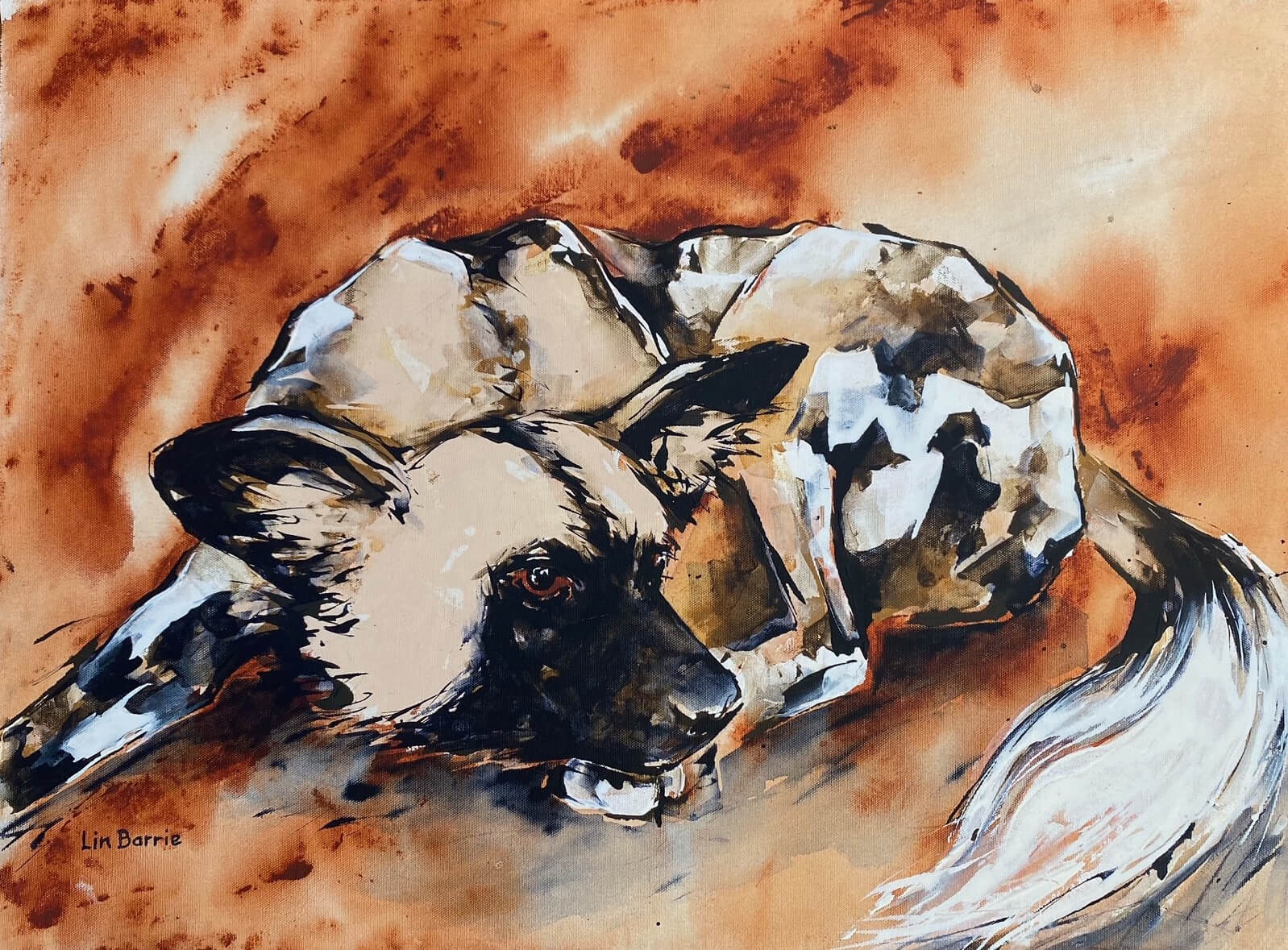 Another artist who wields a palate knife loaded with paint as if it is the essence of life itself is Makiwa Mutomba. His work is instantly recognisable by their array of bright colours that come together to create iridescent animals that look like they are ready to walk right off the canvas to brighten our world with their presence. 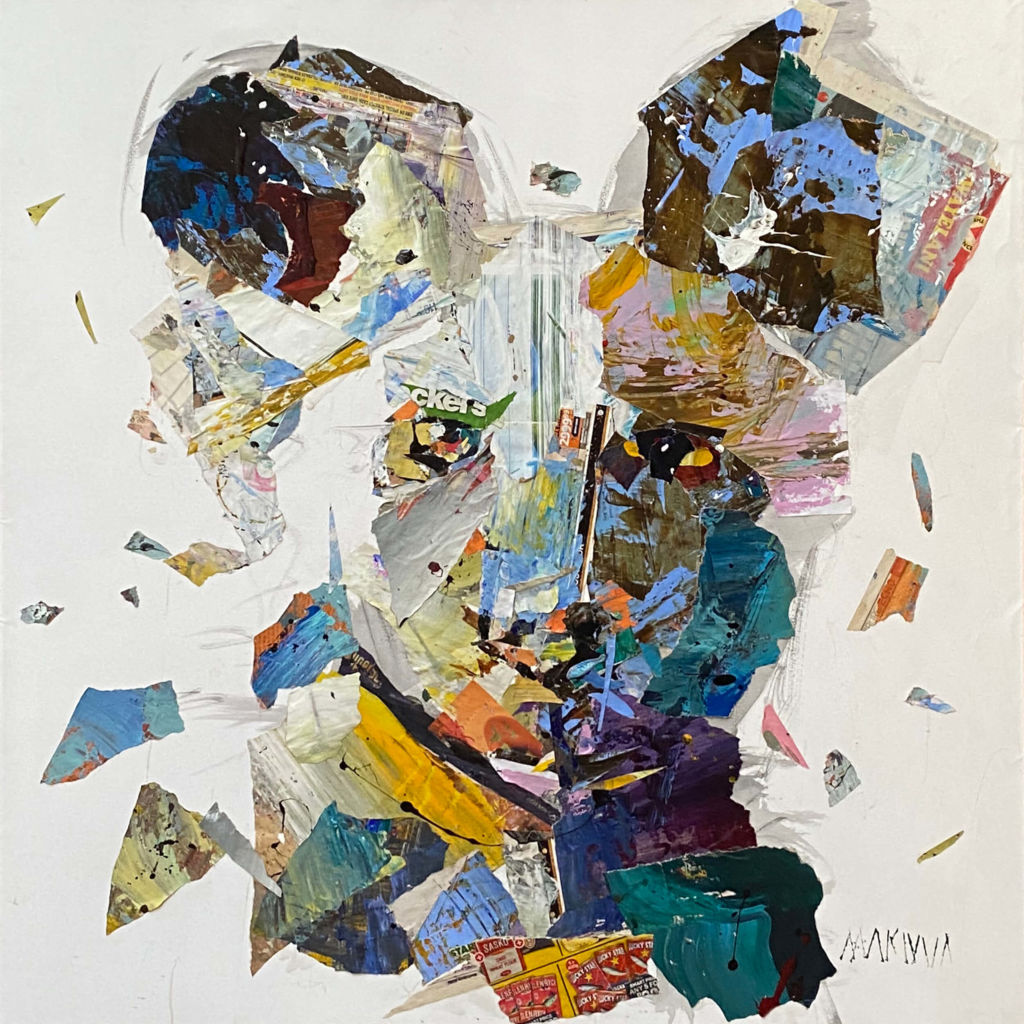 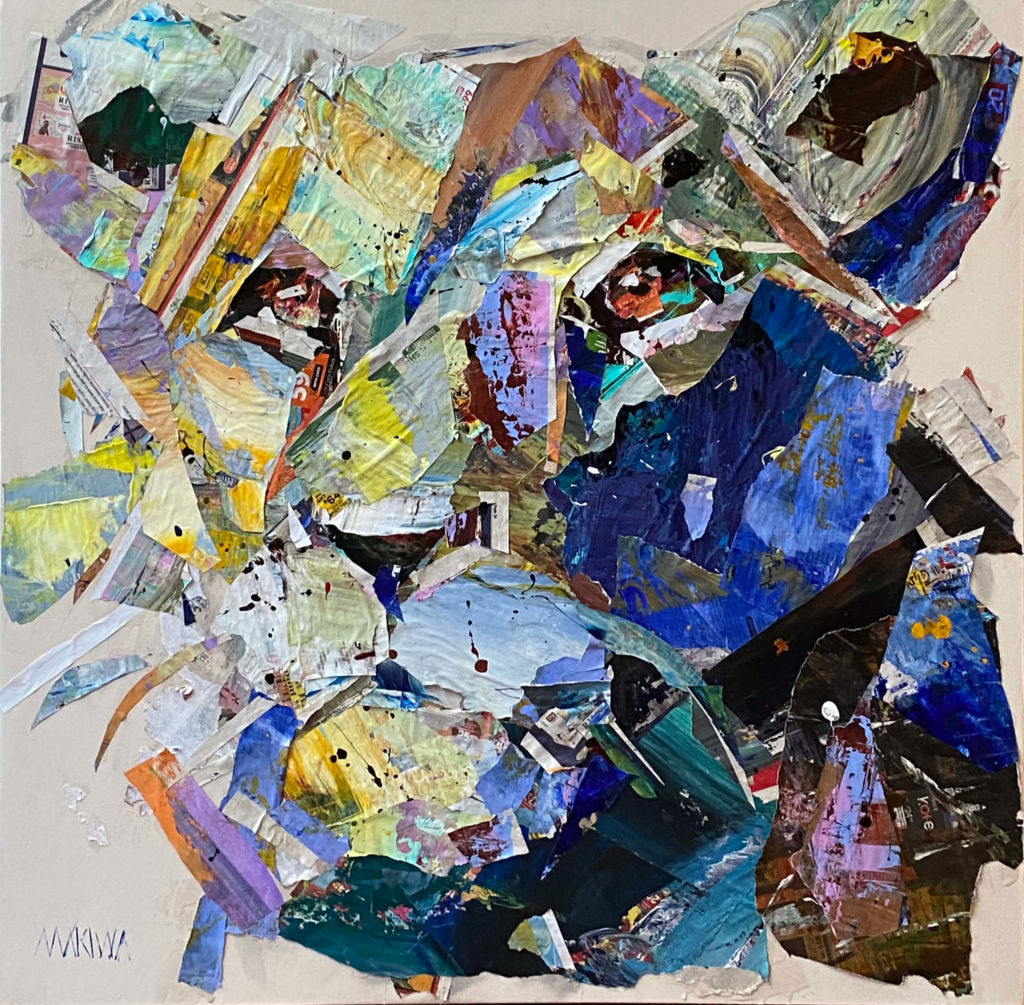 In a time in which our worlds have become very small we need to remember that there is a vast and vibrant environment all around us, it is the only one we have, and we have to be the ones to work towards saving it. We hope that in bringing that world to our audience this exhibitor might inspire someone to have their own road to Damascus moment.