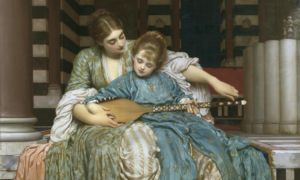 Fame is a fickle thing – and this point is well made by the painting of an opulently dressed girl being taught to play a stringed instrument that now hangs in the City of London’s Guildhall Art Gallery.

Researchers preparing for an exhibition on Victorian attitudes to childhood, called Seen and Heard, have found that Connie Gilchrist, the forgotten young musician in painter Frederic Leighton’s canvas entitled The Music Lesson, was once the toast of England and appeared in many Christmas pantomimes in the West End of London as well as in countless burlesque shows. …Read More

Pictured: The Music Lesson by Frederic Leighton, 1877. The young girl being taught to play the saz (a Turkish lute) is Connie Gilchrist