Demas Nwoko’s lost masterpiece discovered under a bed in Boston

Demas Nwoko’s lost masterpiece discovered under a bed in Boston 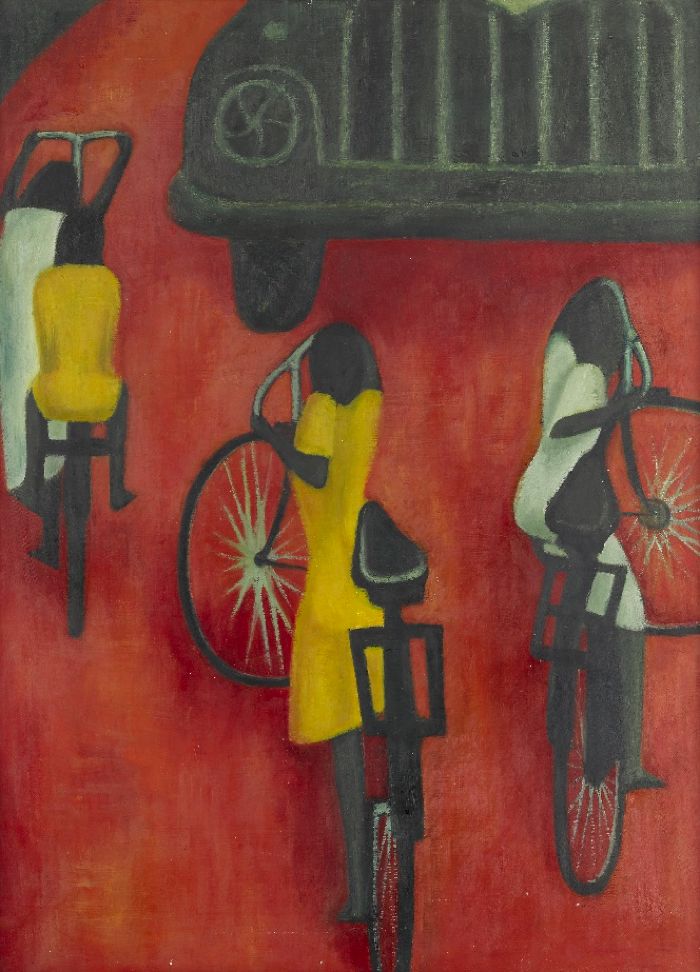 The Bicyclists, a lost masterpiece by Nigerian artist Demas Nwoko, will be offered at Bonhams new sale of Modern and Contemporary African Art in New York on Thursday 2 May 2019. The work, which had not been seen since 1961 when it was first exhibited at the Mbari arts festival in Lagos, was recently found under a bed in Boston, Massachusetts. It has an estimate of US$70,000-100,000.

The story of the painting’s discovery, which shows four children on three bicycles swerving ominously out of the path of an oncoming lorry, is extraordinary. It was unearthed in the house belonging to the descendants of J. Donald Kingsley, the former head of the Ford Foundation in Africa. Kingsley was a collector of African Art and bought the painting while acting as advisor to the civil service in Nigeria between 1958 and 1962. On his return to Boston, The Bicyclists came back with him and it wasn’t until Kingsley’s family were clearing out one of the rooms in the house that they found Demas Nwoko’s masterpiece.

Nwoko, born in 1935 in eastern Nigeria, was one of the most important artists of his generation. Yet surprisingly, little is known about the artist’s life. Writing in the spring edition of Bonhams Magazine, the Nigerian-born Booker prize-winning novelist Ben Okri, described Nwoko as a ‘reclusive, something of a Salinger figure in African Art’. Yet, he was also a founding member of the Zaria Art Society, along with Uche and Simon Okeke, which started one of the most distinctive movements in Modern African Art. The artists, known as the Zaria School, merged methods of traditional African art with modern European ideals and The Bicyclists is an indication of their achievement.

Bonham’s Director of Modern African Art, Giles Peppiatt, commented, “The Bicyclists is a signature work by Demas Nwoko and one that has been missing from the art historical canon for far too long. I am thrilled by this exciting discovery. It has come to market at a momentous moment for Bonhams coinciding with our first Modern and Contemporary African Art sale in New York.”