I am because we are – Group exhibition at Artyli.com

I am because we are – Group exhibition at Artyli.com

Available on: www.artyli.com and artsy.net

“I am because we are”

“I am because we are” is an exclusive online group exhibition by Artli.com, showcasing the artwork of four South African Artists who are attracting ongoing international attention.

The African philosophy of “I am because we are” informs us that the sense of self is shaped by others and is understood from a perspective of the community that expresses compassion, reciprocity, dignity, harmony and humanity in the interests of building and maintaining a community with justice and mutual caring. As African artists, growing up in South Africa, where philosophies that elevate individualism, have been rejected as colonial, there is a movement by artists now which embrace what it means to be African in a space where contemporary art is defined by individualism, expression and thought without losing a sense of community. Khaya Sineyile, Andrew Ntshabele, Banele Njadayi, and Ludumo Maqabuka, are four African artists who on their journey as artists express their thoughts through their unique interpretations and studio practices.

Newspaper commonly discarded, in the talented hands of Andrew Ntshabele is transformed into a surface, upon which thoughts are shared and stories are told through the visual power of art. In his latest series of artworks, “There is a Shaking in Society” series, Andrew boldly approaches the subject of the poor people in our communities, who have been devastated by Covid19. Ntshabele continues to focus on urbanization, but his works have been strongly influenced by the impact of Covid19 in Johannesburg, South Africa. His interest in the city was developed from an early age, where he now resides and works and is constantly confronted by poverty, pollution, and urban decay. His work is a form of social commentary that deals with the socio-economic challenges that the majority of black South Africans face in South Africa. Ntshabele is a prolific artist, having won numerous awards for his work and has been involved in many exhibitions in South Africa and abroad and his works can be found in numerous international collections. 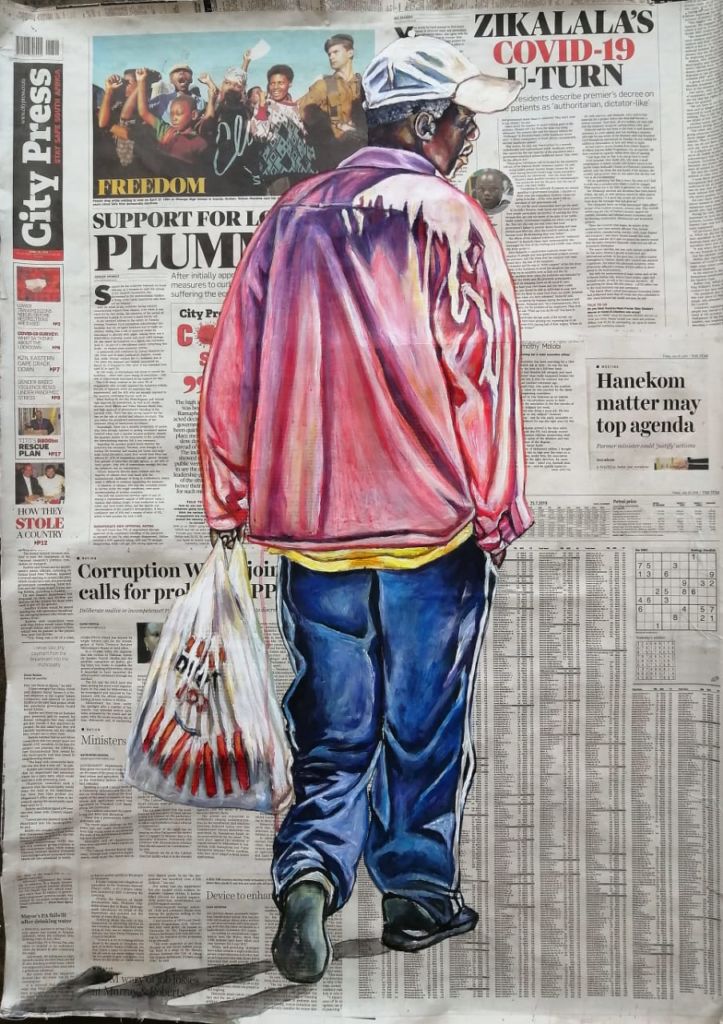 Andrew Ntshabele | There is a shaking in society 6 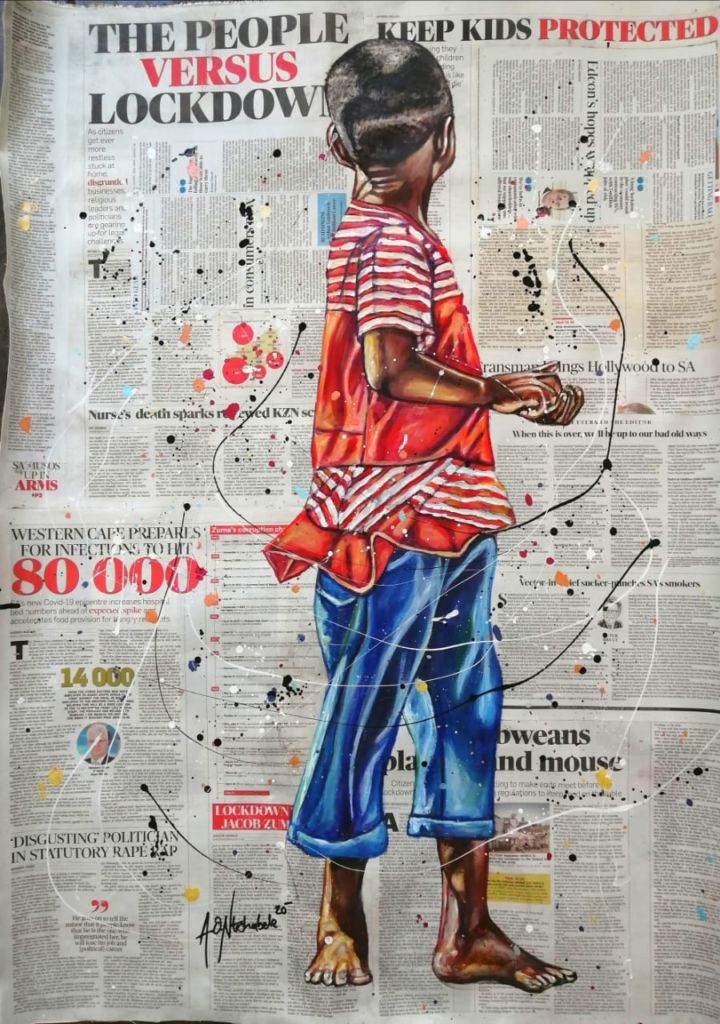 Andrew Ntshabele | there is a shaking in society 4 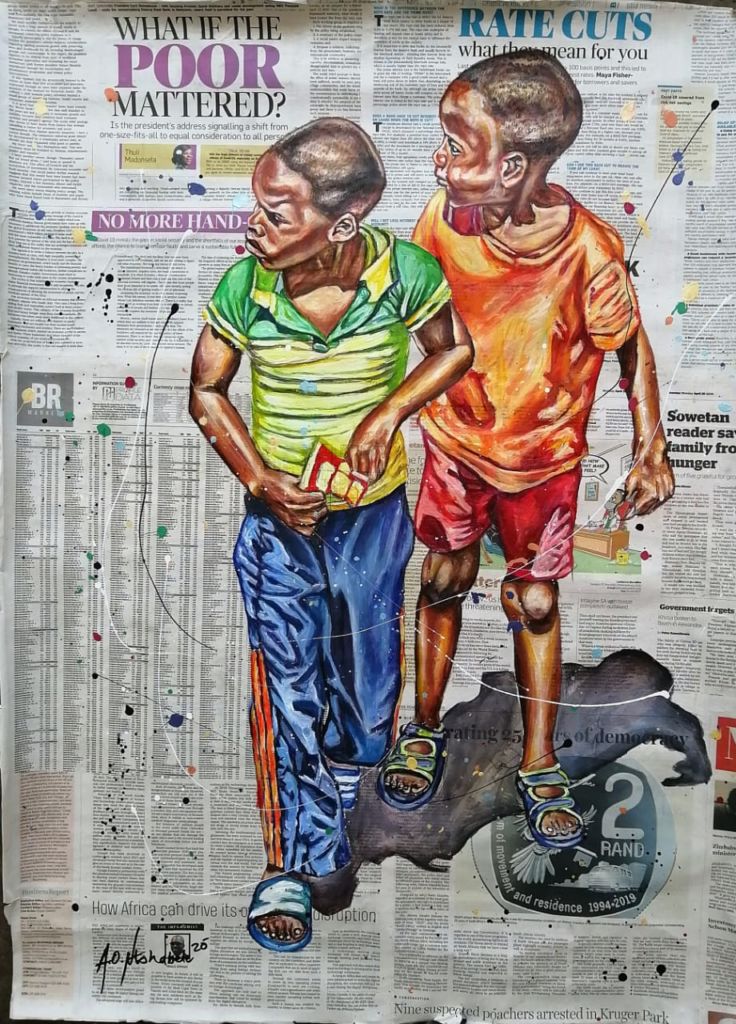 Andrew Ntshabele | There is a shaking in society 3

Khaya Sineyile is from Nyanga, Cape Town, South Africa. His subject matter ranges from township scenes to more introspective themes referencing childhood games and observations on religious hypocrisy, faction-fighting, and witchcraft. Most recently he turned his attention to the effects of social inequality, specifically relating to the South African family structure. His confident brush marks and considered palette convey a rawness which he contrasts with strong well-defined edges – an approach that lifts the image off of the background and introduces elements of playfulness, wit, and humour. Sinyile’s work has been exhibited in numerous international and national exhibitions, and his work can be found in many prominent collections across Africa and Europe. 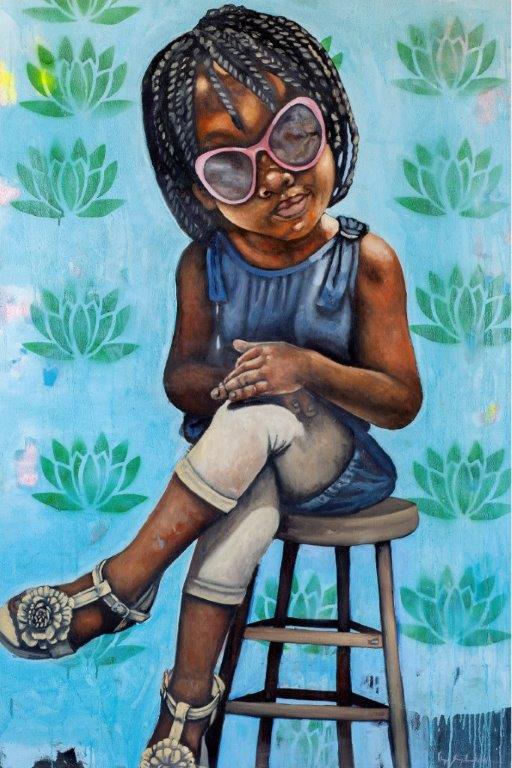 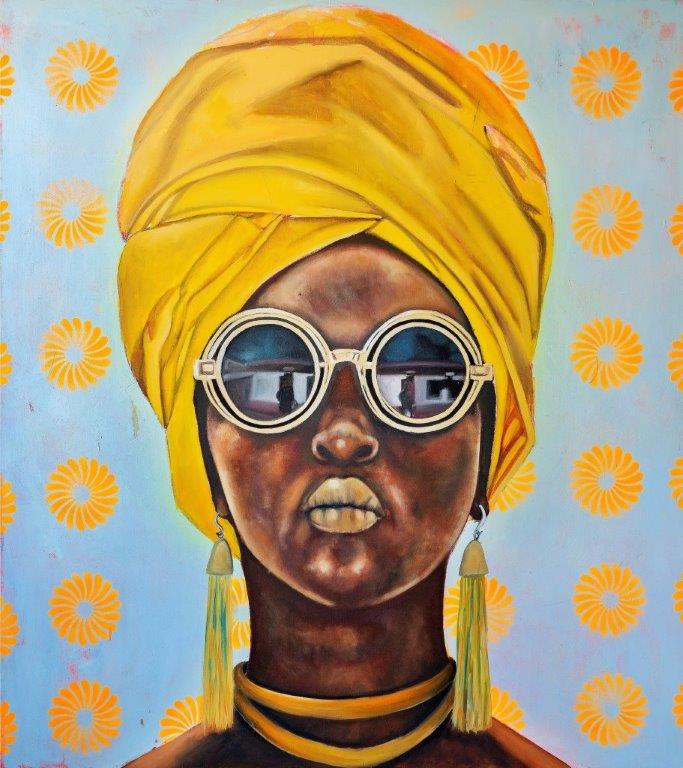 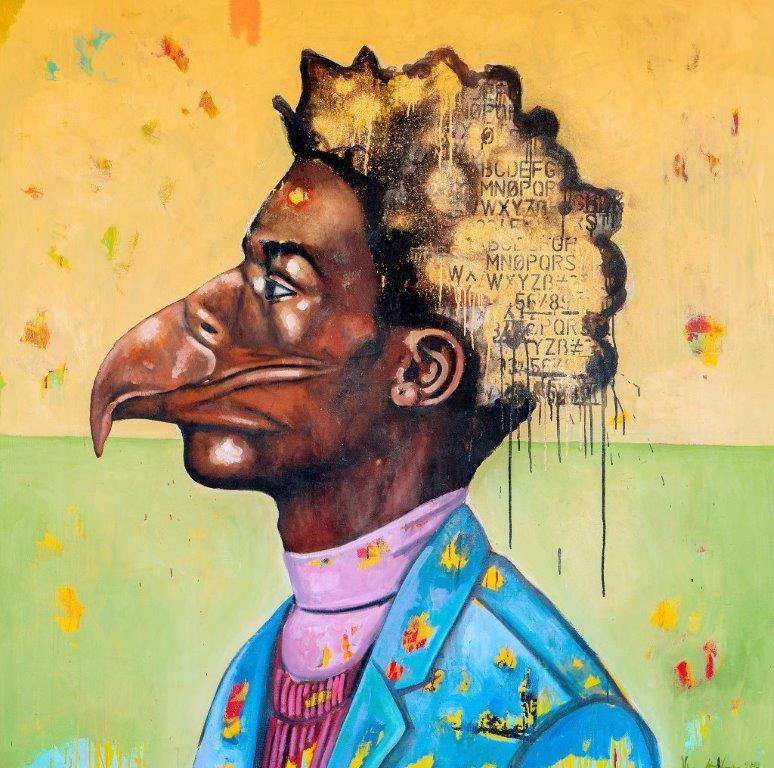 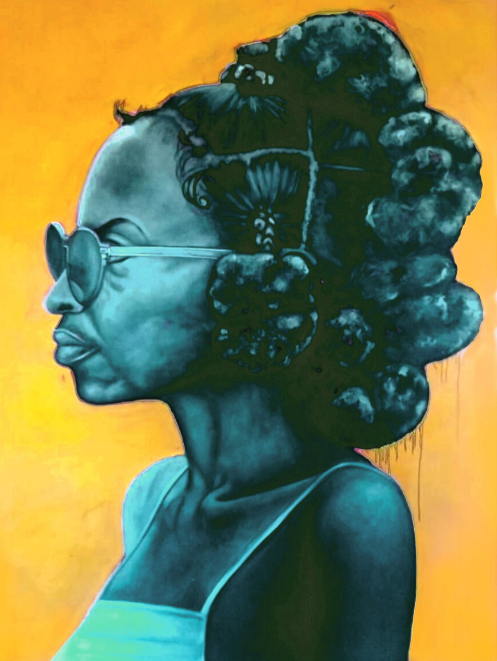 Banele Njadayi was born in Grahamstown, Eastern Cape, and moved to Port Elizabeth, South Africa, where he studied and now works as a professional artist. Njadayi is popularly known for his paintings in which he masterfully applies vibrant colours to draw out the energy and atmosphere of the varying environments that he depicts. Njadayi’s subject matter reflects on themes around urban living and identity. In his paintings, he portrays portraits of people busy with their daily lives. His work documents fragments of his subjects’ personal stories and is also a collective story of women represented as pillars of strength in homes and society. These identities, both personally and collectively, are painted to convey the desire, purpose, and strength of the poor in a mostly working-class community. Njadayi is hardworking and prolific, he has won several notable awards for his work and has exhibited both nationally and internationally. His work is featured in many prominent collections. 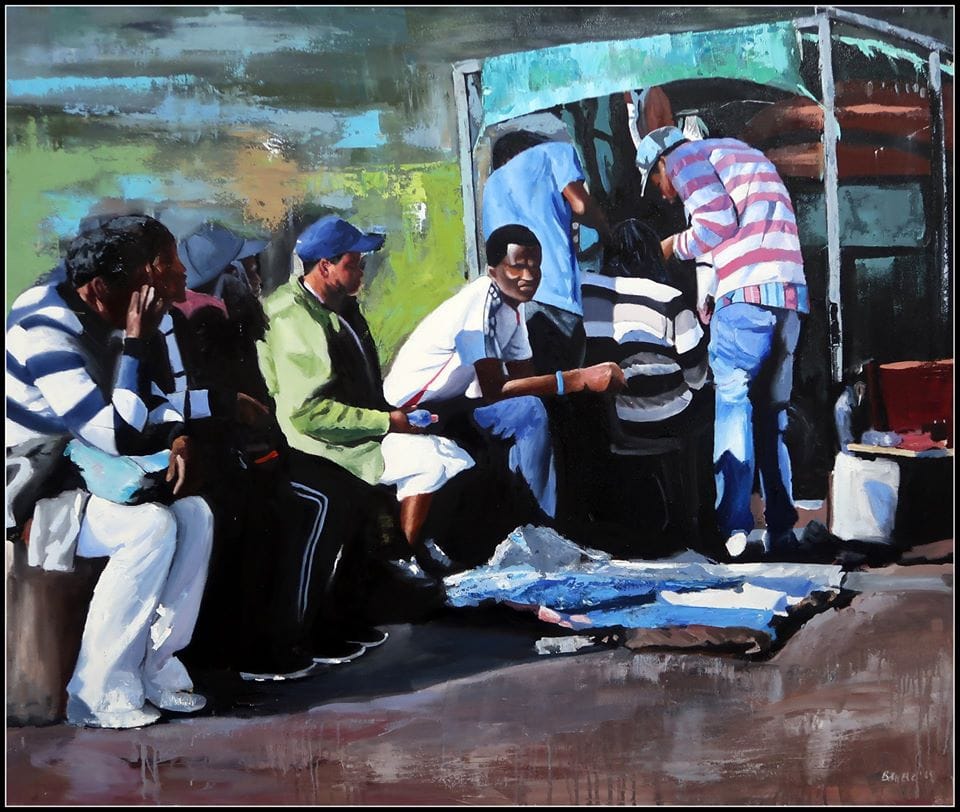 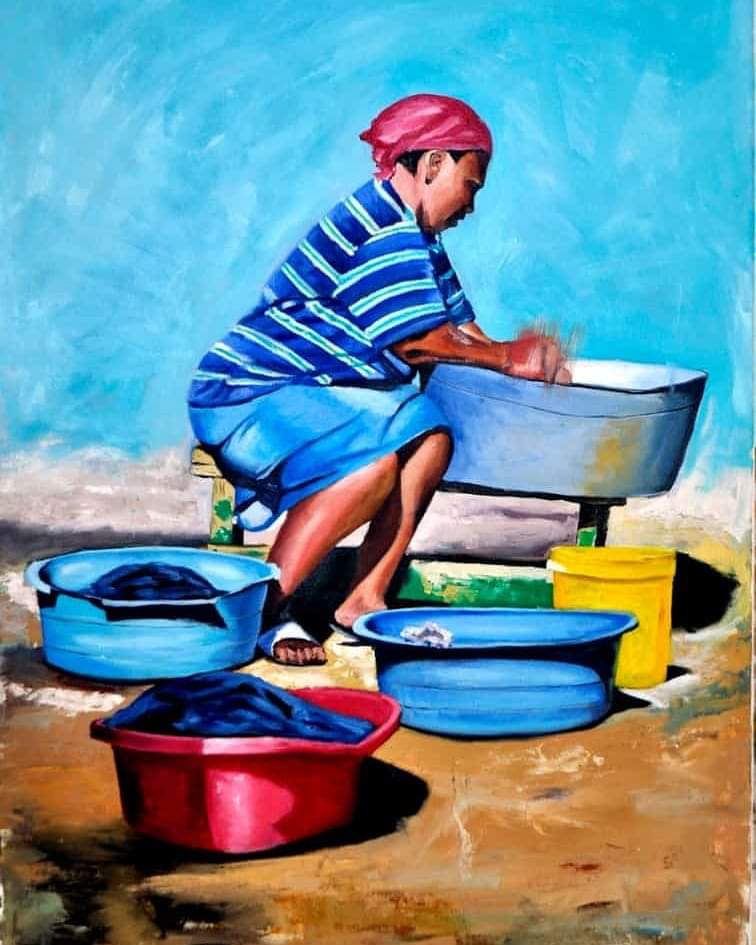 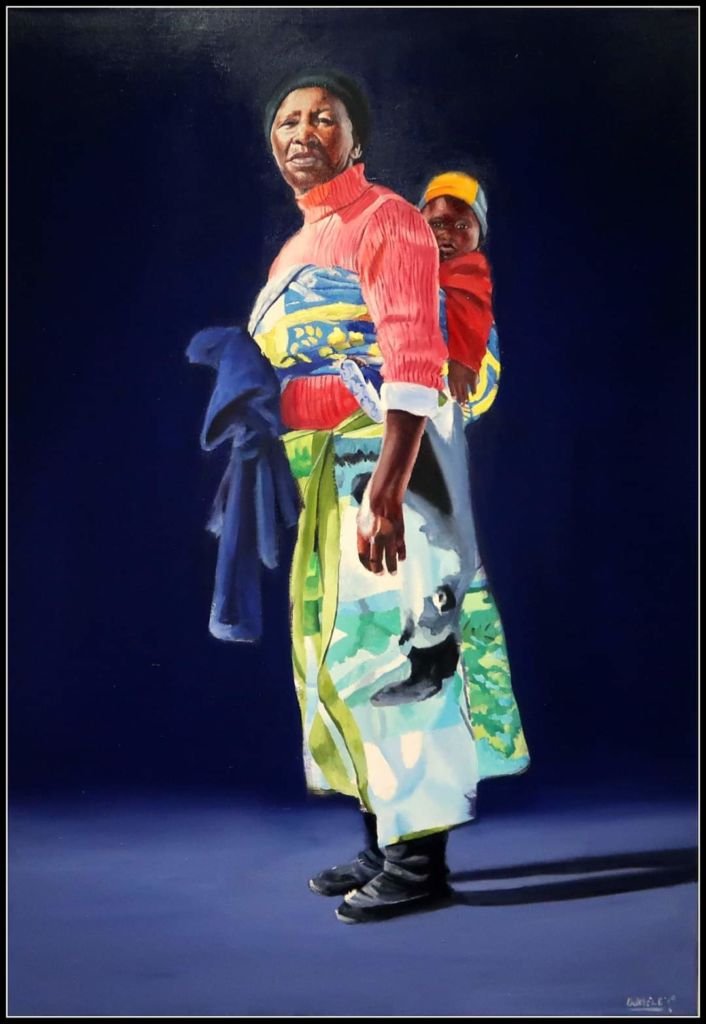 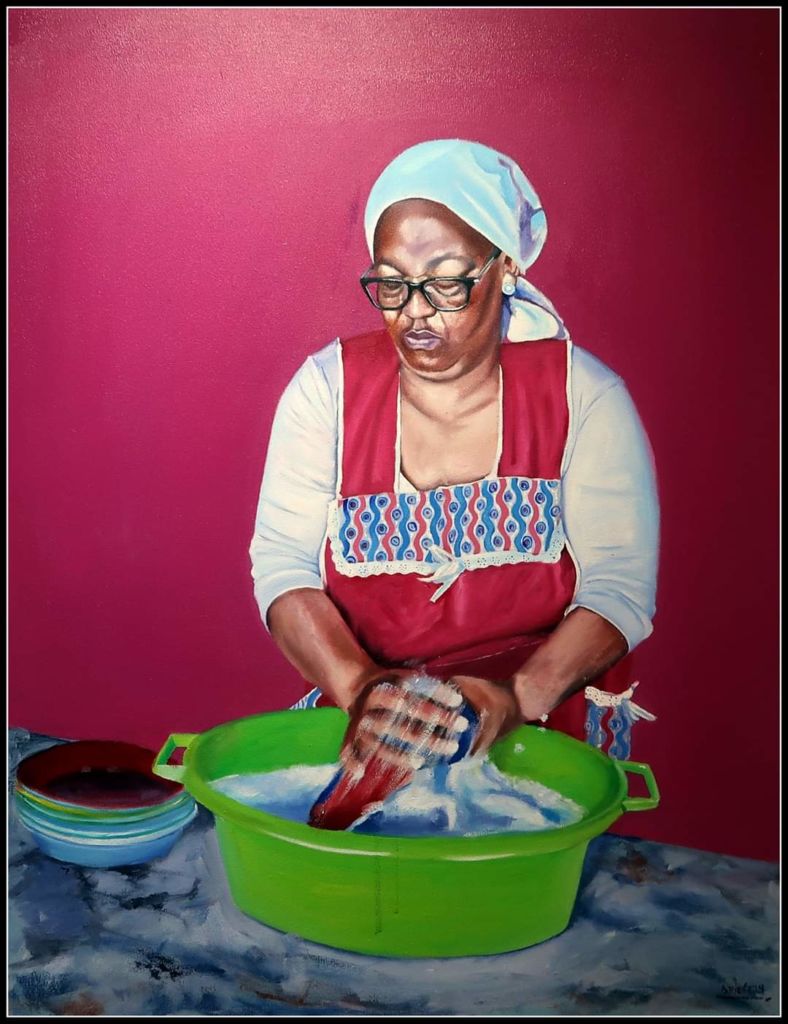 Ludumo Maqabuka was born in Umtata in the Eastern Cape, South Africa, and now resides and works in Johannesburg. Maqabuka experiences modern society as highly defined by the influx of popular culture and the influence it has on new ideologies and personal identities. Ludumo is an artist whose work is at the juncture of where contemporary street art meets everyday life in Africa. His work invites you in to explore a liberated colourful visual language, expressed through bold mark-making and portraiture, creating a unique blend of graffiti art, abstract expressionism, and pop art. His work highlights life in townships and interprets South African society with all its complex dynamics, exposing the societal norms and the formation of constructed identities within a frame of popular culture. Maqabuka is a prolific South African artist, has exhibited in both group and solo exhibitions in and around South Africa, and whose work can be found in numerous local collections. 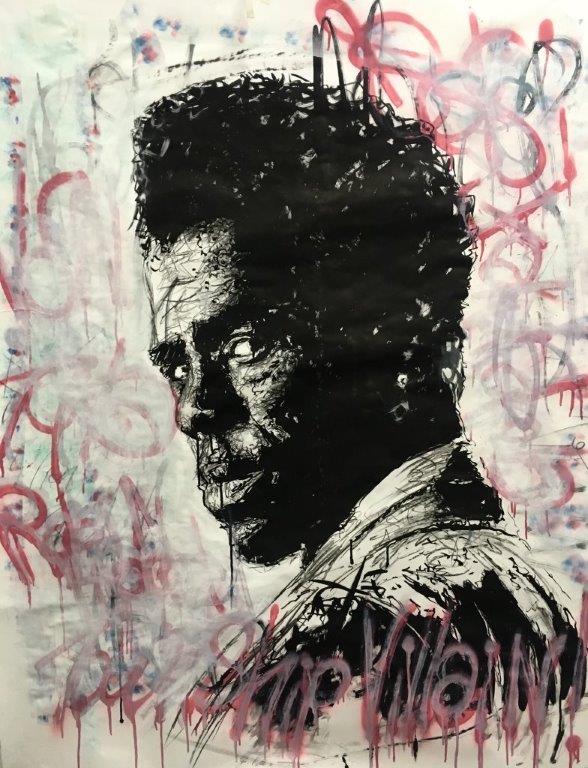 In this time of the pandemic, where Covid19 threatens us not only individually but also as communities, countries, and as humanity, we become more malleable and open to embracing change and new philosophies. Trends that were once on the horizon, such as the 4th industrial revolution, are now more readily adopted, bringing with them global change. When, as a society, we can see and embrace our communities afresh, when we adopt new trends on the horizon, but still embrace our past as Africans, we can engage with contemporary art as a vehicle for authentic self-expression within community, within the philosophy of “I am because we are”. When we do this, we also begin to embrace post-africanism, which as a contemporary philosophy applicable to art, post-africanism is best described by Denis Ekpo, Professor of Comparative Literature at The University of Port Harcourt in Nigeria who says “It’s anchored in a conscious openness not just to new experiences but to new interpretations of old experiences in the light of changing knowledge.”