In Conversation with Buhle Nkalashe

In Conversation with Buhle Nkalashe 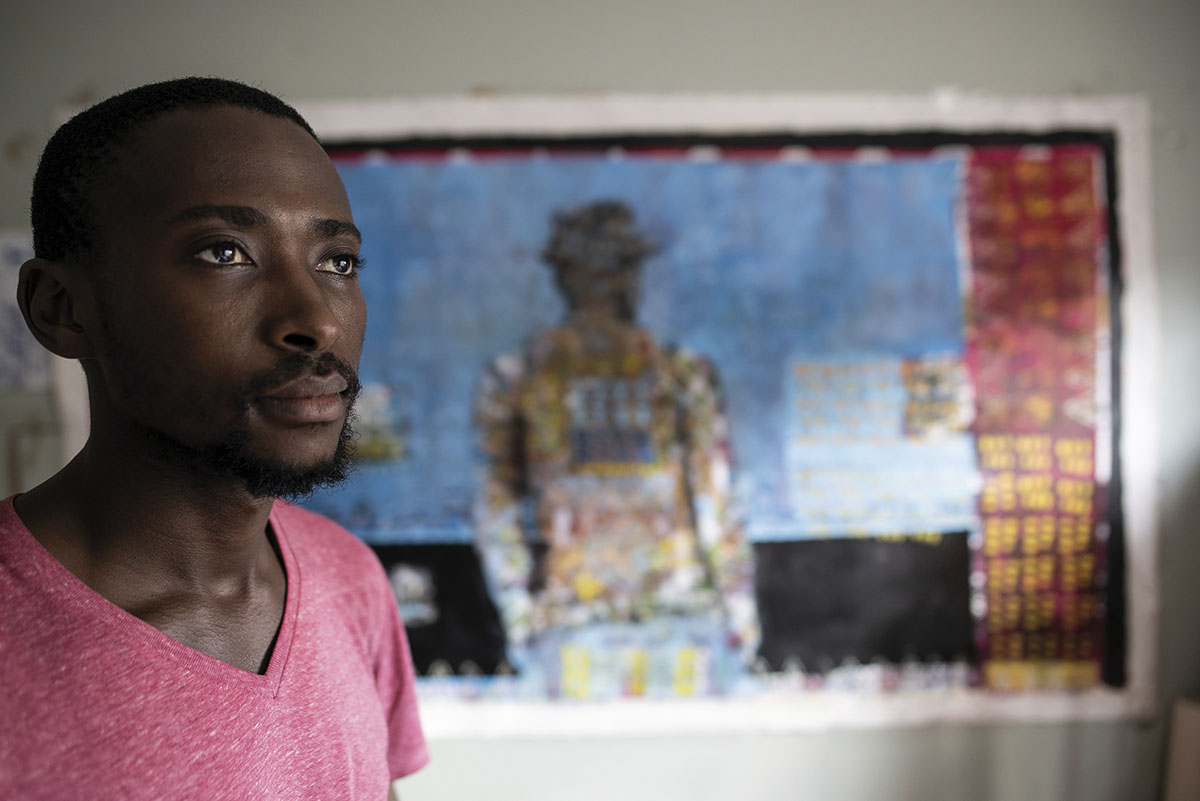 “My name is Buhle Nkalashe. I was born in 1994 in Cape Town to a high school teacher and a carpenter. I was born on the turning point of South Africa and Africa as a whole, becoming a New Democracy. My work conveys what it means to me to be a New African in my own eyes, with regards to opportunity and diversity, and celebrating inspirational South Africans.

I mainly focus on South Africa and how people today are making big headlines and making a name for themselves as well as celebrating their skin, traditions and culture. In Africa’s history there have been many events that have crippled Africans and their country. This has created a ceiling which has prevented many Africans to reach their fulfilled destinies. Not only were we crippled mentally but spiritually as well.

Today we still face challenges that have left a big dent in our hearts and spirits. It has also put Africans in a disadvantaged state where some of us even think about being another colour, but have also noticed a new identity in which there is progression of a positivity and pride in one’s own being and heritage.” 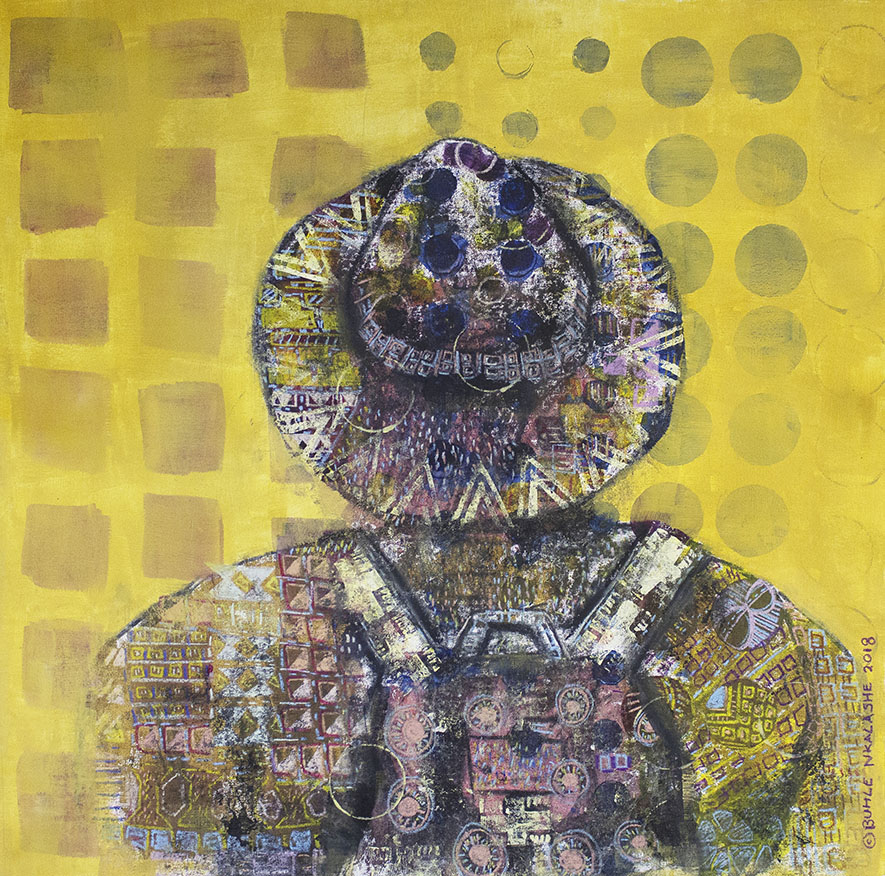 Have you always had an interest in making art growing up or were you influenced by your surroundings and childhood experiences?
Actually I didn’t. When I was very young I was into sport and loved it. Growing up I never gave art much attention. It was something that I just enjoyed doing. I saw it as a hobby and a phase I was going through. I didn’t even think I was good at it.

People around me kept it alive because they thought it was a very strong power I possessed. When I was seven years old, my mother took me to Frank Joubert (now called the Peter Clark Art Centre)for art classes. Initially I thought she didn’t want to see me bored and lonely, since I was the only child. But instead, she thought I could use some improvement in art.

My art teachers at high school, Mrs Mandy Colman and world renowned artist, Hasan Essop, also encouraged me to always keep it with me in whatever venture I take after high school. Like a treasure chest which grows every time, I invest in it with time.

Having been born into a new SA dispensation, your artist statement is very bold and emotional with references to trauma linked to identity. Does any of it apply to you personally and is The New African a construct by which to realise a new and positive identity?
I don’t think of it as trauma being linked to identity, but how trauma has affected identity. It has not affected me physically but mentally instead, as the community and family I grew up with provided an idea of what the norm is. This generally influences what we aspire to. If the norm is mediocrity and is motivated, then that is the life we know.

For years I have embraced mediocrity and it is only recently that I’ve discovered individuals who are beyond the colour black who are not limited by expectations placed upon it.

The New African is not a construct but rather an identity which is already existing and rapidly growing. Yes, I have realised it as being new and positive and I feel it is my responsibility to share that as it has influenced me to think of myself as a far greater human being. 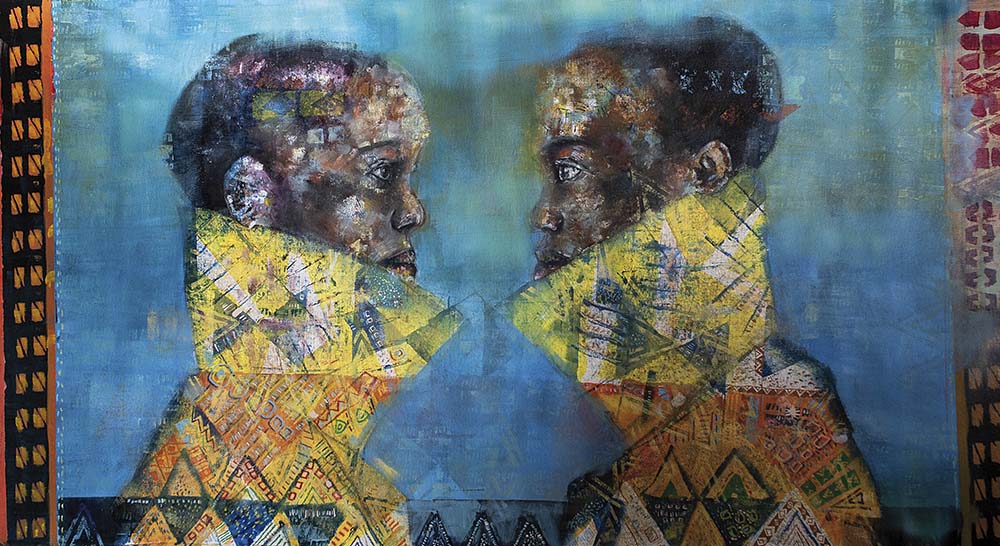 As a young artist living and working in SA today, what are the main stumbling blocks for you in the attempt to make a living as an artist.
My biggest obstacles have been depriving myself of sleep as I need to keep this passion in my life alive. Another main block is transportation of artworks as well as studio space since I work with large scale artworks.

I appreciate what I have and I know as time goes on it will get better. As an emerging artist I’ve learned to live below my means as I need enough resources to be able to access materials and services which can help me.

From Inner Souls to the Perception of Eggs series that you have done; who and what are your main influences?

My main influences are Paul Gauguin and Lionel Smit as I found it fascinating how they mixed very bright and dark colours. I thought colour would be a great way to emphasize emotion. I am also strongly influenced by Andrew Salgado as his work is very strong and bold. I find it fascinating when he uses shapes and patterns.

The upcoming solo exhibition, The New African, will be your first major show. Will this be a new body of work and new direction for you?
Yes, this is a completely new body of work. I feel that I have allowed my mind to expand and think freely. This process has allowed me to do what I want to show the audience, instead of what they want to see. I believe I have found my new trademark style of painting.

October having been youth mental health awareness month – university students experience depression, stress and anxiety everyday without any knowledge that they are suffering from a mental illness. Do find that artists such as you have an important role to play in creating awareness?
Yes, I believe we do. Personally, I have felt depressed and stress. The difficult thing about mental illness is that you cannot see it and therefore sometimes it is hard to explain something you cannot see. Art can be a weapon to combat these demons, because as you draw or paint by letting your heart guide your hand, you soon realise what’s bothering you on that piece of paper and notice that the problem is not that big.

Thank you for taking the time to chat with the Art Times and we wish you well with your upcoming solo exhibition. Do you have any plans of taking the exhibition elsewhere in the country or abroad?
Thank you for having me. I really appreciate this opportunity. I plan to do another solo exhibition in Johannesburg as well as another one abroad. I feel that I need to share this vision all over the world as it tells a story from a new African mindset which expresses a positive and new African identity.