Inside the U.S. Army’s Warehouse Full of Nazi Art

Inside the U.S. Army’s Warehouse Full of Nazi Art 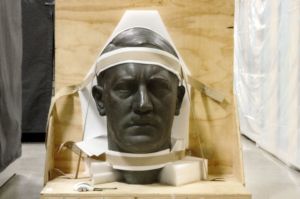 January 4, 2021
A sculpture of the head of Adolf Hitler
One of the world’s largest collections of Nazi propaganda is housed at Fort Belvoir, in Virginia; much of it is virulent, and most of it is never seen by the public.Photograph by Robert C. Sanchez
In the final days of the Second World War, a train loaded with relics of the collapsing Third Reich was speeding toward the Czech border when American pilots, flying P-47 fighters, spotted it and opened fire. The train ground to a halt in a forest, where German soldiers spirited the cargo away. They were pursued, not long afterward, by Gordon Gilkey, a young captain from Linn County, Oregon, who had been ordered to gather up all the Nazi propaganda and military art he could find. Gilkey tracked the smugglers to an abandoned woodcutter’s hut, where he pried up the floorboards and found what he was looking for: a collection of drawings and watercolors belonging to the German military’s high command. The cache had survived the strafing, only to be afflicted by mildew and a family of hungry mice. “They had eaten the ends off many pictures, large holes in a few, and gave all the cabin pictures an uneven deckle edge,” Gilkey wrote.