AT FEATURE: Looking at Long Street and other city paintings…by John Kramer at the Cape Gallery

AT FEATURE: Looking at Long Street and other city paintings…by John Kramer at the Cape Gallery

An exhibition of oil paintings by John Kramer at the Cape Gallery, Church Street.
From 8 November 2021
By Hayden Proud 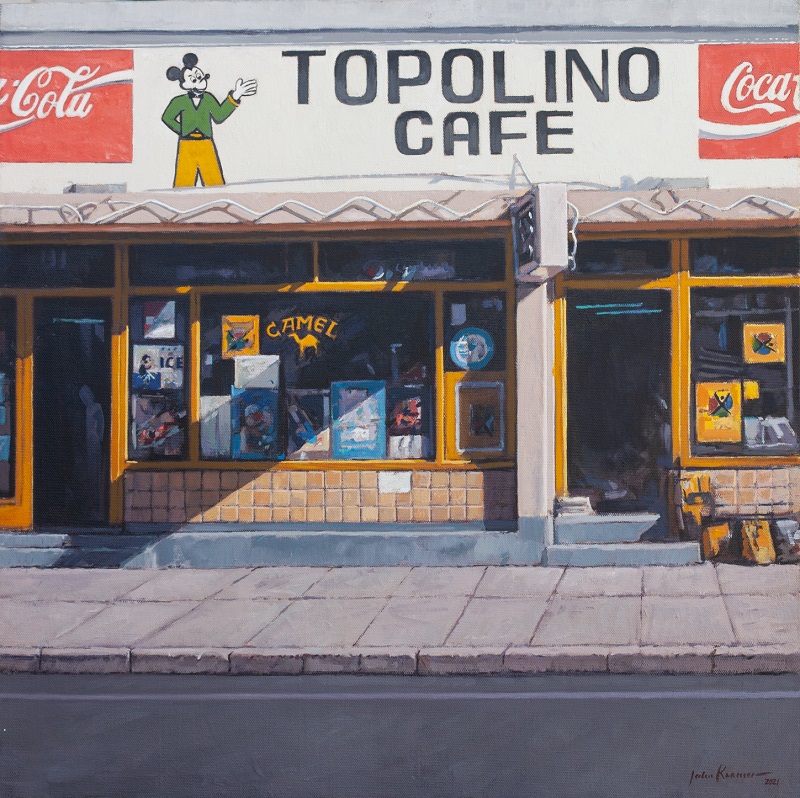 At this time, the depredations of Covid-19 have been nowhere more in evidence than in the universal spectacle of emptier streets; of silent, shuttered shopfronts and abandoned showrooms. Cape Town’s once-bustling CBD is only now showing signs of economic recovery. The closure of so many bars, restaurants and shops on Long Street, one of the city’s oldest and most colourful, reflects this dramatic transformation of our urban environment. A barely noticeable, gradual pace of change has given way to dramatic desolation within a mere 18 months.

For resident Capetonians, John Kramer’s latest exhibition Looking at Long Street and other city paintings thus comes as a timely ‘remembrance of things past’. Although raised in Worcester and known for his paintings of buildings in the dorpies of the platteland, Kramer is nevertheless a long-standing habitué of Long Street and what is colloquially known as Cape Town’s ‘city bowl’. A resident of the Gardens area, he is a graduate of the local Michaelis School of Fine Art, and he was also employed at the nearby SA Museum as a display artist. He is one of South Africa’s most committed and accomplished realist painters.

Kramer’s special attachment to Long Street is made clear when he says; ‘having walked up and down the street over many years I would always enjoy the kaleidoscope of colour and textures and how the play of light affected the look of the buildings at different times of the day or year. The light in the morning would be dramatically different to shadows cast in the afternoon’. With his trained and selective eye, Kramer has, over the years, assiduously photographed many of his favourite locales on this street at different times of the day and year. This repository of images has only now been brought forward to serve as reference material for his second exhibition this year. His archive is of particular interest as a record of buildings or businesses which now only exist as memory. Thus this latest exhibition, aside from demonstrating Kramer’s usual painterly accomplishments, posits something far more serious. It shows and engagement in a much deeper dialogue with memory and local history that speaks directly to a high-density urban population than has previously been the case.

Aside from the Long Street subjects, now-vanished shopfronts from other parts of the CBD are also raised, as if from the dead, by Kramer’s brush. Petersen’s famous barber shop on Parliament Street (which also did a brisk trade in theatre make-up and joke accessories) and the famous Topolino Café on Kloof Street were places that were once definitive of the City’s character.

There is something quietly theatrical about these latest pictorial resurrections. On one level, they seem like empty, painted stage sets awaiting the re-arrival of actors to repopulate them. However, the ‘drama’ that actually unfolds in them is far more subtle, as Kramer deftly performs and demonstrates his repertoire. Manipulations and accentuations of colour, light and shadow lift these final painted images onto a higher level of reality than exists in the mundane photographs that served as their source.

There is, of course, a strong element of nostalgia underpinning the presumed objectivity of these works. Kramer confesses his admiration for Long Street’s surviving Victorian-era buildings, many with cast-iron pillars and decorative balconies that feature what South Africans have come to term broekie lace. While the latter serve as useful compositional and framing devices, the realist in Kramer is resilient enough to resist restoration of their damaged and missing elements. Unlike the well-known Désirée Picton-Seymour (1923-1991), who made pristine reconstructions in her detailed illustrations of Cape Town’s Victorian buildings, Kramer prefers their abject condition. His work, to use a descriptor once applied to the American realist Edward Hopper’s famous painting Early Sunday Afternoon (1930), is possessed of a ‘hideous beauty’ that does not pay homage to Victorian ideals of the ‘good’ and the ‘lovely’. 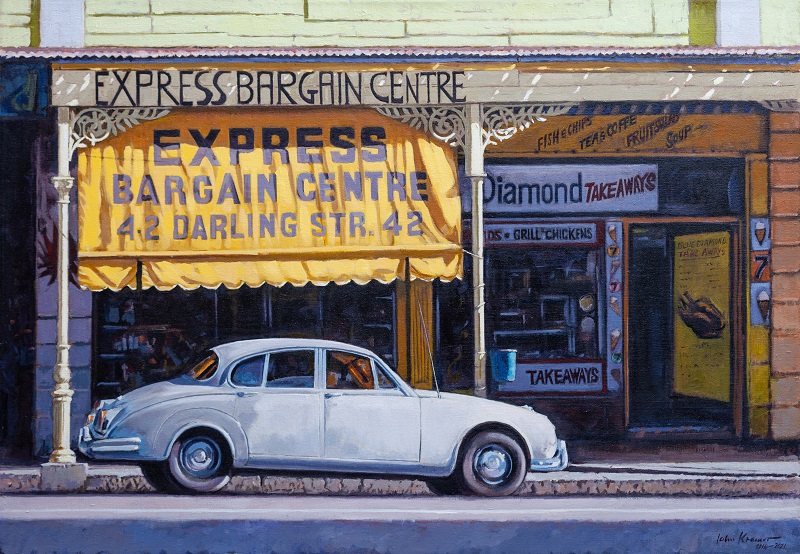 Looking at Long Street and other city paintings follows hard on the heels of Kramer’s last exhibition of platteland scenes held in July-August in Prince Albert. A striking difference in his approach to the handling of pictorial space is seen by a comparison of these two exhibitions. The Prince Albert paintings showed him grappling with wider vistas, deeper perspectives, higher skies and the merciless glare of Karoo light. These new city paintings, on the other hand, show him drawing again on his accomplished sense of compositional formalities and a rendering of much shallower spaces. Whereas his Prince Albert exhibition essentially dealt with ‘buildings in landscape’, the present show marks a return to the idea of the ‘building as still-life’. In the Long Street paintings, the infinitude of blue sky is eliminated. Façades and pavements are once again established parallel and much closer to the picture plane. Although this show marks a reprise of what he has always done best, Kramer still regards this more confining approach as an ‘exciting challenge’. He deals, as he says, with ‘the facades of buildings with their varying colour combinations and textures; the way light and shadows fall, the verticals and horizontals formed by pillars and balconies, breaking the works into geometric shapes’.

Thus, while Kramer’s fascination with the abstract possibilities underlying his deliberately narrow choice of subject matter and his realist style continues, he has by no means exhausted its possibilities. Despite recent sorties into wider and deeper spaces, this new exhibition affirms his significance as a key South African realist who is sustained by his command of formal pictorial construction. 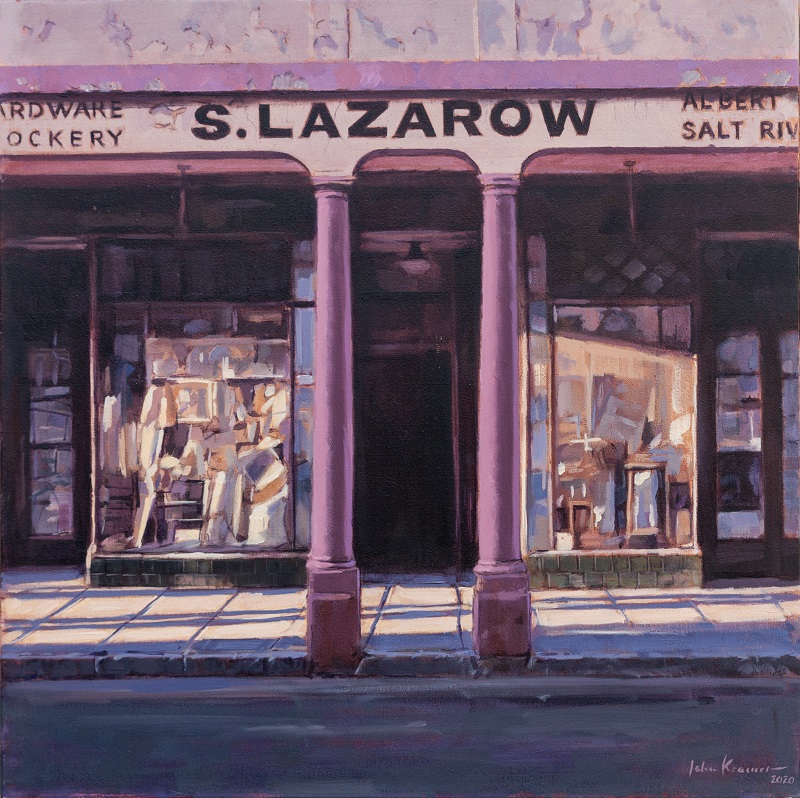 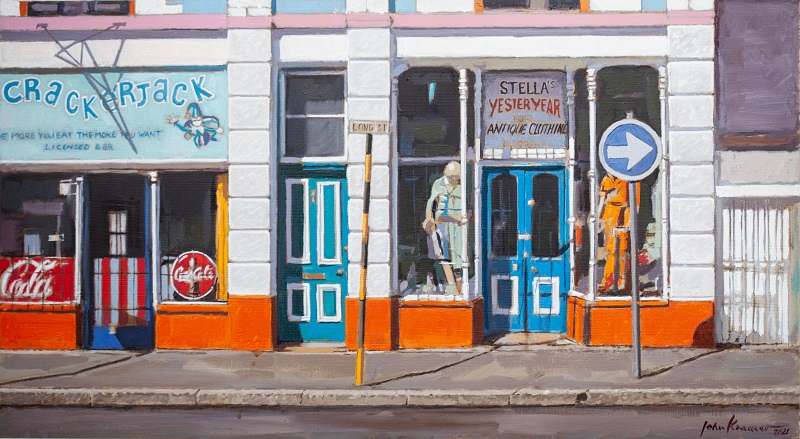 Crackerjack, Long Street 2021 | Oil on board 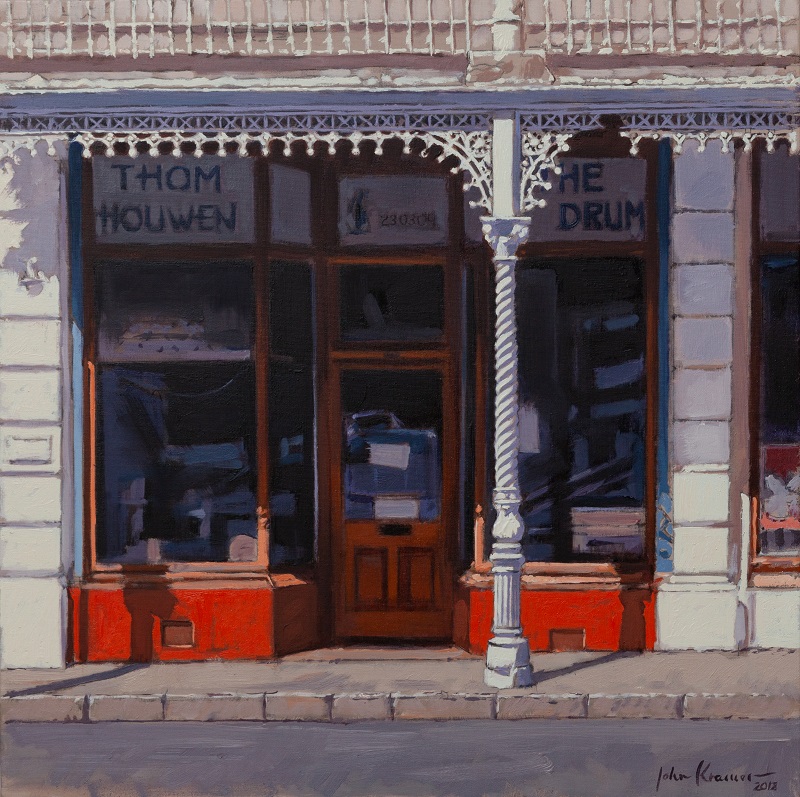