But
Isn’t it funny?
That when they ask about black childhood,
All they are interested in is our pain,
As if the joy-parts were accidental.

I write love poems, too.

Koleka Putuma’s words, from her poem ‘Black Joy’, return to me. I am in Nelson Makamo’s studio at the Everard Read Residency in Franschhoek. If there is one artist who creates love poems too, its Makamo. For him the ‘joy-parts’ are never ‘accidental’, they are fundamental. ‘My work will always talk to the grace of humanity’, he says. That he has become the black poster-child for the black poster-child – Makamo is best known for his portraits of bespectacled children, an aspirational sign – is the inevitable by-product of hype. That this iconic image of the child with round glasses graced the cover of TIME in February 2019 for a special issue titled ‘Optimists’, edited by Ava Du Vernay, the director of ‘Selma’, consolidates the hype. The darling of collectors the world over, especially in the West in which black portraiture is the most avidly sought-after commodity in any progressive collection – it is unsurprising that Makamo’s value has stratospherically catapulted. This is not a good thing, type-casting is an affliction. 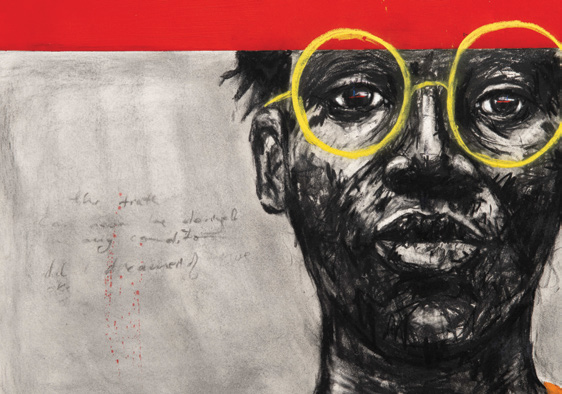 If Putuma is correct to remind us that the black body is not a cipher for pain alone, it is because she seeks to dispel prejudicial projection. And yet, projection persists. The black body is rarely seen as other than the sum of inherited desecration – the condition plus ultra of oppression. While this historical fact is indisputable, Putuma refuses its prejudicial simplification. That her poetry collection, Collective Amnesia, is justly feted and widely translated, signals a desire to reconfigure black life. As Lebogang Mashile notes in the foreword, ‘Collective Amnesia is a lesson in rewriting myths … Re-membering what has been broken … how to thrive’. This reconstruction is on-going.

If black portraiture now defines Western taste – the West, problematically, remains the taste-maker – it is because of a thoroughly justifiable need to rethink the art canon and support greater inclusivity. The downside, however, is that the taste for black portraiture can be programmatic and tactical, thus a deflection from the a priori conditioning which for centuries has ensured its marginality. Its newly minted prominence must therefore be considered circumspectly. To what extent is the newfound celebration of black portraiture a variant of ‘blackface’ – a matrix and matter of white dealerships in South Africa and elsewhere commodifying black bodies? When a dealer asks a black artist to focus on painting black faces, because it’s the in-thing, we know that we’ve entered a murky realm. This view is fact not conjecture.

In Makamo’s Franschhoek studio I discover a counterweight to cynical pragmatism. His township portraits, which vary between medium-shots and close-ups, are not the product of cynical influence, they stem from an integral grasp of the health of the community in which he was raised. At any point in a day, he could encounter ‘theatre’, lives wholly engrossed in a daily wonder. Made with charcoal, acrylic, ink, and pastels – Makamo also works in oil – the works are taped to the walls. What immediately strikes one is emotion – Makamo emotes, draws one into the theatre of the moment. But what is more striking is the quality of feeling. If the works possess a deep structure of feeling, it is because they are life-affirming. This is his hook, why his art has proved appealing. This affective joy, however, can be mistaken for a placebo, as real yet not – largely because of the way in which Makamo has been constructed as a sentimental artist, no different, say, to Norman Rockwell. I too have made this mistake. Psychically burdened by the impress of black portraiture – its insistence, persistence, definitional control of the art world – I have become wary. Makamo intuits this doubt. Seated beside the artist, pen and paper in hand, he tells me that ‘writers write what they understand’. True. But is writing solely projection? What of empathy? My initial presumption that Makamo’s power is generic – no different to a smiley face – I now realise to be an error, and recall a great insight in Njabulo Ndebele’s seminal work, The Rediscovery of the Ordinary:

The ordinary day-to-day lives of people should be the direct focus of political interest because they constitute the very content of the struggle, for the struggle involves people not abstractions. If it is a new society we seek to bring about in South Africa then that newness will be based on a direct concern with the way people actually live. That means a range of complex issues involving man-man, man-woman, woman-woman, man-nature, man-society relationships. 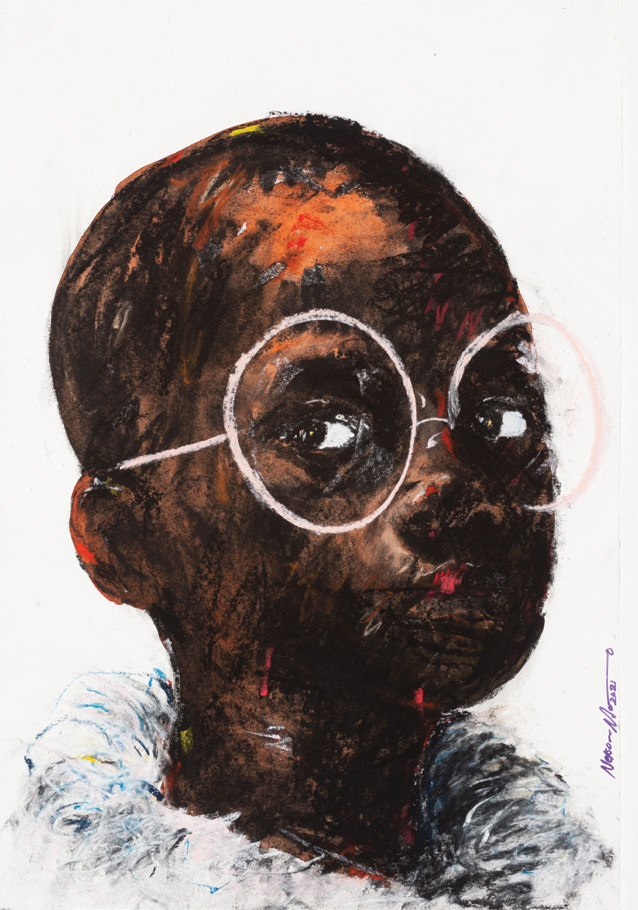 I am not here to disabuse the reader of this dream. That in South Africa in 2021 it has failed – Ndebele wrote these words in 1994 – in no way diminishes Makamo and Putuma’s desire to fulfil it. It is when one abstracts and subtracts human experience, when one fails to grasp a living being in its rich complexity, that art fails us. If Putuma’s insight is darker than Makamo’s, this is because she cannot let go of the obscenity and corruption built into the construction of black experience. In her closing poem, ‘Afterlife’, she notes,

This ‘sin’ is legion. It is the sin of continued oppression within a phantom democracy. The sin of the on-going commodification of the black body. The sin that stems from failing to grasp sublimity within the ordinariness of black life.

If Ndebele pits the ‘ordinary’ against the ‘spectacular’, it is because he recognised that ‘the spectacular document … is demonstrative, preferring exteriority to interiority … it establishes a vast sense of presence without offering intimate knowledge’. It is for this reason – against the spectacularisation of the black body – that Makamo has chosen to create love poems instead. His is a vision of incidental interior worlds. While the work is two dimensional, and, on occasion, illustrative, their greater heft is three dimensional. As a child he was as entranced by working with clay as he was by comic books. One cannot grasp the whole without embracing this spectrum. To reduce his work to one distinctive type – as I have done, and others persist in doing – is to fail to grasp the deft mix of surface and interiority, the relationship between mark-making and psychology, form and heart. While Makamo insists that he does not romanticise black life – that, in truth, he has experienced no psychically disfiguring pain – he nevertheless believes that his works contain ‘romance’. They are devotional acts of love, records of human grace.

‘Art is a fair politics’, says Makamo. ‘It helps us to liberate, reflect, challenge’. Njabulo Ndebele would agree. If, as a child, Makamo saw the ‘doctor as hero’, it was because ‘they helped people get better’. Similarly, his admiration for the engineer stemmed from their ability to solve a community’s problems. His vision of the role of the artist is that of the gift of the giver. Through art one can heal division, connect surface with depth, grow human possibility. It is telling, despite his meteoric rise, that Makamo ‘chooses growth over fame’. He ‘feels strongly as a child, still learning to be an adult’. His confidence is sincerely and softly expressed. That he made a pilgrimage to see Vusamazulu Credo Mutwa, spent three years with Hugh Masekela before he passed away, is the votive and proof that for Makamo ‘experience is a great teacher’. In his world nothing is predetermined or ever finite. Which is why I have had to qualify all presumption and prior understanding in light of the two hours spent in the artist’s company. Echoing Putuma, Makamo notes that ‘We’ve had our struggle, but that does not mean we haven’t enjoyed our own life’. And if ‘growth’ is key, it is because it allows for change and human betterment. A predictive and appropriative culture – one that objectifies and abstracts black experience – is a threat which one must address at every point in an evolving vision.

If Makamo is best known for his visions of children, one must recognise that he has in fact captured black life across the entire age spectrum. Whether young or old, what is always apparent is the artist’s ability to convey some sentient grace. If his figures are self-absorbed, they are also wholly in the world. The answer to this gift is simple and pure: ‘Raised in a community, you get to understand community’. This is why Makamo’s works contain no existential dread, no dissociative complex, no rage or reactive grief. And if he asks of himself, and of others, to be challenged, it is because ‘If you challenge me, you challenge me to grow’. At the root of this wish is the artist’s unbending desire ‘to play a certain role … to enlighten, to liberate’. Given his massive following on social media, Makamo assumes an acute responsibility. ‘I do not want to mislead’, he says. The burden of this position cannot be underestimated, especially given that Makamo occupies the apex in an art world problematically fixated with black portraiture. If the two hours with the artist has taught me anything, it is that one needs to seek art within that ilk which is challenging, reflective, liberatory. No one can predict the outcome of this taste for black portraiture. Its true significance – irrespective of its urgencies, pleasures, calculations – remains unresolved. However, what one can and should do is understand the complexity of its enunciation, the pitfalls of its fetishization, and, always, the great human promise it affords. Africa will give the world a ‘human face’, Steve Bantu Biko predicted. Like Koleka Putuma, Njabulo Ndebele, and Nelson Makamo, he was right.