Michelangelo’s memorable words, ‘I saw the angel in the marble and carved until I set him free’, are quaint yet enduring. We continue to think of sculpture as the extension of the human spirit, constructed in our own image out of marble, or cast in bronze. This view, Greek in origin, is not in fact the towering force it has been set up to be.

As the sculptor Bruce Arnott pointed out, ‘If we look at the really big picture (30,000 BC to 300 AD), this episode in Western cultural history may be characterised as a brilliant but flawed deflection from a mainstream of artistic expression’. In other words, no matter how enduring, Greek sculpture is a blip which has ignored the fact that art’s roots long predate this fetish, revived in the Renaissance and persistent today. What of art’s roots ‘in the pre-historic, pre-literate, ancient, tribal and folkloristic,’ Arnott asks, ‘what of the pre-Classical and therefore pre-Christian?’ 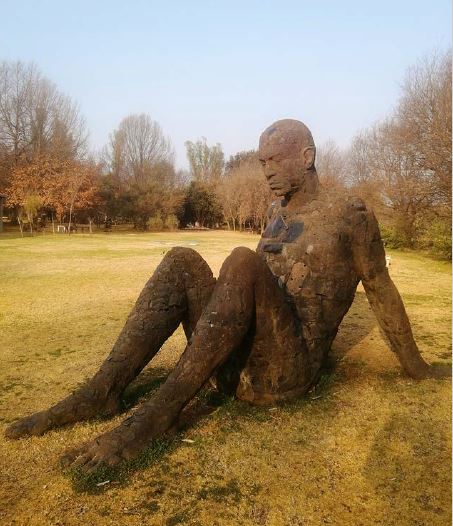 Sculpture is ancient and complex. Our recent obsession with toppling statuary, because it no longer reflects the ideals and ideas of the time, reveals the extent to which we have invested in sculpture as a mirror of ourselves, and why we’ve come to damn it when it no longer sustains that mirror. The mistake, of course, is to perceive sculpture as an ideal archetype. Life changes, and in our increasingly fluid and hybridised world it is unsurprising that the Greek ideal is falling by the wayside. As Percy Bysshe Shelley famously reflected in ‘Ozymandias’, it is hubris that is our weakness and profound error, for as the poet observes, in a desert lie ‘two vast and trunkless legs of stone … half sunk, a shatter’d visage’. It is the vanity of kings the poet challenges, the futility of a monument which now lies in decay – a ‘colossal wreck’

But sculpture was not only the province and privilege of kings. In the nineteenth century, for the first time, sculpture became a democratised phenomenon, with sculptures of great civic leaders, scientists, artists, assuming centre stage in the public domain across Europe. In fact, this rage to commemorate and embody the best in social values resulted in what came to be known as ‘statue mania’. It is ironic, and fitting, that over a hundred years later, the very statues built to exemplify the best in society are now being challenged. Whatever one’s viewpoint on the matter – I’m not one who believes that the future is best served by erasing the past – one cannot ignore the fact that everywhere in the Western world the emblems of empire and racial supremacy are being challenged. White mythology – specifically its Greek ideal – is under attack. The question remains, what will these statues be replaced with? New bodies representing new ideals? Surely the problem lies in figurative art itself, the assumption that human beings are the measure of all things?

But what of abstraction? Surely it is harder to pin down a claim when it is abstract? Isn’t this why the sculptures of Edoardo Villa are more enduring, say, than a sculpture of Cecil John Rhodes? Surely what is dated is not only imperialism but realism, an aesthetic which enshrines art as a mimetic mirror? There are other ways of seeing and experiencing life. And, in the realm of sculpture, we’ve found an immense flowering of new forms of expression. As Isamu Noguchi expressed it, ‘Everything is sculpture. Any material, any idea without hindrance borne into space, I consider a sculpture’. It is this widely embracing vision and grasp of sculpture which has proved a great antidote to what Arnott dubbed ‘a brilliant but flawed deflection’.

This focus on sculpture is unsurprising given that I’ve spent the last six weeks at the Nirox Sculpture Park, recouping after a month in hospital where it was not sculpture that detained me but the beeping-pinging sound of the infusion pump to which I was wired. The atonality of the audio is maddening, Dr Paris informed me, suggesting a sleeping pill, but I preferred the ruthless clarity of a sound that failed to comfort, a sound which, like my sick body, had lost its tonal centre and key. Perhaps, this is why we continue to revere Greek sculpture, because it possesses a tonal centre and key?

The problem, however, is that aurally, or visually, we are no longer able to sustain that ideal. Why, because we are distracted by distraction, easily seduced by ‘visual muzak’, devoid of any capacity to still ourselves, live in the moment – because we want to be entertained. This is Martin Herbert’s beef with the art world. We are seduced by ‘gaudy and cartoonish figurative painting; tastefully bulbous sculptures’, an art world and experience in which ‘everything looks like a prop and fades into the background’. This is because art, dangerously, has become an immersive cinematic experience in which we perform the starring role. Having shifted from reverence to narcissism, our perception of art has become increasingly stunted. However, it is against ‘ambient TV’ – Herbert’s scathing interpretation of the contemporary art experience – that we have Nirox, a sculpture park which strives to connect us to Noguchi’s great wonder, that sculpture is ‘anything borne into space’.

The natural environment is key. We are not in an antiseptic white box, the defining condition for experiencing art in the Western world, in fact the entire world. As Elena Fillipovic notes, the white box, or cube, assumed dominance in New York at MoMA in 1929. ‘Windows were vanished so that the semblance of an outside world – daily life, the passage of time, in short, context – disappeared; overhead lights were recessed and emitted a uniform, any-given-moment-in-the-middle-of-the-day glow; noise and clutter were suppressed; a general sobriety reigned’. The devastating impact of this sterile and cauterised vision remains with us. In fact, it has become normative. We’ve even chosen to introduce this sterility into our homes. However, no matter how monitored and controlling this vision is, it cannot shut out the greater grind and mess and confusion that makes up a life.
Laboratories have their purpose for science and for art, but there remains life’s cycle of growth and decay, and the role of art to tell this story.

Chris Soal’s sculpture at Nirox, titled ‘Relic’, is directly inspired by Shelley’s poem ‘Ozymandias’. We see columns, upright, askew, collapsed and broken, their surface corroded, ashen. A testimony to the danger of vanity, it is also, paradoxically, elegiac in the midst of its folly. As a faux ruin, ‘Relic’ reminds us of all we have valued, why it mattered and why it matters no longer. Until very recently, Soal’s sculpture was accompanied by an astonishing work by Richard Forbes, titled ‘Dark Codex’. A blown-up replica of a wasp’s nest, Forbes’ sculpture reminded us that a far greater lesson could be learnt from nature, that biomimicry was not merely a ‘thing’, a fad, but the condition of life. A fathomless perforated black form, it posed a stark contrast to Soal’s ashen columns. Here collapsed civilisation met enduring nature. En route to Norval’s sculpture park in Cape Town, ‘Dark Codex’ will be sorely missed at Nirox where for years it remained in situ, a perfected expression of the dance of manmade form and nature. 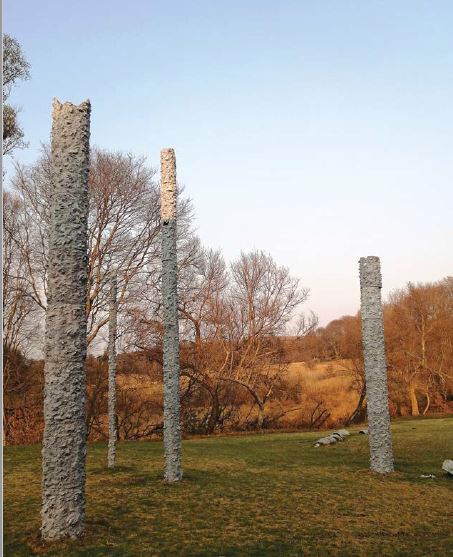 Throughout the Nirox Sculpture Park it is this dance one witnesses. Because the grounds are vast – a mix of rolling green, running stream, and a cluster of ponds – each sculpture assumes its canny place and story, each is an event. Diverse in their expression, form, and material, what each in its own way tells us is that no ideal archetype prevails. Angus Taylor’s stone man may be the most familiar – a realistic sculpture of a human being – however, it is also a giant, a Brobdingnag in a land of Lilliputians. More significantly, it is made from rubble. As
such, it questions the integrity of stone, or Michelangelo’s fantasy of an angel wrought from a block of marble. Therefore, if Taylor’s seated man is one of the very few works at the park which echoes a Greek ideal, it is also a contemplative riposte. Titled ‘Morphic Resonance’, it speaks to an everchanging atomic physicality, despite its colossal presence.

The vast range of works made on site, or trucked in, defy the centrality of ‘Man’. Wessel van Huyssteen’s sculpture ‘Loot House’, made from sticks and trunks – tree debris – may echo a human habitat – the house – but its fragility, and its intended placement above a catchment of poisoned water, speaks not to human ideals but human destruction, and the consequent precarity of our place on this earth. We have, in effect, looted the earth and despoiled it. That said, the meaning of the sculpture remains secondary. It is a precarious tumbledown stick-house we see.

My daughter takes a photograph of Marco Ciafenelli’s sculpture, ‘Cerebral Aspect 110 & 141’, a circular yet geometric form, a rusted orb. Because of the way she has positioned the camera, through its centre we see the letters – USA – which occupy the centre of the word JERUSALEM emblazoned on another sculpture across the pond. If my daughter’s sighting is clever, the work, by Willem Boshoff, is ominous, for what it alludes to is an ageold geopolitical collusion between America and Israel. The statement is deftly clear, to be expected by South Africa’s greatest word artist. That his brilliant retrospective, ‘Word Woes’, is currently on at the newly built Javett Museum in Pretoria, a short drive away, is fitting. Boshoff, like George Orwell, has always understood the lie built into meaning, the duplicity of words. However, this conceit aside, one cannot ignore the monumentality of the work itself. Inspired by gabions, rocks packed in wire cages, used as retaining walls in civil engineering, road building, military applications, and landscaping, Boshoff’s choice reminds us that function and form are indissoluble. But it is the beauty of the structure which, finally, prevails over and about the intellectual conceit or the functionality of the building material which inspired it.

What we learn, on visiting the Nirox Sculpture Park, is how benign humankind’s relationship with nature can be, why art – the very creative force of being – is best expressed in the world which created it, and not in a sterile white box. After all, art’s greatest virtue is its consoling power. It is therapeutic. And what better place to have spent six weeks, after a near death experience, than in the consoling embrace of nature and art? 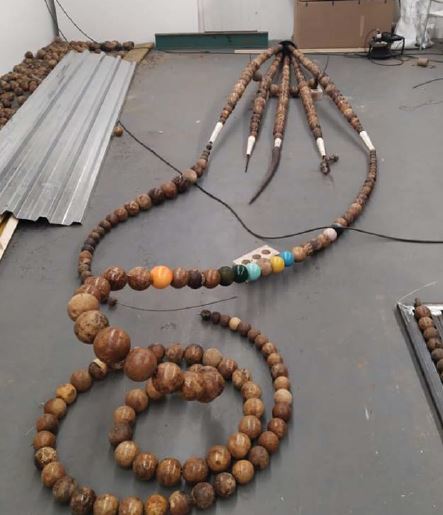 As I write these closing words, Daniel Chimurure, assistant to the Zimbabwean sculptor Tapfuma Gutsa, sends me a photo of a sculpture in progress which is made of steel bars and a dried fruit called ‘matamba’. A single fruit is called ‘damba’. The fruit is the size of a cricket ball, its skin a solid carapace. Fused with steel rods, the sculptures that emerge speak to a deeper fusion of the natural and industrial worlds.

Barring the steel rods, all the other materials are found, says Gutsa, whose sculptures owe much to Arte Povera. Looking at the image that Chimurure has sent to me – a structure made of industrial steel and organic orbs – I realise that if the Nirox Sculpture Park tells us anything, then, surely, it is that nature is our defining and guiding force, that humility and grace are vital ingredients for survival, that ideals are fallible, ‘Man’ never the centre of all things. We live, die, regenerate. And art retains its great purpose because it never loses sight of this fact – despite the blip that is Greek sculpture.