“You have to find it immediately,” my father says. “If I get the eyes right, everything is easy.” What is it that draws us to eyes? Is it their watery convexity?
Is it wetness to which we cling? Viscosity? A pooling? Are the eyes globules, scavenged from an infinite sea? Is it there, in the eyes—their ‘irreducible meaning’— that we teeter, stumble, right ourselves, arrive upon a degree of knowing? 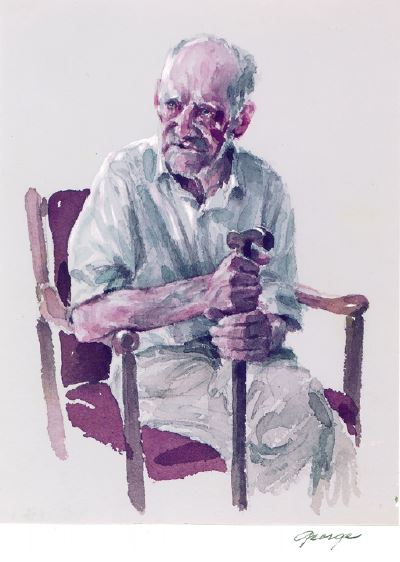 In Eye and Mind (1964), Maurice Merleau-Ponty considers the tug of eyes—the way they unfold a body, open the world through this unfolding. It is eyes, more than hands, that allow for human congruity and mutual understanding. Merleau-Ponty is speaking specifically about painting, what happens when one looks and is looked upon in return. In that moment a scanning occurs, as flat as it is dense. One sees. “We must go back to the working, actual body—not the body as a chunk of space or a bundle of functions but that body which is an intertwining of vision and movement.” The philosopher splices two ineffable conditions to arrive at meaning’s irreducibility. The painter does not paint because they know their subject. It is the unknown that gels. One cannot know a face, not one’s own or any other. “The painter ‘takes his body with him,’ says Valery. Indeed, we cannot imagine how a mind could paint. It is by lending his body to the world that the artist changes the world into paintings.”

My father, Sten Hammar, is eighty-seven. Looking into his rheumy amber eyes I see them racing towards a memory. I have asked him to tell me about his favourite painting. “Uncle George,” he says. The certainty is refreshing. There is not the mildest equivocation. Uncle George it is. My mother, meanwhile, has opened the laptop and finds Uncle George. He was eighty-four when my father painted him, seated in an elegantly solid chair. He holds a walking stick, or it holds him. “Dirty water,” my father murmurs, as I try to figure out how he arrived at that sooty wooden sheen. “A mixture of magenta, Prussian blue, and dirty water.”

There are two water colours of Uncle George. They are painted in haste. “But can you see the layers?” I look. “A layer must dry before the next is applied, nothing is simply transparent.” I look to my father. I can’t recall when I last saw him so animated. The pleasure is irresistible. He recalls the paintbrush he used, broad, made from sable, “Winsor and Newton.” His ability to remember the brand is a gentle riposte to my mother. “See, I don’t have  Alzheimers!” The broadness of the brush allows for the ‘modelling’—“Painting is also sculpture … I work with four colours: magenta, Prussian blue, burnt umber, white paper. It must be rough, the paper. Almost never used black.” The last is a colour for which Manet is revered. But my father—who never cared for severity, who is no intellectual—prefers the coagulation of blood and water. Like Merleau-Ponty, he is a man of the flesh. His bodies, his faces, are both rooted and effervescent. Six-foot-four, his feet are firmly planted; his wide brow abuts the sky.

“You must be very quick to paint in that style,” he says. We are looking at the two portraits of Uncle George. In the one, the head is turned upward. In the other, it is faintly bowed. The one that seems engaged is curiously vacant; the other withdrawn and ruminative. It is there, in the second painting, that the eyes sparkle and dance. “It wasn’t me who held that brush,” my father says. He is looking whimsically at the painting which, we both agree, is the better of the two. The words of Valery and Merleau-Ponty return to me—we take our bodies with us; “we cannot imagine how a mind could paint.”

“He is a spent force,” my father resumes. “Years at sea. Hard drinking … Is it because I knew the man, that this painting came to me so easily?” I don’t think it is me he is speaking to. It is his other self, long gone yet intimately present—a consort and friend, a sweet stranger. In mid-sentence he resumes—“Because it is difficult to find a character. It is not easy to paint a portrait.” What is that character one espies? Is it oneself? Another? A pooling of the two? When can someone say with certainty that they know who they are, what they do, or why? “I can see it” my father simply states, as though listening to my thoughts.

The red wooden chair possesses no ground. It is cast adrift, like the walking stick firmly clasped at the bridge, or the ragged ends of Uncle George’s trousers. The force and pressure is centred in the hands, the knotted forearm and vented throat, the sloped twist of the shoulder and face— unkempt, unconcerned, connected to a thread as airy as the compositional whole. Like the cane, the chair legs are a buttress.
Its cargo? A body, a soul, a mind. If it is difficult to capture ‘character’ then perhaps this is why. Contra T.S. Eliot, one cannot prepare a face for the faces we meet. There is always an elsewhere, another place that we long to be. It is a place that questions our tenancy, the bodies we occupy, the faces we comport.