Mandlenkosi Mavengere is a Zimbabwean artist living in Johannesburg. His experience of flight and  readjustment to a hostile South Africa saddled with a faltering economy, informs his entire oeuvre which addresses the plight of migrants forced to accept demeaning jobs as street vendors and domestic workers despite their superior education and possible qualifications. They struggle to support themselves and their loved ones back home with their pitiful earnings, however, fortunately there is a reverse side to the coin. Mavengere, like many of his exiled compatriots, disdain meagre socialist hand-outs and make capitalism work for them, achieving wealth and status by dint of unremittingly hard work. 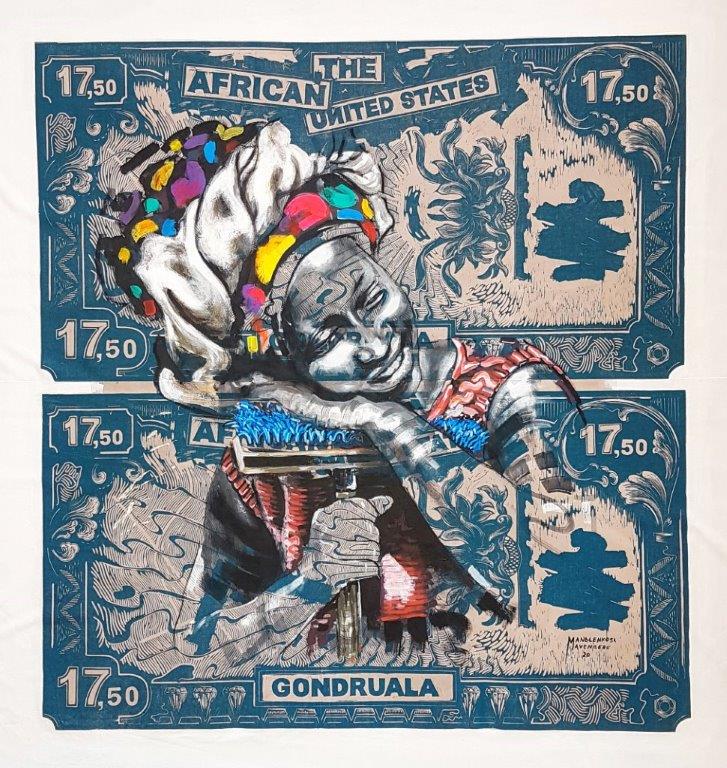 The artist’s squarish canvases – slightly taller than broad – feature flat backgrounds composed of banknotes stacked one on top of the other that embody the dream of affluence. This fictive legal tender – the Gondruala currency – carries printed words that reflect the corruption and strife endemic amongst many countries of our continent. The phrase ‘the African United States’ has a hollow ring, as the continent’s different nations have never formed a harmonious collectivity. Nor do the words ‘promise to pay the bearer’ ring true, particularly in Zimbabwe and South Africa where the currency is notoriously volatile, and the promise of fixed value is constantly broken.

The artist introduces wavy, undulant patterns and explosive designs into the banknotes. These not only suggest the political and economic instability that refugees yearn to escape, they also function as maps in which the sinuous lines trace the escape routes from Zimbabwe.
Poignant images of imperilled black, female, Zimbabwean refugees are floated upon this agitated surface and portrayed in various head and shoulder formats in frontal or pure profile poses which together with strict centrality, symmetry and balance infuse Mavengere’s compositions with a classical architectonic rigour and cohesion. 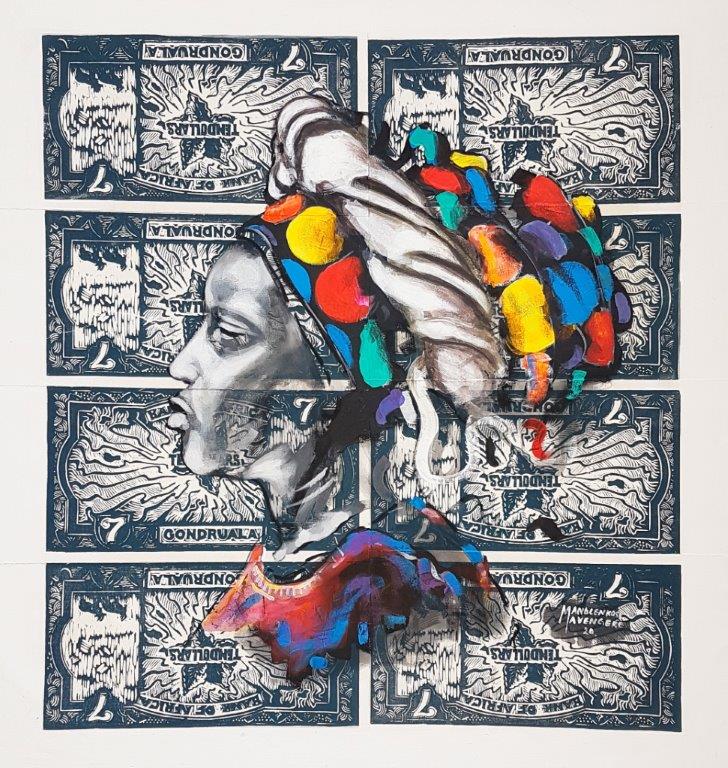 The conflict between figure and ground orchestrates powerful tensions. The plastic modelling of the women lends them a relief, volume and weight entirely absent from the paper money. This contrast makes the women far more real than the banknotes, emphasizing their steely determination to succeed against all odds. Secondly, the migrant women are tightly compressed within the white borders around the banknotes which exert a crushing pressure, affording them scant space in which to manoeuvre. Given that the women long to escape their country of origin, the banknotes become symbolic of their confinement within an environment they both love and loathe, love because it is home, loathe because Zimbabwe is a tyranny which condemns all but the ruling party elite to dire poverty. The women’s enclosure within the banknote implies that money will control their destinies, and that the lack of it will curtail their freedom and deprive them of agency. Will their earnings in their host country provide a better life? Will they dispose of sufficient income to remit to their hungry families back in Zimbabwe? Will they inspire xenophobic attacks? Such grave worries beset these brave but hapless women. 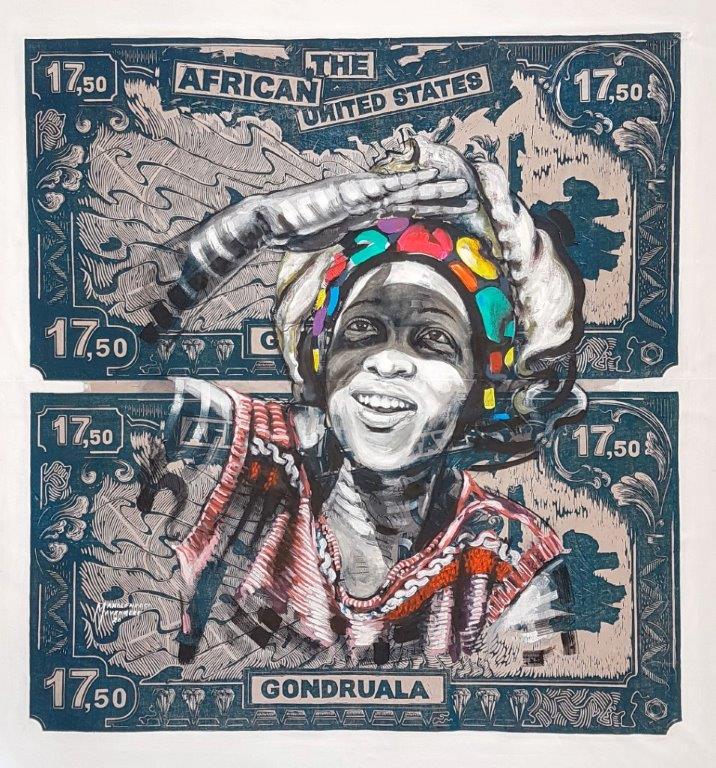 Five of the seven paintings depict the wanderings of the same heroic woman clad in a turban of coloured scarves. In the first painting, she gazes out with hope and eager anticipation. As she moves from country to country – identified by the different banknotes – so she becomes increasingly browbeaten, finally ending up exhausted and careworn in Zimbabwe where her journey commenced. Such is the wretched fate of many refugees throughout the world who end up where they first started – back in their own home country because they could not survive financially or were forcibly repatriated. Mavengere’s corpus possesses an undeniable universal relevance. 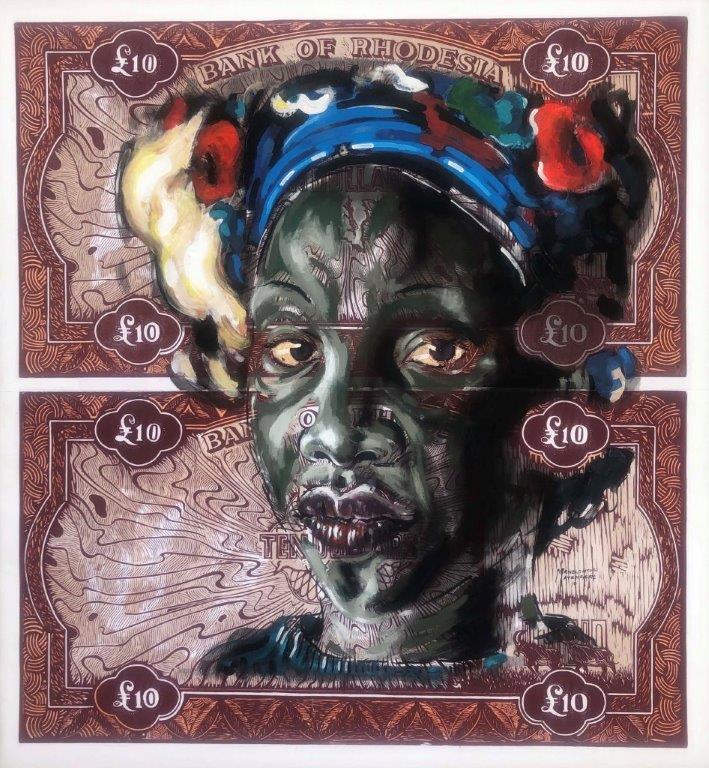 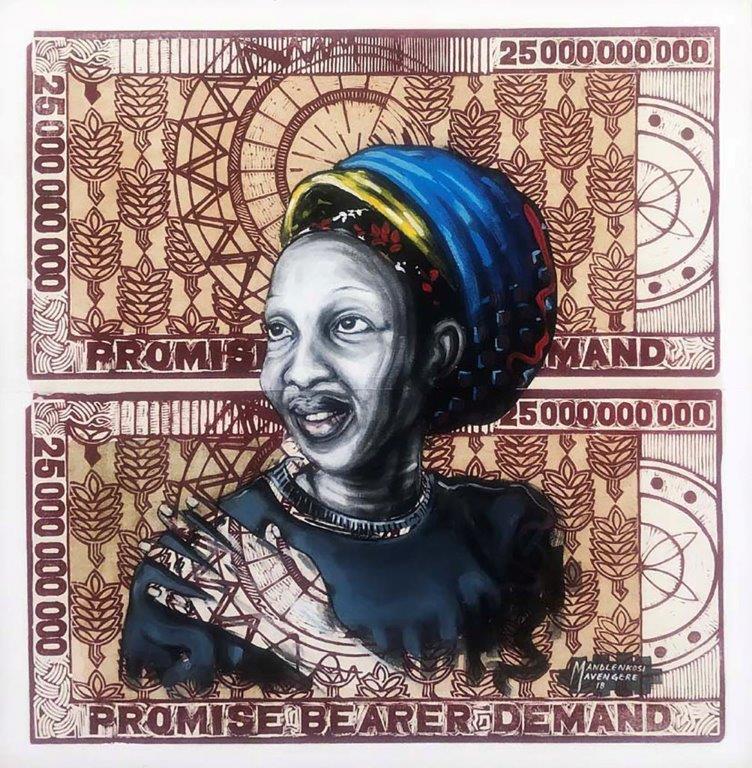 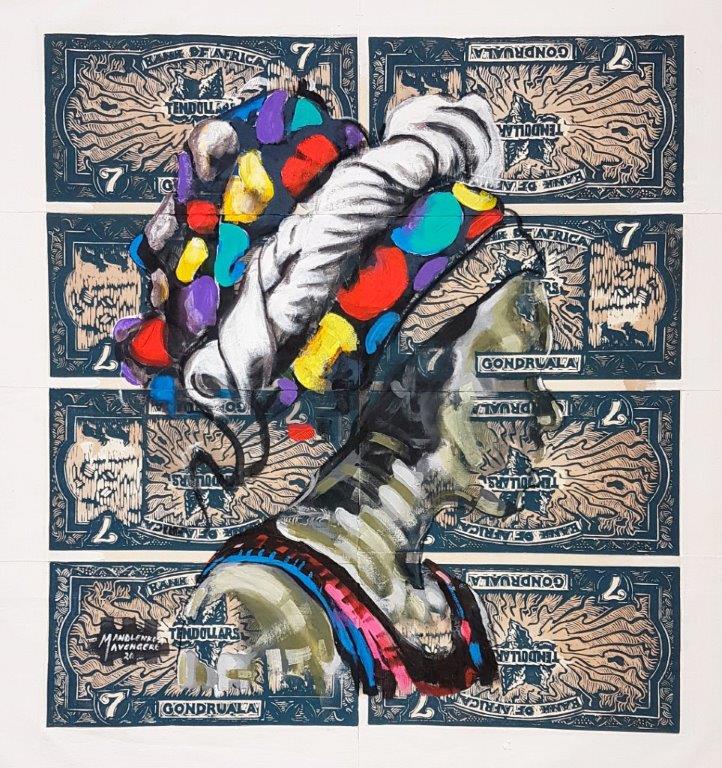