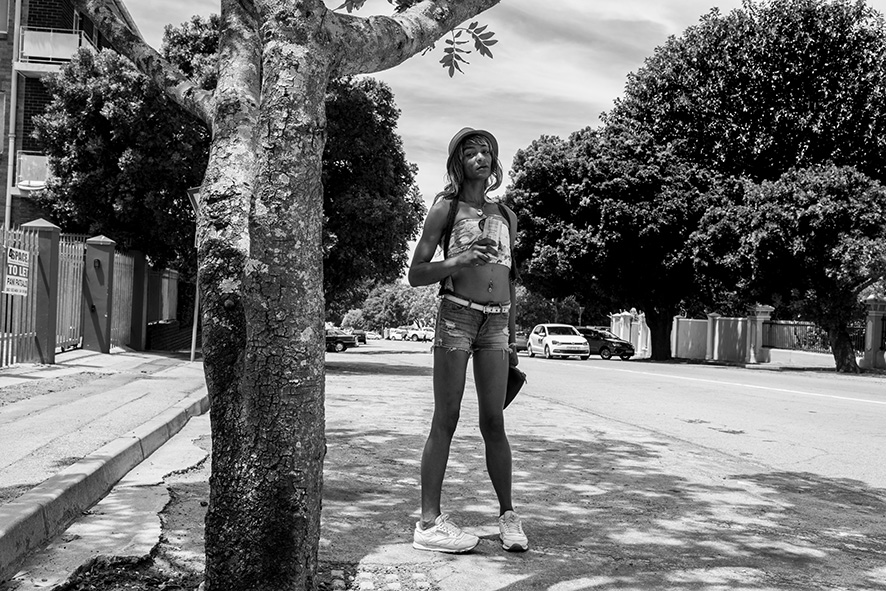 Looking at Margot Muir’s series of photographs on ‘mature women’, the one thing that springs to mind is the inadequacy of words. What is maturity, what is women? Far more separates us than binds us – we are never generic, cannot be typecast, whether according to gender, race, class, caste, or race. Nevertheless, the desire to do so persists. It is easier to categorise, no matter how slippery the venture. And yet, looking at Muir’s photographs of women I am struck by their singularity, their single-mindedness – the realisation that people, irrespective of age, express first and foremost their immeasurable distance from others. Therein lies the poetry of our desolation, therein Kurt Cobain’s great insight – All alone is all we are. This is not said to court misery. On the contrary, it is the unflinching honesty of this insight that compels me. That this is not entirely the case is another matter.
One photograph of Tania Plakonouris is a family portrait shot in a kitchen, in which each figure is uniquely etched, yet, as a family, manifests a greater, if amorphous, totality. Another photograph of Plakonouris is set in a garden, she and her partner caught in a delirious embrace. And yet, despite the erogenous glow the photograph emits, I cannot dispel the fact that joy is precarious too. Another image, of Manuela Cooper, is shot in an achingly austere white bedroom, the subject bundled under white down, the arctic mood broken only by an elegant, effete, sophisticated, youthful portrait of Cooper. A study in doubles, in doubling, Muir’s story reminds us of the discrepant nature of a photographic image, its acquittal of time, untimeliness, thrust apart as it is from time’s continuum. This disconnect, this disarticulation, is more forcefully insisted upon by the subject’s double – the image of herself which is and is not her 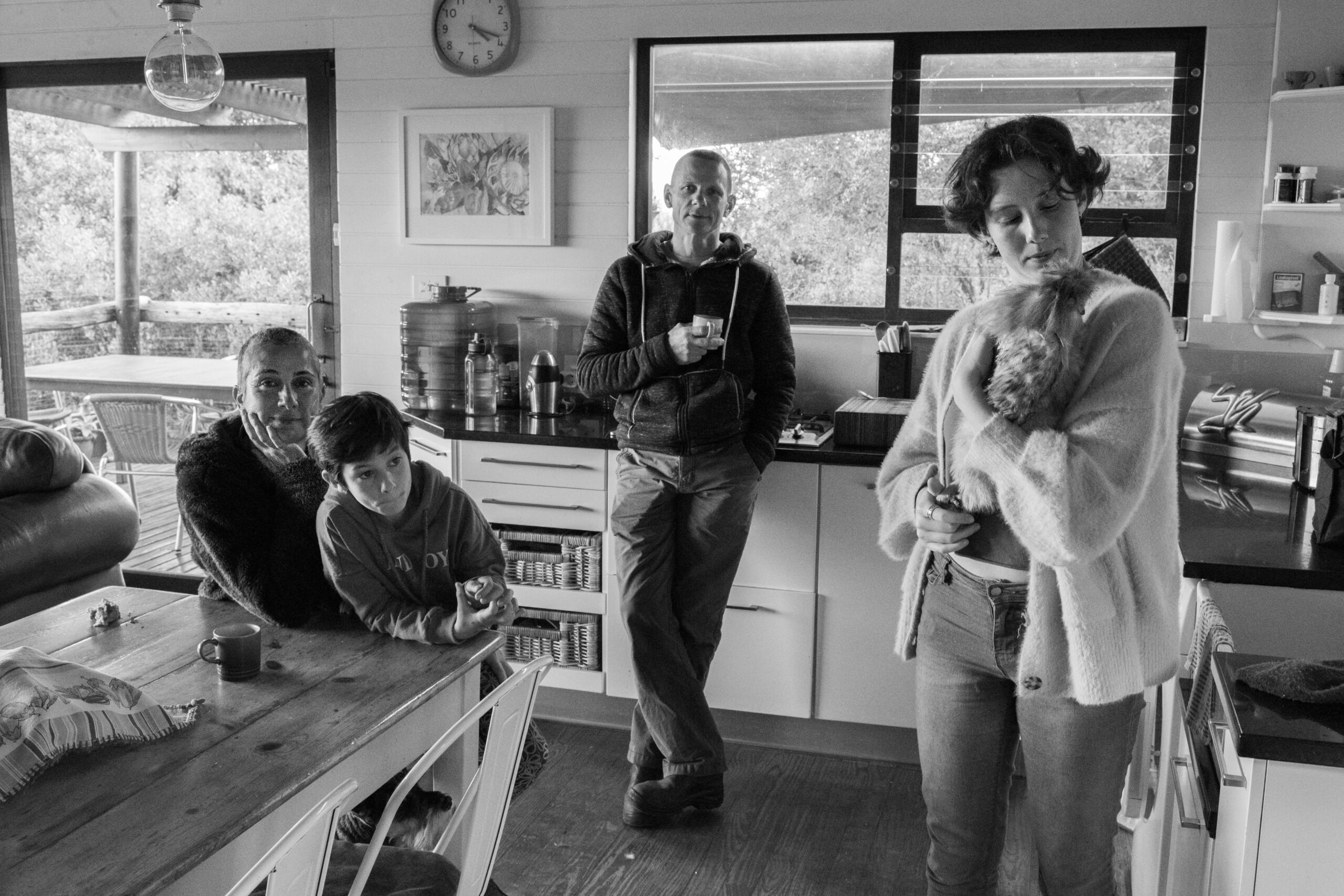 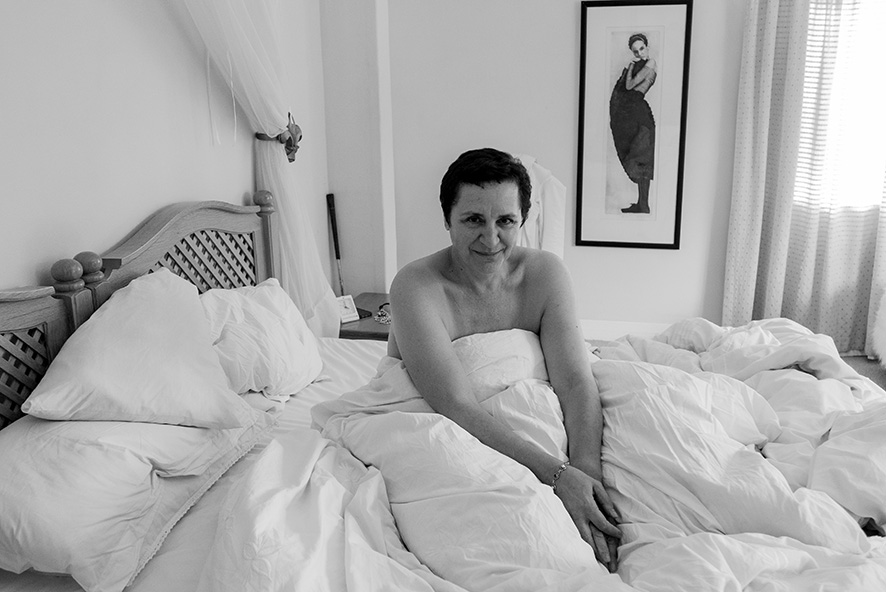 Where do we live? What are we, to ourselves, to others? How do we prepare a face for the faces we meet? These, I think, are the questions which Muir’s photographs of women propose. If there is no technical consistency in the image-making, no tried and tested style, it is because Muir refuses to pre-empt the condition for their taking. The photographs of Lushka and Lydia Mabula are striking in their contract, not only because the one is set on the street – about a street worker – the other in a quaintly retro dining room – and thus a projection of a bourgeois ideal – but because the bodies in the photographs are either over-exposed and raw, or recessive, privatised and closed. If photography is commonly claimed to be invasive, in truth, it cannot see what it casts its eye upon. Photography, technically, is blind. What is revealed occurs despite any technical or artistic claim upon the moment. As Diane Arbus reminds us, ‘A picture is a secret about a secret, the more it tells you the less you know’.
Arbus’s provocation is critical. If photographs fail to yield, resist the meanings we impose upon them, it is because they cannot be subjected to categorisation. This is patently the case in Muir’s series on Mature Women. It is the singularity of the women that matters, or, as Arbus further reminds us, their subjecthood. ‘For me’, says Arbus, ‘the subject of the picture is always more important than the picture’. Of course, it is impossible to separate the two – form and content – and yet, if Arbus insists upon the primacy of the ‘subject’ – by no means subject at all, given the impenetrability of being – it is because what compels her is the mystery of a human life. This is emphatically also the case in Muir’s series. The photograph of Twiggy Smit underpins this view. Smit is recessed, at the furthest point from the camera’s eye, a threshold divides the photographer and subject who stands askance, refusing a full-frontal exposure, their self-presence further deflected by furnishings, objects as ephemeral, as disposable, as a human body. It is not surprising that the root meaning of furnishing is also mobility – mobile – things and people travel, nothing truly is ever settled, hence Smit’s rueful quiddity. 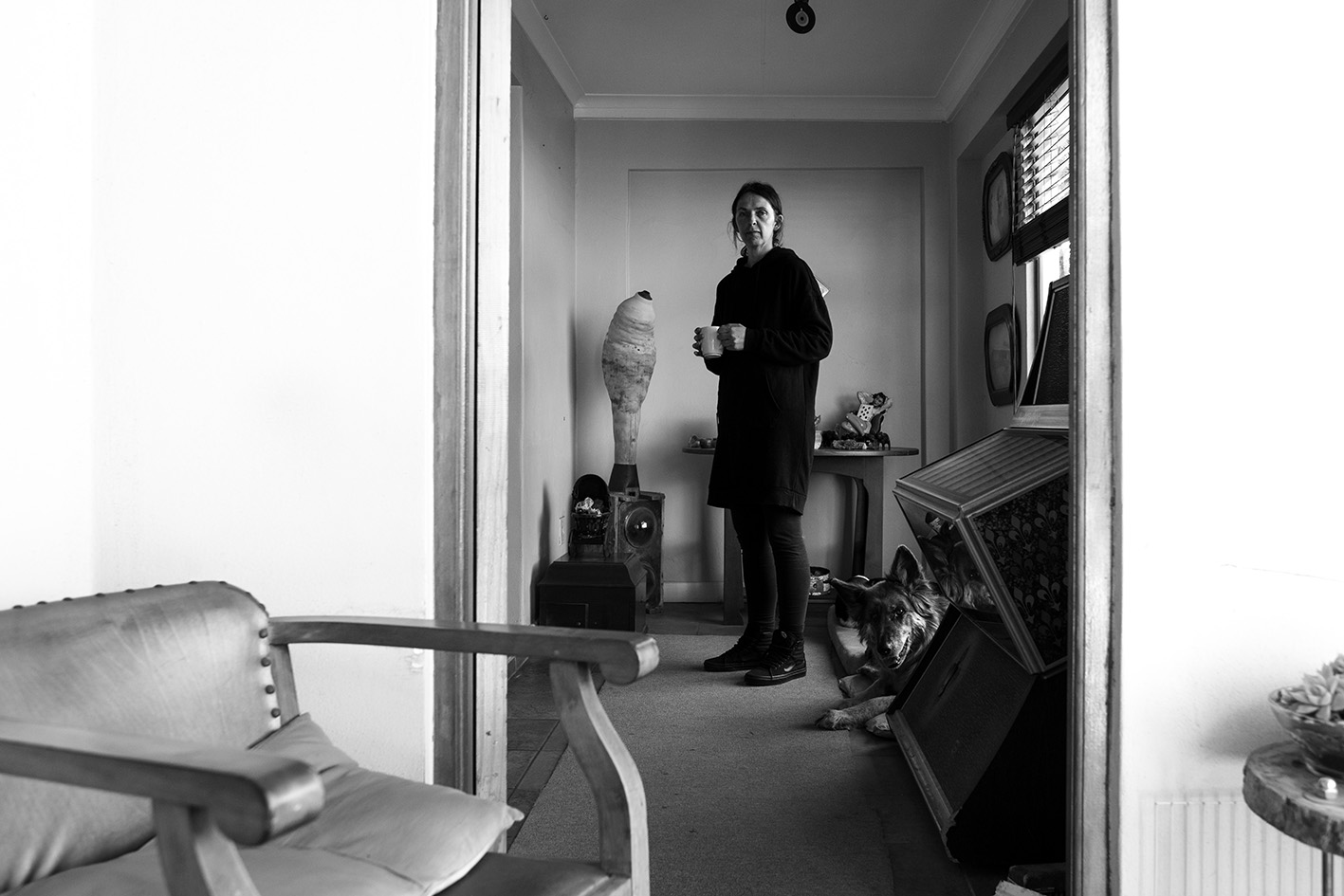 This energy, expressed differently, is also evident in the photograph of Janet Cherry. She is seated on her sofa, before a youthful painting of a woman, caught in sunlight, cut away from a darkened archway. Is the youthful painting a self-portrait? The haughty aquiline physiognomy suggests this, as does the discrepancy in period and age, the portrait of the woman most likely done in the mid-1960s, while the grey-haired figure, a latter-day iteration, we now find on the sofa with an expression as askew as the concertinaed curtain that allows for the flood of light. But who is she, this woman on the sofa? Why are we drawn to her? Is it the way she looks at us, her gaze unflinching, even daring, and yet, ever so particularly perplexed? We see self-command, and the lack of it. The photograph is positioned at a precipice – between light and dark, youth and age, self-knowledge and creeping senescence. In effect, it typifies the condition we dub ‘middle age’, or as I prefer to call it, the ‘middle ages’, given that no figure, in truth, can represent what is a fundamentally obscure category 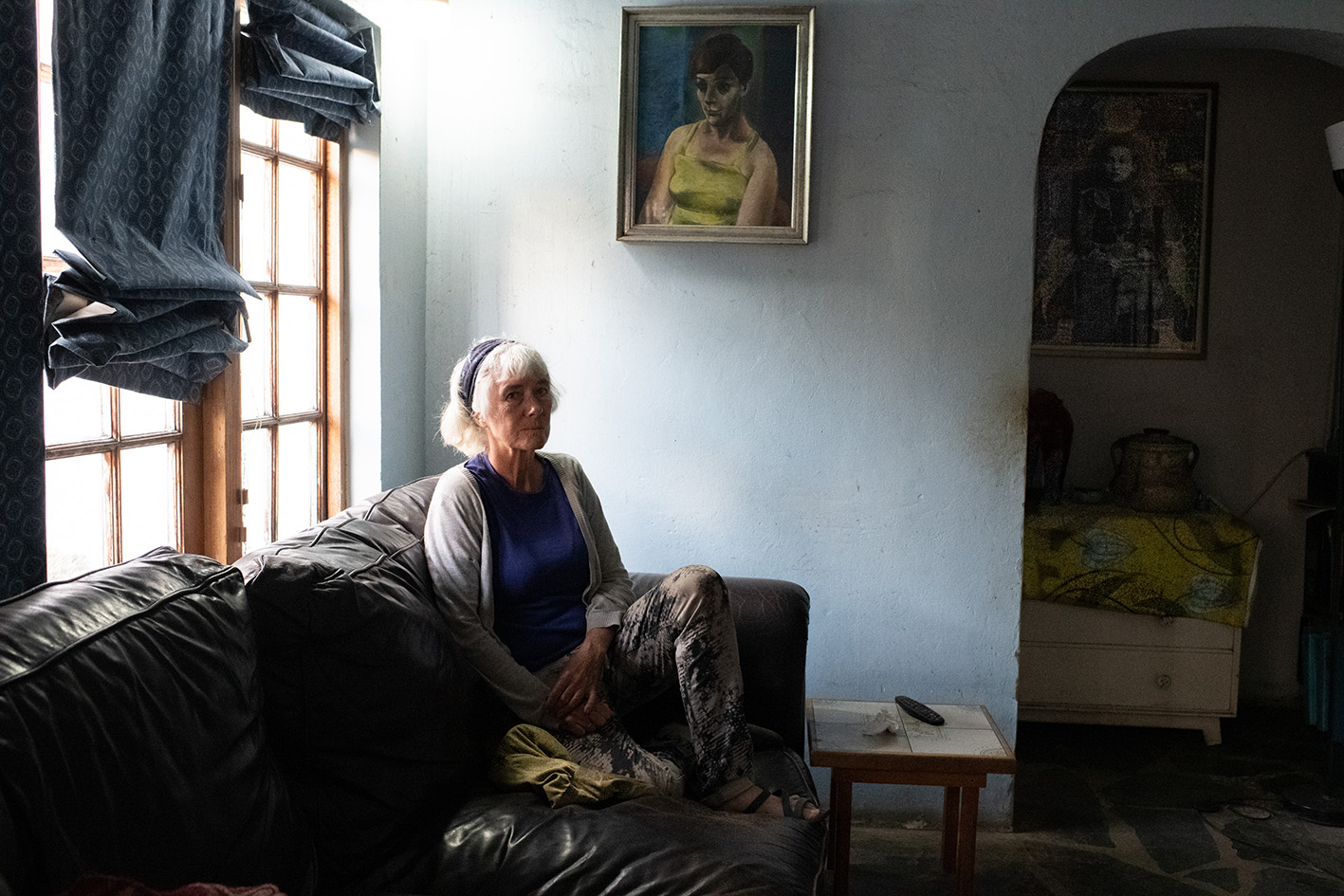 As Blurton Jones, Hawkes and O’Connell declare in the American Journal of Human Biology, ‘Twenty or so vigorous years between the end of reproduction and the onset of significant senescence does require an explanation’. Does it? I, frankly, remain doubtful of any desire to divvy up life, apportion qualities according to age. Muir’s focus – covering a wide range of temperaments and ages – suggest that any explanation is necessarily fraught. Her photograph of Josephine Bonafede, huddled, in fits of laughter, defy any callous judgement of decrepitude. Bonafede possesses a vitality, a glittering sharpness, and, to my mind, an acute grasp of the moment. No hesitation – evident in the image of Janet Cherry – is visible here. Instead, we are invited into a wholly illumined world in which age, finally, matters naught.
But of course, more generally, it does, and terribly so. As Seneca remarks – in On the Shortness of Life – ‘The majority of mortals … complain bitterly of the spitefulness of Nature, because we are born for a brief span of life, because even this space that has been granted to us rushes by so speedily and so swiftly that all save a very few find life at an end just when they are getting ready to live’. This is clearly not the case in Muir’s photograph of Josephine Bonafede. Nevertheless, Seneca’s point holds, especially in this era, obsessive-compulsively preoccupied with the lure and boon of Youth, and what Sarah Bakewell, in How to Live, terms ‘a shared festival of the self’. There is an upside to this media-driven narcissism, however. In an over-exposed mediatised world, we are, according to Theodore Zeldin, able ‘to discover who inhabits the world, one individual at a time’.
The ubiquity of photography certainly indicates this. That portraiture is the most popular current genre in the art world further underscores its omnipresence. We want to look at others, find ourselves through others. Democratic access to the lives of others has metastasised, and no one, anymore, is generic. This is a singular achievement, given that for centuries portraiture remained the domain of the wealthy and powerful. Today, however, we find easy access to the lives of others. Muir’s photographs of women is a case in point. As to whether Muir ascribes to the profligacy of social media is another matter. What one cannot ignore is the palpable presence of her women, and all importantly, their singularity. As to whether these women in their ‘middle ages’ – statistically clocked between ‘the fifth and sixth decades’, according to David Bainbridge – experience the despair described by Seneca is debateable. Can a photograph truly express an existential crisis? Is it the subject who inhabits the crisis, the photographer who frames it, or the viewer who chooses to infer such to be the case?
As Bainbridge notes in his study, Middle Age, ‘human middle age has emerged not as a cultural invention of the last few decades, but instead as a specific biological entity built into us in the hundreds of thousands of years before we planted our first crop. Again and again we have seen that middle age is far more than a vague, gradual decline into senescence. It involves too many changes which are distinctive, abrupt and unique for that.’ It is this last conclusion which resonates most strongly – the fractured and perspectival nature of middle age and not its putative uniformity. It is this distinctiveness, this perspectival fracture and uniqueness,which Muir’s photographs convey. They make no claim upon the world, refuse to speak on behalf of their subjects. Instead, Muir constructs a situation-event-condition in which we, the viewers, intersect with the artist’s subjects. It is there, in that intersection – abrupt, untimely, disarticulated – that we begin to learn not of the universality of being, but its singularity.
In my view, Muir displays no pessimism with regard to age and aging. If she refuses Seneca’s observation, she also refuses Phillip Roth’s. In American Pastoral, Roth’s protagonist notes that ‘What was astonishing to him was how people seemed to run out of their own being, run out of whatever the stuff was that made them into what they were, drained of themselves, turn into the sort of people they would once have felt sorry for’. Muir’s position couldn’t be further removed from Roth’s cynicism. Her portrait of Josephine Bonafede is her clearest counter to this fearful and morbid view of life. But one can look at any photograph in this series and realise that age, while inhibiting, is never an obstacle. Consider that of Vanessa Levenstein in her discreet moment of grace and prayer on a Friday evening celebrating Shabat and, alongside, Melissa Haiden’s sheer beauty and tentative hands, the still life of a simple, perfectly-formed orange fruit on a plate behind her. Or consider the photograph of Cleone Cull, her hands idle, gaze penetrating, surrounded by found objects, peculiarly refined, removed from the tidal wave of bric-a-brac, the whole flooded with a roseate light as quaint as the setting. But it is the woman at the epicentre who commands our attention, aglitter in gold and silver. I think that Margot Muir and David Bainbridge would concur. His thesis? ‘That human mid-life is a positive, not a negative thing. It is flux, not crisis … a liberation – evolutionarily, culturally and personally’.

The series will be on exhibition in Gqeberha (Port Elizabeth) at the GFI Art gallery from
27 July – 5 September 2022, spanning Women’s month, curated by Margot Muir, in a group show with the late Mark Morrison and John Lombardo’s artwork. 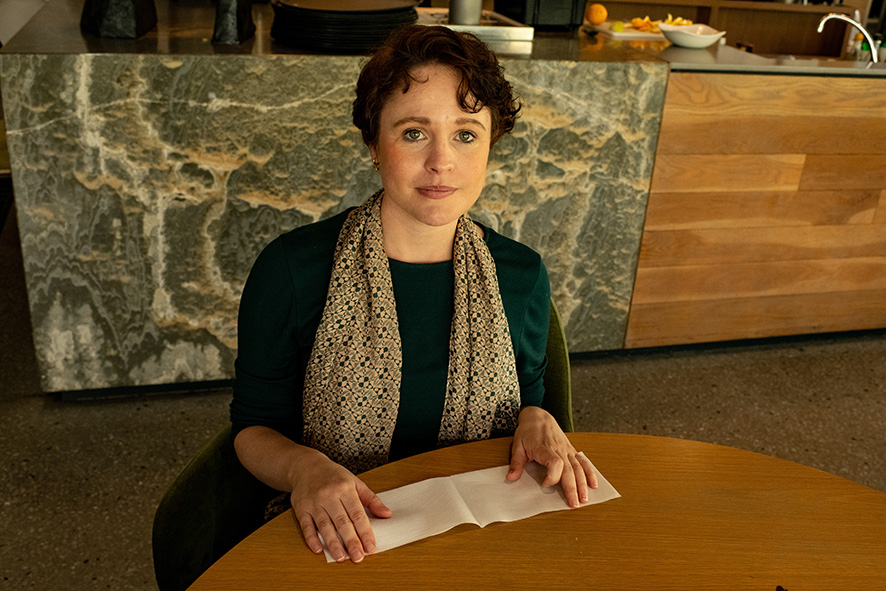 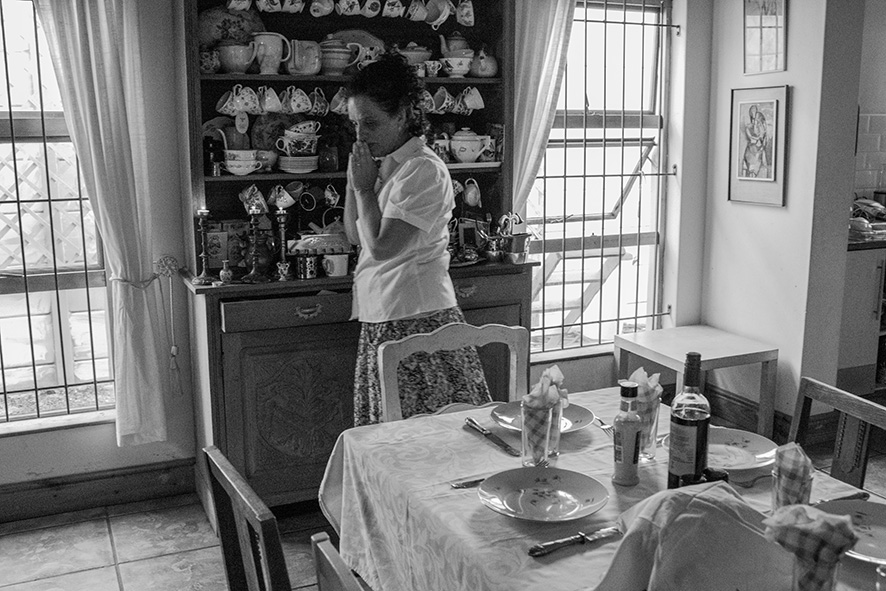 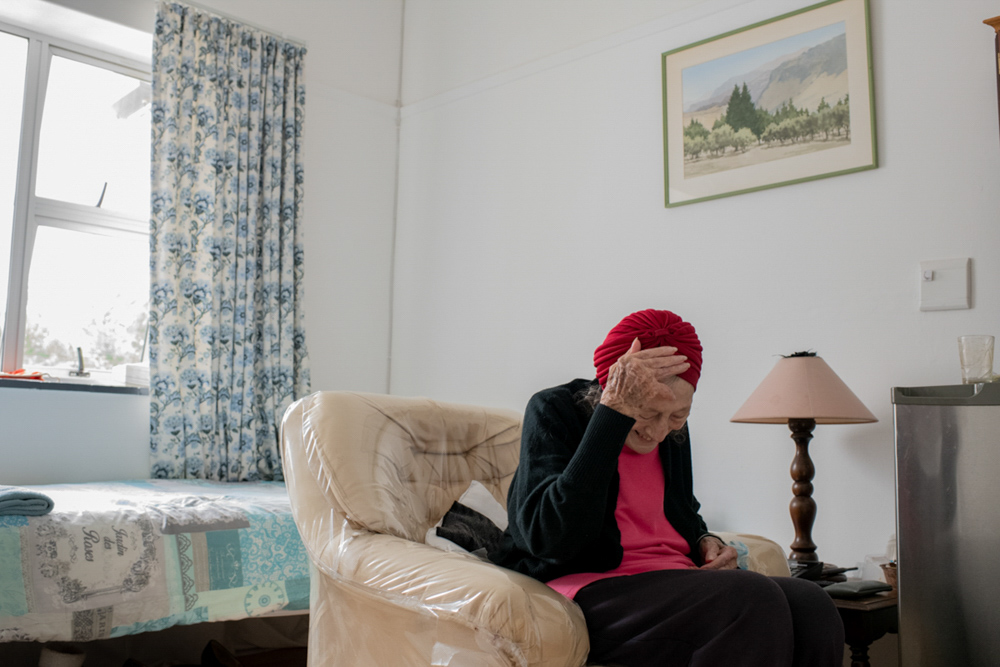