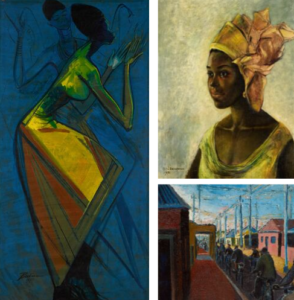 September 2019, London: This October, an enchanting rediscovered portrait by pioneering Nigerian master Ben Enwonwu will star in Sotheby’s sale of Modern and Contemporary African Art in London. A portrait of the artist’s close friend, Christine will appear at auction for the first time with an estimate of £100,000-150,000, having remained largely unseen in the sitter’s family home since its creation in 1971. It will be presented to the public as part of the pre-sale exhibition in London from 11-15 October (34-35 New Bond Street, W1S 2RT).

Lost to historical record until now, Christine is a radiant portrayal of Christine Elizabeth Davis – an American hair stylist of West African descent, who was a close friend of the artist, and the present owner’s late step-mother. Although cherished by Christine’s family for its sentimental value, they were unaware of the supreme importance of the artist or the painting, until a chance ‘googling’ of the work led the family to Sotheby’s free Online Estimate Platform.

Christine will star alongside a revered work by Enwonwu’s contemporary Gerard Sekoto, with whom he shared a studio in Paris in 1946. Largely responsible for the establishment of African Modernism, the pair are often considered among the most important artists of the 20th century. Sekoto’s relocation to Sophiatown, Johannesberg, in 1939, marked the beginning of his eminent career. His work sought to document the dramatic social change of the time, and the harsh socio-economic reality of life in black urban areas in the years preceding the apartheid. A highlight of the forthcoming sale, Cyclists in Sophiatown shows a line of men commuting to work by bicycle, leaving the township under a transient early morning sun. The prohibitive costs of car ownership and the lack of public transport meant cycling was the default, and therefore a low-status, mode of transport for the poor and oppressed black working-class South Africans.

Further highlights in the sale include works by El Anatsui and Ibrahim Mahama, both of whom represented Ghana in its prominent debut pavilion at the Venice Biennale earlier this year, alongside William Kentridge, Chéri Samba, Boris Nzebo, Abdoulayer Aboudia and Monsengwo “Moke” Kejwamfi. Speaking about the sale, Hannah O’Leary, Sotheby’s Head of Modern and Contemporary African Art said:

‘This season’s sale is very special, not only due to the number and variety of works on offer, but also because of the wonderful stories and supreme historical importance which accompanies them. Opening with the earliest work by Albert Lubaki to Hassan el Glaoui, Salah Elmur and Ben Enwonwu whose mesmeric portrait of Christine has blown us away. It’s an incandescent and truly masterful rendering of the sitter’s late stepmother and to be able to show this portrait side-by-side with Gerard Sekoto’s ‘Cyclists in Sophiatown’ is a real honour. They will appear alongside rising masters of the Contemporary scene, including two works by Eddy Kamuanga Illunga, who has risen to new heights in recent years, and pioneering female artists, Maïmouna Guerresi and Seyni Awa Camara. Since establishing these sales at Sotheby’s in 2017, we’ve achieved 60 new records for artists hailing from across the continent, spanning a kaleidoscope of cultures and themes. It’s an incredibly exciting time, and as African artists surge to the forefront of public and private collections across the globe, we can only hope to raise the bar even higher this season’.

Spanning close to 60 years, Enwonwu’s artistic career followed one of the most important periods of Modern Nigerian history; the journey from a British colony to a newly independent African nation on 1 October 1960. Ben Enwonwu MBE became an advocate for a new Nigerian national culture and a pioneer of African Modernism. By his passing in 1994, the painter and sculptor was already recognised among the most important and revered African artists of the 20th century. 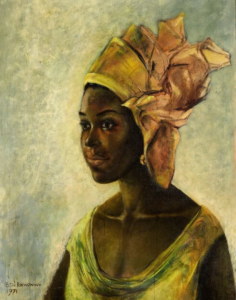 Enwonwu produced many of his most famous works in the years following the Nigerian Civil War (1967-1970) including all three portraits of the Nigerian Princess Adetutu ‘Tutu’ Ademiluyi; known as ‘The Nigerian Mona Lisa’ after it was similarly rediscovered and sold at auction last year, achieving a new record for work by a male Nigerian artist. Despite its earlier date, this portrait of Christine from 1971 is strikingly similar in composition to Tutu, and a clear precursor.

Just as Tutu was rediscovered in a London apartment, Christine has hung in the family home in Texas for over 40 years. Born in New York, Christine moved to Ghana in her early twenties to reside with her stepfather, before moving to Lagos with her missionary husband, Elvis Davis. Here the pair developed a great friendship with Enwonwu, often socialising in the same circles. The portrait is a product of this friendship and was commissioned by Elvis as a gift to Christine. It was painted in under a week – a surprisingly short time as Christine was able to stay motionless for as long as the artist required. She is shown here wearing a beautifully tied headscarf called ‘gele’, which signifies her married status and a deep appreciation and respect for the social norms of the locals. Shortly after Christine was produced, the family relocated to Texas, USA in 1978. This was due to the large civil unrest during the Nigerian military coups of 1975 and 1976. 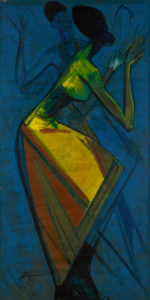 Enwonwu first embarked on his Africa Dances series in London during the 1940s, and in reaction to Geoffrey Gorer’s 1935 book of the same name published in 1935 – a critique of colonial rule and its impact on traditional life in Africa. In the series, Enwonwu illustrates his own views on the state of modern Nigerian culture at the time, using symbolic imagery in scenes of dance, and ritual performance from his Onitsha-Igbo heritage.

By 1970, the series had taken on another dimension in Enwonwu’s quest to represent modern Nigeria, after gaining independence a decade before, and with it, the country was in search of a new post-colonial identity.

Enwonwu advocated a new modern Nigerian national culture, and it was in this context that he created the present lot, illustrating his views on modernity and tradition. The woman in the foreground represents the new Nigeria, with her modern hairstyle and dress, she leans forward, performing a delicate dance.

Widely recognised as the pioneer of black South African art, Gerard Sekoto’s societal depictions underline the economic hardship, social tensions and racial injustice which faced millions of civilians in the years preceding the formal implementation of the apartheid. 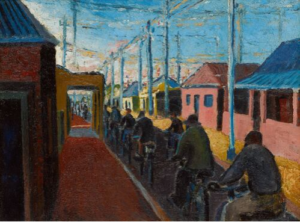 Moving from city to city in South Africa, his childhood experiences came to provide him with a unique perspectives on the people of South Africa and primarily the impoverished black population, which would later provide great inspiration for his work.
Sekoto resided in Johannesburg’s Sophiatown in 1939, and it is here that the artist executed Cyclists in Sophiatown – a highlight of this sale. The evocative work is a notable precursor to Sekoto’s seminal, most charged and political piece, Song of the Pick, in its astute composition and use of light and colour to convey a sharp political message.
Painted in the same year, Sekoto’s work, Yellow houses – a Street in Sophiatown, can be considered a pendant piece for Cyclists in Sophiatown. The former was famously purchased by Johannesburg Art Gallery as the first work by a black artist in their collection – and the only one for the next 32 years. 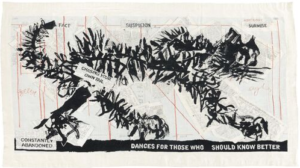 Kentridge is a pioneering draftsman, performer, and filmmaker, celebrated for his animated drawings, which examine the years before and after the apartheid.
Scribble Cat is a quintessential example from William Kentridge’s series of tapestries in which shadowy figures are conjured from ripped construction paper and collaged onto backgrounds composed of nineteenth-century atlas maps and books. Based on the blue cat in his animated film, Stereoscope from 1999, Kentridge initially painted the feline on canvas which then served as a moquette for the tapestry. Both the painting and drawing were included in the Other Faces exhibition at Goodman Gallery, Johannesburg in 2011.
Kentridge has been the subject of numerous exhibitions at venues including MoMA, Jeu de Paume in Paris, Albertina Museum in Vienna, and the San Francisco Museum of Modern Art. His work has also been exhibited in major international shows such as Documenta 11 (2002), Documenta 10 (1997), and the Venice Biennale in 2005, 1999, and 1993.

Jacob Hendrik Pierneef is widely-revered for not only depicting, but also defining, the South African landscape. Monumental in scale and rarely seen outside museum and institutional collections, Summer Rain in the Bushveld is a quintessential work from the artist’s oeuvre. Executed in the earlier years of his career, the painting remains true to the bushveld that would have stood before Pierneef – a contrast to the highly-stylised works produced a decade later. 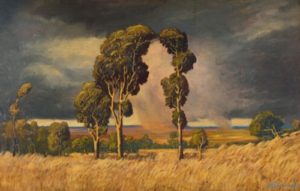 Summer Rain in the Bushveld dates to a crucial point in both the artist’s career and the history of South Africa. In 1918, Pierneef left his job at the State Library to pursue his dream of becoming a full-time artist. Alongside this personal journey, the years following the end of the Second Boer War and the Union of South Africa in 1910 saw a period of nation-building and the creation of a national identity for South Africa. Pierneef became actively involved in this movement, reflected in his devotion to depicting the lands surrounding him. The South African terrain became central to the ideology of this emerging nation, claimed both physically and artistically as ‘home’. This dream of an idealised landscape was shared by many South Africans, who came to see their country through Pierneef’s eyes.

Amalgamating both traditional and ‘popular culture’ styles, Illunga’s oeuvre reflects both the rapid modernisation of Kinshasa, Africa’s third largest city and the artist’s home town, and the resulting uncertain sustainability of the broader heritage and daily rituals of the Mangbetu people – whom form the subject of this work. 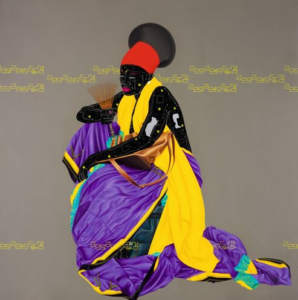 Understanding the present through the past is central to Illunga’s practice. The classical poses and rich drapery of the artist’s monumental figurative paintings are reminiscent of European Old Masters. Yet, the rubber flip-flops and vibrant swathes of fabrics capture Mangbetu’s craft and heritage. What’s more, electronic circuitry, the artists trademark patterning, tattoos the figures bare skin, signalling to the digital twenty-first century. This style of painting originated early in the artist’s career, after learning that the Democratic Republic of Congo is one of the world’s biggest producers of coltan, an ore strenuously mined by hand that contains tantalum – a key metal for the electronics industry. Shocked by the growing number of South African villages destroyed to exploit these mineral’s, Illunga’s microchipped figures symbolise the exploitation of both his country and its people, and the harsh reality of globalisation.
The sale of Influence follows the record-breaking price for the artist’s Palm which sold for £81,250 in our London sales room earlier this year. 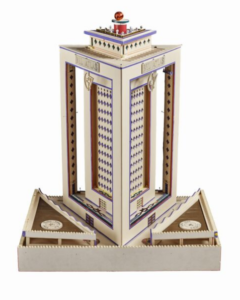 institution’s first-ever solo show of a black African artist.
Working in the Democratic Republic of Congo during a period of tremendous change – between the colonial and post-colonial periods – Kingelez used his work to envision a forward-thinking, peaceful and prosperous future, untainted by economic disparity. Echoing the physicality of the industrialised city that he grew up in, the artist’s ‘extreme maquettes’, reflect the impact of Space Race-influenced Soviet architecture on a newly post-colonial Africa as well as the Art Deco buildings of colonial times.
Kingelez has appeared in numerous high-profile exhibitions in venues including the Centre Pompidou, Paris, and The Whitney Museum of American Art. In 2002, he appeared in both Documenta XI in Kassel and the São Paulo biennial; and he participated in the Johannesburg Biennial in 1997.