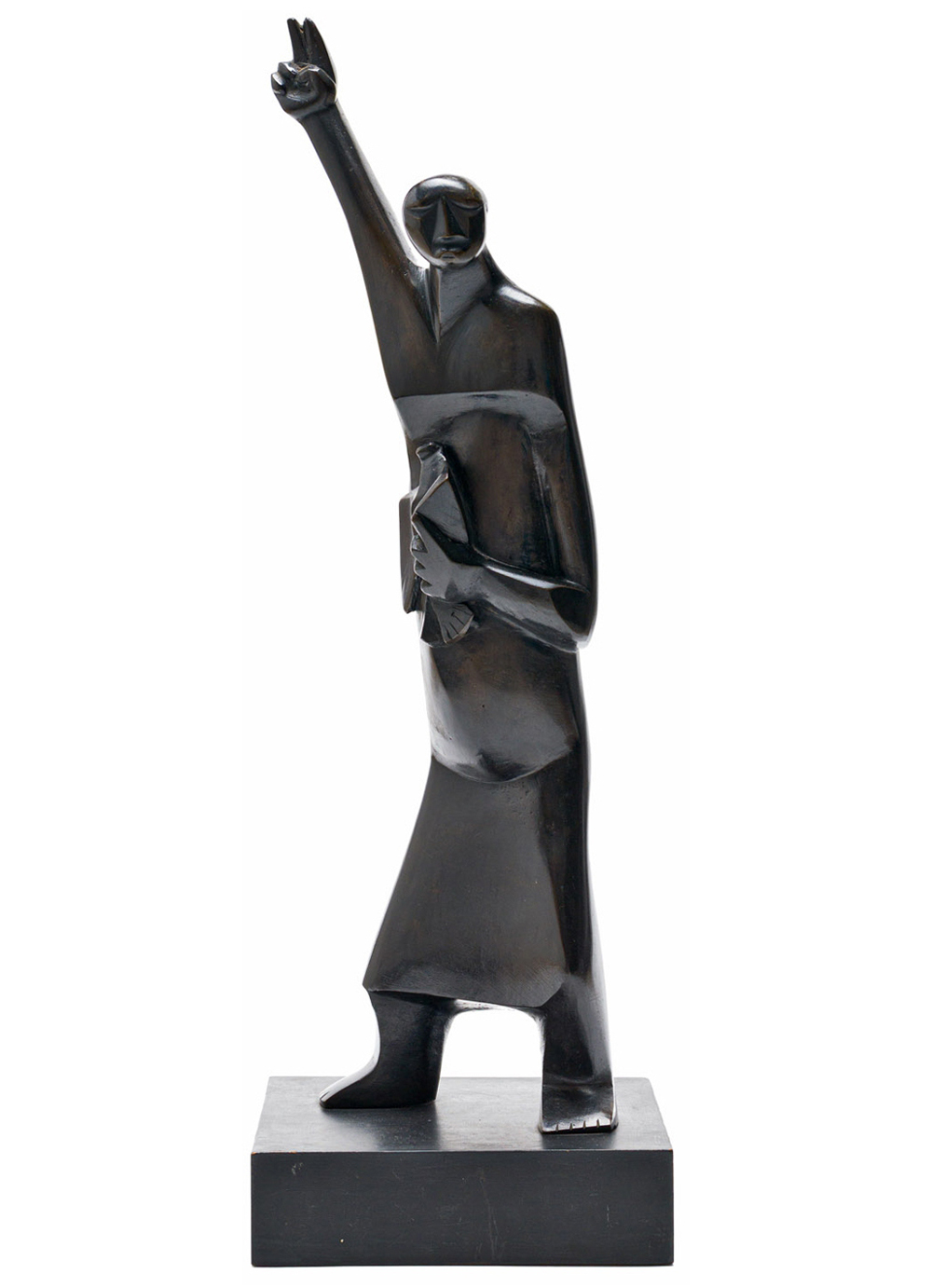 The sale, which grossed R60 million, commenced with a well-received session comprised of a single-owner collection of fine wines from Bordeaux, Burgundy, Alsace and Champagne, and was buoyed by strong demand in the ensuing sessions for the diverse catalogue of modern, post-war and contemporary art.

“I was encouraged by both the strong turnout of bidders to our marquee sale and their willingness to compete for target lots,” said Strauss & Co’s chairperson Frank Kilbourn, who viewed the sale remotely from Cape Town. “Our hybrid model of live-online trading continues to attract new buyers, some in far-off locations. The diversified spread of buyers and depth of interest culminated in deserved world records for Keith Alexander and Sydney Kumalo. It also resulted in fierce competition for works by Lynn Chadwick, Dumile Feni, Robert Hodgins and Vladimir Tretchikoff. Of the successful bidders in this sale, nearly 15% were new customers. This is hugely pleasing.”

The story of this upbeat sale is summarised in events from the concluding session, held of Tuesday, 18 May. Load shedding in Johannesburg saw auctioneer and Strauss & Co senior art specialist Alastair Meredith briefly plunged into darkness as he was taking the first lot. After a brief pause, as backup generators kicked in, bidding resumed. The pace of the session was brisk.

A number of online bidders chased after a rare pre-exile bronze cast of Dumile Feni’s Anguished Woman, which sold for R455 200. Three high-profile bidders pursued the ensuing lot, Sydney Kumalo’s bronze figure Saint Francis. A powerful amalgam of African and Christian symbolism that was first exhibited by dealer Egon Guenther in 1962, Kumalo’s work was eventually knocked down for R3.75 million, a world record price for this important post-war sculptor. Interest in British sculptor Lynn Chadwick, a contemporary of Kumalo, was also pronounced: a maquette of his Walking Couple sold well above estimate for R2.5 million.

Keith Alexander’s large oil The Distinguished Guest, a haunting night scene depicting a figure on the veranda of an abandoned rural home, generated the session’s most competitive bidding. After a raft of online bids, this late work from 1994 sold for R2.1 million, a new world record. Three more lots by Alexander followed, all of them finding buyers.

“Our decision to spotlight two prominent realist painters, Keith Alexander and John Meyer, in the final session was, I believe, vindicated,” says Susie Goodman, an executive director at Strauss & Co. “There has been a strong appetite for Keith Alexander’s photo-surrealist work since he first appeared on a Strauss & Co auction in 2012. His prices have steadily grown too. In 2020 we established a new world record for Alexander when we sold a 1988 landscape for R967 300. The new benchmark price established in our most recent sale is a strong affirmation of this enigmatic artist.”

Pierneef’s rare oil on board composition Study for Klipriviersberg, Alberton, one of only a few oil studies by the artist known to exist that directly relate to his landmark Johannesburg Station Panels commission of 1929-32, sold for R2.04 million. All six Pierneef lots in this sale found buyers, including a striking dusk scene titled Kimberley Sunset from the Late Toy Mostert Collection, sold for R682 800. The Mostert Collection included a work by Keith Alexander.

Individual lots by Robert Hodgins, William Kentridge and Penny Siopis, pioneering figures in the contemporary art segment, achieved strong prices, as did works by younger contemporary artists such as Pieter Hugo, Mustafa Maluka and Chris Soal. Consulting Room, a striking Hodgins figure composition completed in 2007, was the top-selling contemporary lot, selling for R1.4 million. Born in 1994, Chris Soal was among the youngest artists with works in the sale. His wall-hung sculpture The Heart Reaching beyond the Mind, a fur-like form made from toothpicks, sold for R250 360.

While paintings once again proved their strong draw for collectors, sculpture held its own in this sale. The strong showing by Kumalo, Chadwick and Soal was complemented by good prices achieved for works by Angus Taylor and Dylan Lewis. Two early Lewis cat bronzes from 1996, both consigned by the Afrox Corporate Art Collection, found buyers: Seated Leopard sold for R910 400 and Standing Leopard went for R853 500.

A sealed case of the 2000 Lafite Rothschild Pauillac, the celebrated Bordeaux blend known for its elegance and purity, topped the opening fine-wine session when it sold for R147 940. This vaunted French wine formed part of an impressive 99-lot collection of fine wines from Bordeaux, Burgundy, Alsace and Champagne offered by a single Cape Town collector. The session concluded with 92 lots sold and earned R2.1 million. The lot sell-through rate for this session was 93%, with the overall sale achieving a healthy 75% lot sell-through rate.

Strauss & Co’s next sale will be held exclusively online and commences on Monday, 31 May. It will include a comprehensive catalogue of modern, post-war and contemporary art, decorative arts and jewellery and a themed selection from Stellenbosch’s best wine producers.