Mandlenkosi Mavengere has the ability to capture the essence of hope and endurance in his family and the community of Africa, through his beautifully detailed artworks. They reflect on socioeconomic migration and the shift of personal identity, whilst exploring the journey of wealth seeking from within.
His upcoming exhibition ‘On Golden Soil’ is a study of the people that choose to migrate and the ambitions that drive them to do it. Individuals leave their familiar homes and territories, searching for better fortunes in larger cities and foreign countries. Often, many of them temporarily place their dreams on hold to support themselves in the immediate future and adopt any role that meets this need. Through these artworks, Mavengere narrates tales of his much-beloved ‘anchor’ – his grandfather, himself, and his fellow migrants. He utilises the Gondruala’ – a fictitious currency used as a backdrop in his artworks; this constantly reminds the viewer of the driving force of wealth and what it represents to Mavengere and his fellow fortune seekers. 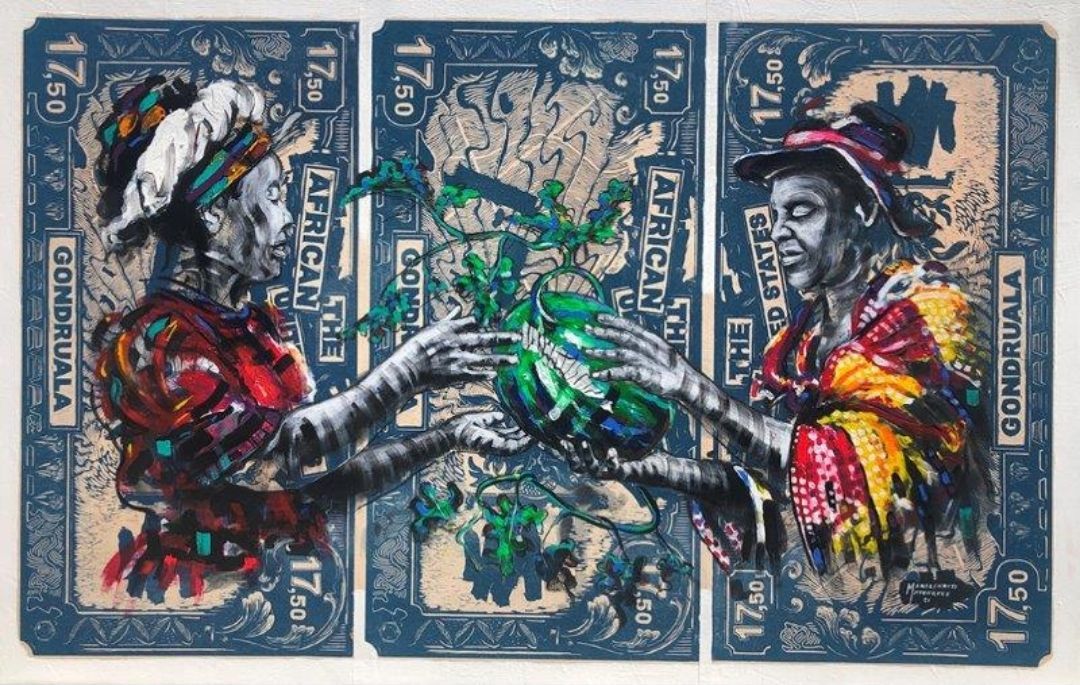 Mavengere’s family originates from Matabele Land, Zimbabwe. Like his grandfather, he travelled across the border to Johannesburg, an African city that represents rich opportunities. He began at the Artist Proof Studio, learning and nurturing his passionate precision for transforming concepts into highly descriptive imagery. After curating an exclusive exhibition for Strauss and Co. Mavengere joined the mentorship programme under the William Kentridge Studio, where he further developed his unique techniques with etchings and prominent linocut banknotes, exploring themes true to his Migration Concept. Including other fairs and collections, Mavengere’s artworks have been featured at the 2019 Belgium and Paris Art Fairs and at the Johannesburg Stock Exchange and Minerals Council South Africa. He currently creates artworks at his studio at Constitution Hill in Johannesburg.

“My banknote artworks are a framework within which one can observe the issues of migration with relevance to the socio-economic divergence of one identity and the convergence of another”, says Mavengere. The permeating contours on the banknotes act as maps in which lines delineate the migration routes from other African countries. The currency of the ‘Gondruala’, represents the hope and potential for the resource-rich continent of Africa, whilst the banknotes divulge stories of both success and great loss.

Mavengere’s pieces overflow with rich imagery, alluding to key concepts and themes through the migration journey. The classic Singer sewing machine embodies the rediscovered passion for tailoring that Mavengere’s grandfather felt upon his return to Zimbabwe. His grandfather was a formidable tailor and left Bulawayo in search of a grander future. On his journey into a neighbouring country, he found himself tending to gardening and construction jobs in Johannesburg. Today he is reunited with his country and with his real passions of creating garments and farming.

Whilst you move through this collection, you will discover elegant Zimbabwean women with magnificent headscarves, which paint stories of the identities that the migrants leave behind when they cross over the national border. These headwear pieces crown the individual with the stereotypes placed on them in a foreign land. A loss of identity which has a great effect on many migrants, most significantly, a disconnection to their roots.

Lloyd Pollack, esteemed South African art writer, took a personal journey through Mavengere’s concepts that highlight the greater discussion around the migration concept between nations –“The phrase ‘the African United States’ has a hollow ring, as the continent’s different nations have never formed a harmonious collective. Nor do the words ‘promise to pay the bearer’ ring true, particularly in Zimbabwe and South Africa where the currency is notoriously volatile, and the promise of fixed value is constantly broken”. Pollack closes with, “Mavengere’s corpus possesses an undeniable universal relevance.”

Christopher Moller, director of the Christopher Moller Gallery, leaves us with his thoughts on the exhibition, “Mandlenkosi Mavengere’s exhibition; ‘On Golden Soil’, explores his cultural routes in Matabele Land, Zimbabwe. Mavengere and his family were forced to move to South Africa because of the economic hardship brought on by the Zimbabwean government’s socialist/populist principles and action against the masses, combined with rampant corruption and greed.”

Immigration is a global phenomenon that countries and entire continents can relate to. Throughout history, great civilisations have been built on stringent economic practices. The artist’s fictitious currency the ‘Gondruala’, shows mankind’s pursuit of money for survival and symbolises that ‘currency is king’.

Sadly, as we become one homogenous society worldwide, we risk losing our sense of heritage, our ‘value systems’, that have been handed down from generation to generation. ‘On Golden Soil’ is a celebration of our culture; self-discipline, forgiveness, humility, compassion and universal attributes that seem to have been lost on the modern world, and it is eating away at our livelihood”.

By Andrea Kemsley and Elsje Oosthuizen.

‘On Golden Soil’ will be hosted virtually and launched on Thursday the 28th of January at 10h00 SAST. Please visit the Christopher Moller Gallery website for more information, viewings will be available by appointment. On display until Friday the 19th of February 2021. 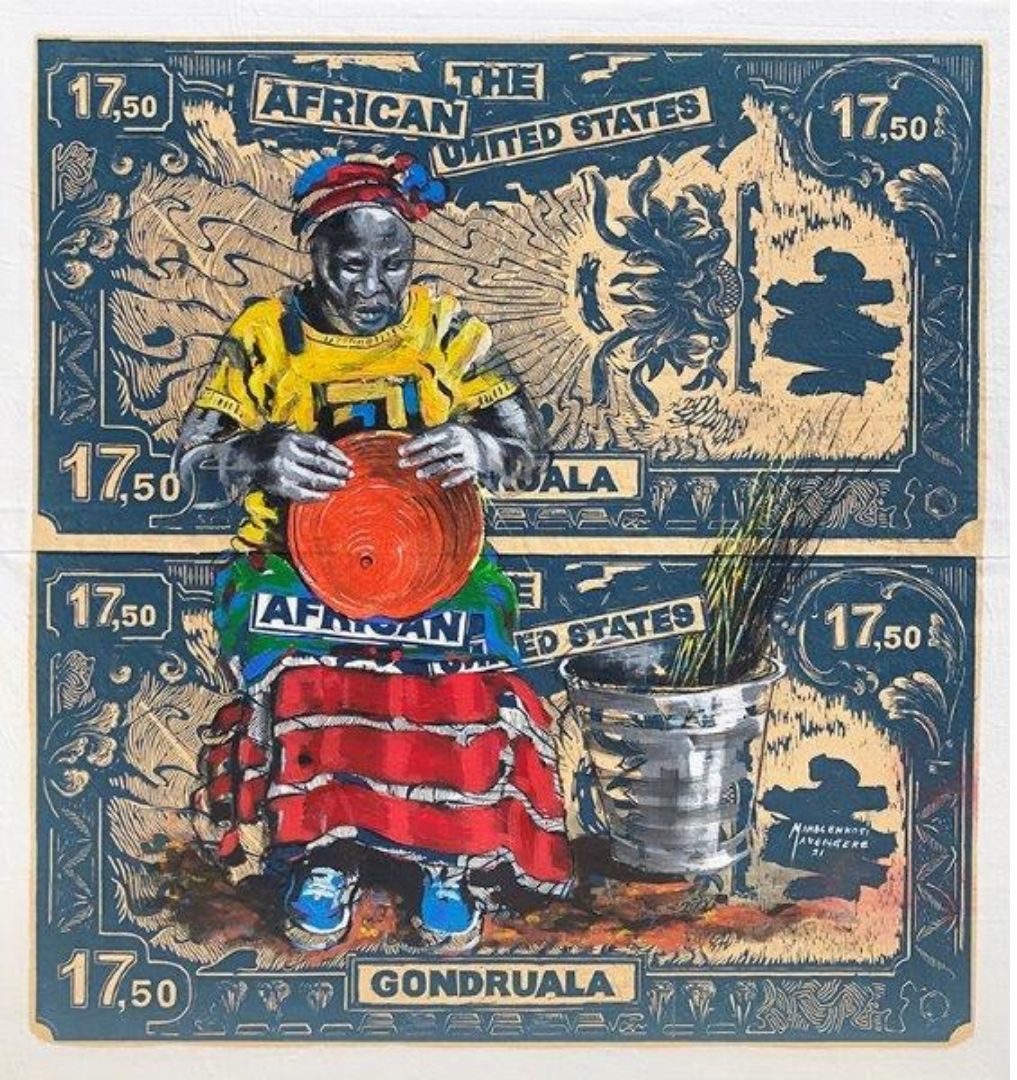 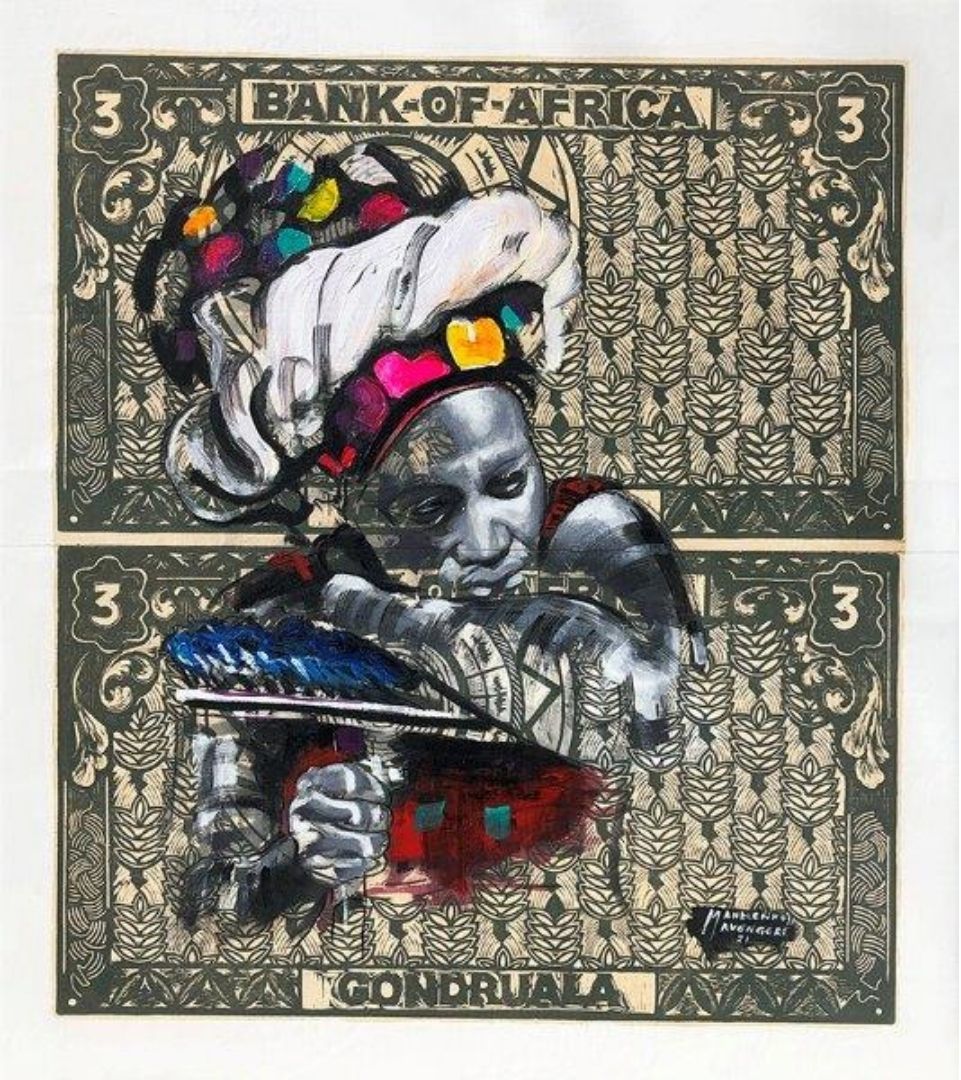