Exiting the plane at Charles de Gaulle I left I vital document in the pouch in front of my aisle seat, Robert Pogue Harrison’s book, Gardens: An Essay on the Human Condition. The loss would prove increasingly vexing while in Paris, a city whose exquisite gardens and tree-lined boulevards reminds one forcibly of the value of cultivation and ‘the gardener’s vocation of care’. For Pogue Harrison the matter was deeper still, for gardens – mythic or real – define the best in us, despite our unerring capacity for destruction. And so, to compensate for this loss, two days later I entered a bookshop that overlooks The Tuileries and purchased a copy of Ralph Waldo Emerson’s best loved work, Nature, despite the fact that another languished in my bookshelf in Cape Town. 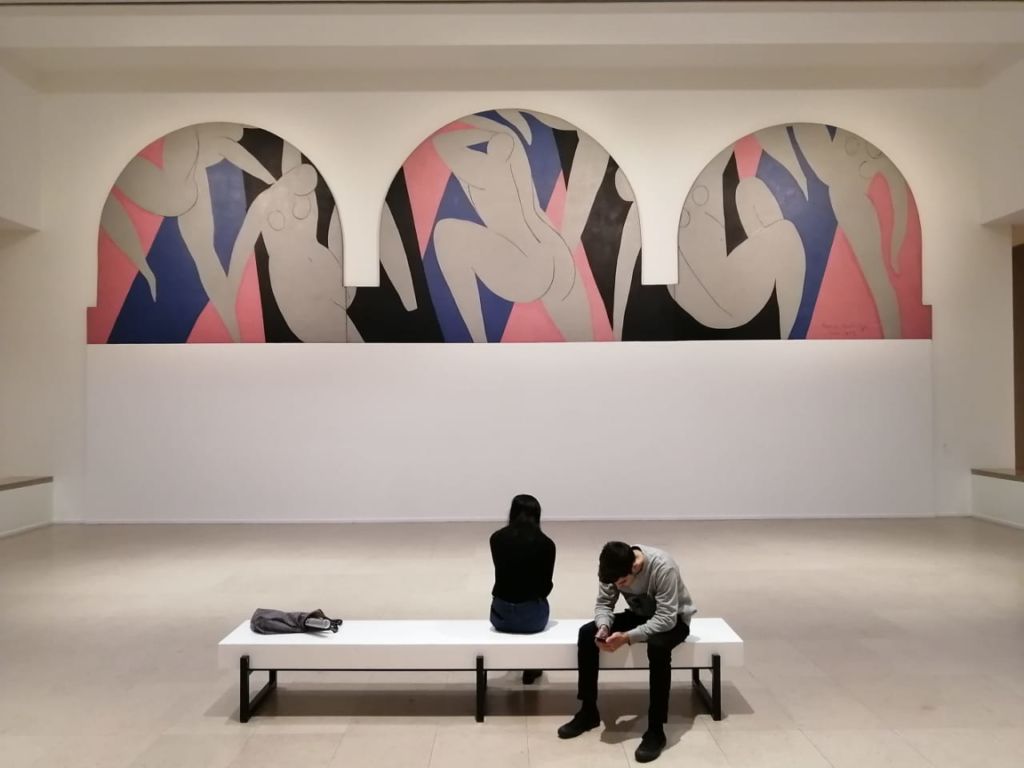 At night, after long days walking the streets of Paris, paying homage to its great museums – the D’Orsay, Louvre, L’Orangarie, Jeux de Paume, Pompidou – I’d reread Emerson, pausing as I recalled the force of the following words … ‘that nothing can befall me in life – no disgrace, no calamity (leaving me my eyes), which nature cannot repair. Standing on the bare ground – my head bathed by the blithe air and uplifted into infinite space – all mean egotism vanishes. I become a transparent eyeball; I am nothing; I see all; the currents of the Universal Being circulate through me; I am part or parcel of God’. 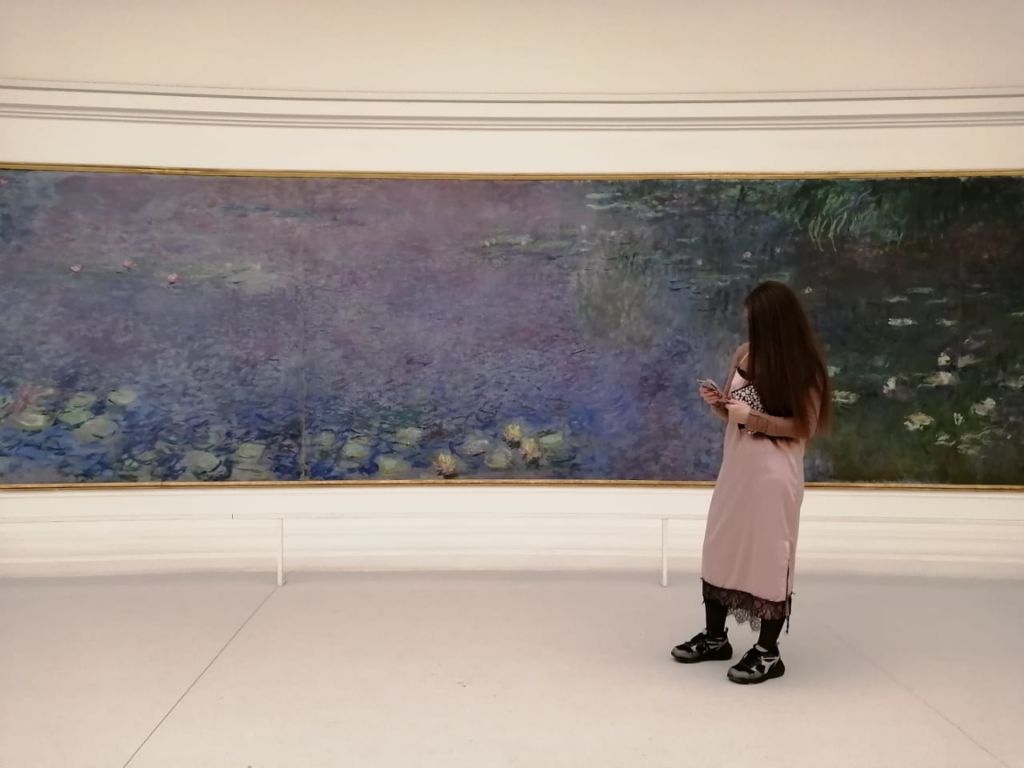 For the sceptic these are heady words. Not for me. In rereading Emerson, I understood what makes Paris unique. It is nature, human and otherwise. No city, to my mind, has better consecrated life as art, the natural world as a portal to the divine. It is Monet of course who stands at this portal, though he is not alone.
Monet dedicated his monumental paintings of water lilies to ‘those with nerves exhausted’, who could find calm by looking at his paintings and follow ‘the restful example of those still waters’. And there is no doubt, when seated before these paintings in L’Orangerie, that it is this calm which infuses one.

There is a caveat however, because we are caught between a ‘vocation of care’ and destruction. In short, we fail to recognise what is best in us and for us. Our eyes are not ‘transparent’ but afflicted by a perceptual glaucoma. We look, but we don’t see. Worse, our eyes are foreclosed by a very particular cataract – the camera lens. Everything we see is seen second hand, or not seen at all. The desire to place oneself before a painting and record one’s presence therein has become a plague. One doesn’t see Monet’s lilies one sees one’s grinning mug in front of it. I witnessed this hijack on thousands of occasions, most horrifically so at the Louvre in which people lined in droves to take a selfie in front of a heavily secured stage with the Mona Lisa at its epicentre. There were four other portraits of women which to my mind were equally compelling, yet no one stopped to linger there. 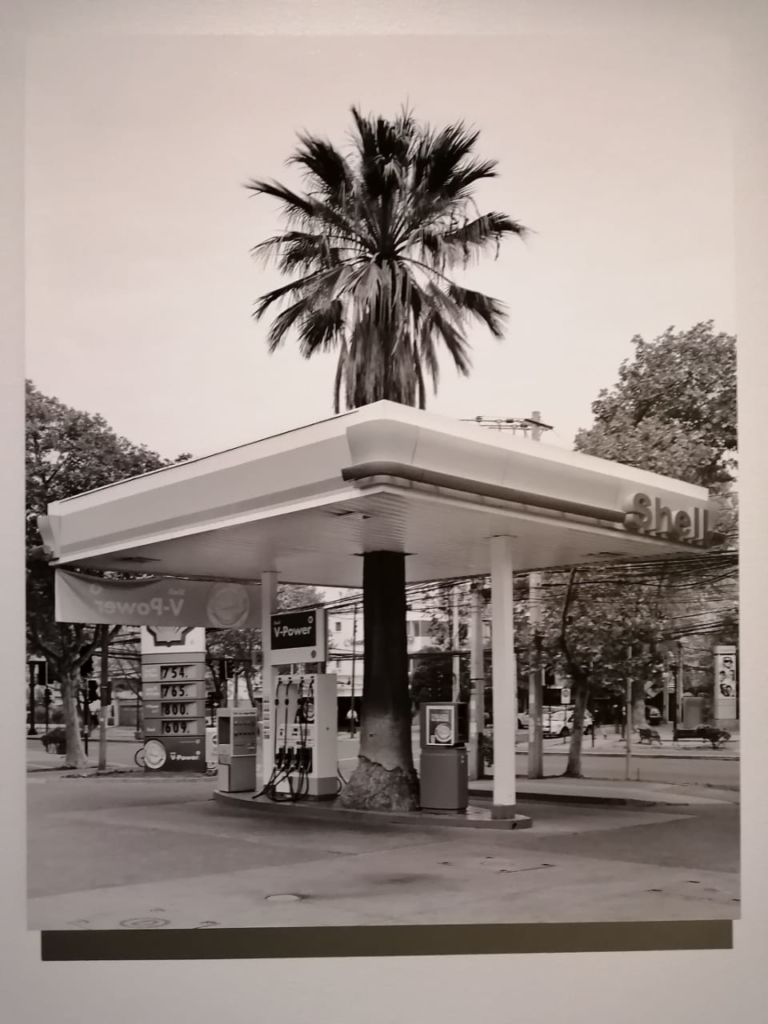 I was recently and intriguingly told that the first selfie occurs in Ridley Scott’s film, Thelma and Louise, a factoid I will revisit. Another, however, intrigues me more. That the selfie first came into being when a drunken Australian lout recorded his puke-strewn mug while lying smug and snug beside a toilet bowl. Whatever the truth – and these day’s truth has become dangerously relative – what is glaringly in evidence is our desire to find ourselves at the centre of things.
We must be seen to be, to exist, as players on histories ephemeral stage. Our mugs have become post its, as jaundiced and facile as a smiley face. Emerson’s ‘transparent eyeball’ is the antidote to this disease. How else are we able to allow the ‘currents of the Universal Being’ to pass through us?

‘Retrograde’ was the word directed at me by a chiding friend when I recounted the pleasures which a potentially pure apprehension of art allowed. A backwards move, the slur also carries a degenerate and inferior quality. I’m not sure I agree. Yes, Impressionism today is mistakenly perceived as kitsch. But to what end? Why is it that the great early modernists can be revered and yet, in the case of Monet, be simultaneously negated? Surely there is something wrongheaded in the long-standing valorisation of the New York centric Pop Art
and Abstract Expressionist movements at the expense of a Paris centric art dedicated to understanding the mysteries of nature, form, and light? Surely Emerson has a point in declaring that ‘When a man lives with God, his voice shall be as sweet as the murmur of the brook and the rustle of corn’? 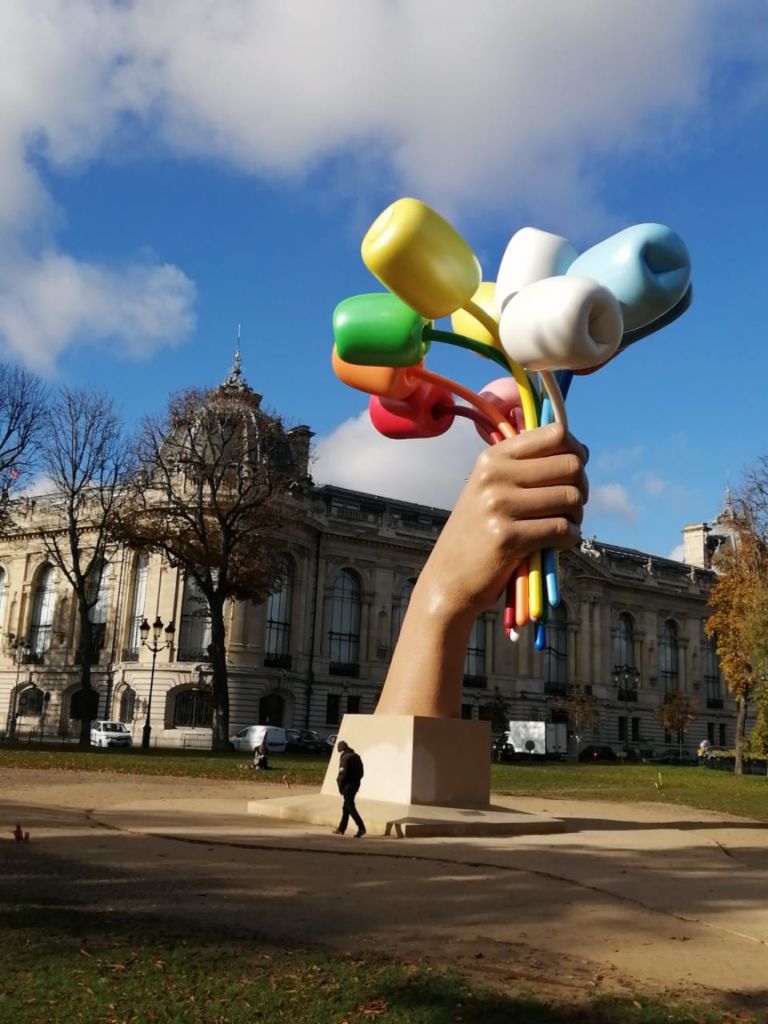 I am not a naturalist at the expense of the postindustrial tech centred world which consumes us today. These states are not mutually exclusive. It is just that, in Paris, I profoundly recognised the urgent need to restore the Rights of the Human and natural world. In a very different yet equivalent way, the fifth floor of the Pompidou also demonstrated the power of human insight untainted and unmediated by a technology that seeks to intercept and antedate that experience. I am not saying that tech does this per se. As the South African sound artist, Jenna Burchell, reminds us, tech can help us to understand the soul. She, however, is an exception to the rule. What we love today and choose to align ourselves with is our aridity. We are Nietzsche’s ‘Last Man’, complacent, smug, content to wallow in easy gratification and unfought for pleasures.

On the fifth floor of the Pompidou, however, another more genuinely experimental battle was waged. Here it was Matisse who stood at the portal. Matisse who understood Emerson’s recognition that ‘Nothing is so fleeting as form; yet never does it quite deny itself’. 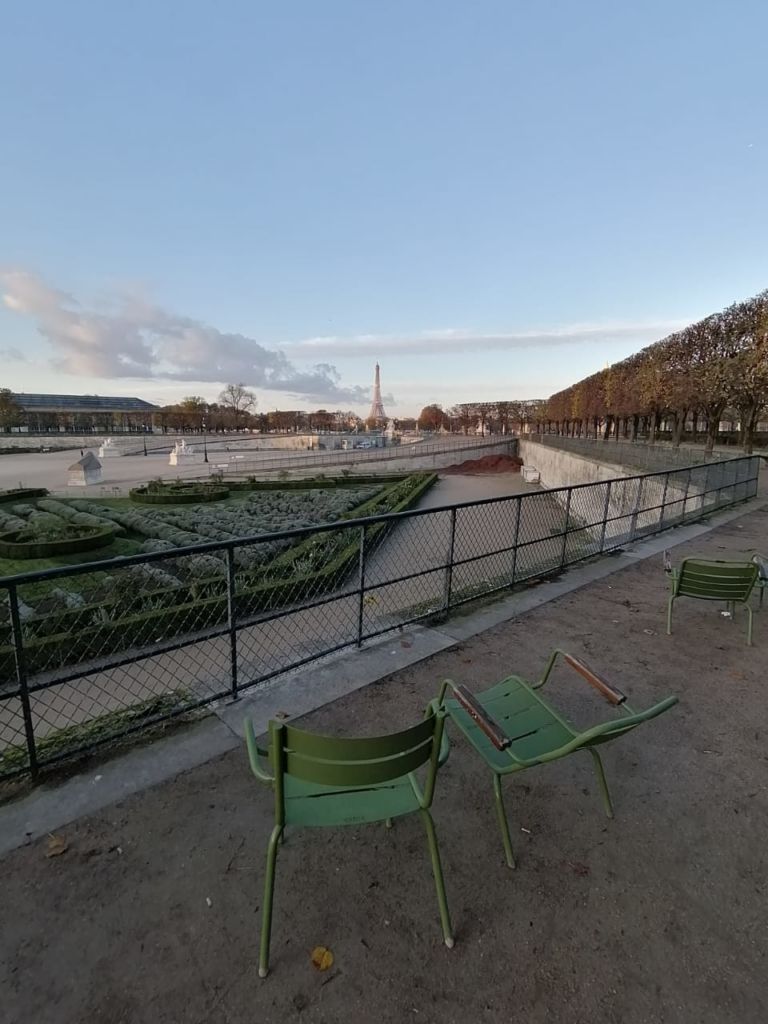 At the D’Orsay I overheard a debate concerning the relative merit of Monet and Matisse. The artists are markedly distinct, but the question reinforced the centrality of these two early modern artists in the Western imagination.
They are our Scylla and Charybdis, exemplary is their exploration of ‘fleeting form’. Both however stand on a ‘bare earth’, both, after Emerson, understand ‘A man is a bundle of relations, a knot of roots whose flower and fruitage is the world’. It is this profound connectedness which sticks and inspires us.

It is their joy and wonder which remains. At the Museum of Contemporary Art, which stands alongside Palais de Tokyo, I stumbled upon a shrine dedicated to Matisse. His dancing figures, painted in his 60s, possess a magical hovering momentary beauty which reminds us of what the eye can see and the body feel when given the chance to do so. Not all of life is about speed and instantaneity. The quick-fix is forgettable. What lingers longer is our ability to find a sacrament in the everyday. For while Matisse’s paintings or dancers, or Monets’ of water lilies, are vast in scale, they are also instances of the sublime caught in miniature.
As Emerson subtly phrases it, ‘Nature is a mutable cloud which is always and never the same’. The eternal exists in the instant. It is this realisation which Paris, with its watery thread, its gardens, arcades, market places, cobbled streets, and churches dedicated to art, so soulfully expressed.

A city is a living organism after all, and the Jesuit priest, Michel de Certeau, understood this all too well. It was heartening and reassuring to see someone reading his book as I raced through the city’s underground metro towards my pod, a bunkbed in a room which accommodated six strangers at the Peoples Hostel in Paris’s 12th precinct. Because, after long days of walking, and standing, and looking, one needs solace and quiet, and, in my case, a wedge of brie, bread, pulped juice, and vodka. 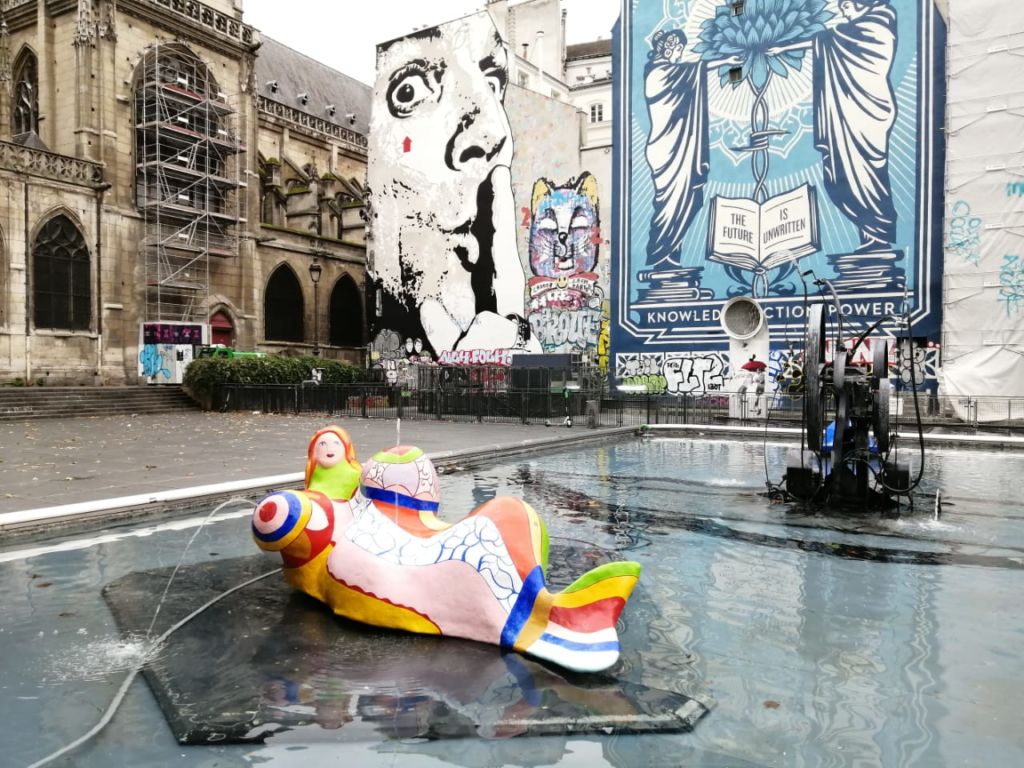 The encounters with artworks are too numerous to record. Besides, each of us has a very different take. What we single out is ours.
There were the requisite nineteenth century greats, Manet’s ‘Olympia’, Courbet’s ‘Origin of the World’, Gericault, Ingres, Delacroix.
However, Edouard Vuillard particularly drew me, if only because I was unaware of the extent of his gift. His ‘Portrait de Madame Frantz Jourdain’, painted in 1914, proved to be one of my most stirring encounters. I was wholly drawn in, captured by the light and the lady ruefully basking in it. Then again, I was also enraptured by Henri Martin’s ‘Portrait de mon Fils’, of a dapper man, coolly insouciant, in a glittering light-flooded path and garden.
I mention these glorious paintings to remind myself and the reader of the depth and breadth of the works on view, and the time it takes to truly see the little we can.

I never made it to the Rodin Museum and Sculpture Park, never saw his famous figure of ‘The Poet’, otherwise known as ‘The Thinker’. Nevertheless, contemplation was everywhere to be found. At 8am on a Sunday I found myself in the Tuileries before another adamantine figure, bent and caught in some excruciating agony. The affliction – psychic, emotional – was inescapable. Paris, after all, is a place of the ravaged mind and contested soul, the very heart of the battle in the Western world on behalf of the Rights of the Human.
Sculpted in marble by Henri Vidal, the figure stood starkly cut out against a clear blue sky.
And, in that moment, I recognised myself, my pain, my fears and regrets, but, most of all, my will, in the midst of darkness, to thrive, move on, engage, love. For as Emerson has sagely reminded us, ‘The reason why the world lacks unity, and lies broken and in heaps, is because man is disunited with himself. He cannot be a naturalist until he satisfies all the demands of the spirit. Love is as much its demand as perception. Indeed, neither can be perfect without the other. In the uttermost meaning of the words, thought is devout, and devotion is thought. Deep calls unto deep.