Pierneef, A Passion for Landscape

Pierneef, A Passion for Landscape

Enormously prolific, the artist was equally comfortable working in oils, gouache, watercolour and casein, while the prints he produced, both linocuts and etchings, remain as influential as they are collectable. More than 50 years after his death, his works are still among the top selling works on auction, in demand locally and internationally.

Jacob Hendrik Pierneef was born on the Highveld in 1886 and attended the Staatsmodel School in Pretoria, but the family went into exile in Hilversum, in the Netherlands, during the Anglo-Boer War. A young Henk was afforded late-night lessons in architectural drawing, and continued to refine his line, rely on his observation, and improve his accuracy in the conventional, no-nonsense classes at the Rotterdam Academy. After returning to Pretoria shortly after the May 1902 peace and completing a last year at school on Esselen Street, the teenage Pierneef began working at Lodewijk de Jager & Co, the tobacconist on Church Street West, late in 1906. 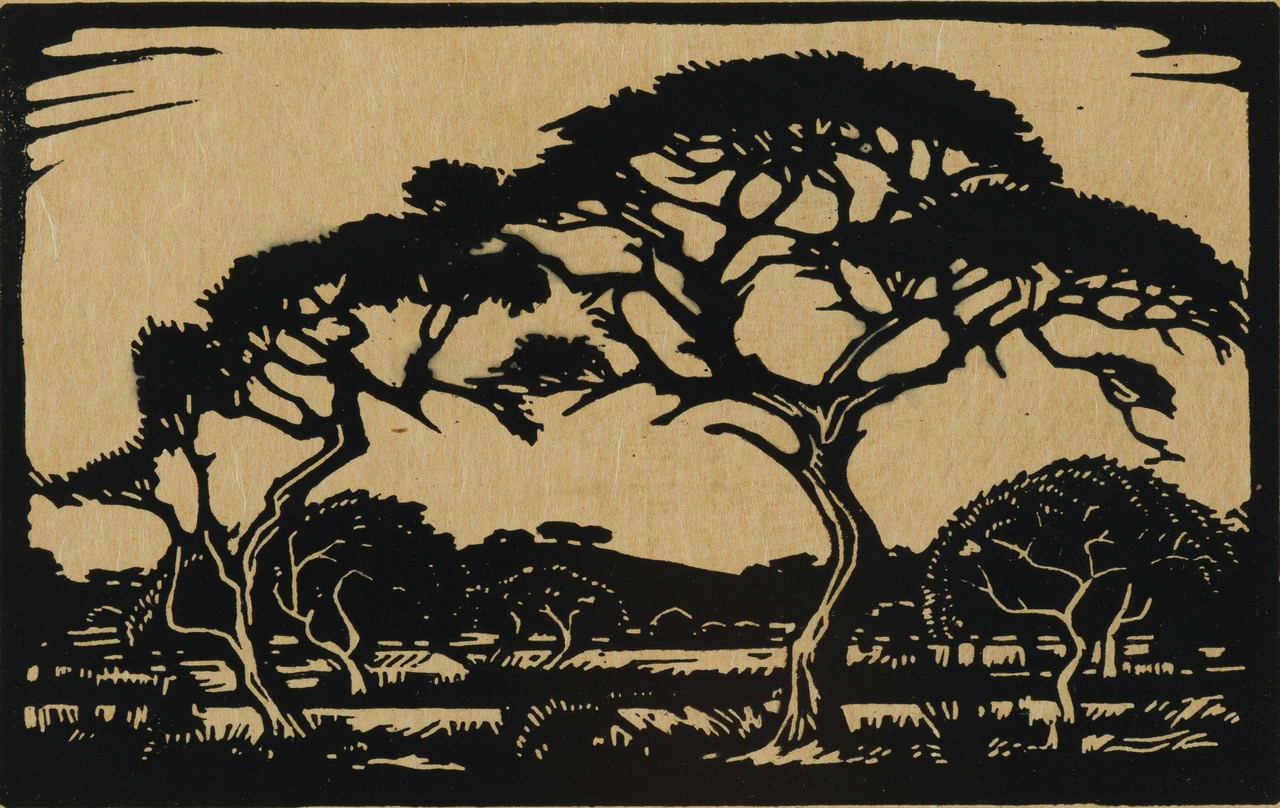 From the 1920s onwards, Pierneef began working as a full-time artist. He exhibited frequently, sold well, lectured continuously, and served on numerous selection committees. He held shows in all the major cities in South Africa and, in 1947, and even contributed an apparently beautiful end-paper for the 25 private leather-bound guides given to King George and his retinue during the visit of the Royal Family.

Regarded as a national and cultural treasure, Pierneef’s time was in much demand in the early 1950s. The modest contemporary market meant he had little option but to exhibit widely and regularly. No fewer than eight major shows opened between 1950 and 1952, and gallery-goers were able to enjoy his work in Johannesburg, Pietermaritzburg, Cape Town, Pretoria and Bloemfontein. Pierneef died in Pretoria in 1957, at the age of 71, after a long and productive career.

Few South African landscape paintings are as dazzling, as evocative, and as memorable as Pierneef’s bushveld scenes. No other scene was more inspirational to the artist, and no other subject closer to his heart. In some compositions, one gets a sense that he has summoned all his powers of compositional design, all his sensitivity for subtle colour harmonies, and all his flair for the grand and the dazzling. 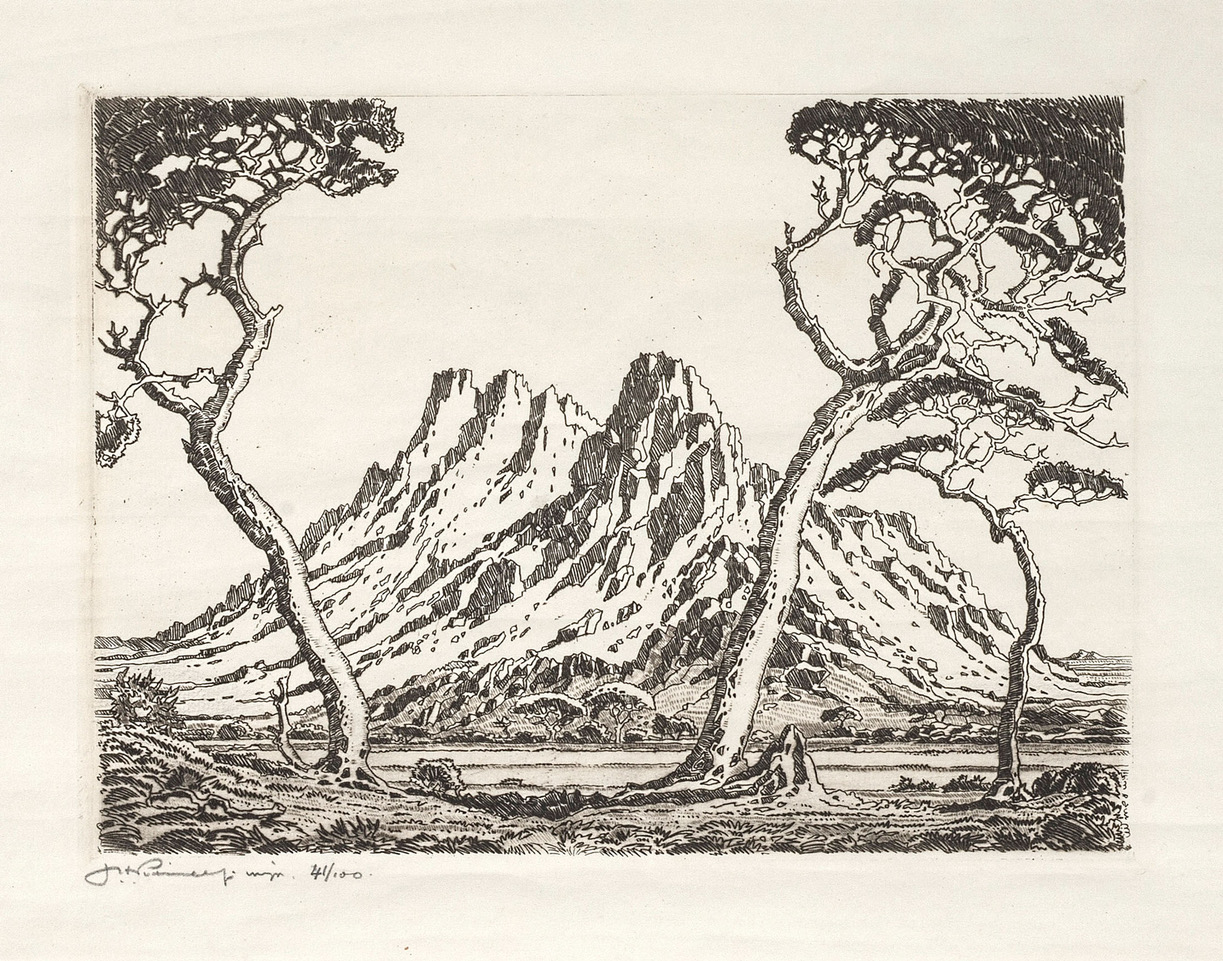 Painted in 1950, the landscape Bushveld Game Reserve (lot 557, Strauss & Co, May 2020, sold for R 2 276 000) is part of a theme and body of work which occupied the artist throughout his life. These works from the 1940s and 1950s have certain formal compositional similarities but retain their unique distinctions, some with marked variations on that theme, particularly sensitivity to the particular vegetation and season in which the work was painted.

George Smithard introduced JH Pierneef to Japanese woodblock prints when he showed the young artist the ropes of the linocut printing and etching techniques. The artist also studied etching at the Rotterdam Academy and possibly experimented in printmaking with fellow artists Frans Oerder and Pieter Wenning back in South Africa.

Artists’ prints and works on paper usually sell for much less at auction than the large oils on canvas and so they can be an accessible entry point for novice Pierneef collectors. On occasion though, rare examples in pristine condition sell for prices well above their initial auction estimates. The etching Okahandjaberg sold for close to R80 000 in 2019 (lot 453, Strauss & Co, February) and the linocut Doringboom, Potgietersrust unusually realised over

THINKING OF SELLING? WHAT IS YOUR PIERNEEF WORTH?