Recently Discovered Fresco Goes on View to the Public in Pompeii

Recently Discovered Fresco Goes on View to the Public in Pompeii

A significant work excavated in Pompeii last year is going on public view for the first time in the ancient city. The Guardian reports that the “well-preserved” fresco depicting the Greek myth of Leda and the swan was discovered during excavations of an area of the archaeological park called Regio V. The domus in which the fresco is situated and the Via del Vesuvio, where the townhouse is located, have reopened.

The story of Leda and the swan was a fairly ubiquitous subject for dwellings in Pompeii and Herculaneum, both of which were leveled when Mount Vesuvius erupted in 79. In the myth, the Greek god Zeus takes the form of a swan and seduces Leda, a mortal princess. (Some versions of the myth say that Zeus raped Leda.) Leda is said to be the mother of some of Zeus’s children, as well as those of the king of Sparta. Her reach also extends to other Greek mythologies: she was said to be the mother of Helen of Troy, along with the twins Castor and Pollux.

The fresco depicts a mostly nude, seated Leda with a swan atop her. Archaeologists believe that the owner of the domus in which the fresco resides was likely a rich merchant eager to convey his sophistication to visitors.

It has not yet been determined when the Regio V sector will be entirely open to the public. The extensive dig, which is supported by the European Union–funded Great Pompeii Project, has also yielded frescoes depicting sparring gladiators, human skeletons, and the remains of a horse and saddle…Read More 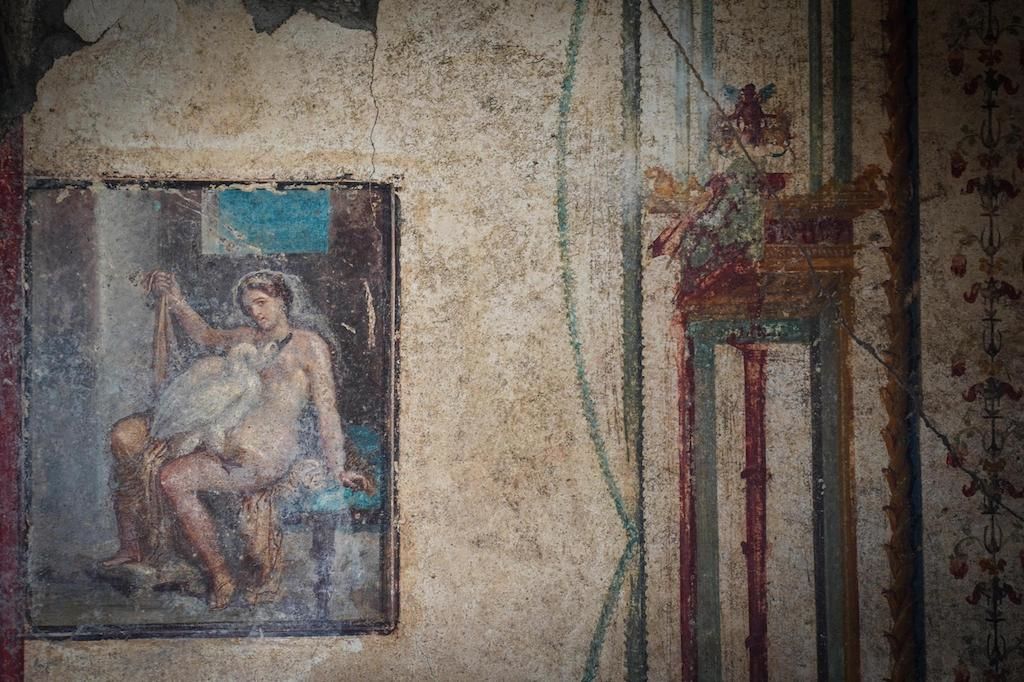 “Leda and the Swan” fresco in Pompeii.
CESARE ABBATE/EPA-EFE/SHUTTERSTOCK