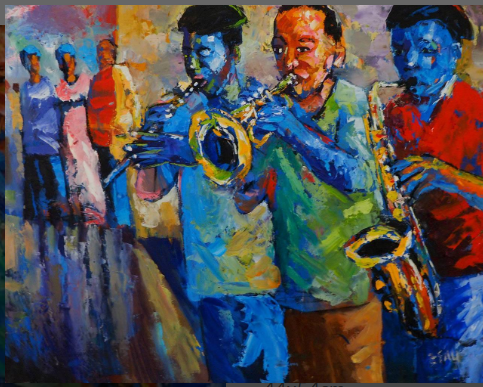 Sandy Esau was born in 1968 and raised in Darling. He came from a creative family and studied art at Ruth Prowse School of Art, under Eric Loubser and Ryno Swartz for two and a half years. He was guided by Judith Mason at Dal Josafat Missionary Station where he also studied. After his studies he worked as a fisherman and also at Koeberg Nuclear Power Station while continuing to paint. His first solo exhibition was in Darling during June 2001.

In 2007 one of his works was auctioned for R 55 000 at the Greef ‘Road of Hope’ Gallery, where Mr.Trevor Manual was the host. Esau’s work hangs in the boardroom of Mercedes Benz in Gauteng, and in 2002 he won a national art contest at the World Summit on Sustainable Development held n Johannesburg. The works were enlarged to billboard sizes and put onto buildings during the Summit.

In 2009 Esau was devastated by a fire which destroyed his paintings, materials, studio and home. Although this was an overwhelming loss for the artist and his family, Sandy Esau continues to paint. He still lives in his home town of Darling with his wife Natasha, three girls and a boy.

He took part in an ANC fundraiser, where the piece “After School” raised R90 000.
Esau painted the community around him. He was inspired by Monet and Van Gogh and everyday life as he saw it. He worked in mediums such as oil on canvas, oil on superwood, pastels and mixed media on paper.

“I paint my community around me, the houses, the dorp with it’s ‘Stoepsitters’, the shop fronts, the bar, the dancers, Nguni Cows, Cape Coons, Children, my family and friends and the every day life around me.”
– Sandy Esau

See more of his work at The Cape Gallery capegallery.co.za 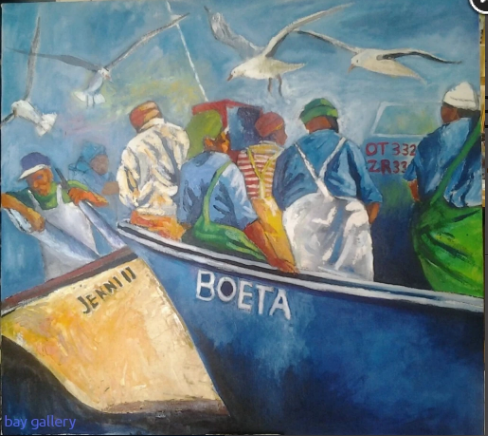