There are few places you can get a broad overview of South African art that covers a century in one place.  Least of all would you expect to see something like this in Bellville.  The Sanlam Art Gallery’s exhibition, Centennial: A Century of South African Art from the Sanlam Art Collection 1918 – 2018 does just that.  Compiled by curator Stefan Hundt from the 2000 strong Sanlam Art Collection, this exhibition showcases celebrated historical works by artists such as Maggie Laubser, Irma Stern, Gerard Sekoto, JH Pierneef, Sydney Kumalo, Cecil Skotnes, Gladys Mgudlandlu and Stanley Pinker alongside more contemporary pieces and installations by, Elza Botha, Diane Victor, Ndikumbule Nquinambe, Dumile Feni, Pauline Gutter, Adam Letch, Jan van der Merwe and Gavin Younge to mention a few of the artists represented.

The narrative of political and art historical transformation from colonial hegemony and its aesthetic conservatism, through the years of cultural isolation and state sponsored political repression, to the establishment of a democratic order in South Africa, are represented by key images in this exhibition.  Beginning with early Impressionist-styled landscapes by Pieter Wenning and Hugo Naudé around 1918, through to the late 1940s the transformation in art is marked by the expressive works of Maggie Laubser, Irma Stern and Gerard Sekoto and the formalised landscapes of JH Pierneef.  Abstraction dominates from the early 1950s to the 1970s represented by Kenneth Bakker, Sydney Kumalo, Ezrom Legae, Christo Coetzee, Walter Battiss and Cecil Skotnes.  The 1980s sees artists challenging the politically repressive Apartheid state.  Works by Elza Botha, Paul Emsley and William Kentridge at first seem conventional compositions of landscape, figures and collaged cut-outs on closer inspection reveal to be visual allegories on the state of the nation.  From 1991, the unbanning of the ANC and political parties; the establishment of a democratic state in 1994 and following through to the next Millennium, artists engage with broader social dilemmas growing out of a
free but economically unjust, violent and patriarchal society. 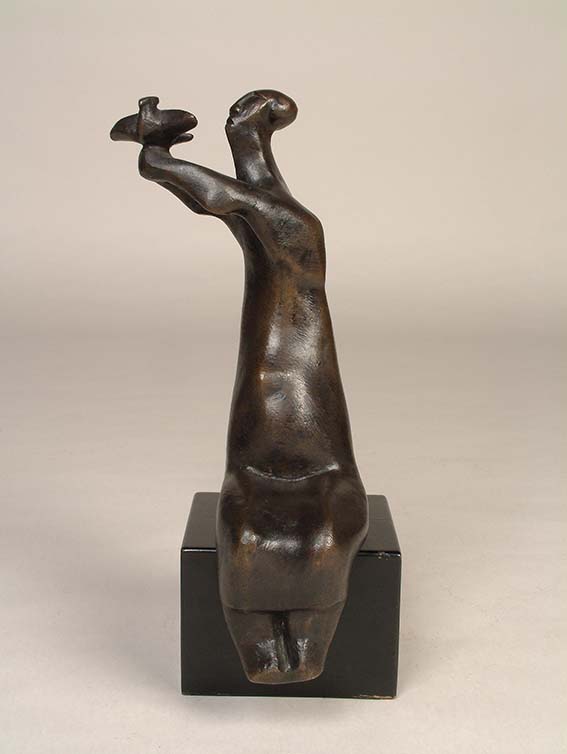 Jan van der Merwe’s Gaste, 2004, with its repeating gunshot served up as dinner, Diane Victor’s Disasters of Peace 2000 (ongoing) and Pauline Gutter’s Their Last Supper 2007 make direct reference to the disintegration of societal norms, corruption and the disintegration of the rule of law.  In contrast Ndikhumbule Ngqinambi’s Walk of Numbers 2010, reflects on the resilience of people struggling towards their freedom and salvation while Richard Mudariki’s The Model
presents an ironic view on the “Rhodes must fall” Saga some three years ago.

This selection from the Sanlam Art Collection provides many opportunities for the viewer to engage with some of the most interesting images produced in South Africa over 100 years.  The diversity of the quality artworks on display makes this a landmark exhibition not to be missed.

Sanlam commenced building an art collection in 1965 and has continued to acquire significant images in all contemporary media.  The collection can be seen at 14 different locations in Sanlam offices in the Western Cape and Gauteng.  The Sanlam Art Gallery at the Sanlam’s head office in Bellville is the primary exhibition site for the Sanlam Art Collection and is open to the public on weekdays from 09:00 – 16:30 or by appointment with curator Stefan Hundt.

Centennial: A Century of South African Art from the Sanlam Art Collection 1918 – 2018 coincides with the company’s celebration of its centenary year.  The exhibition will be on view at the Sanlam Art Gallery until 24 August when an edited version will move to the Sanlam Art Lounge, at 11 Alice Lane, Sandton Johannesburg where it will be on view from 5 Septmber 2018 until 15 December 2018.