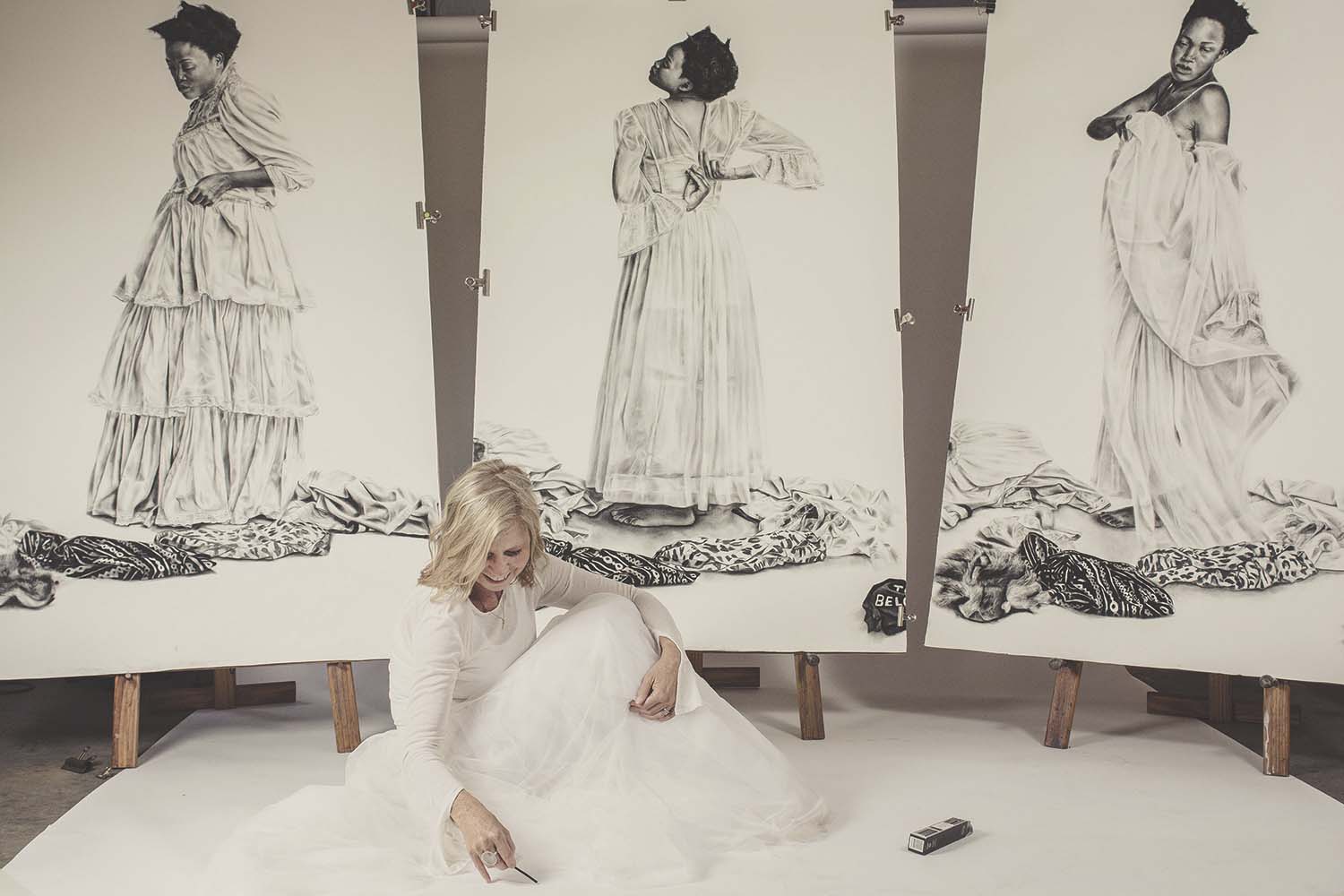 The ManzArt team is honoured to present Marié Stander’s sixth solo show, opening a week prior to the month of Art Franschhoek on the 20th of October 2018 and running throughout this prestigious event.

Marié joined our stable of artists with her first solo show over a decade ago and her latest drawings will go on show at ManzArt in Franschhoek from the 20st October
2018 onwards.

Best known for her figurative charcoal drawings, Marie’s new show will take over the main exhibition space in our gallery on the main street in Franschhoek with an impressive nine large scale near life size drawings of her new body of work, entitled the ‘…to belong..’ series.

A very intimate approach toward an appreciation of the female figure, the female struggle and the female power, the sheer beauty and immense energy – not to be missed. 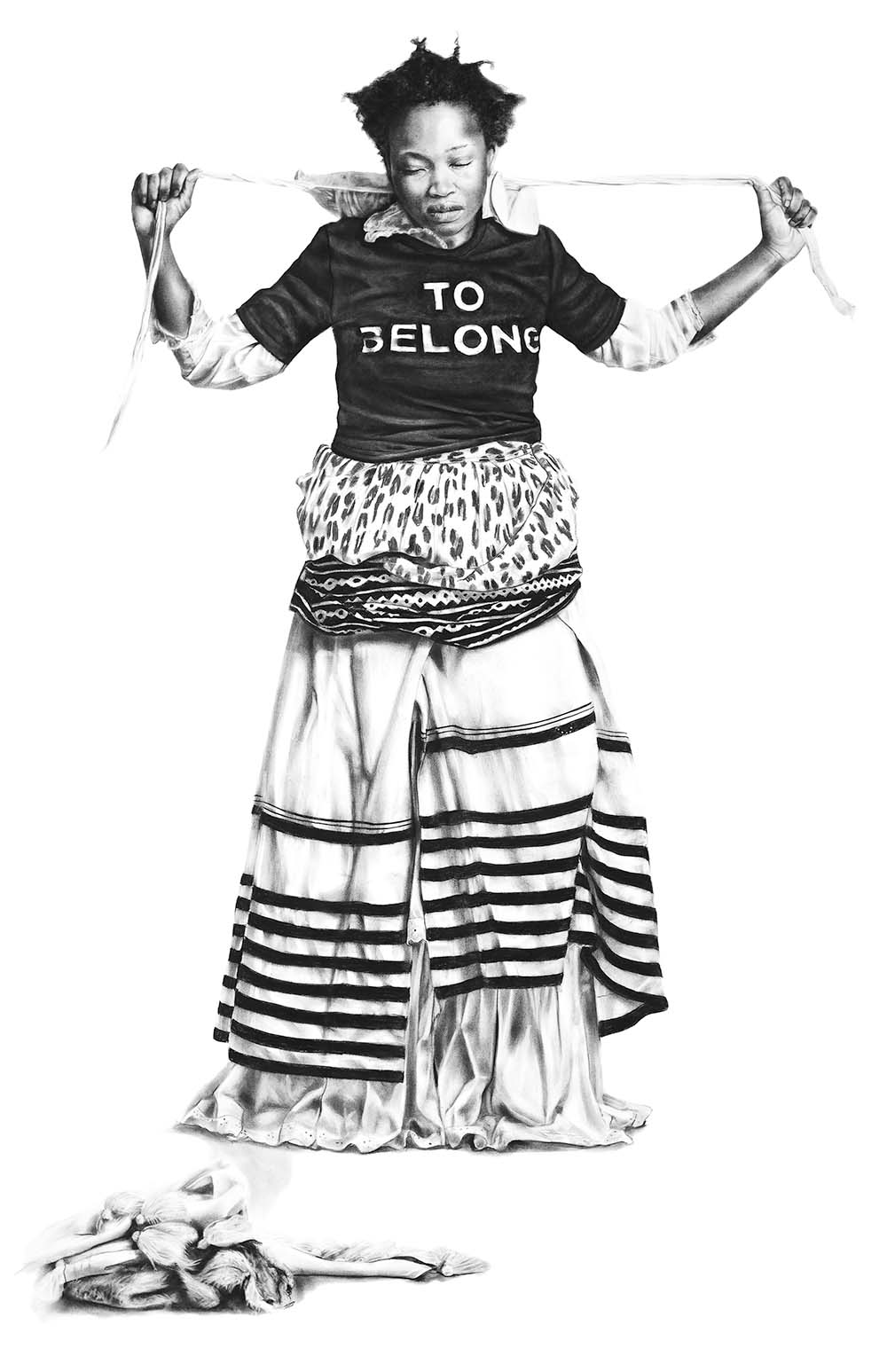 Marie’s solo is based on a theme which she explored over the past few years. It has manifested itself in different, but similar themes. From the work “Stripped”, to the series of “Khimati with Noa’s dove”; all revolving around the concept of displacement.

This concept is reaching its highpoint and finale with this solo show “to belong” in this series of 9 works where Khimati is stripping herself from all her multi-cultural clothing in a quest to find her roots and identity in our hugely complex country, South Africa. Stander chose different multi-cultural clothing from the South African history to symbolize this search for belonging. She specifically uses clothes to communicate this, because for Marie, clothes are an extension and expression of herself, a reflection of her identity and her history. This in a way it explains not only her beliefs, but also her hopes and her political allegiances. 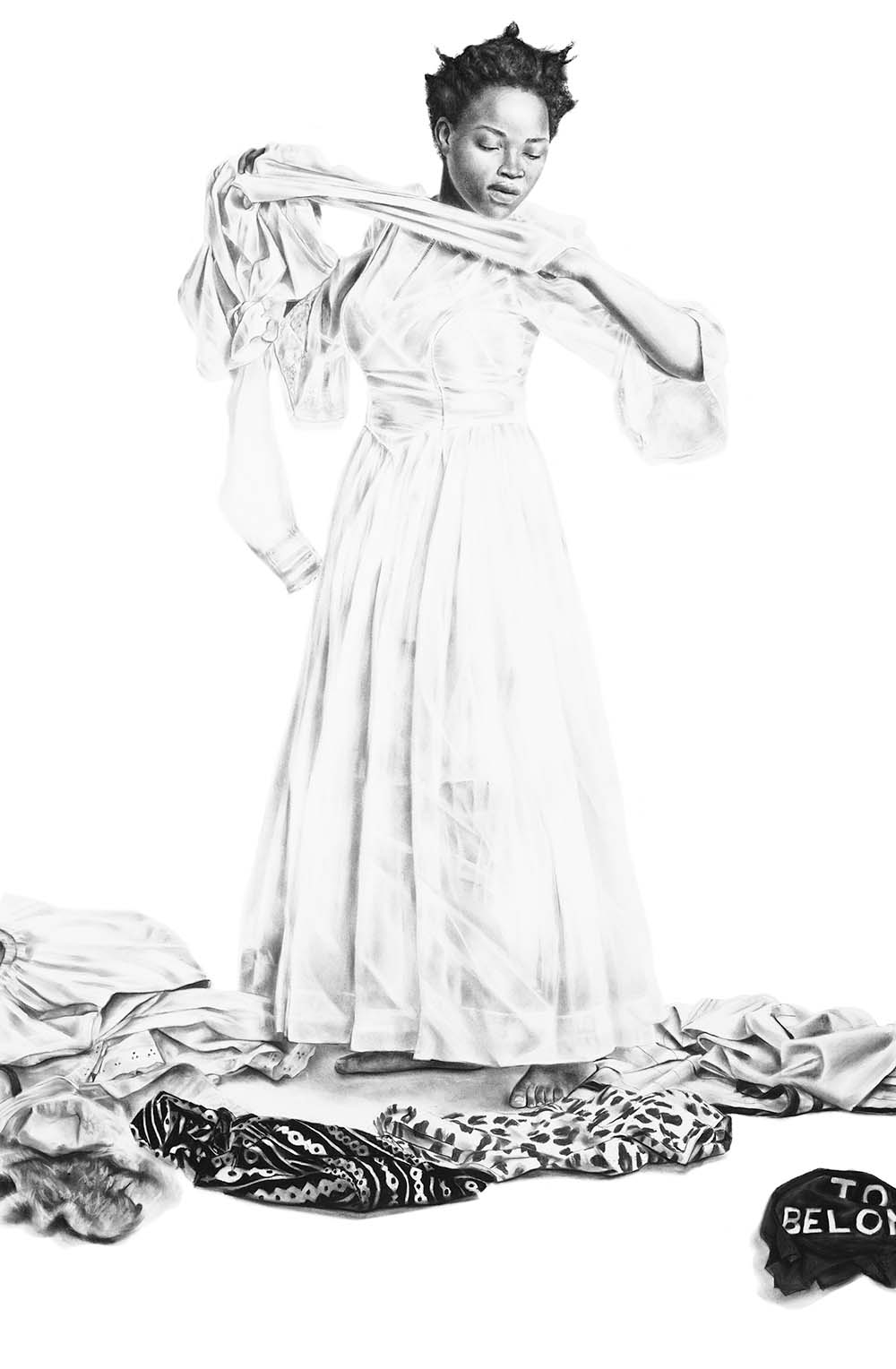 In the process of stripping herself from all her historical reference to near nakedness, the model, Kimati, shows vulnerability, but also strength and sensuality. A woman searching, but also standing strong and reflective to what she was and what is to become, as a symbol of an universal woman, rooted and living in this country….

Unsurprisingly Marié Stander has a large and an ever growing following throughout South Africa’s collector community and throughout the world – her works can be found in most of the main African corporate and private collections and many international contemporary art collections. The prestigious Sanlam Private Collection acquired several of her works.

Marié’s work was previously submitted for the national portrait award in the UK.

Marie Stander is a finalist in the top 40 from the national Sanlam SPI competition – and the artist also had the great opportunity to produce a portrait commission for Archbishop Desmond Tutu.

The show will also incorporate the ‘Onse Mense ii’ book, Afrikaans poetry and Marié’s works in a beautiful format – an ideal little present. This book is already Marié’s second book after her sell-out first ‘Onse Mense’ book. Signed books will be available at the opening and as long as stock lasts.