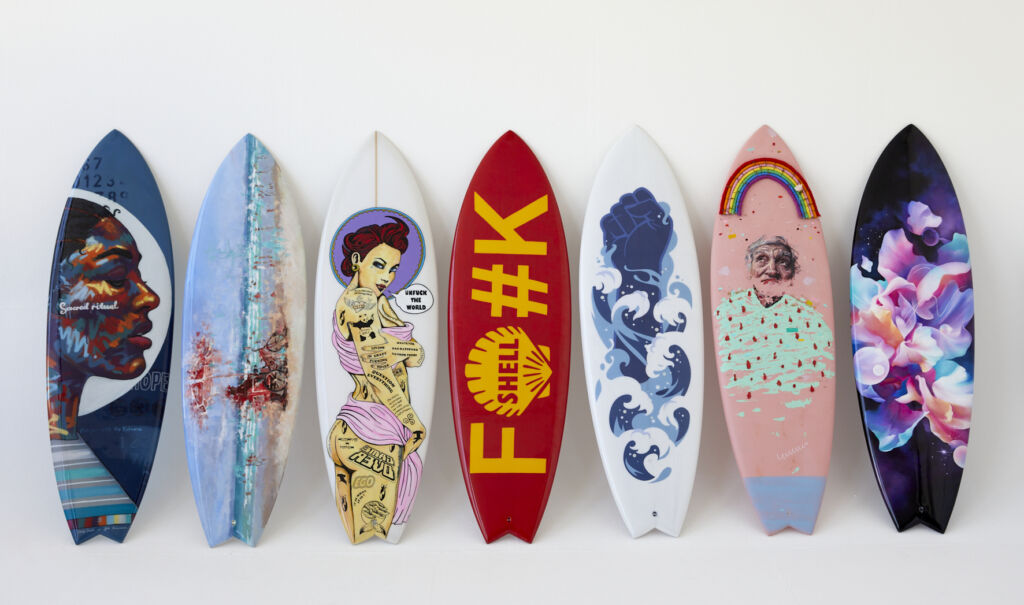 A surfboard by Cape Town artist Richard Joshua fetched a near-record R115,000 during a comedy-filled charity auction at the Wavescape Surf and Ocean Festival last night.

Comedian Nik Rabinowitz had the crowd in stitches while goading bidders into making ever higher bids for eight surfboards that raised a total of R301,000 for a range of ocean charities at Jack Black’s Taproom in Cape Town.

Joshua’s horizontal painting in the style of abstract realism depicts an ice-cream seller on the beach at the Strand near Cape Town. His artwork almost trumped the surfboard painted by Kirsten Sims that sold in 2018 for R130,000.

Joshua, who is well known for the way he uses bright colours and patterns to draw cultural and historical references from his work, said he was very nervous when he saw his painting was the last board in the lineup: “I thought to myself that if my board fetched R12,000, I would be happy. But it was exhilarating to see it go all the way to R115,000.”

Artists invited for the 2022 Wavescape Artboard Project took the theme rejuvenation to heart, with Brett Murray emphatically expressing that sentiment in his strongly worded surfboard Fuck Shell that hit out at the seismic survey that Shell Oil tried to conduct off the East Coast … but failed.

The Wavescape Artboard Project initiative has raised more than R7 million for ocean causes over the years. This year, all proceeds will be donated to the NSRI, the 9Miles Project, the Beach Co-op and Shark Spotters.

The penultimate event of the festival takes place tonight, Thursday 10 March, in Kommetjie and tomorrow Friday 11 March, a VANS film night of movies takes place at The Shred, which closes the festival.

Go to Quicket.co.za to book your tickets!

A second screening of “Girls Can’t Surf” has been announced for 15 March at the Labia, tickets are also on sale at Quicket.co.za.

For more information go to www.wavescapefestival.com

See the lineup below and check out www.wavescapefestival.com