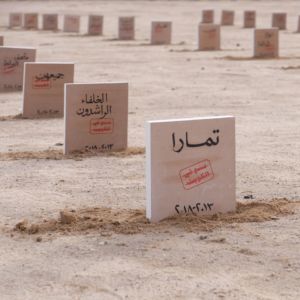 A few months ago, a list of more than 4,300 books banned by the government in Kuwait surfaced on Twitter. Back then, I was still living in New York and the only thing I could think to do was to create an artwork as a reaction to these arbitrary bans, which I believe to be an unacceptable level of censorship.

When I moved back to Kuwait around the beginning of September, I noticed that activism around the subject was inconsistent—it kept coming and going from public platforms. …Read More

Pictured: The Cemetery of Banned Books (2018) in Kuwait Courtesy of Mohammad Sharaf